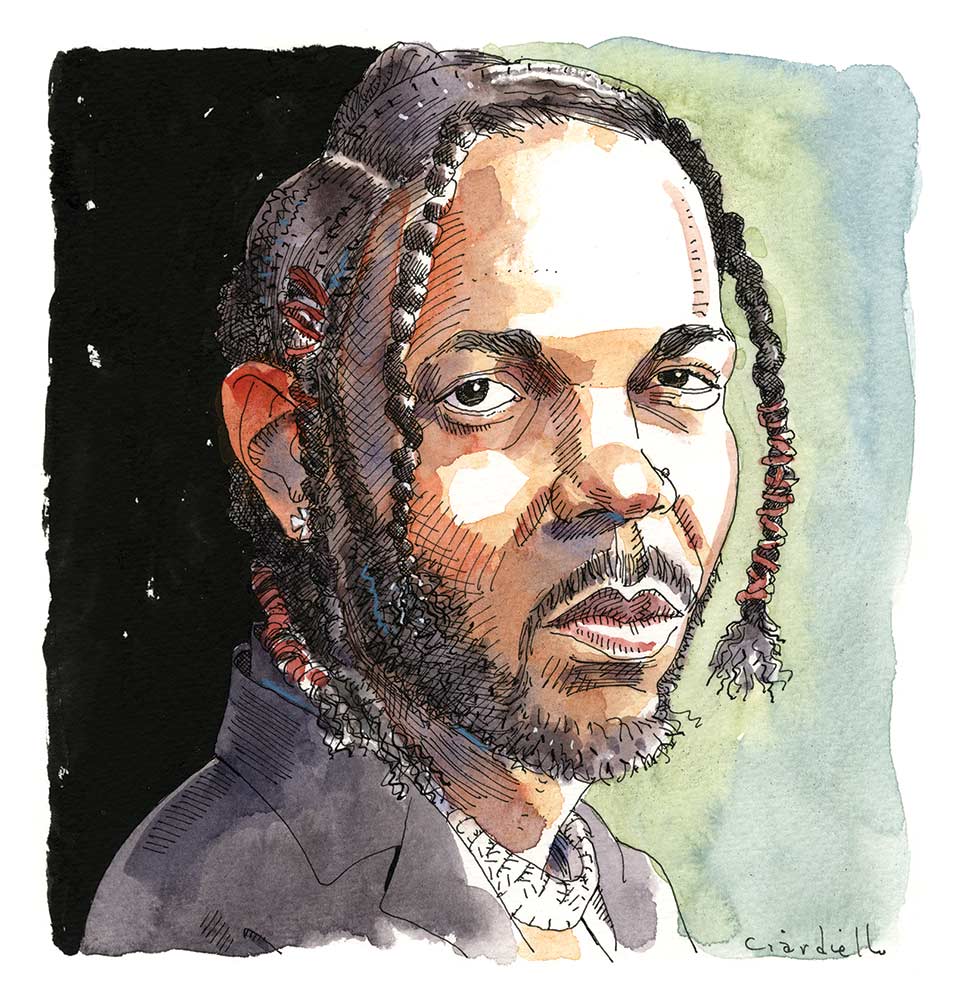 ≠What do you call a group of people united by grief? A family. Or at least that’s the formulation that has been dancing through my mind as I pondered where to begin. This is, after all, the frame that Kendrick Lamar offers from the outset on his long-awaited fifth album, Mr. Morale and the Big Steppers. When my friend Tim and I talked about the record, he told me that he’d misheard its title as “Mr. Morales and the Big Steppers,” which sounds like the name of a late-’70s family band that I would love. Later that day, in my group chat, another friend, Kyle, shared the abstract of a paper that he’d just presented, in which at one point he says something like “What’s important to remember is that funerals are also reunions.” I hear these lines on repeat, resounding in the background as the beat builds, while I play Kendrick’s album, trying to find a foothold.

A little context: My entry point into Lamar’s oeuvre was back in 2012, when a friend sent me a link to “The Heart pt. 3,” which didn’t remind me of anything I’d ever heard before. It was a short trip from there to one of his earlier projects, Section.80, and “Kush and Corinthians” in particular, which met me in the middle of a crisis of faith that felt like my own personal apocalypse.

In the music, I encountered a young poet, full of fire, wrestling with the same sorts of questions—about grace, loss, eternity—that surrounded me. I heard a man trying to make a choice between love and the law and always doing his best to choose the former—no matter the cost.

The cover image of Mr. Morale and the Big Steppers, which was made public before the music, features Kendrick with his fiancée and two children. The crown he wears is all thorns. At first I was tempted to read this as a reference to kingship, a familiar trope for the artist. But now I think it has more to do with a vision of parenthood as sacrifice. And a vision of life on Earth in which we can experience the end of the world, sometimes more than once, and yet live.

The opening track of Mr. Morale and the Big Steppers, “United in Grief,” begins with an echo looming over us to establish the general atmosphere: “I hope you find some peace of mind in this lifetime.” Then another voice, not yet Kendrick’s, follows that affirmation with a prophetic imperative: “Tell them / tell ‘em / tell them the truth.” Then the first echo again, but with a slight variation, moving from the level of the individual psyche to that of otherworldly, utopian striving: “I hope you find some paradise.” To round out this ensemble of voices, we hear the man himself around 30 seconds in:

A quick bit of accounting clarifies that the 1,855 days in question refers to the period between Kendrick’s last release, 2017’s Pulitzer Prize–winning DAMN, and the project we are now listening to. This has been a period, our protagonist tells us, marked by trials and tribulations so severe they required (apart from the rare guest feature on other people’s tracks) all but absolute silence.

Over the course of the 19 songs that constitute this double album, we come to learn not only the details of the “something” Kendrick has been going through but also who has been on that journey with him: his partner and his daughter and his newborn son; his new therapist; and his cousin Baby Keem (who appears several times on the album, making his presence felt with a star turn on “Savior”). Beyond these members of his inner circle, Kendrick has been on this journey with a number of loved ones who enter the frame only via the kaleidoscopic lens of childhood memory.

More than once, Kendrick’s accepted opening charge to tell the truth brings us back to this space: one marked by triumph, regret, and, most vividly, education. Here’s a sequence from one of the album’s standout tracks, “Father Time,” that illustrates this point:

I come from a generation of home invasions and I got daddy issues, that’s on me
Everything them four walls had taught me, made habits bury deep
That man knew a lot, but not enough to keep me past them streets
My life is a plot, twisted from directions that I can’t see

The triple entendre in the song’s title reappears here, at the end of its first verse: The phrase “Father Time” is, simultaneously, a familiar idiom, a reference to the specific stretches of time Kendrick spent with his own father, learning the various lessons the song elaborates in detail, and an almost religious vision of time as an entity that acts upon us consciously, turning each individual life into a “plot,” a work of literature, cinema, music, or some unwieldy, chimeric combination of the three.

Just as Kendrick cannot shake the indelible influence of time, he cannot undo the effects of his father’s instruction. That antagonism enters the song at the level of lyric as “daddy issues,” a phrase he repeats. This umbrella term is meant to stand in for behaviors as varied as fistfighting in the street, hesitating to express affection, or jumping up after a skinned knee without shedding a tear or making a sound (“‘cause if I cried about it / he’d surely tell me not to be weak”). And though there is a certain critique of normative masculinity one can offer here, what is much more interesting, I think, is the fact that for Kendrick these memories are presented as part of a legible tradition, one born of specific material conditions (Black generational poverty in the modern city) at a particular moment in history (Compton in the ’90s), as well as an ancient impulse to survive them at all costs.

“Father Time,” then, isn’t just a song about the limits of a dominant form of masculinity, or the failures of one man’s father, or his successes. Or the joy you felt but couldn’t sing about. Or how, for Black boys growing up everywhere in the United States of America, the language of adoration and admiration alike are policed from the very beginning, often by forces that don’t let up for as long as we are alive. Somehow, against the tide of centuries of such brutalization, there persists the possibility of something like the sort of intimacy, however fraught, that Kendrick outlines throughout the album.

This, it seems to me, is the project’s core theme: How, in a world where Blackness is said to be synonymous with general dishonor, do we nevertheless care for each other? How does such care show up in real time? Where and how does it fall short, or suffer from a contamination so familiar it defies our attempts to name it, even when we try? In what ways does that love surpass human understanding? Can it survive the full force of an entire social order dead set against such love? Could you be loved? Are you sure?

The map of human relations Kendrick lays out for us here—the larger social world our love must survive—is an intricate one, full of both opportunities and threats. “We Cry Together,” for example, brings to life the story of a romance cracking at the seams—one that appears to be done for good, before an unexpected (and genuinely tragic, though it is presented ironically) volta at its conclusion. “Auntie Diaries” tells the story of Kendrick’s relationship with two family members who are transitioning, and how those lifelong bonds influence the way he comes to think about the exclusionary, queerphobic rhetoric—employed by himself and others everywhere from the playground to the sanctuary—that he once treated as acceptable everyday parlance. Kinship, we are reminded, demands transformation. It is, by its very nature, marred by our human frailty, our disposition toward falling short.

Kendrick doesn’t shy away from that complexity; he embraces it. He acknowledges the terribleness that served as his condition of emergence while refusing to let that be the entire story. The sort of trauma we experience within our kinship networks—those we are born into as well as those we choose—is one of the album’s central objects of concern. Here, though, tragedy is not a casual shorthand for Blackness. There is infinitely more to the plot. There is still room for change. But it will require that we tell the truth: “Before I go in fast asleep, love me for me / I bare my soul and now we’re free.”

These closing lines from “Mother I Sober”—perhaps the song on the album that goes most into depth about the various sorts of abuse that Kendrick’s kin, blood and otherwise, have survived over the years—are a fitting end for one of the record’s most powerful meditations on the costs of loving Blackness, loving Black people, loving oneself. Such love, Kendrick explains, requires the willful abolition of our well-earned fear. It demands the creation of new myths, icons, and images. It demands that we lift the mirror to ourselves and see the beauty, and the terror, and all that persists in between.