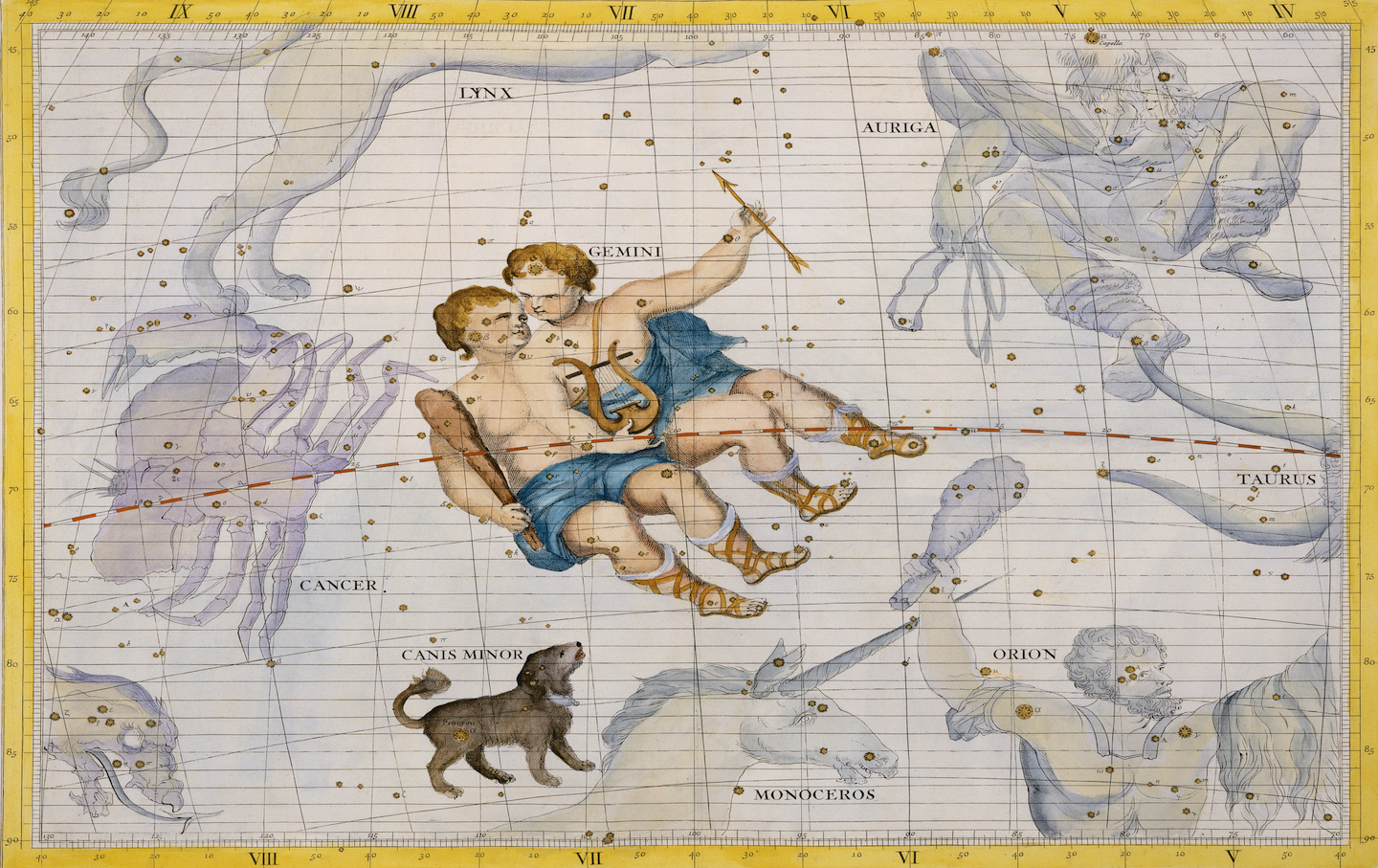 “The Constellation of Gemini with Canis Minor” by James Thornhill. (Photo by Stapleton Collection/Corbis/Corbis via Getty Images)

In the mystical fictions of Jon Fosse, plot dangles behind consciousness like a tail from a kite. Events do not occur so much as they circle outward in dense, leaden rings. His protagonists are little theaters of repetition. Particular thoughts and phrases are compulsively returned to, adjusted, undermined, and reconstituted in pale, fleeting action. The surfaces of his characters’ lives are scoured by gestures of obsession and doubt. They are derivatives in a divine calculus that forever exceeds their understanding. Fosse often dramatizes these states of consciousness under duress—paranoia, delusion, mania—to theorize about the limits of life and art.

The Other Name: Septology I-II

Fosse’s latest novel, The Other Name, whose two parts comprise the first book in a three-volume septet, has recently reached English readers in a hypnotic translation by Damion Searls. It follows the lives of two men, both named Asle, on the west coast of Norway. The first Asle, an accomplished painter and widower, lives a quiet, ascetic, uncompromising life in a tiny hamlet. The second Asle, also a painter, is slowly drinking himself to death in a nearby town. A chance encounter between the two sets in motion an enigmatic convergence. They are, we come to realize, not two separate men but rather two possible paths of a single existence. Across various and often surprising simultaneities of character, geography, and form, Fosse’s existential scrutiny suggests a world not yet denuded of its mystery.

The novel opens with the first Asle driving between Dylgja, where he lives, and Bjørgvin, where he shows his work. He begins to think about the other Asle, who we learn is estranged from his family, and chastises himself for not stopping to see him. After arriving home, he immediately sets off to Bjørgvin again, where by chance he finds the other Asle drunk and passed out in the snow. He takes him to a clinic and later has an encounter with a woman who mistakes him for the other Asle. The dreamlike texture of these events is streaked with digressions on painting and prayer, parallel manifestations of what Asle calls “invisible light,” a paradoxical shorthand for divine presence. The exquisite contradictions of his faith—the way it saturates his life and art even as it eludes, or refuses, proper explanation—lend the novel its private and eminently sensual drama: “No one can think their way to God,” he tells his neighbor.

Fosse offsets the vastness of the Asles’ inner worlds with intimate, sometimes airless narrative environments. As physical space shrinks—a significant portion of the book takes place within an isolated homestead, a car’s interior, or a hotel room—so too do the distances between versions of selves, between the past and the present, between the dead and the living. This is of a piece with Fosse’s other novels, where circumscribed settings stand in stark contrast to the depthless minds that inhabit them. Boathouse (1989) unfurls in the attic of the narrator’s mother. Melancholy (1995) follows a mentally ill artist from his rented room to a bar and eventually to the confines of an institution. These austere frameworks contract around the surplus consciousness they contain, the excessive volume of which creates the characteristic claustrophobia of a Fosse novel.

The Other Name drifts between first- and third-person narration, a formal choice that allows for a certain porousness between the two painters. Unlike most doppelgänger fiction, there is no moment of anxious recognition between the two men, no uncanniness, no role reversals or changes of fortune. They are familiar with one another, and this familiarity allows for plausible slippages in perspective. One Asle will begin to think of the other, to imagine his life, and suddenly we find ourselves on the other side of this imagining, inhabiting the mind of the other painter. They think of one another often, as if circling some shared, magnetic center. Memories, dreams, and terrors achieve an associative resonance, as if both men were recalling them simultaneously. The reader wonders along with the first Asle, “is it really happening? or is it all just something I’m dreaming? or is it something that actually happened to me once?”

Fosse writes slow, lambent, druidic prose. Seas, fjords, trees, sky, snow, and fire lend his fictions a sort of metallic aftertaste, like licking stone. There is something dirgelike, too, about his paragraphs, in which long sentences carefully wrap themselves around God, nothingness, light, love, art, time, and death. He is unafraid of spirituality, stripping the term of its glossy, contemporary superficiality. The Other Name trembles with the beauty, doubt, and gnostic weariness of great religious fiction. In Fosse’s hands, God is a difficult, pungent, overwhelmingly aesthetic force, “the invisible inside the visible.”

Opposing this religiosity is the annihilating power of alcohol. The novel is concerned with alcoholism, continuing a rich Scandinavian literary tradition that includes Tom Kristensen’s modernist epic Havoc and, more recently, Karl Ove Knausgaard’s My Struggle novel cycle. (Fosse, himself an alcoholic, quit drinking in 2012.) Each of the two painters can be seen as representing a path toward transcendence, one by way of work and faith, the other by way of unrelenting intoxication. Fosse has no interest in moralizing. (“Alcohol is good and bad,” the first Asle admits.) The permanent thirst of the alcoholic is merely another dimension of cosmic yearning, as Asle speculates while looking over the desperate patrons of a bar frequented by his doppelgänger:

the sea inside them is large, whether stormy or calm, as they sit there and wait for the next and last crossing they’ll set out on…it must have a meaning, yes, Our Lord must have given it meaning, they think, he writes straight on crooked lines, they think, or anyway the good Lord is part of it all somehow, and it’s the devil who made the lines crooked, they think and they hold onto their cigarettes and pints and then they pray a silent prayer, a prayer more like a look out over the sea inside them, wordless, but as far as the eye can reach over that sea the prayer extends, entirely wordless, because the words will be left behind…

The novel ends with an extraordinary soliloquy. The first Asle, falling asleep, begins to think of his latest painting, which sits completed in his studio. The bare, abstract image, of two lines intersecting, possesses what he calls, in another of his paradoxical formulations, “the shining darkness,” which can be thought of as the hypnic jerk induced by aesthetic truth. The painting is unique to his career: “I see that the black darkness is shining from the picture, from almost the whole picture, the black darkness is shining, yes, I’ve hardly ever seen the black darkness shine like that from any other picture.” The two lines, of course, are the two Asles, twinned trajectories that briefly touch in a moment of salvatory possibility. Reified in the painting, their lives are reduced—or exalted—to the purity of symbols.

Deeply enigmatic though never obscure, the novel presents questions—Why do we choose one sort of life and not another? What is known and what is merely believed?—for which it has no answer. In place of solutions, we are offered enormous and deliberately paced illumination, like the darkened half of a planet slowly turning toward the sun. “Life isn’t something you can understand,” the first Asle says, “and death isn’t either.” But to understand how completely these things elude comprehension, and to clothe their fundamental mystery in such gorgeous raiment, is an achievement no less profound.