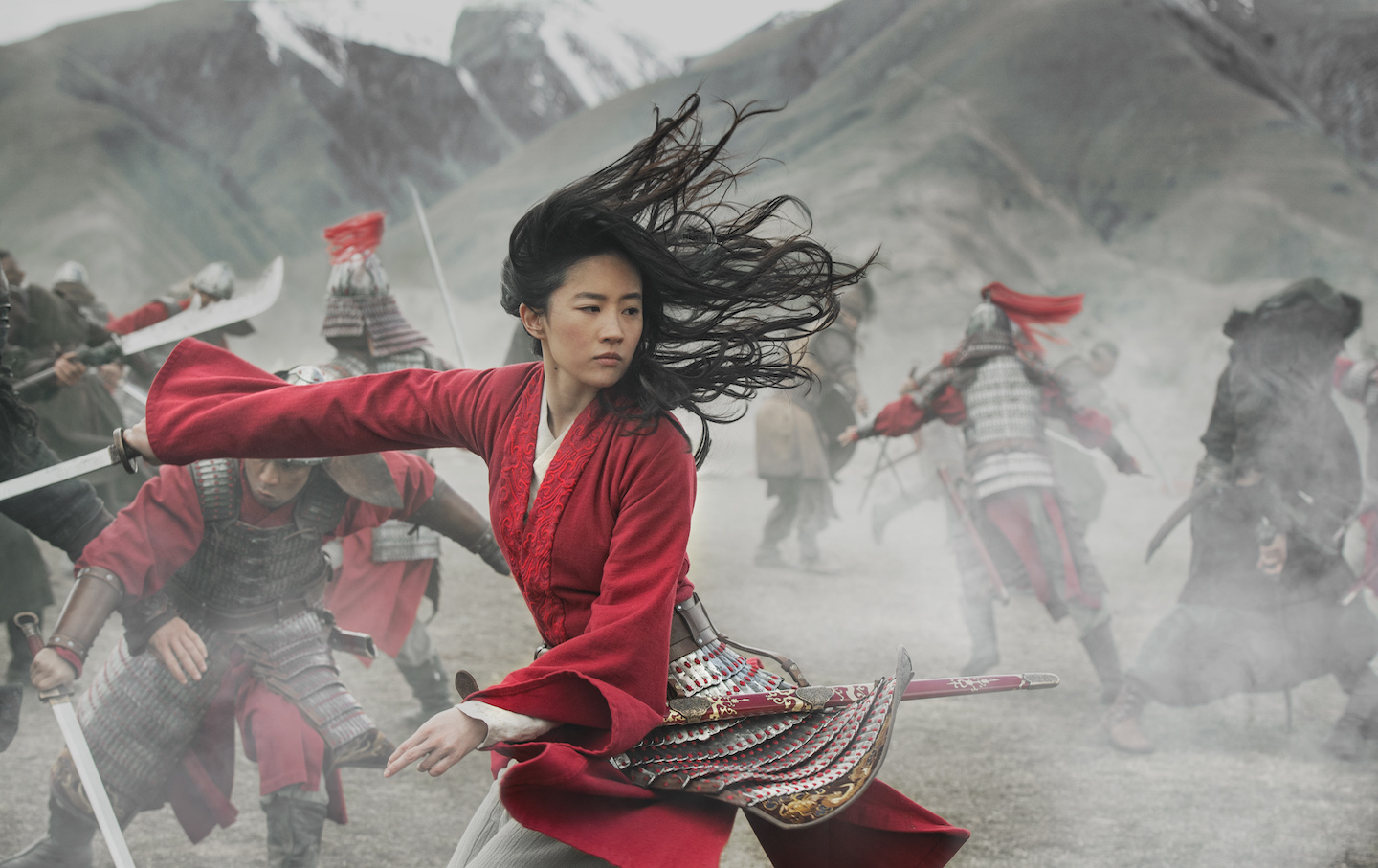 You might already know the story of Mulan, or at least a version of it: a young woman in ancient China who passed as a man to take her father’s place in the army and defend her country. It has inspired numerous reinventions, most recently by Disney with a live-action movie featuring Chinese actors. “There have been many tales of the great warrior Mulan,” the narrator says at the beginning of the film, which was released this month. “This one is mine.”

Despite the enduring popularity of Mulan’s legend, very little is known about its origins. The first written record of it, a ballad likely composed in the fifth or sixth century, is just over 300 characters long. In a concise and elegant style, it tells the story of her departure, hardship, battles, and victorious return. Meager biographical details are revealed: She lived with her parents and a pair of siblings somewhere in today’s northern China, not far from the Yellow River. The large gaps of information gave future generations room for reinterpretations; themes of loyalty, patriotism, martial prowess, and female empowerment were inserted over time. “There is so much uncertainty in this story, no matter who you are, what purpose you have, you can reshape the story to express your own vision,” says Jinghua Wangling, a professor of medieval Chinese poetry at Loyola University. In a way, it’s like a Rorschach test; each version reflects more of the philosophy and politics of the beholder’s era than that of the original Mulan story.

The latest version inspired interpretations unintended by Disney. Last year, when Liu Yifei, the Chinese American actress who plays Mulan, posted on Weibo in support of the police suppression of anti-government demonstrations in Hong Kong, many people called for boycotting her and the movie. In July the detention of the prominent Hong Kong pro-democracy activist Agnes Chow triggered the trending of the hashtag #TheRealMulan on social media, and Chow’s supporters flooded Disney’s paid ads on Twitter with responses condemning Liu’s pro-police stance with the hashtag #BoycottMulan.

A political conflict was the last thing Disney wanted for its $200 million production. By hiring Chinese actors, many of whom are stars in China but little known in the United States, the studio clearly aimed at the mainland box office. Given this target audience, one prerequisite for success is creating a story that pleases the Chinese government, fitting Mulan squarely within the official censors’ boundaries. In the credits, Disney expresses gratitude to the police and “publicity”—otherwise known as propaganda—departments in Xinjiang, where the movie was partly filmed, a region where more than 1 million Uyghurs are in internment camps. Behind the scenes, Disney consulted Chinese authorities and advisers, receiving guidance that included obscuring historical specificity. The movie tells a story of bravery and fighting for what’s right. The making of the movie is a story of surrender.

The interpretation of any historical text, be it the Bible or the US Constitution, is, of course, a delicate balancing act. Too narrow a reading suffocates any contemporary implications; too broad a reading risks drowning out the historical context. In Mulan’s case, the legend’s long history of being retold and reinvented is testimony to the longing for stories featuring a strong female lead (in Hollywood jargon). During the Ming and Qing dynasties, a slew of plays and novels fleshed out the texture of Mulan’s life story. She was given the family name of Hua, and in some versions she marries a bright court official named Wang upon her return. In the modern era, her story was made into dozens of operas, and for a good portion of the 20th century, almost every decade saw a new production in China. In the early 2000s, a singer named Peng Liyuan—now the first lady of China—played Mulan. Switching between a white robe and maroon armor, she belted out at a show in Vienna, “I will send the enemy fleeing and calm the turbulence. / Be a woman hero standing tall between heaven and earth.”

Throughout the various remakes, Mulan’s priorities and enemies and even her own character evolved. Many traits now considered essential to the character were hardly a factor earlier on. A Ming dynasty writer, Xu Wei, explored the gender transformation Mulan undergoes to disguise herself as a soldier. In a striking scene she releases her “golden lotus”—a euphemism for women’s painfully bound feet—and changes into men’s shoes. It is tempting to see the gesture as a metaphor for women’s liberation. In the same breath, however, Xu’s Mulan worries about whether she will be able to recover her delicate feet when she returns to womanhood for marriage after the war. Xu dabbles in the theme of the performance of self without venturing outside the gender norms of his time. The transgressions of his Mulan “are not really that transgressive: Mulan uses expedient means to carry out a task and, having succeeded, seems to return to exactly who she was when she began,” write the authors of Mulan: Five Versions of a Classic Chinese Legend, With Related Texts, which documents the character’s changes over time.

In Disney’s versions, Mulan is a warrior who wants to defend her country against menacing barbarian hordes; the gray-skinned creatures in the 1998 animated film become a northern tribe played by slightly tawnier Asian actors in the new movie. The original Mulan was perhaps reluctant to embrace the necessity of warfare. Her memories of the austere frontier accentuate the pointless losses rather than glorify the experience:

The enemy and the nature of the conflict were not defined in the ancient ballad and have shifted widely. In the earliest versions, Mulan was sometimes fighting local bandits or a western tribe, and in one she even collaborates with nomads to attack China proper. By the beginning of the 20th century, as the Qing court was seriously challenged not only by domestic uprisings and calls for reform but also by British and other European colonizers, the theme of fending off foreign invaders took hold. In a 1903 Peking opera script, Mulan identifies the foes as “barbarians” who had long “troubled China on its borders” and vows to risk her life to kill the enemy leader for her emperor. The ardent patriotism sparked by China’s existential crisis continued for decades, part of the country’s “century of humiliation,” but the subject of this sentiment has changed as new visions for a path forward for the nation emerged.

In 1912 the Nationalists put an end to the dynastic era and established the Republic of China. That year, Peking opera master Mei Lanfang presented and starred in a production that embodied the nationalist ideal that has defined the story ever since, marrying patriotism and feminism. It was also the first version to appeal to an international audience. Two decades later, cosponsored by former first lady Edith Wilson, he toured the United States with the production and was praised by The New York Times. (The reviewer confessed to having understood little but lauded Mei’s performance as “the ultimate in grace and style, and a token of far-off, ancient, abstractly beautiful things.”)

By midcentury, the opera actress Chang Xiangyu appropriated Mei’s show for Mao’s new revolutionary China. When a fellow soldier whines about having to risk his life in battle when women can sit around at home, she responds, holding a sword in one hand, “Women have to work hard day and night, so that soldiers have food to eat and clothes to wear.” A few men look at their uniforms as if seeing them anew, but Chang’s Mulan hasn’t finished yet. “There have been many female heroes who contributed to the country,” she sings. “Who says women are less than men?” Those lyrics not only echoed Mao’s rhetoric about women holding up half the sky but were also used as propaganda in the Korean War, or the War to Assist Korea in Resisting America, as it is known in China. Chang performed the show in half a dozen provinces and used the tour’s proceeds to donate an aircraft to the war effort. Her opera became an instant classic in China, not least because it highlighted the Chinese Communist Party’s values. Mao personally thanked her for her contribution, marking the beginning of Mulan productions made to reflect the government’s “socialist characteristics.”

In Disney’s flattened world, the new Mulan belongs to no specific history. Nor is it rooted in contemporary reality. Scripted and produced by an almost entirely white crew, the movie perpetuates a make-believe view in which China has a monolithic past, in which foreign invaders are fended off and ancient moral virtues are upheld by all. “Whether you are a Disney movie producer or an authoritarian party, there is a tendency to want to create a simple, clear vision of Chineseness and then put it up against a clear evil villain,” says Georgetown history professor James Millward. In fact, many Chinese dynasties were headed by “outsiders,” including the Manchus of the Qing dynasty and the Mongolians of the Yuan. In Northern Wei, the period in which the legend of Mulan is largely believed to be set, her home region was ruled not by a generic Han Chinese emperor, as the movie shows, but by the Tabghach clan of the Xianbei, ancestors to the Turks and Mongols.

The ballad also refers to the imperial ruler as the Son of Heaven and as Khagan—blending the Chinese concept of the emperor as someone who rules everything under the heavens, and the Mongolic and Turkic title for paramount leaders, a clear sign of a multilingual, multiethnic past, not the one proffered by manipulative textbooks and superficial popular entertainment, both hemmed in by censors eager to bolster national unity. An unpopular but plausible theory holds that the quintessential Chinese heroine may be Xianbei instead of Han Chinese. “Nobody is Chinese in this story in a technical national sense,” says Millward.

More than three decades ago, Maxine Hong Kingston invented her own Mulan in her debut book, The Woman Warrior. After training in a dream-sphere of mountains with wild creatures and a saintly old couple, Kingston’s Mulan saves her people not by upholding a king but by removing one and installing a peasant, who knows the people’s struggles intimately. “From the fairy tales, I’ve learned exactly who the enemies are,” Kingston writes, reflecting on her life, with her parents’ roots in China and her struggles in America. She writes that to avenge her tribe, her heroine would have to take back farms from the land-reforming Communists of China as well as laundry shops from the racist policy-makers of America. One Mulan’s revolution is another Mulan’s subversion. But these are stories too uncomfortable for Disney to explore.