A section of the Berlin Wall stands on display at the United Nations in New York, 2014. (Photo by Don Emmert / AFP via Getty Images)

In 1990, the oil baron and philanthropist Robert Hefner III sent a representative to Germany to purchase a section of the recently dismantled Berlin Wall. The portion he eventually acquired consists of three panels weighing 8,818 pounds, which stand 12 feet tall and 16 feet wide. Hefner and his wife, MeiLi, loaned the panels to the University of Virginia in 2014, where they stand today in a glass display case in the middle of campus. “The installation serves as the centerpiece of a year-long celebration of that unforgettable day, November 9, 1989,” writes John Kelly in the Fall 2014 edition of the university’s arts magazine, “when the whole world looked on to witness the power of the human spirit to triumph over oppression and to celebrate those unalienable rights which Thomas Jefferson so famously championed and cherished.”

Throughout their 65-minute documentary, The American Sector, Courtney Stephens and Pacho Velez interview people at more than 50 segments of the Berlin Wall that have been brought to the United States to commemorate the reunification of Germany and America’s victory in the Cold War. At UVA, two students stand in front of the installation, but they don’t look particularly excited to be there. “I am curious about it but not overly impressed, I guess,” says one of the young women. “It’s got a piece of history, tied to a piece of history that I don’t…as an American know very much about or have much connection to.” The other student adds, “I’ve always thought it was kind of out of place, just because I don’t know of the university’s connection to anything with the Berlin Wall,” before noting the material history of UVA: “It’s built by slaves. The lawn rooms, which [are] considered the highest honor for students to live in, with the highest academic standing, were built by slaves. The bricks were laid by enslaved laborers’ hands, and I think that UVA seems to have a lot of issue[s] with physically acknowleding its relationship to slavery.” These students push back against the mythology of their school and, likewise, of their country, refusing to accept the line that Thomas Jefferson “so famously championed and cherished” unalienable rights and leading into a deeper conversation about our history and who and what gets celebrated.

Across the country, on campuses and in city squares, Americans have opened a dialogue, both rhetorical and physical, with the troubled history of monuments. And yet the Berlin Wall, now scattered in segments across this country, has somehow come to represent the enduring spirit of American freedom. Why does this particular length of concrete maintain its hold on the American imagination, 30 years after the wall came down? And what does a monument to winning the Cold War mean to those of us who have only ever known the War on Terrorism and the other violent borders it produced?

The only thing the scenes of the film share in common is the wall. One piece is in a lobby at Microsoft’s headquarters in Redmond, Wash., one at Ripley’s Odditorium in San Antonio, another at the Franklin D. Roosevelt Presidential Library and Museum in Hyde Park, N.Y., and a few on private properties. The interviewees range from a Hard Rock Cafe server at Universal Studios on his lunch break to a CIA bureaucrat only reachable by phone, who remarks that the fall of the wall caused an identity crisis for the agency. “The only enemy we had known was the Soviet bloc,” the bureaucrat admits. “There was even talk about whether we needed a Central Intelligence Agency after the wall came down, right? Like, did we even have a purpose anymore, you know, after we had defeated this monolithic adversary?” Needless to say, the CIA found other purposes.

The film’s strengths lie in its simplicity. The shots are carefully composed and lingering, giving us a visual representation of the United States from Los Angeles’s Mulholland Drive to a Chicago subway station to a food court in Seattle. Furthermore, the thoughts of the subjects are captured with the ear of an ethnographer and edited for clarity and curiosity, which allows for moments of gravity as well as humor. For each person, the wall means something explicit about freedom, democracy, and patriotism, but implicit in these descriptions are ideas about propaganda, indoctrination, our intergenerational relationships with history, and the broken promises of capitalism. 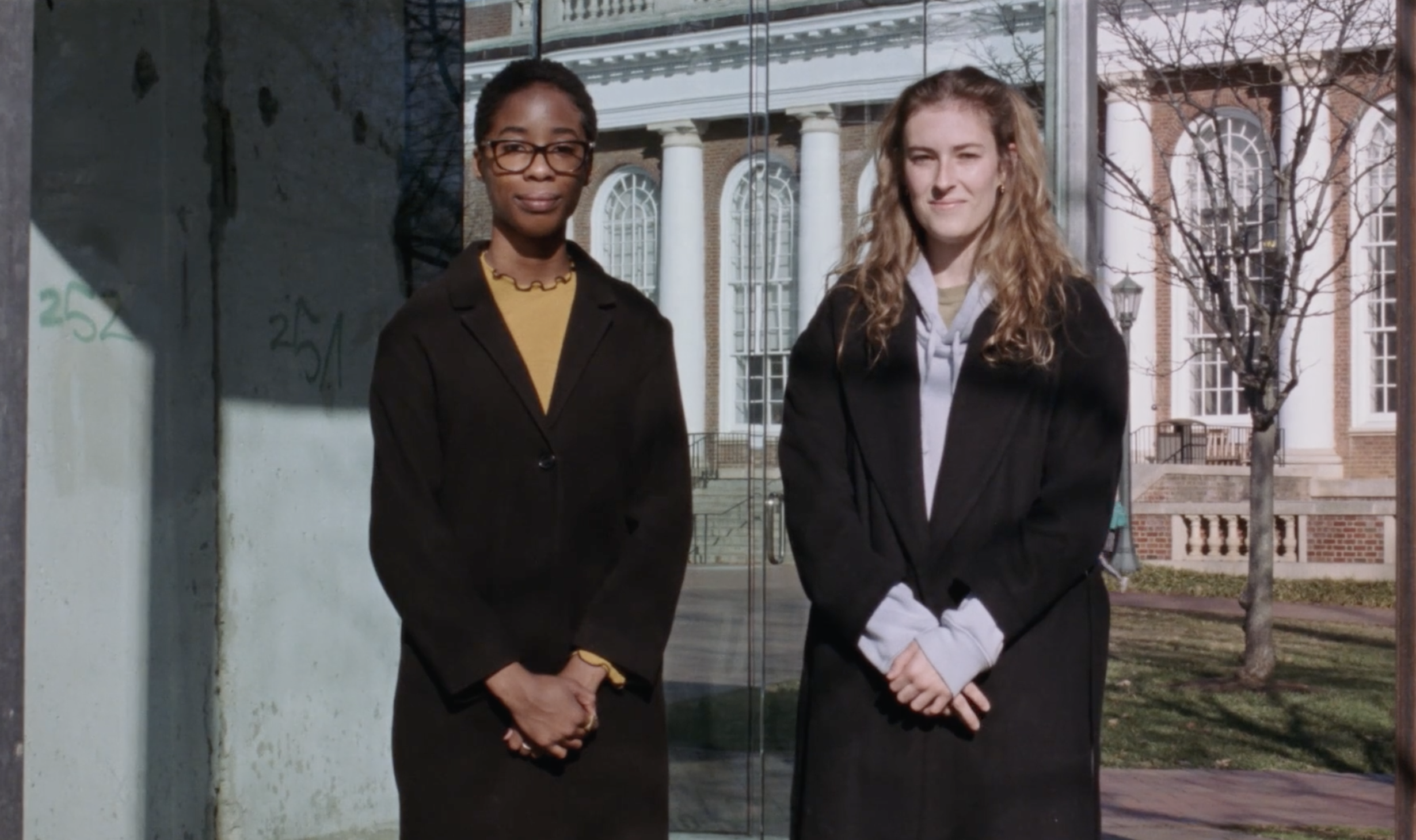 In the American political imaginary, both liberal and conservative, it is widely agreed that the Berlin Wall was “bad,” because it represents the Cold War dichotomies of the US versus the USSR, capitalism versus communism, even democracy versus authoritarianism. However, other contemporary examples of border walls enjoy wide support, such as the one at the southern border of the United States or the “separation barrier” between Israel and the West Bank. Despite the differences in policy between the Democrats and the Republicans, neither mainstream political party supports a demilitarization of the US/Mexico border or the Green Line.

This contradiction is highlighted by a few subtle moments in the film. Some subjects are unapologetic about their support for borders, whereas others offer nuanced perspectives. The foreman of a shipping crew moving a panel of the wall in Baldwin Hills, Calif., opines, “It’s a barrier but also a statement. When you have [the] focus of an enemy, it’s easy to forget your own differences. As the enemy from the outside dissipates, the enemy from inside grows. There’s no threat from the outside; the threat from the inside is bias and bigotry. People don’t feel free.” If the whole point of knocking down the wall and winning the Cold War was to spread American freedom, it does seem counterintuitive that the borders of the United States have only become more militarized since 1989. 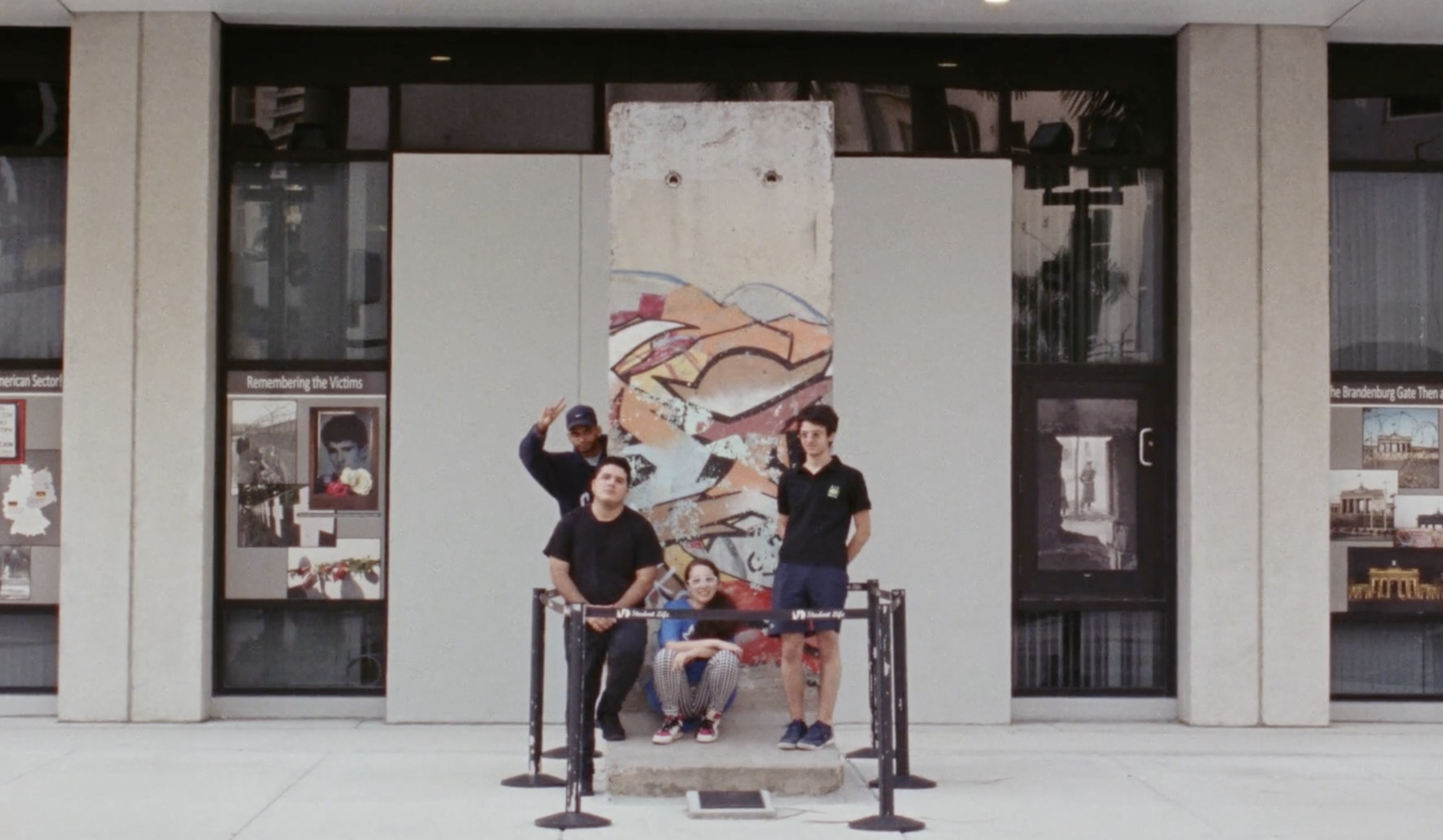 The American Sector reminds us of the weight of the Berlin Wall as a cultural artifact and asks us to reconsider the role that the United States plays in that story. One young boy out of a group of children playing outside near a piece of the wall at Eureka College in Illinois explains that “Mr. Gorbachev teared it down [sic] because Reagan told him to,” thereby assuring the audience that a new generation has been tasked with carrying the myth of American exceptionalism forward. A young man in a group of Latinx teenagers in downtown Miami remarks that coming from immigrant backgrounds means he and his friends relate to the people of East Germany. “Is there a way it could be a symbol of hope?” an off-camera Velez asks. Another teen answers, “For somebody who comes from a financial background that allows them to pursue a more legitimate route of citizenship, sure, that could represent hope. But I think for a lot of other people, it’s a reminder that they are one step away from being thrown out, [or] their loved ones, that they might not see people on the other side.” For Americans who lived through the Cold War, the fall of the Berlin Wall was a moment of triumph, a sigh of relief, and a media event. For those born after, it is another story we are told about an American victory that has no benefits for our lives, which are marred by precarity, instability, and anxiety.

Toward the end of the film, Stephens and Velez visit a panel of the wall at Fort Leavenworth in Kansas, where a Black military veteran strikes up a conversation with Stephens off camera. “You guys said you’ve been around the country,” he asks while we watch a separate shot of him drawing in his fishing line. “Have you been to Illinois yet? I have relatives who live in Illinois. I’ll try to be quiet since you guys are doing that.” Then he laughs, and Stephens replies, “No, actually, it would be great to talk to you.” The veteran explains that he’s retired and only comes onto the post to fish when no one’s around. “I did 36 years, I’m glad it’s over—I don’t want to get shot at no more,” he adds, laughing. “Desert war, Afghanistan, and before all that I was [in] Kosovo—very fortunate that I’m still in one piece. Only combat that I want is combat with a catfish.” This is followed by a closeup of the catch in his cooler, and the camera zooms out to show the panel of the wall in the foreground, which has a drawing of the Statue of Liberty scrawled on its gray concrete.

The man is good-spirited and generous with his story, but the small glimpse we get into his past speaks to the price of this post–Cold War freedom that Americans have enjoyed. In the year following the fall of the Berlin Wall, George H.W. Bush deployed more than 25,000 troops to Panama and almost 700,000 troops to the Arabian Peninsula to defend America’s “vital interests” in those regions. Stephens and Velez’s film reveals the contradictions implicit in America’s glorification of these Berlin Wall relics and asks us to consider what the material consequences of this “victory” have been: the proliferation of militarized borders all around the world and a state of war that never ends. While showing that Cold War messaging still maintains a strong hold on the American imagination, The American Sector also gives us glimmers of hope as a younger generation grapples with this history. The wall means something very different for the generation born after its fall, a generation that has been sold a different enemy but the same American dream.