In the weeks and months after the 2012 mass shooting at Sandy Hook Elementary School, which took the lives of 20 students between the ages of 6 and 7 and of six adults on the staff, the residents of Newtown, Connecticut, were flooded with thousands of physical expressions of condolence from the public. Many of them were addressed to the whole town. They were delivered to the Newtown Municipal Center and from there to a nearby airplane hangar, where bins overflowed with flowers, quilts, drawings, banners, postcards, and letters from around the world.

Strangers sent sympathy notes, candles, crosses, and statues of Jesus; they made paintings of the children who had been killed; cumulatively, they mailed more than 65,000 stuffed animals, more than twice the population of Newtown. It was too much, and never enough. What are the parents of a murdered first-grader to do with a thousand teddy bears?

After learning that the city planned to incinerate the vast majority of these condolences, creating a cremated “sacred soil” from the ashes of the gifts, Yulie Moreno, a local amateur photographer, took it upon herself to document every item. She assembled a team of fellow volunteers to help, ultimately making a website,“ Embracing Newtown,” which aimed to preserve the outpouring of sympathy as much as it did to honor the lives lost. “There’s all of this stuff, and you feel responsible to let people know it was touched, it was looked at, it was opened, you know?” Moreno told the artist Andres Gonzalez in one of the interviews included in American Origami, his solemn, disquieting photo and text exploration of mass school shootings in the United States.

Only weeks before the Sandy Hook massacre, Gonzalez had returned to the United States after seven years of living and working abroad. Coming home, he had intended to find a new project that would center on American culture; he imagined it might even take a celebratory tone. The reports of the shootings hit him with a particularly devastating jolt. As he found he couldn’t look away from the news, he began to research the subject, tasking himself with finding a way to present the story of mass school shootings to a country that has become numbingly familiar with them. 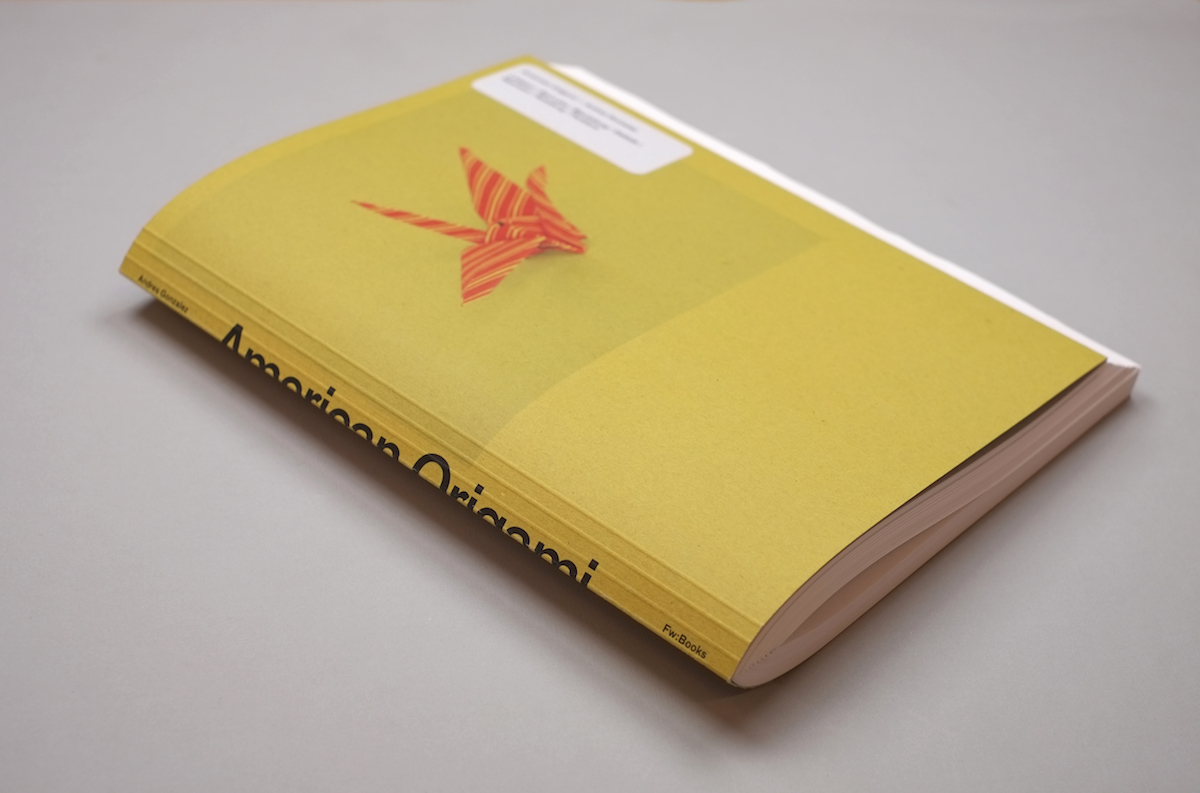 With American Origami, Gonzalez has also assembled what is essentially a record of mourning. But where Moreno (the amateur photographer of the Newtown memorials) was driven by the impulse to document emotion, Gonzalez is interested in how the aftermath of these shootings—the shock, loss, and grief they cause—embeds itself in the school and the community. Starting with Columbine in 1999 and concluding with Parkland in 2018, Gonzalez focuses on the long-term consequences of seven separate mass school shootings that have occurred in America over the last two decades and provides an affecting yet unsentimental exploration of a uniquely American epidemic. Most notably, and rare for contemporary photo books, American Origami devotes nearly as much space to its text as it does to Gonzalez’s own images. Interviews with survivors and community members as well as the inclusion of archival documents represent a significant portion of the book. Acknowledging the weight of words is a risk a more purist photographer wouldn’t take, and the book speaks nobly to a willingness to subvert artistic ego for the sake of a story.

Part of this is accomplished through the book’s design. The cover of American Origami is benign as a manila folder, which it closely resembles. But this particular office file unfolds in a curious, accordion-like fashion, as orchestrated by designer Hans Gremmer. When the pages are turned, they reveal other pages folded underneath, a container for the hidden and deeply troubling stories expanding below innocuous surfaces. 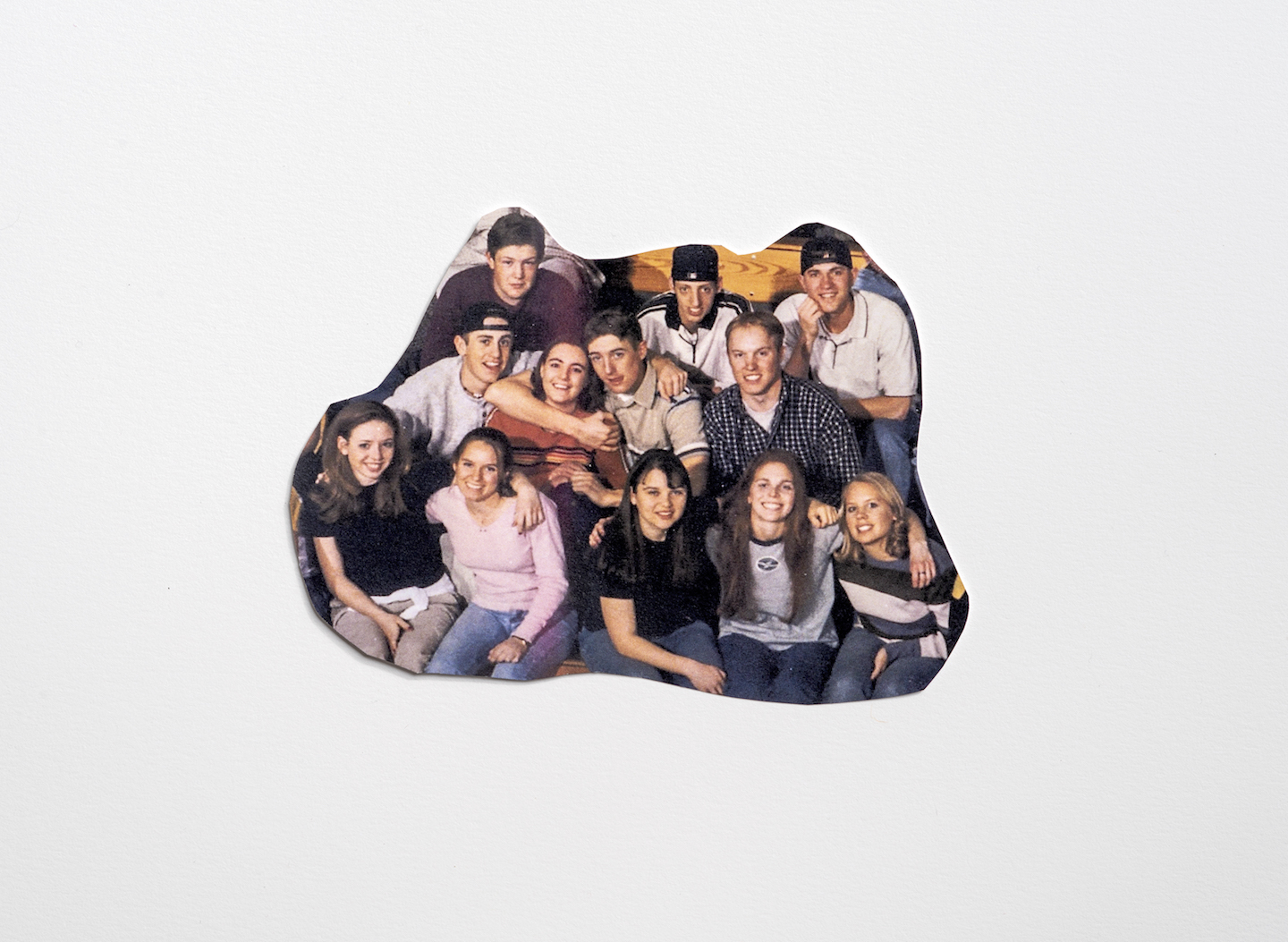 Each section starts with a library-like cataloging of the data surrounding the individual shooting: the location, the date and time, number of deaths, and number of injuries. Alongside the accumulation of information, Gonzalez uses his photos and texts to show that a kind of scar tissue grows up around the campus of a school shooting after the memorials and anniversaries have started to fade from mind and the reporters have retreated. Peel away the pages, and the wounds show through in a reliquary of objects buried below the surfaces. Gonzalez intersperses photographs of handwritten letters and postcards from strangers alongside transcriptions of presidential addresses (Barack Obama speaking to Sandy Hook mourners after what he still calls the toughest day of his presidency; Donald Trump, in the book’s final text, making a speech after Parkland). He reproduces online rants and chats, displaying them among examples of the strangely affecting photo-detritus of the high schools he visits—students’ class pictures and candid snapshots scissored in curlicues around the edges. Soberly archived here, even a teenager’s scrapbook takes on historical weight.

There is a silenced, shut-in look about the pictures of these towns: Gonzalez photographs withdrawn, new-looking houses and rained-on sidewalks, empty streets and quiet yards and campuses, as if they were cemeteries, which they are. In DeKalb, Illinois, where six people were shot and killed at Northern Illinois University on Valentine’s Day in 2008, an abandoned-seeming tire store advertises “Alignments and Shocks” in its windows. Here and there in these wanderings are faint impressions of people—a fence door left slightly ajar, a sliver of a curtain opening. Trees stay green and flowers bloom, though not obnoxiously, perhaps even a little stoically. Silence is palpable too in the snow-covered grounds of Red Lake High School, where the March 2005 killings of 10 people on a closed Native American reservation in Minnesota was, at the time, the deadliest school shooting after Columbine, although then scarcely covered by the media. President George Bush did not acknowledge the shooting publicly until five days later, and then only on his weekly radio broadcast. 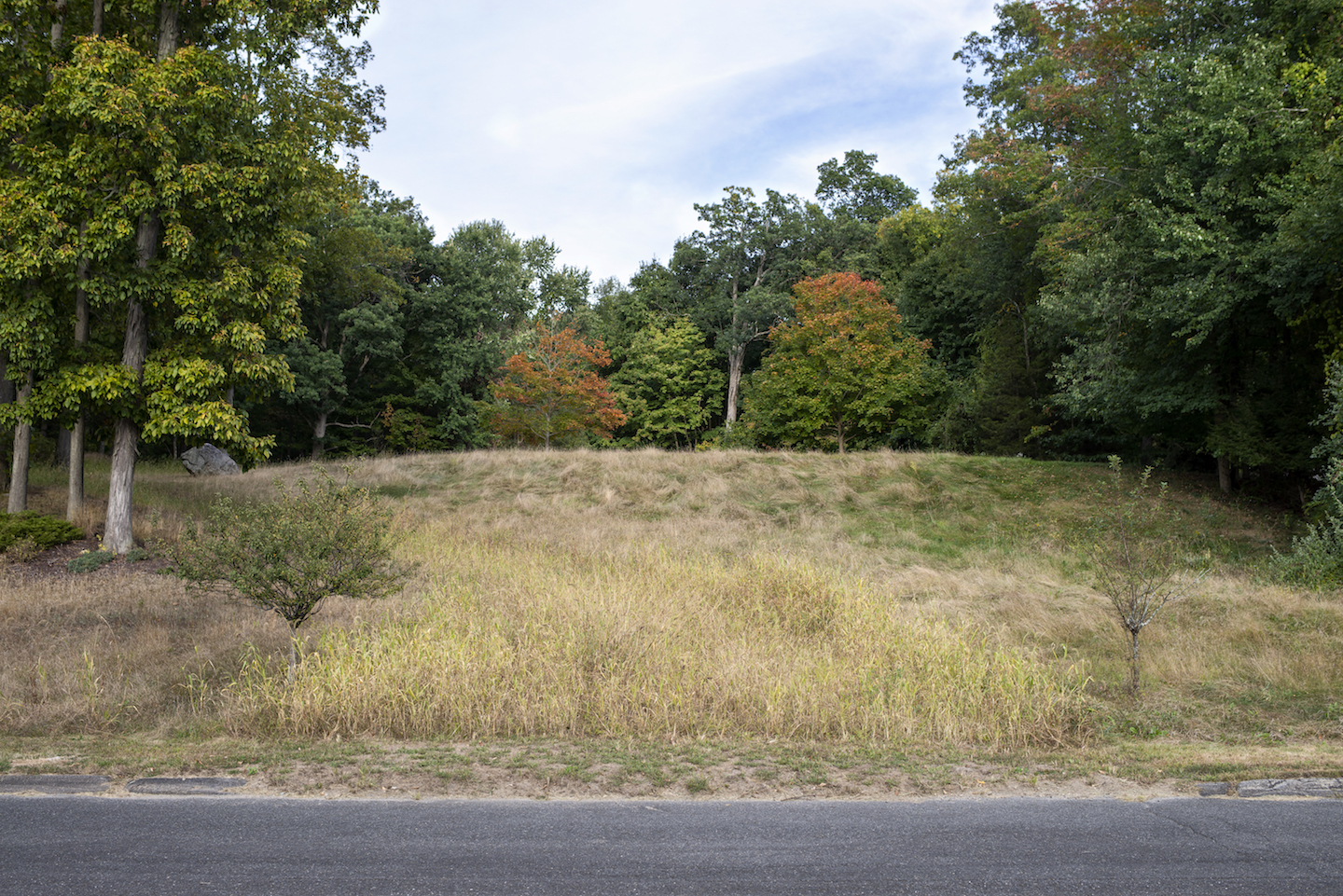 A plot of land in Newtown, Connecticut. (Photo by Andres Gonzalez)

The book’s narrative switchbacks constantly return the reader to the emptied landscapes and places of these killings, seeking solace in the cyclical insistence of seasons and daytime and clouds. One of these landscapes turns out to be the plot of land in Newtown where the Sandy Hook killer lived with his mother, whom he shot dead before heading to the school. The town bought the property for no cost from a local bank, demolishing the house that once stood there; Gonzalez’s photographs show tall wild grasses bordered by a stand of trees. The facing page unfolds to detail the transformations of other sites of campus killings—a classroom wing at Virginia Tech turned into a center for peace studies; a wooded area around the rebuilt Sandy Hook Elementary. The meditative quality and structure of Gonzalez’s photos of the sites and towns of the shootings bear a kinship with Our Loss, Joel Sternfeld’s nearly wordless, book-length requiem documenting the site in Prospect Park, Brooklyn, where environmental activist David Buckel immolated himself in 2018.

In American Origami, Gonzalez’s interviews resonate in particular. They are the voices behind the closed doors of his quiet pictures. In Parkland, Florida, Gonzalez hears from Carlos Rodriguez, a student whose family came to Florida from Venezuela to escape the extreme gun violence there and found himself hiding in a classroom fielding a call from his sobbing father. In Roseburg, Oregon, Gonzalez talks to gunshot survivor Julie Woodworth, a former student at Umpqua Community College who in 2015 was shot multiple times—in the head, and in all four limbs—and remained in a coma for a month afterward. Visually, she is represented in the book as are all the interview subjects, by two understated portraits in black-and-white: The headshots show only her face and the back of her head, encircled by a braided headband, her hair pulled back in a bun, both photos concealing any lingering physical evidence of her wounds. Gonzalez cedes ample space to Woodworth for her to discuss her struggles to walk, to regain her memory, and to articulate her thoughts. Her answers come with protracted slowness; the gaps between her fragmented sentences magnify the sense of loss, the near impossibility of putting what happened to her into words. 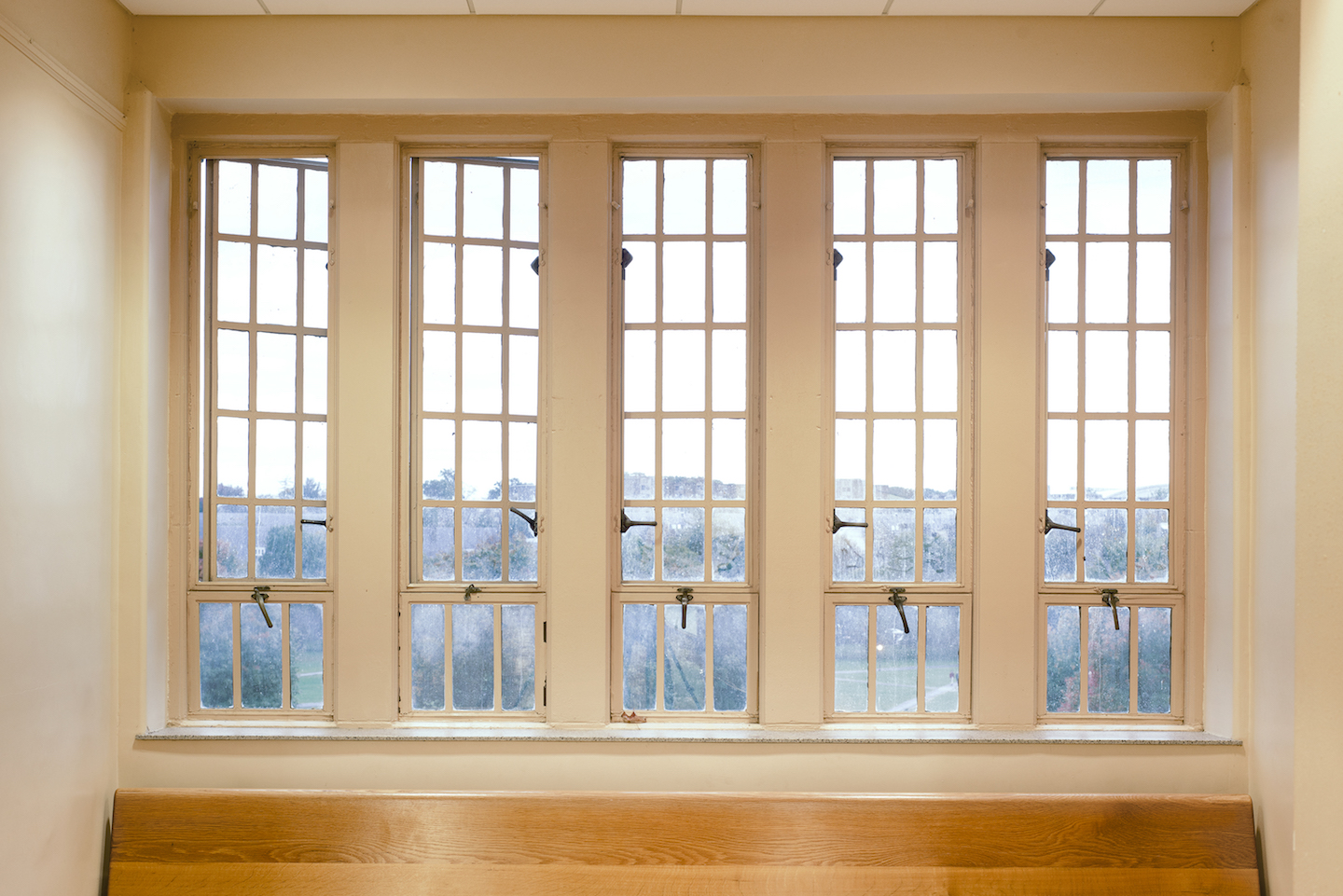 A classroom at Virginia Tech. (Photo by Andres Gonzalez)

Gonzalez doesn’t politicize the shootings but instead calls into question our ability to grapple with the aftermath of tragedy, and to remember. “The voice keeps the life within it,” says Kathryn “Jody” Beaulieu, former archivist at the Red Lake reservation, discussing her own conflicted feelings about preserving objects and documentation surrounding the shooting there. In Native American tradition, oral history is valued over material objects. When a person dies, their belongings are ceremonially burned—a practice echoed in the “sacred soil” created by the cremated offerings to the survivors of Sandy Hook. Still, Beaulieu acknowledges, a small collection was assembled at Red Lake, for the community’s own healing. “Now we have something tangible to recall the memory, so it helps,” she says.

The inadequacy of “thoughts and prayers” as a response to mass shootings in America rings hollowly throughout debates on gun control and how to prevent future tragedies. In working with the physical manifestations of grief and the impressions of loss, Gonzalez acknowledges this discrepancy too. A photograph of a camera tripod in the parking lot of Marjory Stoneman Douglas High School reads like a self-portrait of a photographer questioning his own project. Words and images, like thoughts and prayers, are merely representations too; they can’t solve anything, but, this book implies, they can push us closer.