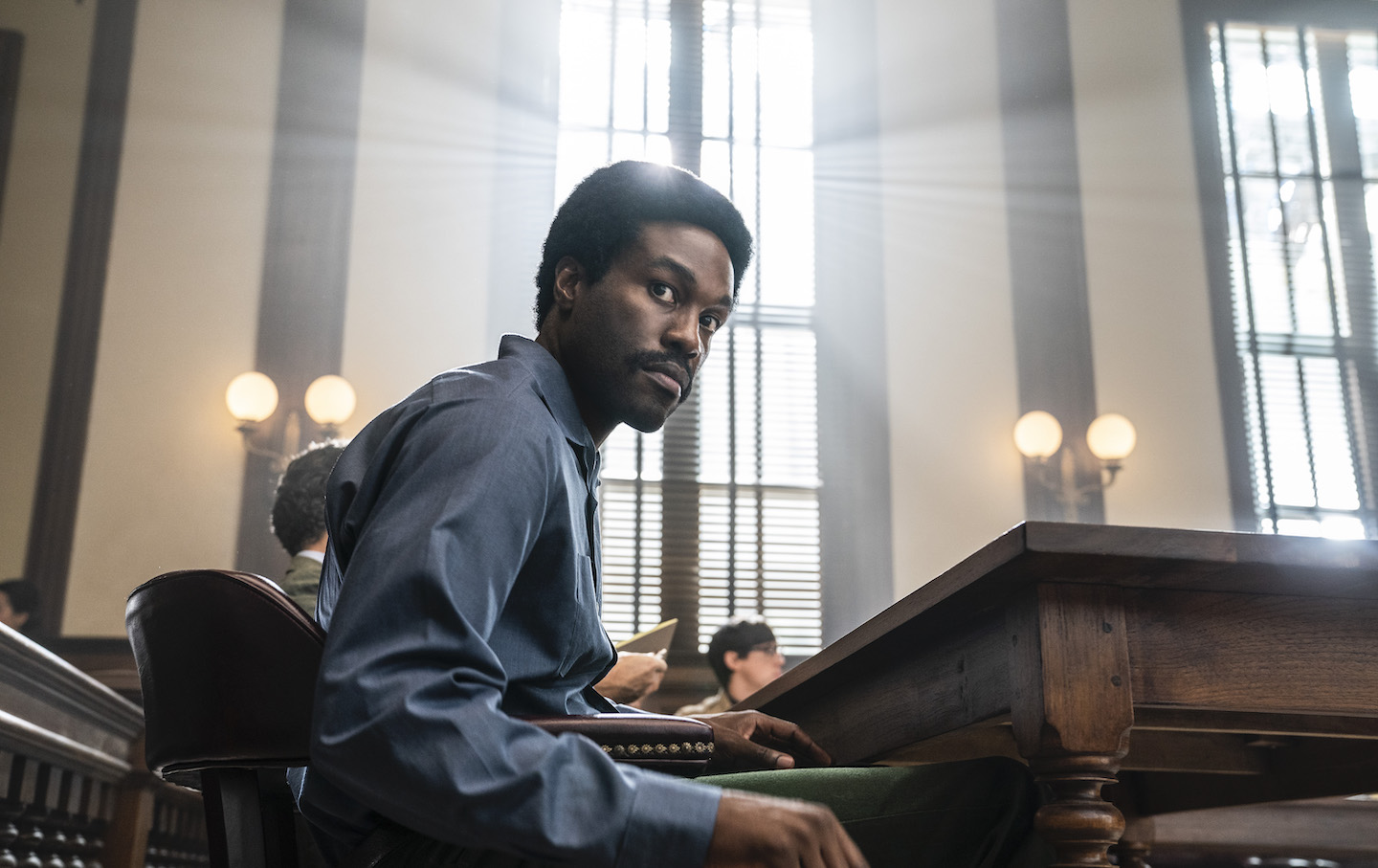 Yahya Abdul-Mateen II as Bobby Seale in The Trial of the Chicago 7. (Photo by Niko Tavernise / Netflix)

Soon, Aaron Sorkin thinks, we’ll all laugh about this over brunch. Or at least that’s the perspective from which he retells the history of the Chicago Seven in his new film. There are two scenes, midway through, that encapsulate the mission he is committed to: During the trial, Judge Julius Hoffman orders one of the defendants, Black Panther Party chairman Bobby Seale, bound and gagged after he tells Hoffman to “strongly fuck” himself. It’s a disturbing scene, made more unsettling by the fact that unlike many of the events in the film, this event did, in fact, occur during the actual trial. Although Sorkin alters its timeline (he ties Seale’s outburst to the murder of Chicago BBP chairman Fred Hampton, which occurred later), downplays its severity (Seale was actually gagged for multiple days), and erases Seale’s protestations during the incident, the moment is clearly meant to serve as a searing indictment of Hoffman’s racism and general bias regarding the defendants. Shortly after, we see Youth International Party cofounder Abbie Hoffman (no relation to the judge), when questioned by US Attorney Robert Schultz as to whether he has “contempt for his government,” respond by saying, “I think the institutions of our democracy are wonderful things that right now are populated by some terrible people.”

It’s important to note that Hoffman never said anything like this during the trial. Given what he did say—things like “I suppose I am not patriotic,” and “[I am] an enemy of the State”—such a portrayal of Hoffman as reverential to American institutions is a calculated choice. Juxtaposed against a scene of brutal court-sanctioned violence against Seale, we might ask, what and for whom does this jingoistic whitewashing of Hoffman’s radical politics serve? Where Sorkin could have accounted for the breadth of the New Left revolutionaries and Black radicals’ oppositional politics, he instead chooses to turn them into earnest proselytizers for American democracy.

The Trial of the Chicago 7 depicts the courtroom drama of the federal government’s prosecution of Bobby Seale, Tom Hayden, Rennie Davis, David Dellinger, Abbie Hoffman, Jerry Rubin, John Froines, and Lee Weiner for conspiracy to riot, following the massive protests and confrontations with the police and National Guard at the 1968 Chicago Democratic Convention. With the exception of Froines and Weiner, the Chicago Seven (officially becoming “seven” after Seale’s case was declared a mistrial) were major figures in the New Left: Hayden and Davis with Students for a Democratic Society (SDS) and the National Mobilization Committee to End the War in Vietnam (MOBE); Hoffman and Rubin with the Youth International Party (“Yippies”); Dellinger, a high-profile conscientious objector and anti-war pacifist who founded the Committee for Nonviolent Revolution; and Seale, BPP chairman.

As much as the film is driven by the spectacle of the trial itself, its portrayal of these individuals and their movements also serves as a referendum on how we should remember ’60s-era radicalism in the United States. Sorkin seeks to tame these radicals, and the anti-imperialist, anti-racist, anti-capitalist, and revolutionary politics they represented (not, of course, without differences among them) by recasting them as boosters for liberal reform. The result is not only an inaccurate rendering of the group’s political visions but a tone-deaf affirmation of the American state, and specifically law enforcement, as fundamentally virtuous.

The film presents the defendants in question as, at best, overly idealistic and, at worst, charlatans. In the opening montage of the various defendants getting ready for the DNC protests, Sorkin means to give us the impression that they are a bunch of passionate and wide-eyed anti-war activists but also immature buffoons. First, we see Davis and Hayden speaking to a group of college students about the use of napalm in Vietnam, with Hayden calling on them all to come to Chicago. As he’s mid-pitch, the scene cuts from Hayden saying, “But most importantly…,” to Hoffman quipping, “To get laid.” Soon after, we hear Dellinger calming his wife and son by saying, “I’ve organized a hundred protests. This one will be no different in that it almost certainly won’t work.” Next, there’s a painfully expository scene at the Oakland BPP office, where Seale exclaims that he’ll “fuck the motherfuckers up!” if the police escalate. A Black woman BPP member attempts, laughably to anyone with even cursory knowledge of the BPP’s militant vanguard politics and history of armed defense against police, to dissuade Seale from attending and giving his speech because of how white people and cops might misinterpret his rhetoric. We then witness a tie-dye-clad, headband-wearing Rubin teaching some students how to make a Molotov cocktail.

It all feels like a middle school history textbook’s passage on ’60s social movements come to life, both in its cartoonish lack of depth and in its implicit critique of these movements as perhaps well-intended but ultimately excessive and misguided in their visions for social change. While the viewer is certainly made somewhat aware of the purpose of the protests—to express opposition to the Vietnam War, and to object to the Democratic Party’s complicity in sustaining it—Sorkin’s framing loudly implies that the defendants are ultimately channeling their energies incorrectly or that all they really want to do is get laid, smoke weed, and set buildings on fire. The inclusion throughout the film of (manufactured) interpersonal hang-ups of some of the defendants—namely, Rennie Davis’s attempt to hide his political commitments from his girlfriend and Jerry Rubin’s haplessly falling in love with an undercover FBI agent—similarly codes the defendants and their respective movements as foolish.

The film’s cursory treatment of and flippant attitude toward these leaders and their movements makes a mockery of their politics, which in reality included deadly serious critiques of US institutions and a commitment to revolutionary struggle, albeit one inclusive of a range of tactics. It also misrepresents their critiques of the prevailing postwar liberalism of the day (save for a passing reference by Sorkin’s Hayden to how Nixon and Humphrey are too similar),which made gestures towards civil rights, economic opportunity, and global human rights but refused to meaningfully confront the enduring racialized and imperialist violence inherent to Cold War militarism and the postwar political economy.

In other moments, the film appears eager to valorize the defendants, but only in instances where Sorkin has taken creative license to present them, quite ahistorically, as somehow reverential of an apparently noble system of American law enforcement: He includes a fabricated encounter between defendants Hoffman and Rubin and the US Attorney prosecuting their case, Schultz, outside the Natural History Museum, where Hoffman says to Schultz’s daughters, “Your dad’s a good guy,” and then to Schultz, “We don’t have any beef with you. We know you’re doing your job and you don’t think we’re criminals.”

The idea that Hoffman—someone who in his Steal This Book referred to the United States as “Amerika” and included detailed instructions on how to lead a guerrilla struggle against the police, whom  he called “pigs”—would not have anything more than a “beef” with a Justice Department functionary is nothing short of ludicrous. “We are not interested in the greening of Amerika,” Hoffman wrote, “except for the grass that will cover its grave.” But this revisionist narrative serves a clear purpose. In The Trial of Chicago 7’s liberal approach to history, those on the left must either be dismissed as idealists or kooks or properly sheared of their more oppositional ideas—all in the service of containing their political energies within the safer framework of incremental (read friendly to capital) reform.

This message is common to Sorkin creations. An animating belief of his work is that reaching for the center, no matter what the actual material realities of this bipartisan consensus may be, is the highest form of governance. It’s a position that takes as a given the “democratic” foundations of American institutions. But this sentiment appears particularly discordant—almost desperate—in The Trial of the Chicago 7: If the film suggests, via its depiction of the defendants’ politics, that today’s radical movements to defund and abolish police are ultimately ineffective or childish, what does Sorkin see as the answer to systemic racism in the criminal legal system, or to unfettered militarism against Black and brown people across the globe, for that matter?

The remedy, in Sorkin’s mind, is merely to find better cops. Against a raft of historical evidence to the contrary, The Trial of the Chicago 7 insists that they exist. Whether through the sanguine humanization of conservative prosecutor Schultz, or the depiction of the noble undercover FBI agent who refuses to implicate the Chicago Seven in ordering protesters to clash with police, Sorkin clings to the idea that law enforcement can be a moral occupation in the United States. Racism in the legal system is to be loathed, but Sorkin sees it as an aberration, not a feature, and one that can be fixed, as Sorkin’s Hoffman suggests, by simply rooting out individual “bad apples” and investing in nebulous “reforms.”

It’s a shame. The real trial of the Chicago Seven is in fact a perfect prism through which to understand how racialized violence forms the bedrock of American institutions, especially its criminal legal ones, and why incremental reform will never bring racial justice. There are so many questions that Sorkin’s film refuses to engage with that might productively upend the presumed “freedoms” that American institutions purport to uphold and that might actually prove correct many of the Chicago Seven’s most trenchant critiques of the American state’s “fascist” tendencies. We might be prompted to question why the binding and gagging of Seale could ever occur in a modern American courtroom, rather than being primed to understand it as merely a product of Judge Hoffman’s individual shortcomings. We might be asked to probe why the government was hell-bent on charging the Chicago 7 and on burying reports indicating that the disruptions in 1968 were the result of violent police provocations, not protesters. We might be asked to interrogate—and in turn, refuse to comply with—the bipartisan acceptance and promotion of law and order as some kind of objective good, even as piles upon piles of evidence demonstrate that US criminal legal institutions can never be reformed.

The system is not broken; it works as intended—to socially control, discipline, and repress anyone whose existence poses a threat to this country’s status quo of white supremacy, private property, and meritocratic individualism. As the real Abbie Hoffman wrote, “The dictionary of law fails us.” In our current moment, where calls to defund and abolish police have gained unprecedented public attention as the New Left’s principled anti-imperialism did in the 1960s, Sorkin’s reformist retelling of this history is disappointing, if unsurprising. What could have been a moment to make the New Left and Black radical critiques of police terror and US imperialism (which are, of course, thoroughly intertwined) salient, particularly when so many of them continue to be relevant today, instead becomes yet another piece of centrist propaganda. It is in the end nothing more than apologia, offering cheap catharsis for anyone looking to be absolved of their liberal guilt and affirmed in their squeamishness toward protest and dissent.