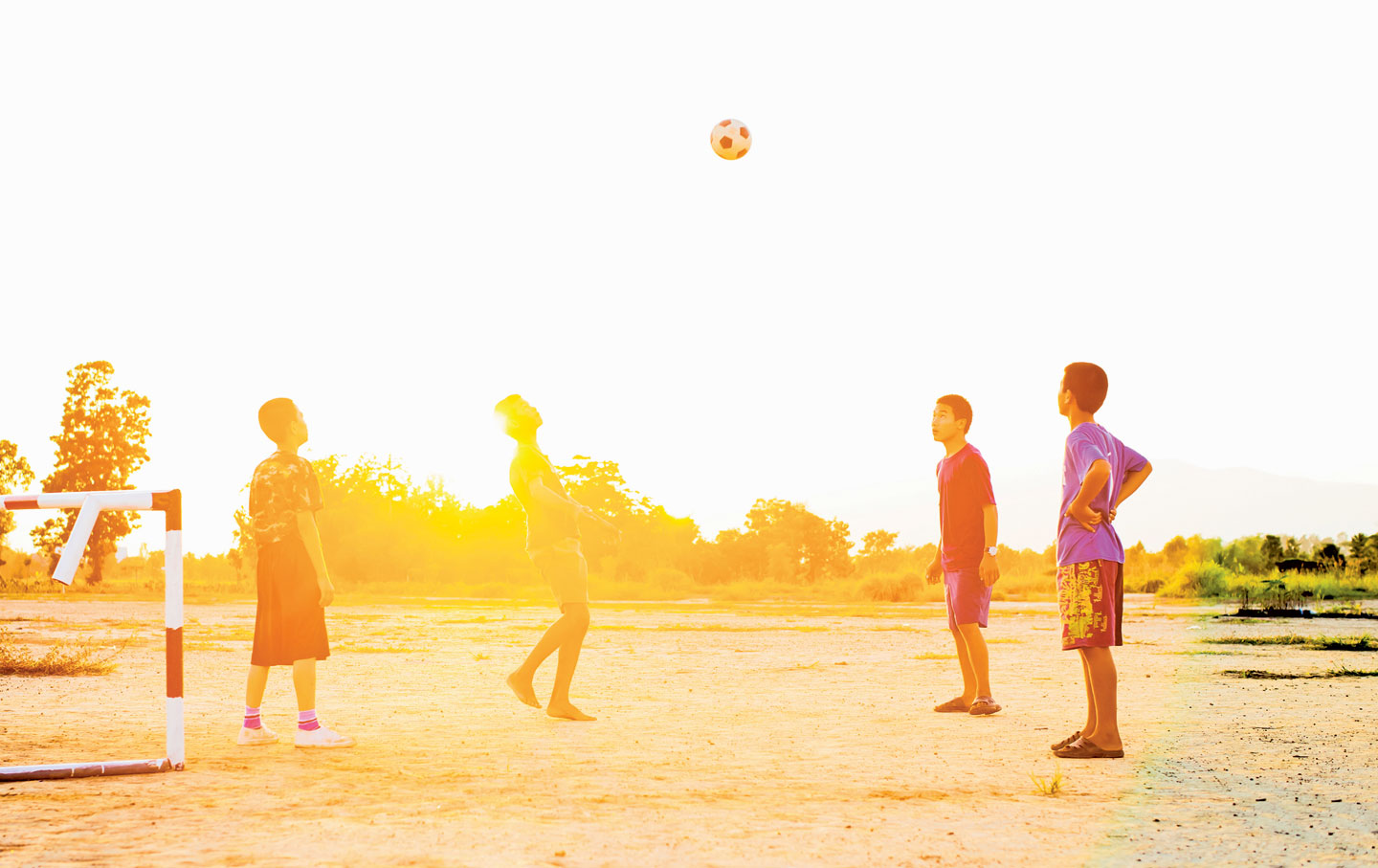 I love sports, but I hate so much of what sports have become. Playing sports should be an opportunity, especially for children, to exercise, make friends and, heaven forbid, have fun. As for the pro leagues, they have been and always will be a business first and foremost, but they should also be a sweet escape after a tough day—instead of something that makes you feel used and even dirty about enjoying.

If sports are ever going to be reclaimed, we need to put our John Lennon glasses on and actually start by daring to imagine. We need a new vision of what sports could look like, if they were run on a set of principles that weren’t about vacuuming every last dollar from our pockets.

So imagine a saner sports world—it’s easy if you try.

Imagine expanded recess time and daily physical education in our public schools—two things in short supply across the country—so that kids have the space and freedom to learn to love play, regardless of some grown-up’s judgment about whether they are “any good.”

Imagine a youth sports world that is not professionalized—one built around giving kids a lifelong love of healthy competition and teamwork instead of the ego-fulfillment of adults.

Imagine youth sports teams that aren’t rigidly segregated by gender, so that boys and girls who want to play together can play together—and kids who don’t see themselves as either a “boy” or a “girl” don’t need to feel excluded from what should be adventures in positive socialization. Let sports be something other than the first step toward the alienation that can fester between men and women. And if girls want their own teams, let them not only have access, but also equal fields and equipment.

Imagine a youth sports world that does not feel like a place where you don’t belong if you’re part of the LGBT community. Imagine a young men’s sports world where homophobia and violence against women are completely contrary to the values enforced by the locker room.

Imagine a college sports system without the NCAA! No more would we hear from a multibillion-dollar cartel policing a system of indentured servitude. The fact that the NCAA’s two revenue-producing sports happen to revolve around the talents of young black men speaks volumes. Stop the theft of black wealth through college sports, and instead treat players like the campus employees they are. And if they also want to pursue a degree, that should be encouraged—even highly incentivized. But we would all be better off without such profound hypocrisy and exploitation in our midst.

Imagine an end to all sports cartels. Imagine there’s no FIFA; no International Olympic Committee, too. Which doesn’t mean no more World Cup or Olympics—it just means an end to these two thoroughly corrupt, thoroughly discredited organizations that come into communities like neoliberal wrecking balls, bringing debt, displacement and the militarization of public space. We need a World Cup that reflects the beauty of the play on the field. We don’t need a World Cup that exploits the passion of fans for the benefit of the real-estate, construction, private-security and weapons industries. We need an Olympics that takes us back to the amateur ideal, highlighting sports that are normally ignored and showcasing the remarkable athleticism of women and men across the world—not an excuse for a host of construction projects that people would otherwise reject.

Imagine a sports media that did not live down to the words of Hunter S. Thompson, who once wrote that sportswriters are “a rude and brainless subculture of fascist drunks” and “a gang of vicious monkeys jerking off in a zoo cage.” The sports media should be holding the corrupt scandalmongers of sports responsible for the communities that they call home. Instead, the media are far too often cheerleaders for or broadcast partners with the very people they should hold accountable.

Imagine a pro-sports world where owners didn’t exploit our love for local teams to fleece municipalities out of billions of dollars. Imagine if they paid for their own damn stadiums.

Imagine a pro-sports world where owners did not use the public money they received as engines for their own political pet projects. No more money laundering through sports to support reactionary political agendas—as in Orlando, where the DeVos family has provided seed money for the Family Research Council to propagate homophobia and bigotry, and has also taken hundreds of millions in public funds.

Imagine, if you can, a pro-sports world without owners. “Why don’t we have the owners play half the games?” the new National Basketball Players Association executive director, Michele Roberts, asked rhetorically, speaking to ESPN The Magazine. “There would be no money if not for the players.” If taxpayers are paying for stadiums, why do we even need team owners? Imagine if every team operated like the Green Bay Packers—owned by 360,000 fans, with concession money going to local charities and never a threat that the team will be ripped away for a sweeter tax deal in another state. In other words, imagine teams that are a life raft for a community instead of an albatross around its neck.

Imagine a pro-sports world that didn’t use our love of sports as a delivery system for the next war. We don’t need Gen. David Petraeus flipping the opening coin at the Super Bowl any more than we need warplanes flying over the stadium. As Mary Tillman, the mother of the late Pat Tillman, once said to me: “Camaraderie is important to all humans, and I think the camaraderie of sports provides the most reward. Many young men join the military in order to get that feeling of belonging, that feeling of brotherhood. It is irresponsible to try to entice young people into military service with subliminal messages.” Sports is not war, and war is not a game. Sports—not to mention the soldiers—deserve better.

George Orwell once wrote: “Serious sport has nothing to do with fair play. It is bound up with hatred, jealousy, boastfulness, disregard of all rules and sadistic pleasure in witnessing violence: in other words it is war minus the shooting.” I do not agree with this in general, but it remains an apt description of sports at their worst. However, there is no reason why sports must always reach for the lowest common denominator.

That is a sports world—not to mention a real world—worth fighting for.