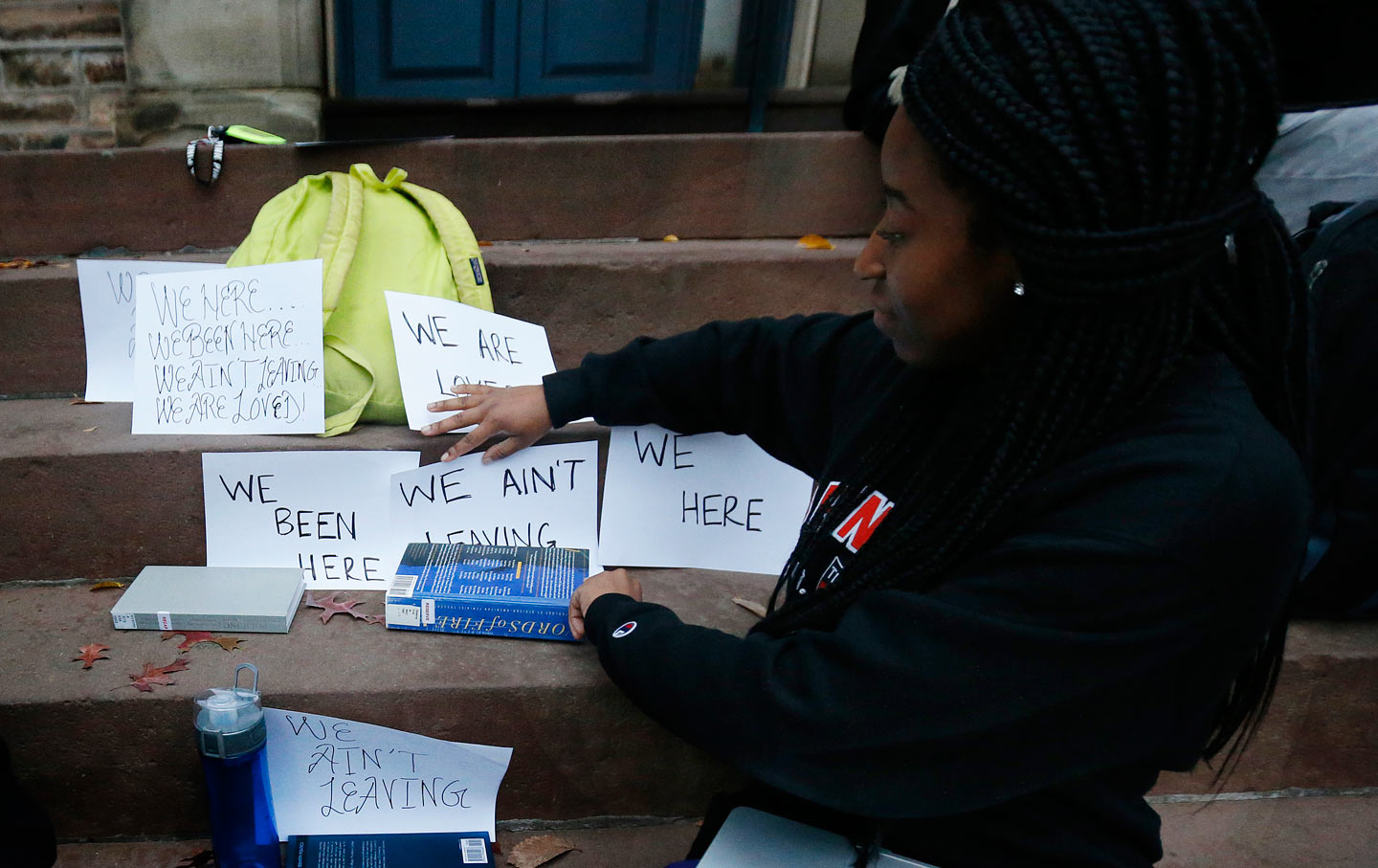 A student shows signs made for a sit-in demanding a range of changes to improve the experiences of black students, at Princeton University on November 18, 2015. (AP Photo / Julio Cortez)

When a group of Princeton students occupied the university president’s office earlier this month, and demanded, among other things, that the university remove Woodrow Wilson’s name from two campus buildings, they sparked a powerful debate about historical commemoration. As president of the university from 1902–10, Wilson shook up a sleepy conservative college and led it into the modern era. As president of the United States from 1913–21, he advocated for a League of Nations that would promote a new kind of internationalism in the wake of the First World War. When university officials named their school of public and international affairs after Wilson in 1948 and put his name on a residential college in 1966, those were the sorts of achievements they sought to honor.

But Wilson, as so many have pointed out in recent days, was also a Southerner with abhorrent racial ideas shaped by the culture of antebellum Virginia where he was born in 1856. Many Southerners held similar ideas about the inferiority of African-Americans, but Wilson was different because he held positions of power that enabled him to put thought into action. And his actions held very real consequences for African-Americans. As president of Princeton, he deemed it “altogether inadvisable” for black students to enroll (the first black undergraduate did not graduate until 1947). Later, as the nation’s chief executive, Wilson had an even broader arena in which to act, and his commitment to segregating the federal government had real and painful consequences for many African-American employees and their families.

The past surrounds us at every turn: in the laws and cultural practices that have shaped our institutions and personal experiences, in the material culture of our everyday surroundings, in the very names we put on buildings. The protesters at Princeton remind us of that. They remind us, too, that history is dynamic. It is not simply what happened in the past, it’s the stories we tell about it. And those stories get shaped by our present-day concerns. The university officials who put Wilson’s name on buildings cared about one aspect of his life. Some Princeton students, led by the activists of the Black Justice League, care about another, and they have raised important questions about Wilson that did not occur to that earlier generation of Princetonians. We cannot now change what Wilson did in his own lifetime. But we can think about new ways to understand and explain it. That’s the job of a university.

College campuses offer a space for students to express their concerns in many ways: in dining-hall conversations, in late-night dorm gatherings, even in occupations of a university president’s office. But what universities do best is to offer a space for the scholarly investigation of the facts and spirited informed debate within a classroom. At a moment when talk of “safe” spaces on campus centers around places where students can retreat to feel comfortable among a group of peers, we might also think about another kind of safe space: the classroom. At its best, it’s a place for confronting difficult ideas and troubling truths, a place to rethink received wisdom and frame new stories.

For several years now, I’ve taught a small undergraduate seminar to investigate with students whether and how the history of Princeton University might be entangled with the institution of slavery. My students understand that the Wilson dilemma is, in some ways, the dilemma of Princeton—and so many other early American institutions—writ small. Since the inception of this nation, liberty and racism have been intertwined. And that complicated heritage is inscribed upon many of America’s great university campuses, perhaps nowhere more so than Princeton, founded as the College of New Jersey in 1746.

In the spring of 1766, Samuel Finley, fifth president of the College of New Jersey, planted two sycamore trees in front of the President’s House to celebrate the repeal of the Stamp Act. The house stood near Nassau Hall, the central building on the campus. The white clapboard structure, now home to the university’s alumni association, is still framed by those aged trees, the living reminders—as tour guides note—of the college’s devotion to the Revolutionary cause.

Just a few months later, however, in July 1766, Finley died. His executors announced they would sell his possessions: furniture, cattle, books, and “two Negro women, a negro man, and three negro children.” “The Negro Women,” the executors explained, “understand all Kinds of House Work, and the Negro Man is well fitted for the Business of Farming in all its Branches.” The slaves not sold beforehand would be auctioned off on August 19 at the President’s House, in the shade of those young liberty trees.

The university takes pride in being the site of an American victory during the Revolutionary War, and of hosting the Continental Congress in Nassau Hall in 1783. The campus literature fails to note, however, that the first eight presidents of the university, serving until 1822, held slaves at some point in their lives. Early college regulations required prospective students to present themselves to the president for examination before enrolling in the school. For generations of Princeton students, the first person they met on campus may have been the enslaved man or woman who answered their knock on the president’s front door. Quite literally, if Nassau Hall provided the storied backdrop of Princeton University, slavery was the face of the school.

Contrary to popular myth, Princeton students—many of whom hailed from the South—did not bring their slaves to campus. College rules forbade that. But students on the late-18th- and early-19th-century campus lived in a landscape inhabited and shaped by enslaved people. Enslaved workers toiled at Prospect Farm, adjacent to the campus. They worked on Nassau Street, the main commercial road bordering the school. They lived and worked inside of the President’s House, for some decades one of only two buildings on campus.

Those of us who study and teach and work at Princeton thus inhabit a historical landscape marked by freedom and opportunity, as well as slavery and segregation. The paradox of Wilson’s life, that insidious racism intertwined with genuinely progressive political ideas, is woven into the very fabric of our university. Indeed, it exemplifies the central paradox of American history. The debates over Wilson’s legacy ought to remind us of that, and push us towards even broader conversations about the presence and power of the past in daily life. History matters. Unless we engage it, we cannot fully address the structural inequities that continue to mark American life.

Note: Sandweiss would like to thank Craig Hollander and the students in History 402: Princeton and Slavery for their work on the university’s history.