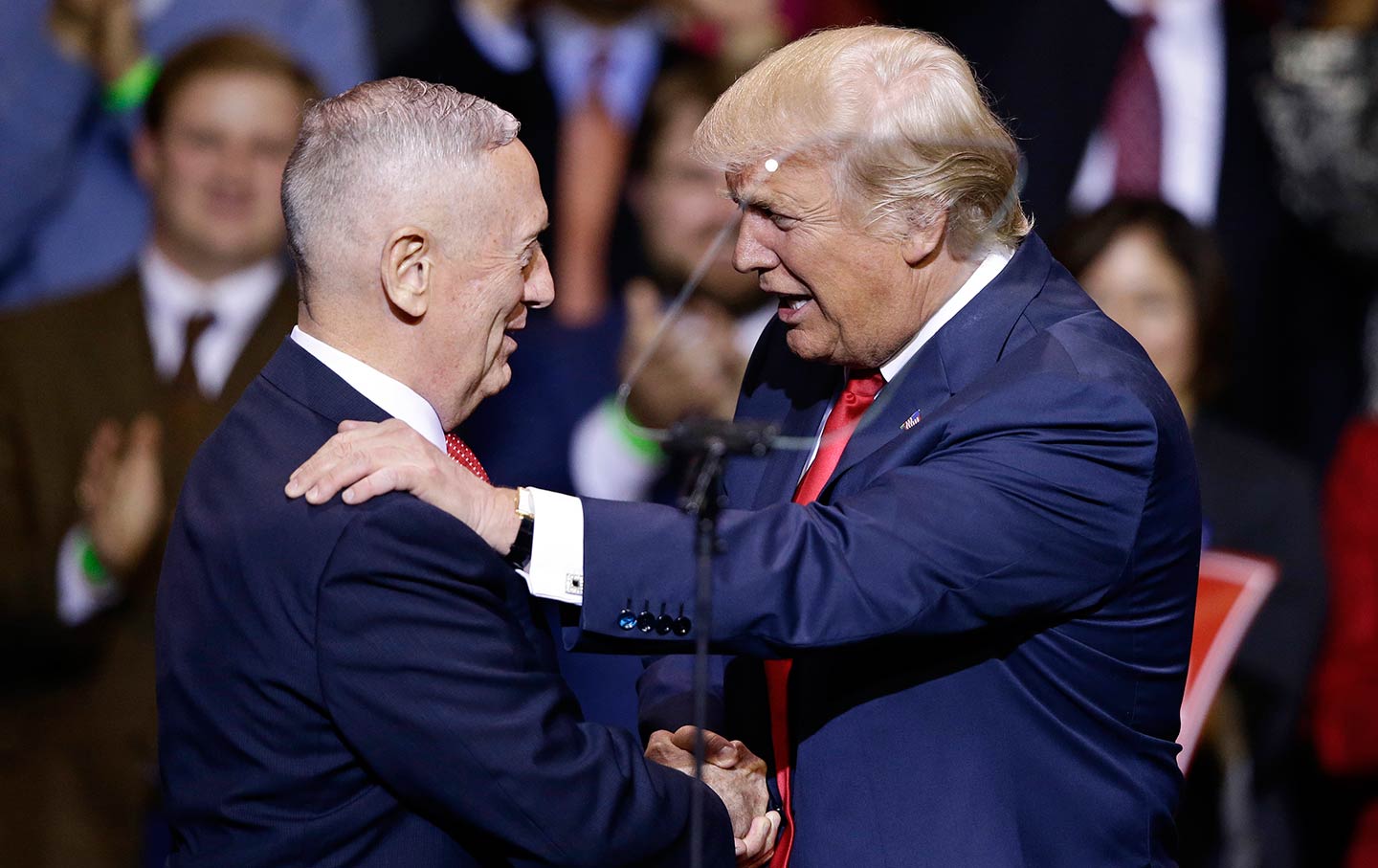 Today, following his “surprise” announcement at a rally in Cincinnati on Friday, President-elect Trump made it official: He is nominating Gen. James N. Mattis (ret.) for secretary of defense.

Trump’s choice of Mattis has raised eyebrows; a retired general has not served as defense secretary since 1950, when former Army chief of staff and, later, secretary of state George C. Marshall held the post. Some are concerned that the choice of Mattis might undermine the longstanding American principle of civilian control of the armed forces. Owing to such concerns, Mattis, who retired from active duty in 2013, will require a congressional waiver in order to serve. Already, however, New York’s junior senator Kirsten Gillibrand, a member of the Senate Armed Services Committee, has said she will oppose the waiver.

Trump’s decision to put retired Gen. Michael Flynn at the NSC and Mattis in the Pentagon means, among other things, that this is shaping up to be an administration of die-hard Iran hawks. And this is pretty much in keeping with Trump’s campaign rhetoric. As early as September 2015, when Trump addressed a Tea Party–sponsored rally opposing the Iran Deal (or the Joint Comprehensive Plan of Action, or JCPOA), he declared that the deal allows Iran to “rip us off, take our money, and make us look like fools.” The United States is “going to get nothing” from the deal, he said, because we “are led by very, very stupid people.”

Trump’s contempt for the Iran Deal (and those who brokered it) extends to US non-proliferation policy in general. Recall his breezy remarks during the campaign when he said he wouldn’t object if Saudi Arabia, Japan, or South Korea obtained nuclear weapons, since, as he told CNN, proliferation is “going to happen anyway.”

Worryingly, a Secretary of Defense Mattis would likely reinforce Trump’s oft-voiced inclination to scrap the Iran deal and pursue a policy that would seek to isolate, contain, and punish Iran, which is still viewed by the foreign-policy establishment, thanks to years upon years of AIPAC  sponsored agitprop, as “the world’s leading state sponsor of terror.”

Likewise, Mattis has declared that Iran “is the single most enduring threat to stability and peace in the Middle East.” Much like his fellow general and soon-to-be colleague in the Trump administration, Michael Flynn (who, as director of the Defense Intelligence Agency, sought to tie the Benghazi attacks to Tehran), Mattis has sought to connect the Salafi terror network ISIS to Iran.  In April, Mattis gave a talk in which he tried to make the link explicit, saying, “I consider ISIS nothing more than an excuse for Iran to continue its mischief. Iran is not an enemy of ISIS; they have a lot to gain from the turmoil that ISIS creates.” “What,” he asked, “is the one country in the Middle East that has not been attacked by ISIS? One. And it’s Iran. That is just more than happenstance, I’m sure.”

The Mattis nomination also comes amidst the recent push by Congress to extend sanctions against Iran. Last week, the Senate voted unanimously to extend the Iran Sanctions Act by 10 years (following a similar bipartisan push in the House in November). The reaction in Iran was swift. Ali Akbar Salehi, head of the Atomic Energy Organization of Iran, called the extension a “clear violation” of the deal.

It would hardly be a stretch, then, to surmise that the JCPOA is in jeopardy—especially since the plan had the support of only 42 Democratic senators (but, notably, not the support of incoming Senate minority leader Chuck Schumer) to begin with.

Thus far, Trump has stacked his national-security team with hard-line Iran hawks who are determined to see Iran and what is said to be its sphere of influence, the so-called “Shia crescent” (which stretches west from Tehran, through Baghdad and on through Damascus and Beirut), as the primary threat to peace and stability in the Middle East. This, while turning a blind eye to the far more insidious influence of Saudi Arabia and Qatar, to say nothing of the illegal and destabilizing presence of Israeli settlements in Jerusalem and the West Bank.

And so, if the Mattis nomination is any indication of things to come, Trump’s promise to pursue an “America First” foreign policy may prove to be, like much else about the president-elect, just talk.