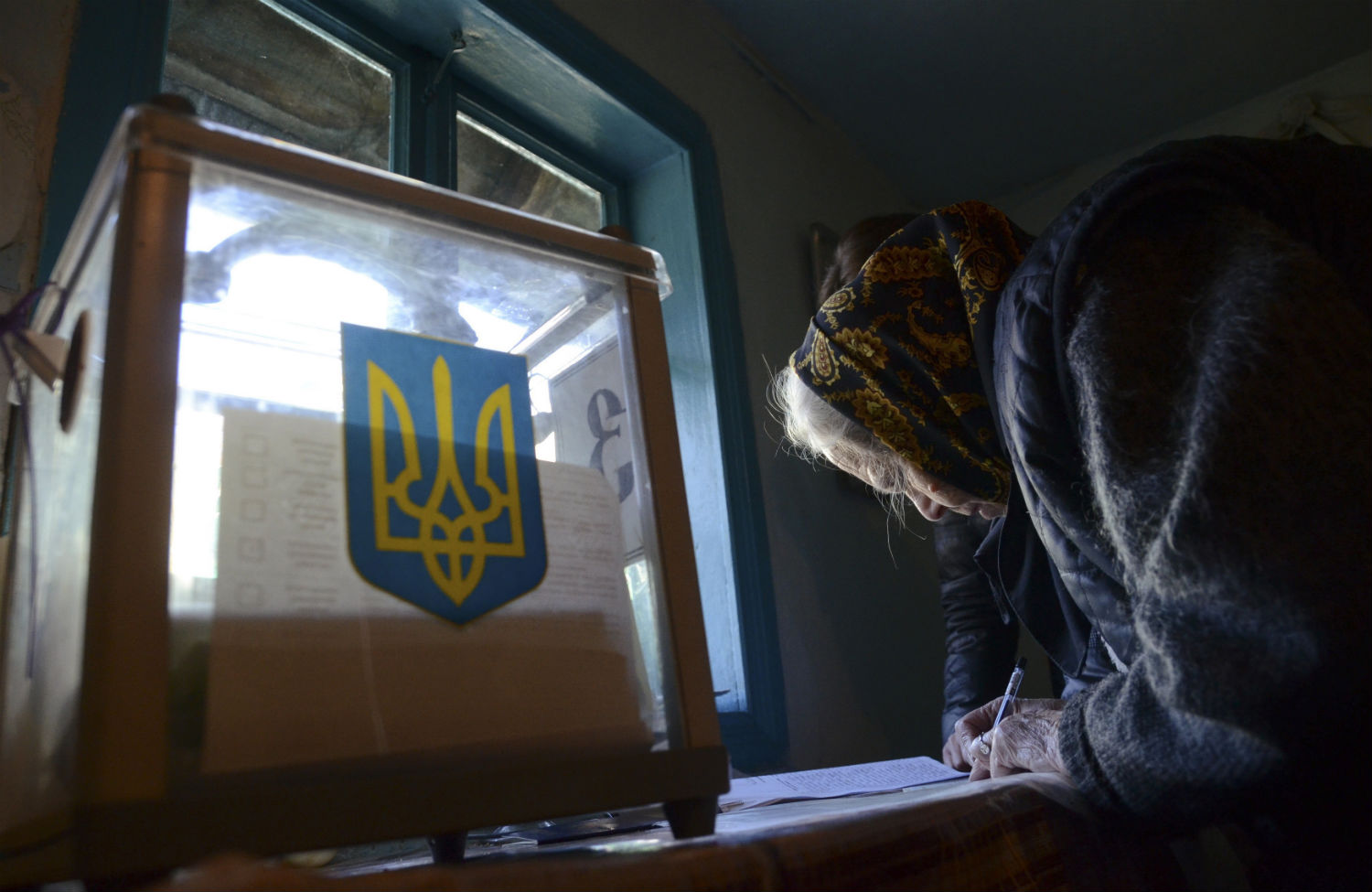 A resident fills out documents during a parliamentary election in Ukraine, 2014. (Reuters/Roman Baluk)

Including “Communist” in the name of a political party, selling a Soviet-flag souvenir or even singing the Soviet hymn would be punishable by up to 10 years in prison, according to a new law passed by Ukraine’s parliament.

The law “on the condemnation of the Communist and National Socialist (Nazi) totalitarian regimes in Ukraine and ban on the propaganda of their symbols” is ostensibly supposed to prevent the recurrence of Soviet-style repressions, but critics say it would limit free speech and marginalize the already embattled left. Although President Petro Poroshenko has yet to sign the law against communist propaganda, the bill received 254 votes and was sponsored by members of his own party, among others.

“Even if the state won’t be interested in persecuting Ukraine’s marginal, weak leftist organizations, the far right will likely use this law…to harass politicians and also scholars on the basis that they are not critical enough of the Soviet Union or are over-critical of Ukrainian nationalists,” Volodymyr Ishchenko, deputy director of the Center for Social and Labor Research and a member of the editorial board of the progressive journal Commons, told The Nation.

Meanwhile, another law passed last Thursday recognizes as independence fighters a controversial nationalist group accused of ethnic cleansing and collaboration with the Nazis.

The anti-totalitarian law is less wide-reaching than a bill introduced last year that proposed banning “communist ideology,” and it’s hard to disagree with its condemnation of the repressions conducted under the Soviet regime. But it also would give the authorities the power to shut down any organization that makes even oblique reference to the Communist tradition.

Public use of the symbols of the USSR or other Eastern Bloc countries, including the Soviet hymn and the hammer and sickle, would be punishable by up to five years in prison for an individual, or up to ten years for an organization. (The ban would apparently even include “The Internationale,” which the Soviet Union used as its national anthem until 1944.) If a political party, mass media outlet, or other group of citizens engages in “propaganda” valorizing the Communist or Nazi regimes or uses their symbols, it could be denied registration or ordered to cease its activities.

The law would also apparently legalize Ukraine’s “Leninfall,” the tearing down of Lenin monuments in cities around the country. Among the banned items are monuments, pictures or quotations featuring anyone who had the rank of district committee secretary or higher in the Communist Party, as well as monuments or pictures of actions committed by the Communist Party. In eastern cities like Kharkiv, where nationalists tore down the central Lenin statue in September, pro-Russian locals have previously defended such monuments.

It would also entail the renaming of a huge number of cities and streets, since it bans the use of names taken from Communist leaders and “connected with the activities of the Communist Party.” This huge and fraught bureaucratic challenge would be one more task on top of the many reforms demanded of Kiev under its loan program from the International Monetary Fund. More importantly, it would only contribute to the split in Ukrainian society, which has seen thousands in the largely Russian-speaking east take up arms against perceived persecution by a more nationalist government.

“The legislation bans citations of Lenin, which means that we’ll need to destroy half of our academic works, it bans all Communist symbols, which means a war veteran will forbidden from wearing the Red Star medal he shed his blood for,” said Pyotr Simonenko, the leader of Ukraine’s Communist Party, which will have to change its name. “All this is a path to an even bigger schism in Ukrainian society and a continuation of war.”

Even though the Ukrainian group Left Opposition has criticized the Communist Party for its defense of Vladimir Putin’s “conservative and imperialistic policies,” it also condemned the law, noting that it had been found to be overly harsh by the Ukrainian parliament’s own research department. In an analysis, the group argued that since the law forbids not only propaganda but also “information justifying the criminal character of the Communist regime,” almost anyone can be accused.

“This document will strike a blow to academic discussions, create an instrument for repression, and hinder the struggle against oligarchy and the creation of a real left alternative,” it wrote.

Bill sponsor Yury Lutsenko, a former internal affairs minister who was imprisoned under former president Viktor Yanukovych, argued that the legislation “doesn’t ban ideology, because that’s not acceptable in any democratic country.”

“This legislation bans a totalitarian regime under whatever colors it uses, fascist, communist, any others,” he told journalists.

But the law is not so much anti-totalitarian as it is anti-Russian, and its content dwells more on Communism than Nazism. Its sponsors pointedly pushed it through before the celebration on May 9 of the defeat of Nazi Germany. The St. George ribbon commemorating the Soviet victory has become a de facto symbol for the pro-Russian campaign in eastern Ukraine, which the Kremlin and the rebels have described as a similar struggle against fascism.

Communism is widely associated with Russian control of Ukraine, and the Ukrainian Communist Party, which had taken pro-Russian stances in the past, did not win any seats in parliament in the last elections, partly because it drew much of its support from the eastern regions now torn by conflict. Mikhail Pogrebinsky, a Kiev analyst who previously served as an aid to pro-Russian politician Viktor Medvechuk, called the law an act of Russophobia hidden under “anticommunist flare.”

Kiev-based analyst Vadim Karasyov, who supports the law, called it a reiteration of the government’s pro-European policy and a symbolic “final break with Russia, which is the successor to the Soviet Union.”

“Why did they pass it? Because in the economy there are no successes, but they need to show some results, so they pass laws that have a more symbolic character,” he said.

Other Eastern Bloc countries that left Russia’s orbit after the breakup of the Soviet Union, in particular Poland and the Baltics, passed similar anti-communist laws. But Ishchenko, who is working on an analysis of these laws, said the Ukrainian legislation is “far more repressive than laws in other European countries.” In particular, he said it limits academic research by stipulating that you can cite symbols or propaganda of a communist regime only if you’re not legitimizing it.

The legislation could also encourage far-right groups in their conflicts with leftist activists. During the Euromaidan protests in Kiev in the winter of 2013–14, nationalist groups intimidated and even attacked left-wing activists.

Even those who agree with the law’s content have questioned how it was adopted. “I’m not a supporter of communism and in general am a supporter of such laws,” Volodymyr Yavorskyy, a member of the Ukrainian Helsinki Human Rights Union, wrote on his Facebook page. “But for me, it’s going to far to pass so-called de-communization laws without discussion in parliament, without going through readings, without deputies having the chance to propose changes, without expert analyses.”

Perversely, the anti-totalitarian law reportedly softens regulations on pro-Nazi speech in one case: A section of article 436 of the criminal cade, which forbids “denying or justifying” the crimes of fascism, the Waffen-SS or those who “cooperated with the fascist occupants,” has been removed, leaving only a ban on using “symbols of the Nazi totalitarian regime.”

While it’s not clear why this article was changed, it could be seen to benefit some nationalist organizations. Notably, the pro-Kiev Azov volunteer battalion fighting in eastern Ukraine, many of whose members have expressed neo-Nazi views, uses the Wolfsangel symbol that was also employed by a Waffen-SS tank division. And one of the troubling legacies of today’s Ukrainian nationalists is that members of the Ukrainian Insurgent Army, their ideological predecessor, have been accused of collaborating with the Nazis.

Another law passed last Thursday declared fighters of the Ukrainian Insurgent Army and others to be “members of the struggle for Ukraine’s independence.” While the law would mainly entitle nationalist fighters to more government benefits, it also helps more firmly establish their reputation as heroes of the state, despite the fact that nationalists also reportedly orchestrated ethnic cleansing that killed thousands of Poles and Jews during the war years.

David Marples, a history professor specializing in Russia, Belarus, and Ukraine at the University of Alberta, called the law a “crude distortion of the past” that lumps controversial nationalist organizations like the UPA together with less ruthless ones, lending credence to Kremlin claims that the Kiev government is run by nationalists.

“Presumably now historians can be arrested for denying the heroism of [nationalist] Stepan Bandera or the father of the introducer of the bill, [UPA leader] Roman Shukheyvch,” Marples wrote in a blog post. “Russian trolls operating on social networks, very prominently featured in Western media over the past week, have now acquired new and authentic ammunition for their verbal arsenals.”

Karasyov said “some time needs to pass” before Ukraine will be ready for a “balanced view” of its 20th-century nationalist movement. “Now the authorities are rushing laws through, they often don’t take into account the opinions of southeast and opposition block,” he said, referring to the country’s more pro-Russian areas.

If the nationalists now in parliament have their way, the anti-totalitarian legislation may be only the start. Deputy Oleh Tyahnybok, the leader of the nationalist Svoboda Party, called on the government to go further and pass a “ban on communist ideology,” cancel pensions for former Soviet officials and completely ban the Communist Party’s activities.