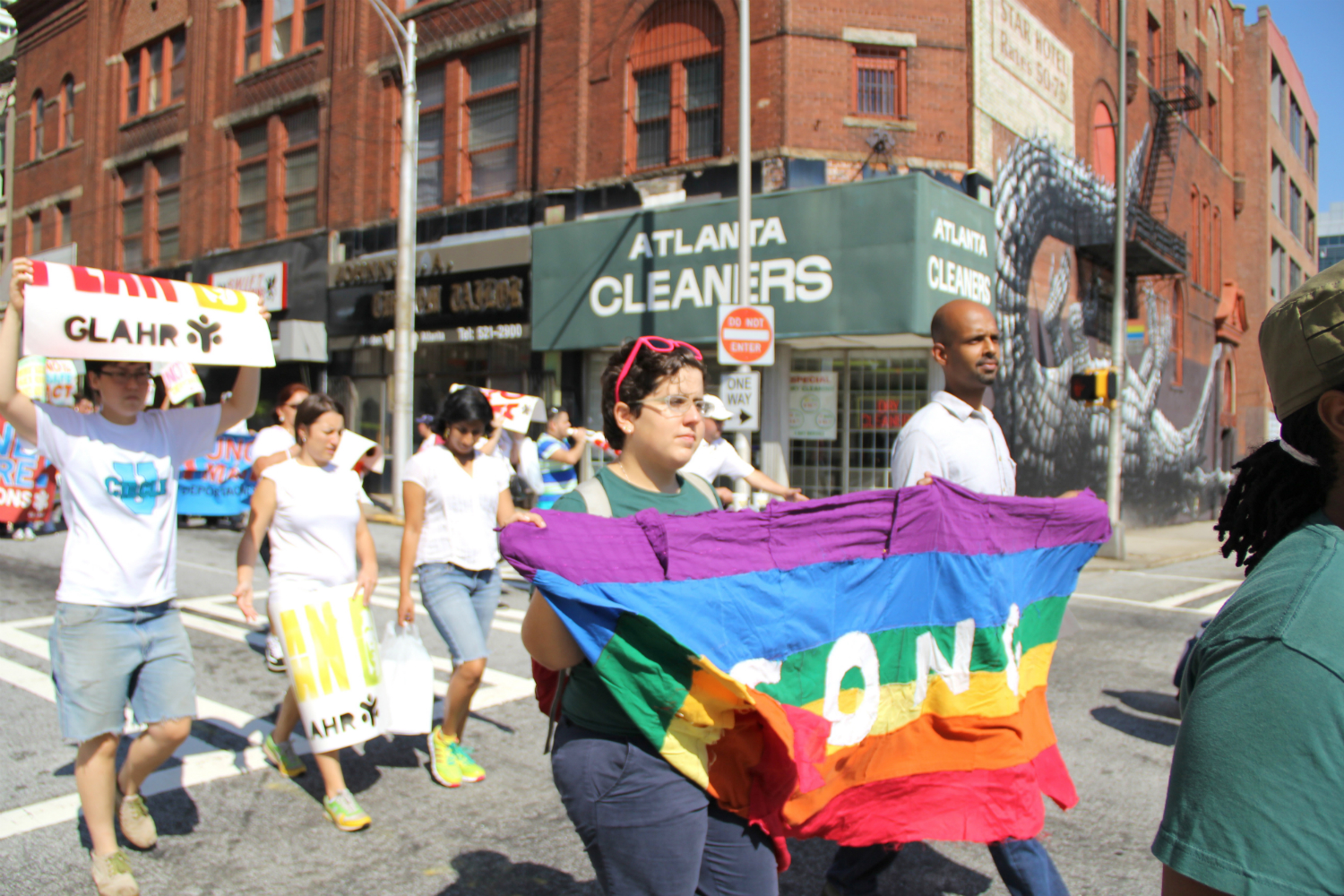 On Saturday, Human Rights Campaign (HRC) announced it would embark on a three-year, $8.5 million plan to shift policies, hearts and minds on LGBT issues in the South—specifically Alabama, Mississippi and Arkansas. The investment, called Project One America, is part of a larger effort to develop campaigns and candidates that will advance LGBT rights in parts of the country where legal discrimination is still common.

Money makes such wins possible, and a look at nationwide funding for gay and trans communities shows why the South has lagged behind. According to a recent Funders for LGBTQ Issues report, nearly a third of the nation’s LGBT adults live in the nation’s fourteen Southern states—in fact, a higher concentration of out people reside there than in any other region—but the South receives fewer resources than other part of the country. If grant dollars were distributed evenly among gay adult Southerners, each would receive about $1.71. Compare this to an out LGBT person in the Northeast who, using this same per capita calculation, receives just over $10. Someone in a state along the Pacific coast receives an estimated $9.35.

No one’s disputing a need for more resources, but organizers with longstanding ties to Southern LGBT communities—particularly communities of color—have a variety of ideas about how this influx of cash should flow. In interviews with a handful of activists, a few common threads of advice for HRC emerged: (1) Don’t prioritize same-sex marriage to the exclusion of other struggles, (2) address the region’s legacies of racism and poverty head on, and (3) respect organizing styles and messages that resonate with Southerners. The overall thrust of their advice? Project One America won’t succeed unless it partners with organizations that already have deep ties in these communities across lines of race and class.

Among the nine goals HRC has identified are broad statements like “Empower LGBT people (and straight allies) to come out… Create safer environments for LGBT young people… Build support for enduring legal protections that ensure LGBT equality.” There’s no specific talk about a legislative agenda—whether the goal be marriage, laws prohibiting discrimination on the job or anything else. fact sheet mentions each of its three target states’ constitutional bans on same-sex marriage and offers polling data on support for marriage among certain demographics. Otherwise, the topic doesn’t come up much in materials released thus far. Despite its announcement of a broad, inclusive focus, many of the people I talked to associate HRC specifically with the fight for marriage, a fight they say won’t meet the needs of the communities they serve.

Caitlin Breedlove is co-director at Southerners on New Ground (SONG), which has organized around LGBTQ issues in the South since 1993. SONG’s membership—approximately 3,000 people—is a third Latino, a quarter black, and other members are white, multiracial and indigenous, according to Breedlove. She said if HRC is serious about fighting on multiple fronts, that’s a welcomed shift.

“What they’re saying is that’s not the only emphasis, and we’re hoping that will be true,” Breedlove said of HRC’s indication that marriage won’t be its sole or even primary focus in the South. “We’re hopeful that this actually signals an interest in deepening the organizing around life and death LGBT issues.”

She said some “life and death” issues that need resources and attention include incarceration, deportation and police surveillance, none of which are discussed explicitly in Project One America materials. Breedlove took issue with HRC’s framing of “two Americas”—one in which LGBT communities as a whole have legal protections and another in which these protections don’t existent. The real divide, she said, is between which LGBT communities are criminalized and which aren’t.

“Most of the people in our base are wondering are their families going to be deported? Are their kids going to be shot for being black in the street?” Breedlove said.

Five years ago, Valencia Robinson founded Mississippi in Action, an organization that advocates on behalf of people living with HIV and supports reproductive rights statewide. Robinson, who identifies as a lesbian, was involved in organizing one of the state’s first black gay pride events in 2004. She’s been involved in black LGBT organizing spaces for years and has sat on the state NAACP’s religious affairs committee. Robinson has concerns about the HRC’s expansion based on her experiences participating in group town halls and meeting with national staff.

“It’s always the same people in the room,” she told me this week from Jackson. “HRC has had a presence here for the past three years, but it’s always been a fundraiser at somebody’s house. I call it the elite white gays. Very few people of color know about it.”

“I have yet to see a person of color work with HRC,” she continued. “In order to get buy-in from the community, you have to have a community person.”

By “community,” Robinson means the black community. Thirty-seven percent of Mississippi’s residents are black, compared to 27 percent in Alabama and 16 percent in Arkansas, the other states where HRC is focusing efforts. Failing to work with and center the needs of black LGBT people is bigger than just an optics problem. HRC runs the risk of crafting campaigns that don’t resonate with more than a third of the state.

“Until they’re ready to deal with race and class, they’re picking sexuality versus dealing with the whole person,” she said. “We’re worried about keeping our jobs. Can we go somewhere and live with our partners without being put out?”

Monica Simpson directs the Atlanta-based reproductive justice organization SisterSong and previously served as operations director for Charlotte, NC’s Lesbian & Gay Community Center. She’s also a founder of that city’s black gay pride events. Her earliest memories of connecting with HRC take her back to Johnson C. Smith University in Charlotte. Almost fifteen years ago, she and other students at the historically black college called on the organization to help them pressure the administration to deal with violence against gay students on campus. She says the collaboration started off great and included talk of HRC expanding its work on HBCU campuses more broadly, but the support wasn’t sustained.

“It was a sexy topic at the time,” Simpson said, and drew a connection to her fears about the organization’s current focus on the South.

“We don’t need a fly-in approach,” she said. “We need national organizations to fund the people who are already doing the work on the ground.”

Stephanie Guilloud is co-director of Project South, which supports grassroots organizers in Atlanta and across the region. Guilloud identifies as queer, sat on SONG’s board for nine years and says she can understand the trepidation surrounding HRC’s announcement.

“There’s a legacy of Southern organizers being wary of parachute politics, especially attached to resources that may not be thinking about long-term repercussions ten or twenty years down the line,” she told me. “When those kinds of resources come in, we believe in partnering with groups that really understand the South as a complex terrain.”

And beyond with whom you work is how you work.

“We organize like families,” Guilloud said. “Larger institutions that aren’t based in the South can often assume a lack of infrastructure, when there’s actually tremendous infrastructure made up of relationships and political trust.”

Language matters, too, Robinson of Jackson told me. Despite HRC’s stated commitment to working on issues other than same-sex marriage, the organization is associated with ways of talking about that goal that are off-putting to some in her community.

“Now gay marriage is the new civil rights, and for a lot of black folks, that’s an insult. Nobody’s getting dragged out of their homes, lynched because of their sexuality. You don’t have crosses being burned in your yard. You’re not being denied your voting rights,” she said. “In order to fight for marriage equality, you have to fight for racial equality, economic equality. We can’t deal with one part of a person.”

In a conversation Tuesday, I asked Project One America director Brad Clark whether having multiracial leadership is important for HRC’s work in the South. He responded simply, “Yes.” When I pressed for specifics on how the organization plans to accomplish this, he continued: “By making sure we have a lens around economic and racial justice.” Clark, an Iowa native who has worked on LGBT campaigns in that state and Colorado, said including people of color on local advisory committees and on staff hired to implement programming is a priority.

As for organizers’ fears that HRC will touch down for three years then take off for whatever issue or region is hot next, Clark said they’re unfounded.

“This is a new model for the organization. It’s a long-term commitment. It’s about investing on the ground, not parachuting in, having staff that live and work in the community over the long haul. It has to be really led by local leaders and people that have been doing this work, and taking a lot of that direction and leadership from them.”

Almost sounds as if local grassroots organizers and the big, flush national organization are aligned. But anticipating criticism and saying the right things to head it off are different from doing the daily work of growing an inclusive movement that meets Southerners where they are and takes them where they want to go. Time will tell whether HRC can meet that larger challenge.