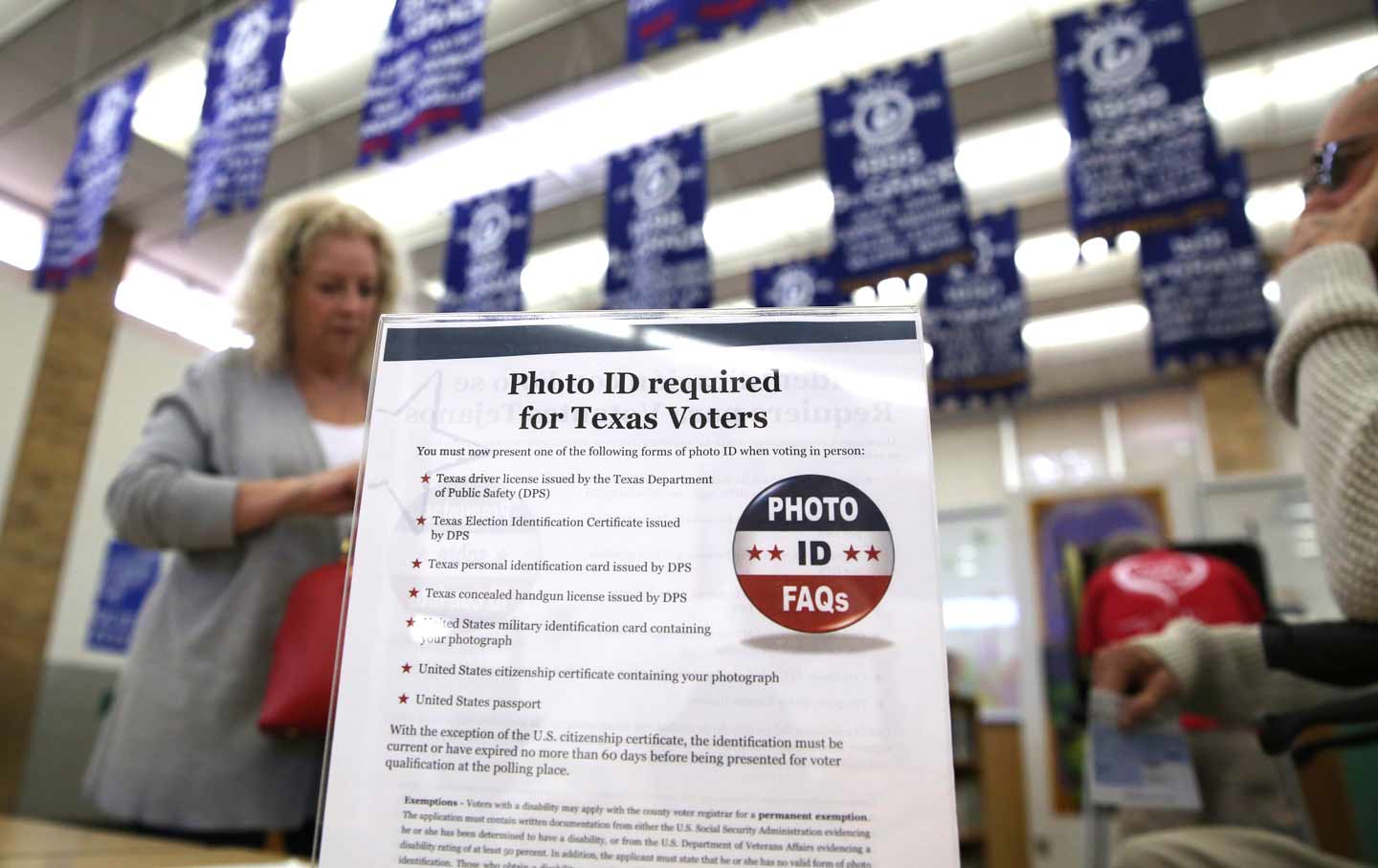 Voter-ID requirements are posted at a polling site in Arlington, Texas, in 2016. (AP Photo / LM Otero)

Imani Clark, a student at Prairie View A&M University, cast her first ballot in Texas by showing her state-sponsored student ID. But after Texas passed the country’s strictest voter ID law in 2011, she could no longer use that ID to vote (although she could have voted with a handgun permit) and has been unable to cast a ballot, most recently on Super Tuesday.

Clark, a plaintiff for the NAACP Legal Defense Fund, has been on the winning side of three different court challenges to Texas’ voter ID law under the Voting Rights Act, yet the law remains in effect because of judicial wrangling, and she still cannot vote. Her years-long wait to cast another ballot will grow longer with the decision yesterday by the United States Court of Appeals for the Fifth Circuit to allow the full court to decide the case.

The Fifth Circuit, which has jurisdiction over Louisiana, Mississippi, and Texas, is the most conservative appeals court in the country, with 10 GOP-appointed active judges versus only five Democratic-appointed ones. That doesn’t bode well for voting-rights advocates. And with the Supreme Court deadlocked in Scalia’s absence, the Fifth Circuit could be the final word on the matter.

The voter ID law should have never seen the light of day and is a case study for the devastating impact of the Supreme Court’s ruling gutting the VRA. Texas originally submitted it for federal approval under Section 5 of the act, and a federal district court in Washington blocked the law from taking effect because 600,000 registered voters lacked a government-issued ID in Texas, with black and Hispanic voters two to three times as likely as whites not to have one. The court called Texas’ evidence “invalid, irrelevant, and unreliable,” and said: “We have little trouble concluding that Texas has failed to carry its burden.”

But after the Supreme Court ruled in June 2013 that states with a long history of voting discrimination no longer had to approve voting changes with the federal government, Texas’ ID law went into effect within two hours.

There was another lengthy trial, and the law was blocked again by a federal district court in Texas on October 9, 2014. Judge Nelva Gonzales Ramos called the law an “unconstitutional poll tax” and said it was passed “because of and not merely in spite of the voter ID law’s detrimental effects on the African-American and Hispanic electorate.”

That decision stood for only five days before the Fifth Circuit reinstated the law for the 2014 election, faulting Ramos for blocking it so close to the election. The Supreme Court affirmed the appeals court decision three weeks before the election—the first time since 1982 that the Supreme Court had declined to block a voting measure deemed intentionally discriminatory by a trial court. “The greatest threat to public confidence in elections in this case is the prospect of enforcing a purposefully discriminatory law, one that likely imposes an unconstitutional poll tax and risks denying the right to vote to hundreds of thousands of eligible voters,” Ruth Bader Ginsburg wrote in her dissent.

As a result, many longtime voters were turned away from the polls during the 2014 election in Texas.

On August 5, 2015, a day before the 50th anniversary of the VRA, the law was blocked for a third time by the Fifth Circuit, which agreed that it “disproportionately impacts Hispanic and African-American voters” and “interacts with social and historical conditions in Texas to cause an inequality in the electoral opportunities enjoyed by African-Americans and Hispanic voters.”

However, the court disagreed with Ramos’s finding that the law was intentionally discriminatory and asked the lower court to re-review the case. The Fifth Circuit then waited six months to decide, on March 9, 2016, that the full court should rehear the case—three-and-a-half years after the law was originally struck down. In the meantime, the law was allowed to remain in effect, and people like Imani Clark were once again blocked from voting on Super Tuesday.

The endless fight over Texas’ law shows why courts matter so much—not just the Supreme Court, but lower courts as well. There have been two vacancies on the Fifth Circuit for over two years, because the Senate has refused to confirm President Obama’s nominees for the bench.

It also shows the danger of a paralyzed Supreme Court when the 2016 election is the first in 50 years without the full protections of the VRA. The court’s “conservative era” may be over with Antonin Scalia’s death, as Dahlia Lithwick writes, but a new progressive era will not begin until Obama or the next Democratic president gets to appoint his replacement.