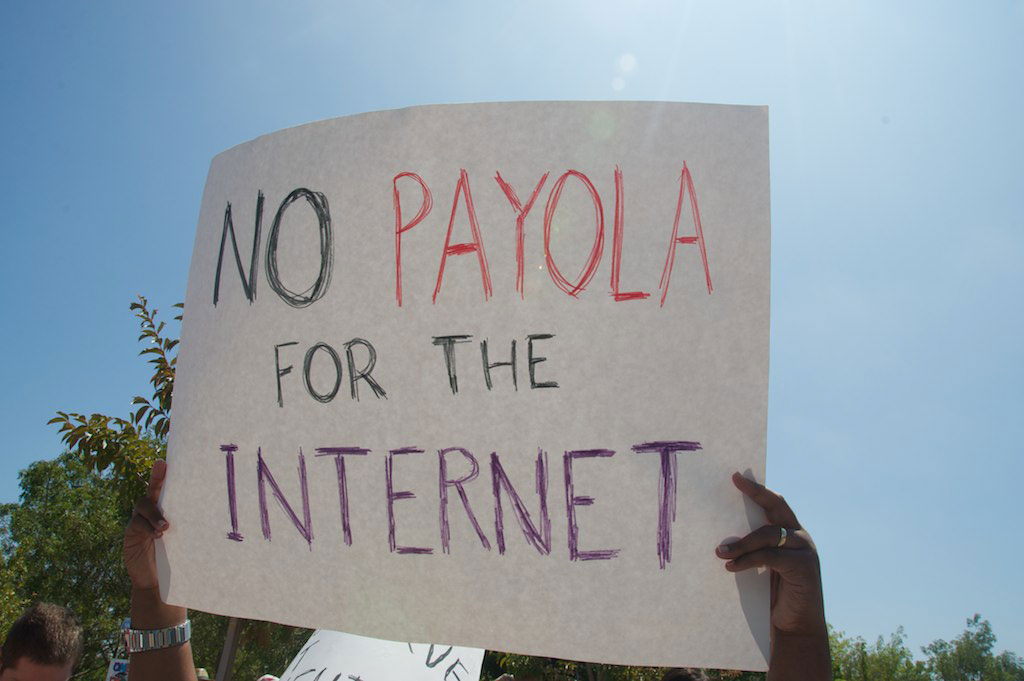 about the need for citizens to rise up and defend net neutrality—also known as the First Amendment of the Internet, because it provides the guarantee of free speech online for all.

If the FCC allows the “paid prioritization” of some websites and communications over others—as has been proposed under a plan the commissioners recently voted 3 to 2 to consider—the basic premise of a free and open Internet will be undermined. In a digital age, this threatens a lot more than online shopping. “Profits and corporate disfavor of controversial viewpoints or competing services could change both what you can see on the Internet and the quality of your connection,” warns the ACLU. “And the need to monitor what you do online in order to play favorites means even more consumer privacy invasions piled on top of the NSA’s prying eyes.”

The threat is real. Public interest groups warn that under a plan developed by FCC chair Tom Wheeler, cable and telecom companies could shape a pay-to-play Internet, in which they charge cash-rich corporations and special-interest groups to provide high-speed service while consigning websites without billionaire benefactors to a digital dirt road. Wheeler’s plan comes in response to an appeals court ruling that scrapped a previous FCC attempt to preserve net neutrality. A Democrat, albeit one with a background as an industry lobbyist, Wheeler says he wants to maintain an open Internet. But he’s going about it the wrong way. His plan is much like the one the courts rejected: he envisions a complex set of rules that would require the FCC to constantly “scrutinize” these pay-for-priority schemes for certain websites, apps and online services.

That won’t work, legally or practically. “Unless the chairman reverses his fundamentally failed approach, we won’t have real net neutrality—and we will have rampant discrimination online,” explains Matt Wood, a communications policy lawyer who has worked with the Media Access Project and Free Press. “The FCC can’t prevent online discrimination and blocking unless it reclassifies broadband providers as common carriers.” If that happens, broadband providers can be regulated as utilities that must provide equal and affordable access to an essential service.

Consumers Union policy counsel Delara Derakhshani calls reclassification “the best way to ensure an open Internet and to protect consumers.” But getting that protection depends on what the five commissioners hear from the public during the four-month comment period that’s now open. Feeling the heat from Free Press, Common Cause, the Future of Music Coalition, leaders of the Congressional Progressive Caucus and Internet firms like Google—and tens of thousands of letters and e-mails from concerned citizens—Wheeler opened up more space for discussion. The two GOP commissioners, who want to hand the debate off to Congress, will resist. But Democrats Jessica Rosenworcel and Mignon Clyburn are actively encouraging citizen involvement, with Clyburn urging the public to see the comment period as a “call to action.” Americans must answer that call (to do so, go to FCC.gov). All five commissioners—especially chairman Wheeler—should hear the public demand that net neutrality be saved. Then broadband providers can be reclassified and regulated in the public interest, and the Internet can remain free.