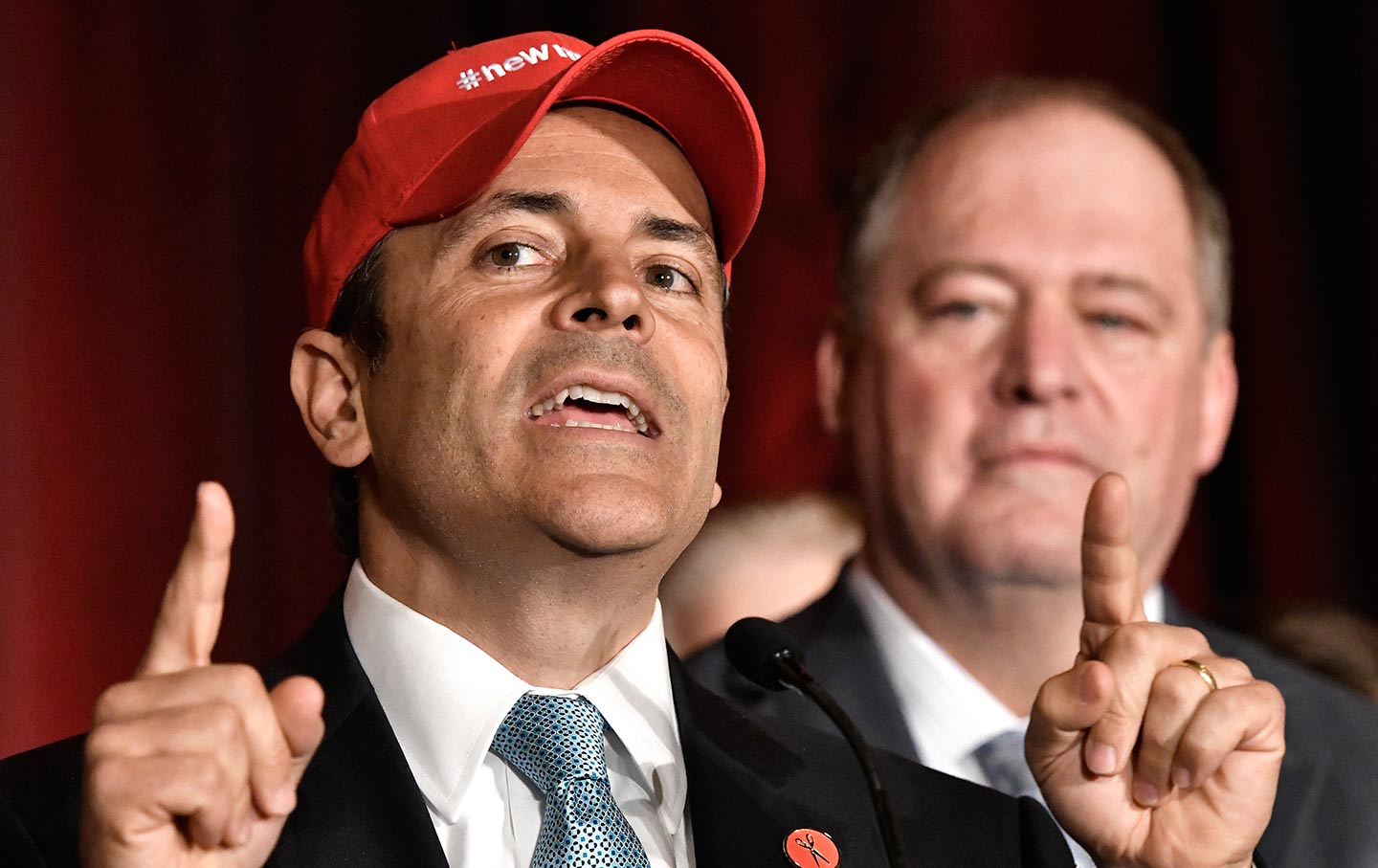 “A lot of working people voted for change in this election,” argued Bill Finn, the director of the Kentucky State Building and Construction Trades Council, as Kentucky legislators were shredding labor rights in the Bluegrass State. “They didn’t vote for this. They didn’t vote for a pay cut.”1

Finn got that right. Kentucky Republicans launched the new year with a race to enact sweeping anti-labor legislation, and they weren’t concerning themselves with the question of whether they had a mandate to assault labor unions and undermine wages and workplace protections. They are moving immediately, aggressively, and thoroughly to implement an across-the-board assault on workers and the unions that represent them.2

And with just two weeks to go before Donald Trump is inaugurated as president, Kentucky Republicans were doing something else. They were providing a powerful reminder of the threat to working families that arises when Republicans gain “trifecta control” (taking charge of the executive branch and both legislative chambers) of the governing process. Until this year, Democrats controlled the Kentucky House of Representatives and were able to block anti-labor legislation that was advanced by Republican Governor Matt Bevin and his allies in the Republican-controlled state Senate—with strong backing from national anti-union groups financed by the Koch brothers and other billionaire donors. But in November Republicans won a majority in the Kentucky House. That gave them complete control of the process, and they made it their first priority to approve anti-labor measures.3

Union busting moved onto a fast track in Kentucky, where Republican legislators refused to even consider the arguments of workers, community leaders, responsible business owners, and academics who explained that assaults of worker rights do little or nothing to promote economic development—and much to harm working families. Among those expressing thoughtful opposition to the anti-union measures that were approved by Kentucky legislators was Bishop John Stowe of the Roman Catholic Diocese of Lexington, who wrote in an open letter that “The weakening of unions by so-called ‘right to work’ laws, has been shown to reduce wages and benefits overall in the states where such laws have been enacted. This cannot be seen as contributing to the common good.”4

When Republicans take full control of the executive and legislative branches of government, workers are threatened.

Unfortunately, there was no stopping Kentucky’s newly empowered Republicans. They were on a deliberate and determined mission that was not going to be delayed by economic, social, or moral arguments. “The chants of union workers were little deterrent to Gov. Matt Bevin and his GOP colleagues in the Kentucky House and Senate, who have made approving the bills their top priority of the 2017 General Assembly,” the Lexington Herald-Leader reported Wednesday. “Shouts and banging could be heard from the hallway, but the meeting room itself was packed with supporters as the House Committee on Economic Development and Workforce Investment passed House Bill 1, which would allow workers to avoid paying union dues even if they work under a union-negotiated contract, and House Bill 3, which would repeal the prevailing wage law.”5

By the weekend, the anti-labor initiatives had been approved.

Kentucky is just one state. But this is not a one-state phenomenon. Kentucky Republicans followed a playbook written by Republican governors such as Wisconsin’s Scott Walker. That playbook suggests that, upon grabbing the reins of power, Republicans should move immediately to undermine unions that might support Democrats and that argue for maintaining public services and public education. Former Indiana governor Mike Pence, the incoming vice president, is a Walker-allied anti-labor zealot. And he is already working closely with House Speaker Paul Ryan, a Walker ally from Wisconsin, and Senate Majority Leader Mitch McConnell, who praised the anti-labor push in his homestate of Kentucky, on the new administration’s agenda. Trump has already sent a strong anti-labor signal with the nomination of corporate CEO Andrew Puzder, a harsh critic of proposals to raise the federal minimum wage, to serve as secretary of labor.6

No one should be fooled by this president-elect’s attempts to portray himself as a friend of workers. Trump and Pence were elected on a militantly anti-labor Republican platform that is dismissive of the federal minimum wage, declaring (in a stance similar to the one Trump appears to have evolved toward) that decisions about base hourly wages “should be handled at the state and local level.” That platform endorsed the anti-union “right-to-work” laws enacted by Republican governors such as Walker, and calls for taking the anti-union crusade national with a proposal “for a national law” along “right-to-work” lines. The 2016 GOP platform also attacked the use of the Fair Labor Standard Act to protect workers; ripped the use of Project Labor Agreements to raise wages and improve working conditions; and proposed to gut the 85-year-old Davis-Bacon Act, which guarantees “prevailing wage” pay for workers on federal projects.7

There may still be a few Republicans who recognize the historic GOP position, as stated by President Abraham Lincoln, that “Labor is prior to and independent of capital. Capital is only the fruit of labor, and could never have existed if labor had not first existed. Labor is the superior of capital, and deserves much the higher consideration.” But they are few and far between. And the evidence from Kentucky suggests that the combination of a Republican executive with Republican-controlled legislative chambers — which the United States will see on January 20 — must be recognized as a threat to workers.8

Trumka was right to be wary. Workers should be preparing, with a sense of urgency, to push back as the Republicans who control the White House and the Congress bring their anti-union agenda to Washington.11