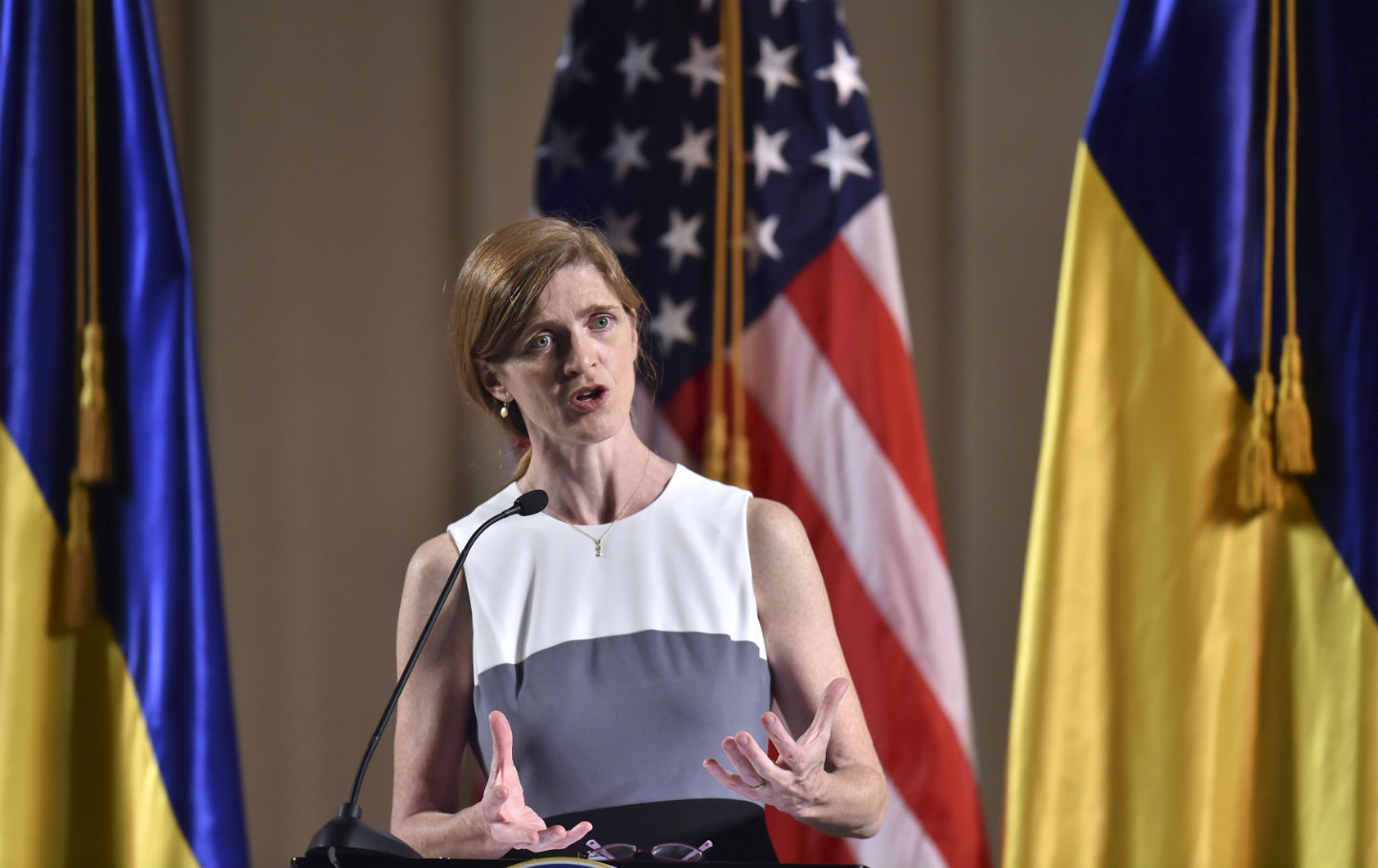 On Wednesday the US House of Representatives passed an amendment to the Defense Appropriations Act which prohibits the US from providing arms, training, and other assistance to the neo-Nazi Ukrainian militia, the Azov Battalion. This development was a welcome respite from the relentless push by the war party, a bipartisan group of legislators, government officials and their allies in the media, which seek conflict with Russia over the crisis in Ukraine, to undermine Secretary of State John Kerry’s diplomatic outreach to Russia in May.

Only a month ago, May 12, Kerry, after having met with Russian President Vladimir Putin for over four hours, stood with Russian Foreign Minister Sergei Lavrov at a press conference in Sochi where he expressed “President Obama’s gratitude for Russia’s willingness to engage in this discussion.” Reacting to reports that Ukrainian President Poroshenko had pledged to retake rebel held territory by force, Kerry warned that the US “would strongly urge him to think twice not to engage in that kind of activity.”

Lavrov’s own impression of the Sochi meeting reflected, in retrospect, undue optimism, telling a reporter from the state-owned Russian news channel Rossiya 24 in late May that he believed Kerry’s trip to Sochi likely meant “that there is an understanding in Washington that we need to build bridges and end this unfortunate period in our relations.”

Given President Obama’s statements following the completion of the latest G7 summit on Tuesday in Krun, Germany, it would seem that Washington is a long way off from such an “understanding.” Trumpeting Russia’s “isolation” from the G7, the President noted with evident satisfaction that thanks to the EU’s sanctions regime “Russia is in deep recession” and the group stands ready to “impose additional, significant sanctions.” Mr. Obama’s rhetoric at the G7 had a positively Cold War tinge to it, asking of the Russian President: “Does he continue to wreck his country’s economy and continue Russia’s isolation in pursuit of a wrong-headed desire to re-create the glories of the Soviet empire?”

What accounts for the abrupt change in tone between Sochi and Krun? Much of the explanation lies in the fact that in the month leading up to the President’s appearance at the G7, the war party, temporarily set back on its heel by Kerry’s diplomacy at Sochi, rallied.

Three days after Kerry departed the Black Sea region, his Assistant for European and Eurasian Affairs, Victoria Nuland arrived for talks in Kiev. That same day State Department spokesman Jeff Rathke spun the meaning of Kerry’s talks at Sochi, presenting them in a far different light than Kerry himself had, declaring that the Secretary “was clear with Russia—President Putin, Foreign Minister Lavrov—about Ukraine and about the consequences for failing to uphold the Minsk commitments.” In this way Kerry’s diplomatic outreach to the Russians was spun as a scolding of the Russians.

The Department’s backpedaling from Sochi, along with Nuland’s arrival in Kiev, was followed by a number of provocative actions on the part of the Ukrainian government beginning, on May 21, with the decision to blockade the pro-Russian enclave of Transnistria. This was followed by the appointment, on the 29th, of former Georgian President Mikhail Saakashvilli to the governorship of the Odessa oblast. Given Saakashvilli’s close ties with the US-neoconservative lobby and his long simmering feud with Russian President Putin, his appointment is a near guarantee of more unrest in the deeply divided Black Sea province

Meanwhile, in the US, the hawks took aim at Kerry. Julianne Smith, a former top national security adviser to Vice President Joe Biden, complained to the New York Times that Kerry’s trip to Sochi was “counterproductive” and that “it created this kind of cloud of controversy around what is the U.S. strategy, why did he go?”

Then, perhaps coincidentally—though, perhaps not—story after story began to appear touting yet another imminent Russian invasion of eastern Ukraine. On May 27, Reuters declared that Russia was massing “heavy firepower on border with Ukraine.” (By one count Reuters has published, like clockwork, 13 headlines trumpeting a forthcoming Russian “invasion” in as many months). Bloomberg View went one further, when neoconservative stenographer Josh Rogin repeated unverified claims by Congressmen Mack Thornberry (R-TX) and Seth Moulton (D-MA) that Russia has dispatched “mobile crematoriums” into the territory of eastern Ukraine in order to hide evidence of Russian casualties.

Worse still, in the days since Obama’s statement in Krun, the war party, led by the Washington Post editorial page, has doubled down on the pro-Kiev line. To mark this week’s visit of Ukraine’s Prime Minister Arseny Yatsenyuk and its American-born Finance Minister Valerie Jaresko to Washington, the Post published an op-ed demanding further American assistance by Yatsenyuk on June 9th, an editorial pleading for greater American involvement in the crisis on the 10th, and a report from its diplomatic correspondent regurgitating the claims of both later that day.

The Post, along with most of the Beltway media, continues to focus attention on the sins of Moscow while blithely ignoring those of Kiev, which, in continuing both its economic blockade of the Donbas and its refusal to negotiate with the leaders of the breakaway regions in Donetsk and Luhansk, is in violation of Minsk II accords.

The double standard extends to the Obama administration, which, on June 11, sent UN Ambassador Samantha Power to Kiev for talks with President Poroshenko. Poroshenko reportedly gushed to the visiting Power: “you cannot imagine how famous you are in Ukraine.” For her part, Power took to Twitter to declare that the “US stands w/you as you fight on two fronts: countering Russian aggression and building an open, responsive govt.”

The war party’s motives in ginning up the anti-Russian hysteria in both Kiev and Washington are threefold: to undermine Kerry’s diplomatic effort in Sochi; to bolster the EU’s resolve in holding the line on sanctions; and, worst of all, to drive a stake through the heart of Minsk II.

All of this points to the very real danger of a renewed outbreak of hostilities in eastern Ukraine. Yet given the continuing efforts of the bipartisan war party, it is worth repeating that there is no military solution to the crisis in Ukraine. In order to stop the catastrophic humanitarian crisis that is continuing to unfold in the Donbas, Russia and the Western allies must take steps to fully implement the Minsk II accords.

The renewal of sanctions in Europe at the end of this month, combined with the continuing calls in the US to arm Kiev, will do little to bring about a peaceful denouement to the crisis.