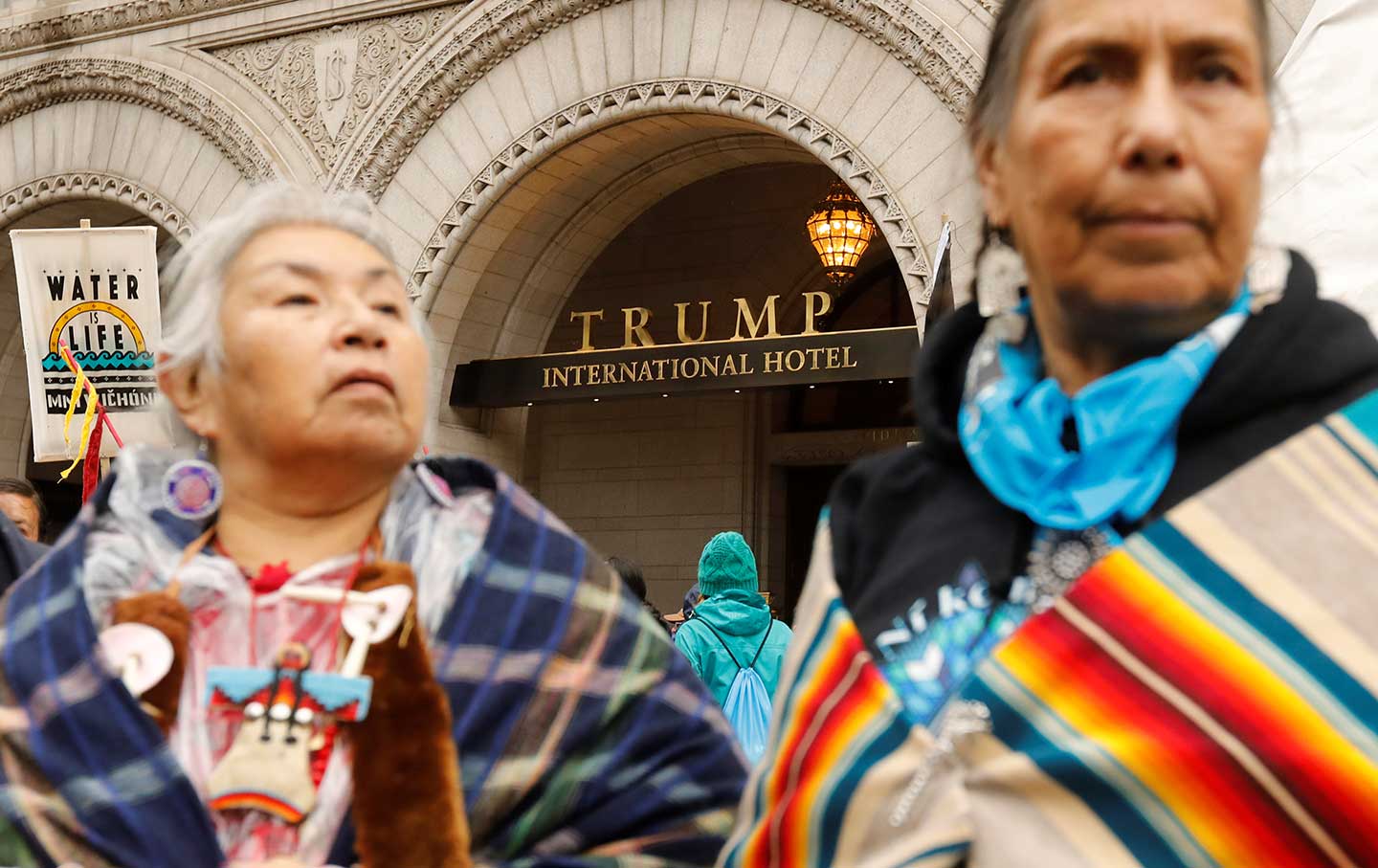 Indigenous women take part in a rally in front of the Trump International Hotel to protest the Dakota Access and Keystone XL pipelines in Washington, DC, March 10, 2017. (Reuters / Kevin Lamarque)

Donald Trump and the Keystone XL pipeline are made for each other—both are built on a cascade of outrageous lies—so of course the Republican president is now promising to make the pipeline a reality. Candidate Trump said the pipeline, which would transport tar-sands oil from Canada to refineries in Texas, would boost energy independence, put Americans to work, and be built with US steel. The truth? Keystone oil would be sold on the global market, create almost no permanent jobs in the United States, and rely on foreign steel. Oh, and it would accelerate global warming on a planet whose ice caps are already melting at record speed, raising sea levels and triggering drought and other extreme weather events the world over. “We’re importing Russian steel to build a foreign-owned pipeline so Canada can export its oil so we can create 35 American jobs,” tweeted Ross Hammond, the US campaigns director for Stand.earth, one of the many activist groups that are pledging ferocious resistance.1

China is racing as fast as anyone in the move to clean energy.

Trump’s bid to revive Keystone XL is but the most high-profile fight he is picking on climate policy. On March 28, he issued executive orders aimed at undoing other key elements of Barack Obama’s climate record: the Clean Power Plan; a moratorium on new coal leases on public land; restrictions on methane emissions; and a requirement that federal agencies consider the social cost of climate damages in their decision-making. Trump had previously proposed a 31 percent budget cut for the Environmental Protection Agency, whose administrator, Scott Pruitt, ludicrously asserted that carbon dioxide is not a “primary contributor to…global warming.” Candidate Trump had promised all of this as well, assuring heartland voters that he would bring back coal workers’ jobs instead of sacrificing them to a Chinese “hoax” about humans broiling the planet beyond habitation. Trump reiterated these promises when signing the new executive orders, telling a handful of coal miners flanking him, “You know what this is, right? You know what this is? You’re going back to work. You’re going back to work.”2

But Donald Trump promises a lot of things. Making good on his promises is something else entirely, as congressional Republicans were reminded by their botched attempt to repeal Obamacare. Along with the Muslim travel ban, the Obamacare debacle marked the second time in Trump’s infant presidency that he was rebuffed on a core agenda item. Will Keystone XL and his larger climate-wrecking program fare any better?3

Don’t count on it. Political, legal, and economic obstacles abound. Not only are activists pledging to fight Trump on all fronts, including regulatory challenges to Keystone XL in Nebraska and a march on Washington on April 29, but key state and local governments say they remain committed to fighting climate change and prioritizing clean energy. The governors of California, Oregon, and Washington and the mayors of their biggest cities say they will resist Trump’s efforts to gut the Clean Power Plan, and the Republican governor of Maryland, pressed by relentless local organizing, has now backed the nation’s first total legislative ban on fracking in a state with gas reserves.4

Even ideological supporters warn that Trump is blowing smoke when he brags that he will “save our wonderful coal miners from continuing to be put out of work,” as the president told a rally in Kentucky in March. Robert Murray, the CEO of Murray Energy, the largest privately held coal-mining company in the country, has disclosed that he told Trump at a White House meeting in February that Trump should “temper his expectations” about restoring coal miners’ jobs. “He can’t bring them back,” Murray said in an interview with The Guardian, because government regulations aren’t what killed them; it was increased automation of coal mining and competition from cheaper natural gas and renewable energy.5

The coal boss’s truth-telling hints at perhaps the most powerful opponents facing Trump: global energy markets and the financial, political, and technological developments that shape them. While Team Trump continues to insist that the world is flat, gravity is not real, and climate change is unproven, major government and corporate players around the world are leaving coal behind, hedging their bets on oil and gas, and racing to embrace clean energy sources—solar, wind, batteries, efficiency—that are plummeting in price, gobbling up market share, and widely regarded as the kingmaking technologies of the 21st-century economy.6

Sweet irony: Perhaps no one is racing faster than China, the economic and climate superpower whose gargantuan coal consumption has long been the favorite bogeyman of US climate deniers, who didn’t want to take action in the first place. Why, they disingenuously asked, should the United States cut emissions when China is building a new coal plant every week? Well, not anymore, China isn’t. Chinese Premier Li Keqiang announced to the annual National People’s Congress on March 5 that China was canceling 50 gigawatts—roughly equivalent to 50 large power plants—of coal-fired electricity production. This followed an additional cancellation, in 2016, of 120 gigawatts’ worth of existing or planned coal plants. These two transformational decisions, taken in the aftermath of the 2015 Paris climate summit that Trump loves to denigrate, mean that fully “one sixth of all China’s coal-fired power capacity…may be either shut down, or in the case of planned capacity, not get built,” according to Zhang Chun, a senior researcher at the independent publication chinadialogue.7

And the money angle? As technological and political forces slash the rationale for coal plants, the economic peril of stranded assets arises. Canceling coal plants means losing some or all of the money invested in them. China’s decision to scale back on coal could strand nearly $1 trillion worth of assets, according to a study by the Smith School for Energy and the Environment at Oxford University. That’s almost 10 percent of China’s gross domestic product. And since most of China’s coal plants belong to state-owned enterprises, these losses would hit government budgets, further straining efforts to maintain popular support.9

China’s potentially stranded coal assets are but a tiny fraction of the “carbon bubble” that imperils the entire global economy as climate change intensifies. Only one-third of the world’s remaining coal, oil, and gas reserves can be burned while still limiting temperature rise to the 2 degrees Celsius that scientists warn is the maximum compatible with the continuation of civilization as we know it, according to studies by the International Energy Agency. The remaining, unburnable two-thirds of coal, oil, and gas reserves are the source of the carbon bubble. At the moment, they count as wealth; the stock value of energy companies is largely based on the size of those reserves. But if they can’t be sold, those reserves face the same financial fate as China’s canceled coal plants: The money invested in them is lost.10

If the global carbon bubble bursts, it could wipe out $100 trillion worth of wealth, according to Citigroup—a staggering figure that would dwarf the housing bubble, whose collapse in 2008 unleashed the worst economic meltdown since the 1930s. Mark Carney, governor of the Bank of England, has been sounding the carbon-bubble alarm for some years, and he is now joined by a who’s who of financial leaders, including private banks Citigroup and HSBC, the World Bank, and the International Monetary Fund. That’s a lot of economic firepower that is at least implicitly in opposition to Trump. The trick facing policy-makers is to deflate the carbon bubble gradually to avoid economic chaos, while simultaneously shifting from dirty to clean energy sources fast enough to avoid climate catastrophe. These twin imperatives leave no room for the Keystone XL pipeline—which would transport some of the most carbon-intensive fuel on earth—or the rest of Trump’s energy agenda, and global financial leaders know it.11

Donald Trump is floundering as president partly because he doesn’t seem to grasp that he is no longer a CEO whose dictates must be implemented without question, but rather an elected official who must obtain some level of agreement from Congress, the courts, and the public at large. Like his Muslim ban and Obamacare overhaul, his climate agenda is susceptible to challenge from these countervailing power centers. The headlines announcing his approval of a permit for Keystone XL gave the impression that the pipeline is a done deal. That is false. There remain, to paraphrase the old spiritual, many bridges to cross. The first: The state of Nebraska hasn’t issued the permit needed for the pipeline to cross its territory, and entrenched grassroots resistance there will be difficult to overcome. Opponents will also sue to force the Trump administration to undertake a new environmental-impact study. All of this should delay construction for “at least two or three years,” predicts Jane Kleeb, a leading pipeline activist in Nebraska, during which time anything can happen.12

The climate fight against Trump is shaping up remarkably like the fight against the Muslim travel ban and the Obamacare repeal: Activists are swarming the public sphere; state and local officials are declaring their own willingness to fight; the news media are covering the action; and the public is getting educated on what is at stake. Trump’s approval ratings are already in the toilet—a mere 36 percent of the American people like the job he’s doing, the lowest figure by far of any modern US president this early in a first term. That gives him precious little leverage to force through an agenda that serves polluters but assaults clean air and the stable climate our children and civilization require. Welcome to democracy, Mr. Trump. Game on.13