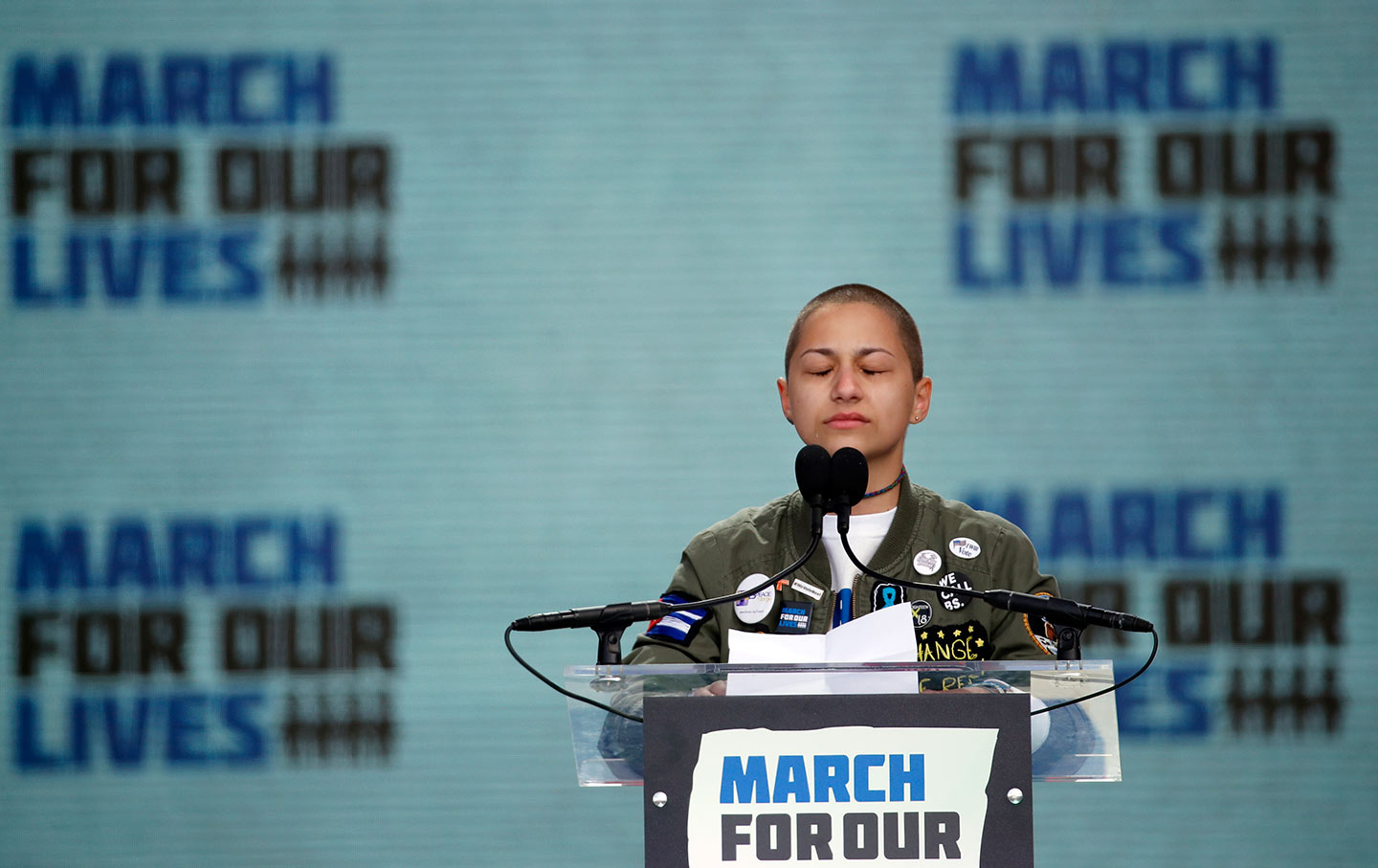 Emma Gonzalez closes her eyes and cries as she stands silently at the podium during the March for Our Lives rally in support of gun control in Washington, DC, on March 24, 2018. (AP Photo / Alex Brandon)

It has been unsettling to hear the language with which the survivors of the shooting at Marjory Stoneman Douglas High School have been attacked. They’ve been accused of being crisis actors, dupes, paid agitators, hooky-playing homosexuals, attention-seeking mental cases, pawns for the FBI, and communist traitors. If it is rare in American history to see upper-middle-class white children so viciously described, it would be wrong to consider it altogether anomalous. Looking at the list of epithets hurled at these young survivors—Emma González and David Hogg in particular—I am reminded of the hateful stereotypes used to demonize the young white Freedom Riders who challenged segregation nearly 60 years ago. And, perhaps predictably, the rhetoric has become even more vitriolic since a number of the students called attention to racial disparities in the media’s coverage (one could easily have assumed from the initial images that Stoneman Douglas was entirely white) and reached out to align their movement with the black youths who have advocated gun control under the broad umbrella of Black Lives Matter.1

One of the most disturbing features of this mockery is its calculated dehumanization. The most searing comments seem far less concerned with the Second Amendment than with personalized humiliation, designed to threaten, break, or even destroy young people who are protesting in the name of peace. This discourse far exceeds mere incivility. We have witnessed the massive circulation of allegations that March for Our Lives activists are profiting from the blood of their fallen classmates, dancing on their graves, and ripping up the Constitution. We have heard guitarist Ted Nugent calling the anti-gun-violence protesters “soulless” and “mushy-brained”; indie-rock performer Jesse Hughes—himself a survivor of the horrific slaughter at the Bataclan music hall in Paris—likened giving up guns to prevent violence to “chop[ping] off my own dick to stop rape.” Leslie Gibson, the now-former Republican candidate for Maine’s House of Representatives, has called González a “skinhead lesbian.” Actor Frank Stallone described Hogg as a “pussy” and a “headline grabbing punk” who “is getting a little big for his britches,” adding, “I’m sure someone from his age group is dying to sucker punch this rich little bitch.” At Arkansas’s Greenbrier High School, three students who walked out of class for 17 minutes were given “two ‘swats’ from a paddle.” (As Wylie Green, one of the students, later observed: “The idea that violence should be used against someone who was protesting violence as a means to discipline them is appalling.”) Most notoriously, Fox News host Laura Ingraham mocked Hogg as a “whiner” when he didn’t get accepted by his top four choices for college.2

The statistics of who is actually dying in our society have been drowned out by all this cruel noise. But the combination of gleeful misogyny, gratuitous threat, and just plain bullying is its own culture of disgrace. Unfortunately, dehumanizing our youngest citizens isn’t a new feature in our most vexed political encounters: I am thinking of Ruby Bridges, who in 1960, at the age of 6, integrated the William Frantz Elementary School in New Orleans; she made her way each morning through hordes of angry white parents—mostly women—who spat at her, threw eggs at her, and threatened to poison her. I am also thinking of Linda Brown, who died on March 25 of this year; as a child, she was the brave (and victorious) plaintiff, along with her sister Cheryl, in the 1954 Supreme Court case Brown v. Board of Education.3

I am also remembering a significant precursor to the March for Our Lives: the Children’s March of 1963. Fifty-five years ago this May, thousands of schoolchildren marched through the streets of Birmingham, Alabama, to protest racial inequality. Freeman Hrabowski, now president of the University of Maryland, Baltimore County, was 12 at the time, and recalls encountering the infamous public-safety commissioner, Bull Connor: “My knees were shaking. He looked at me and said, ‘Little nigra, what do you want?’ I said, ‘We want to kneel and pray.’” Hrabowski and hundreds of others were thrown in jail before the day was out, and Connor went on to use attack dogs and fire hoses to disperse the crowds. (The water pressure was so great that it not only tore clothing and flesh, but dislodged bricks from nearby buildings.) The brutality captured in news footage from that day endures as the symbol of repressive racial separatism in a city whose nickname—“Bombingham”—stemmed from the frequency with which black homes and churches were bombed by white vigilantes.4 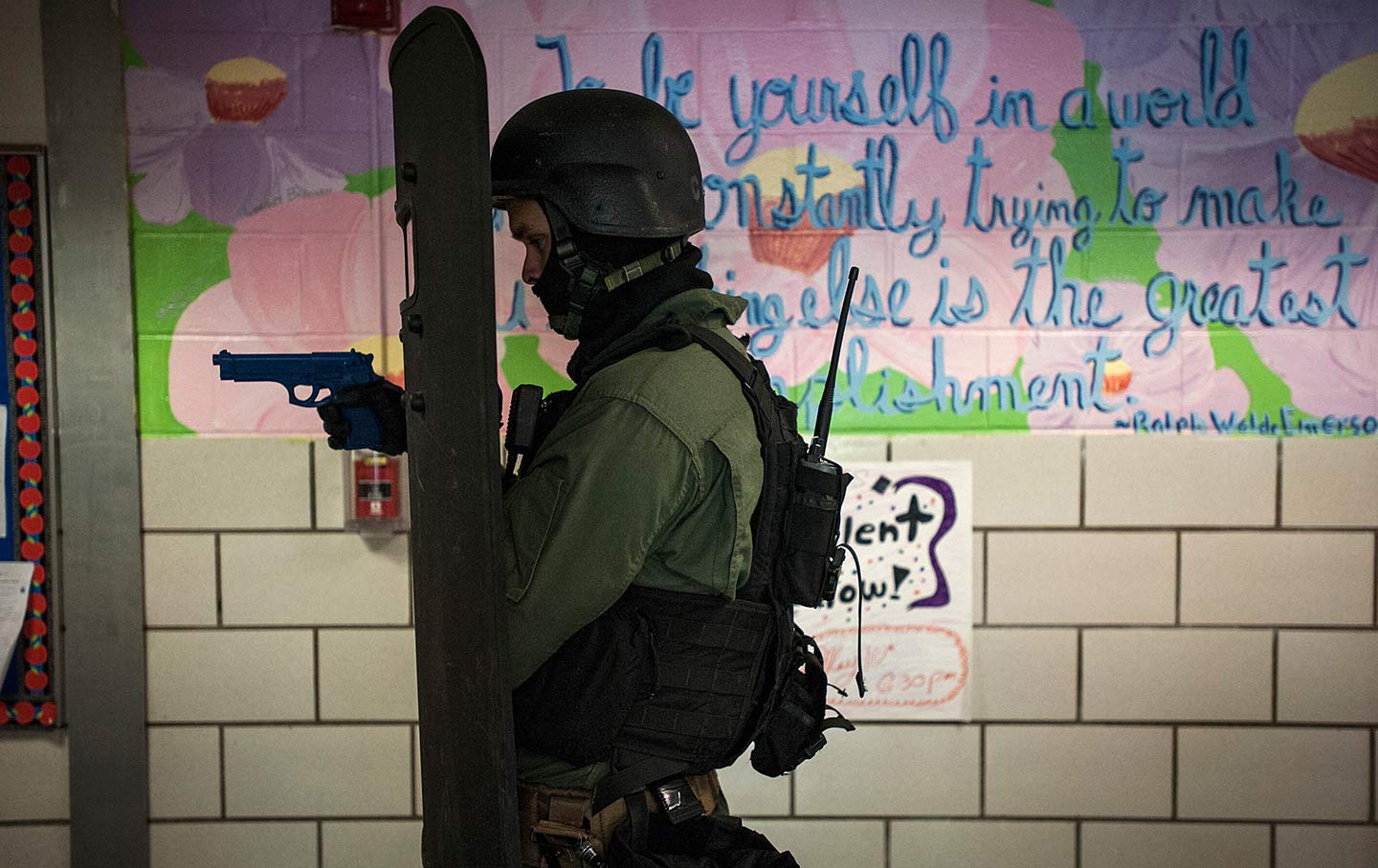 Teachers Are Being Trained to Shoot Their Students

Journalist Charlayne Hunter-Gault, who spent her own youth on the front lines of the civil-rights movement, has written poignantly of the four young girls who died in the 1963 bombing of the 16th Street Baptist Church in Birmingham and of the “wounds that are less visible and harder to reconcile.” She writes that bombing survivor Sarah Collins Rudolph, whose sister Addie Mae was killed, and who lost one of her eyes in the blast, “is seeking financial compensation for the extensive medical expenses she incurred after the attack. After suffering the consequences for the past five decades, she said, even after all these years, nobody remembers her.”5

González, Hogg, Naomi Wadler, and the other speakers at the March for Our Lives are the most memorable of the young people affected by our scourge of gun death. But more than 187,000 students have been exposed to school shootings since Columbine in April 1999. Many remain in various degrees of physical or mental pain; they are a population whose remaining years will be etched with the stresses of catastrophe. And while many of the young leaders of this new movement are smart, strong, and media-savvy, we should never forget the toll taken on their lives—not only with regard to the unspeakable trauma they’ve already endured, but in the reiteratively staged depravity that sics hungry dogs upon those who kneel to pray, codes cruelty as freedom, and takes decency for weakness.6