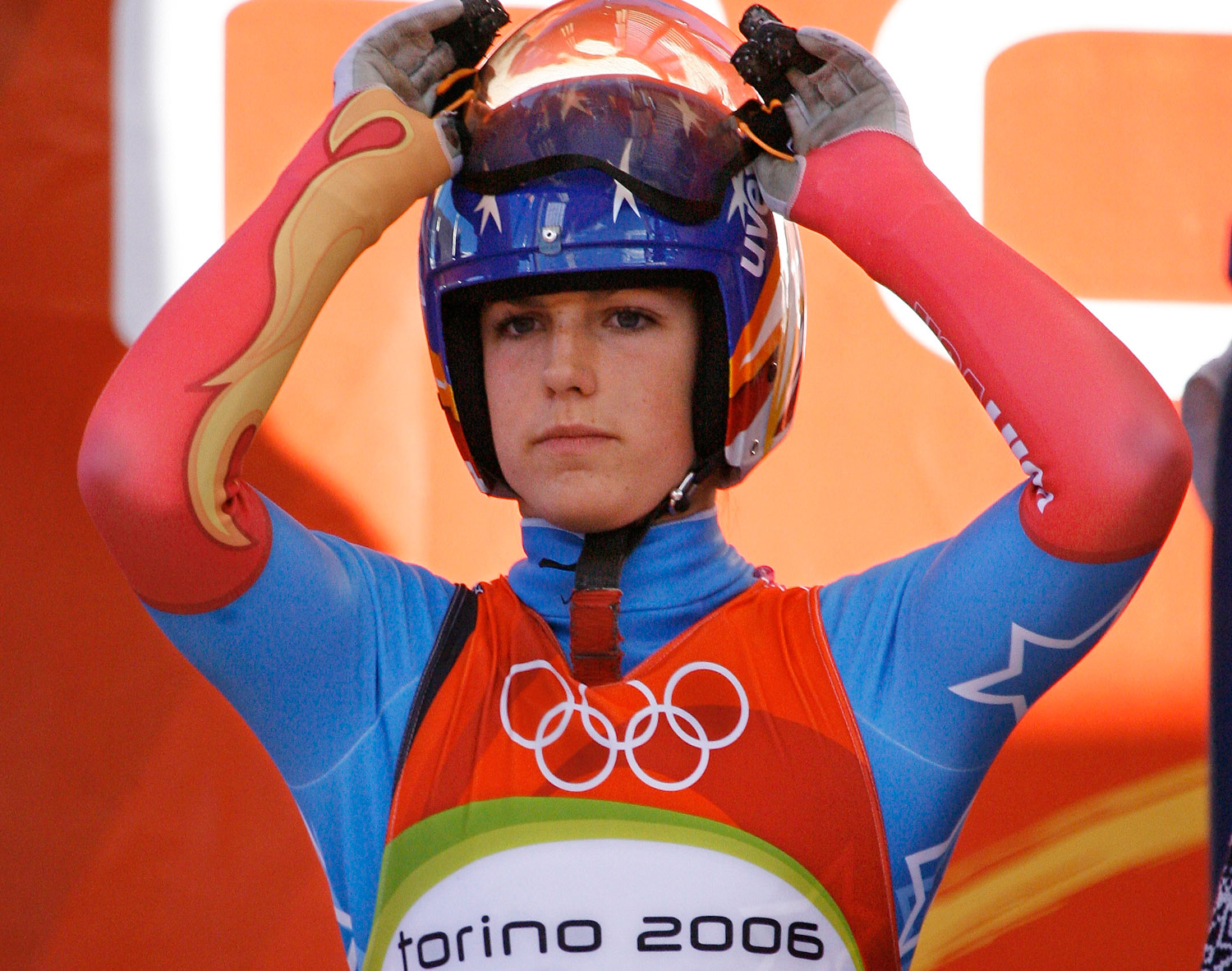 As a former Olympic athlete, I can tell you from experience that the Olympic Games have much more in common with The Hunger Games than anyone would want to admit.

I connect with the inhumanity of The Hunger Games because I’ve been there, as a luge competitor at the 2006 Winter Olympics in Turin, Italy. No, I didn’t get sucked into the depths of an artificial lake, like the character played by Jennifer Lawrence. But I did get sucked into the rafters of an artificially manufactured tube of glare ice, only to come crashing down in the second run of my Olympic moment.

The grandeur of the opening ceremonies of The Hunger Games is designed to mask the cruelty of the competition itself. The Olympic opening ceremonies serve a similar purpose. Like the kids representing the districts of Panem, each nation’s athletes are trotted around a massive arena like prize ponies, shrouded in the patriotic glory of their particular flag. The carefully orchestrated pageantry is misleading, telling us that the Olympics are a celebration of the human capacity to achieve, to overcome obstacles, and that the world’s best athletes represent something bigger than themselves.

But make no mistake: for the global elite, the Olympics are an investment—and one with a rapidly growing price tag. At the London Games, the cost of the opening ceremonies alone was a whopping $42.3 million. This year, Russia will shell out more than $51 billion for the two-week event, making these Games more expensive than all previous Winter Olympics combined.

In The Hunger Games, Jennifer Lawrence is the sacrificial lamb of District 12. As one of the prize ponies of the US team, I served a similar purpose for the Turin Games. Groomed from the tender age of 11, I spent my childhood pursuing Olympic glory, which epitomizes the American dream of merit-based success.

Looking back now, I finally understand an experience I couldn’t quite grasp as a child. I see that the beautiful illusion I once searched for is a fabrication, the creation of ingenious marketing mechanisms by those who run the Olympic show. I once hoped that the patriotic glory I was told so much about would give meaning to the physical and emotional pain of my athletic struggle. I grew accustomed to gritting my teeth under the strain of various forms of pain: the daily grind of hours of elite-level training, and the toll it exacted on my developing body; the pain I felt upon slamming into a wall of ice at 80 miles per hour; the biting winter cold that whipped across my thinly protected, spandex-clad form while sitting atop a frozen winter landscape. Then there was the emotional pain and fear, which took on various forms: the constant fear of bodily harm that scarred my mind, just as my body was scarred by more than a hundred stitches; the fear that I would disappoint those I loved and those who had invested time and money in my athletic career. There was the pain of failure, of hope swallowed by frequent defeat. Then there was the gendered pain: that of an adolescent female standing in underwear in the glass cube of sport science, each area of fat accumulation clinically pinched by a man with metal tongs. I once hoped that by withstanding all this pain, there would one day be a payoff, even if only an emotional one.

Now I understand my failure to connect to the pomp of the opening ceremonies, the confused emptiness that consumed me as I stood in the cold of a Turin winter, wrapped in the American flag, wincing under the cruel glare of a thousand flashbulbs. The real function of the Olympic athlete in the world of corporatized sports is clear to me now.

Amateur status is mandatory for any Olympic hopeful, but athletic training at the elite level is a full-time job. Most nations get around the problem by giving their Olympic athletes significant government support, but our best athletes are almost entirely dependent on corporate sponsorship. For the athletes, the consequences of this addiction can be disastrous.

The socialization of my allegiance to Verizon began the moment I was selected—as an 11-year-old—for the US development team. The culture within the US Luge Association viewed brand loyalty as integral to the survival of the organization. All of my clothing was plastered with the Verizon logo. I was not allowed near any camera without giving a visual and verbal statement of thanks to Verizon for making all of my dreams come true. I went through intensive media training each year to reinforce this allegiance—to learn how to be a better spokesperson for Verizon. During my Olympic year, I signed away my rights to use media time for just about anything other than gratitude to sponsors. It was a condition for entrance into the Olympic Village.

In the wake of the 2008 recession, Verizon found itself on rocky terrain, so it began breaking many of its sponsorship contracts with amateur sports organizations. One of those was with the US Luge Association, to which it gave millions of dollars a year. USA Luge, which spent decades cultivating this relationship at the expense of all other sources of funding, has been unable to replace Verizon. Today’s luge athletes have had to look elsewhere for support, with many having little choice but to join the US Army World Class Athlete Program (not surprising, given the similarity in value systems: both the armed forces and elite-level sports cultivate extreme discipline, patriotism and victory at all costs). Apparently, one must be willing to enlist—and possibly fight and die for one’s country—in order to cover the expenses of international competition. Many of those who haven’t gone this route hold down outside jobs in addition to full-time training schedules.

There’s a lot of money to be made in Olympic sports, a huge global media event that rolls around every two years. Corporate-sponsor bottom lines are merely one indicator of the vast sums involved. To see just who is generating this wealth, one has to look no further than the act of sponsorship itself, with individual athletes and entire teams purchased and traded among the corporate elite like valuable additions to bursting stock portfolios. As an athlete in a sport as insignificant in the United States as luge, I could never hope to see my face plastered on a Wheaties box. However, I wasn’t too obscure to escape the eye of the masterminds of gender commodification at Maxim. Apparently, spandex uniforms make the women of USA Luge hot commodities. Lucky me.

For sponsors, the way to cash in is clear. Athletes are put up for sale in a variety of ways. Olympic event coverage, elaborate marketing devices and product placement, branding rights, and exclusive access to the use of athlete images and identities are used not only in the sale of media products, but in the gamut of other commodities attached to the Olympic brand during the course of an Olympic year. The Olympic rings themselves have been copyrighted by the IOC, reserved exclusively for use by corporate sponsors.

As those who generate super-profits for sponsors, today’s Olympic athletes are workers. Like any other workers, athletes are limited by their economic vulnerability—in this case, control by the sporting hierarchy. Iron-clad corporate control enforces social discipline over the athletes themselves, but also over the economy of the Olympics as a whole. The IOC, the USOC and each sport’s national governing body are mere intermediaries between athletes and corporate sponsors, solidifying the relationship of exploitation.

Corporate domination of the Olympic economy is supreme. Yet as any good capitalist knows, the best way to ensure the continuation of top-down control is successful psychological manipulation. All too often, athletes’ perspectives on the nature of their social position are shaped by the same PR campaigns that further the exploitation of their labor. To sponsors, athlete value is about how much money can be made off an individual not just in the act of competition but, more importantly, in victory. It’s no surprise that the indicators of athlete success are also those that drive market success, and that both are products of the same ideology: competition, individualism, domination. When these values are combined with the athletes’ tenuous economic identity as an exploited labor pool, the competition for resources cements a divide-and-conquer relationship that undermines their ability to think and act in terms of solidarity with their fellow athlete-workers. Throw in a teaspoon of patriotism and a dash of nationalism, and the recipe for divide and conquer is complete. The result is a subservient class that plays by the rules of the corporate sponsors and the sporting managerial class—the IOC, USOC and other national governing bodies.

The economics of the Olympic movement mirror the global picture. Privatization, deregulation and austerity politics have overtaken the world of sports, just as they have all other aspects of the global economy. But every cloud has a silver lining, right? Privatization may appear to lead us toward a dystopian future, but the potential remains for a uniquely explosive, and possibly transformative, resistance. Corporate supremacy in the Olympic movement has brought under its control the world’s best athletes. In previous epochs of working-class growth, class consciousness has inevitably blossomed. As the austerity agenda advances, governments will likely continue slashing their budgetary allocations for “unnecessary spending.” Clearly, the well-being of the sporting world’s prize ponies is on the chopping block. The likelihood is that the privatization of sports will continue on a global scale. Will the creation of an internationalized resistance follow? That’s up to the athletes—and those in solidarity with them.