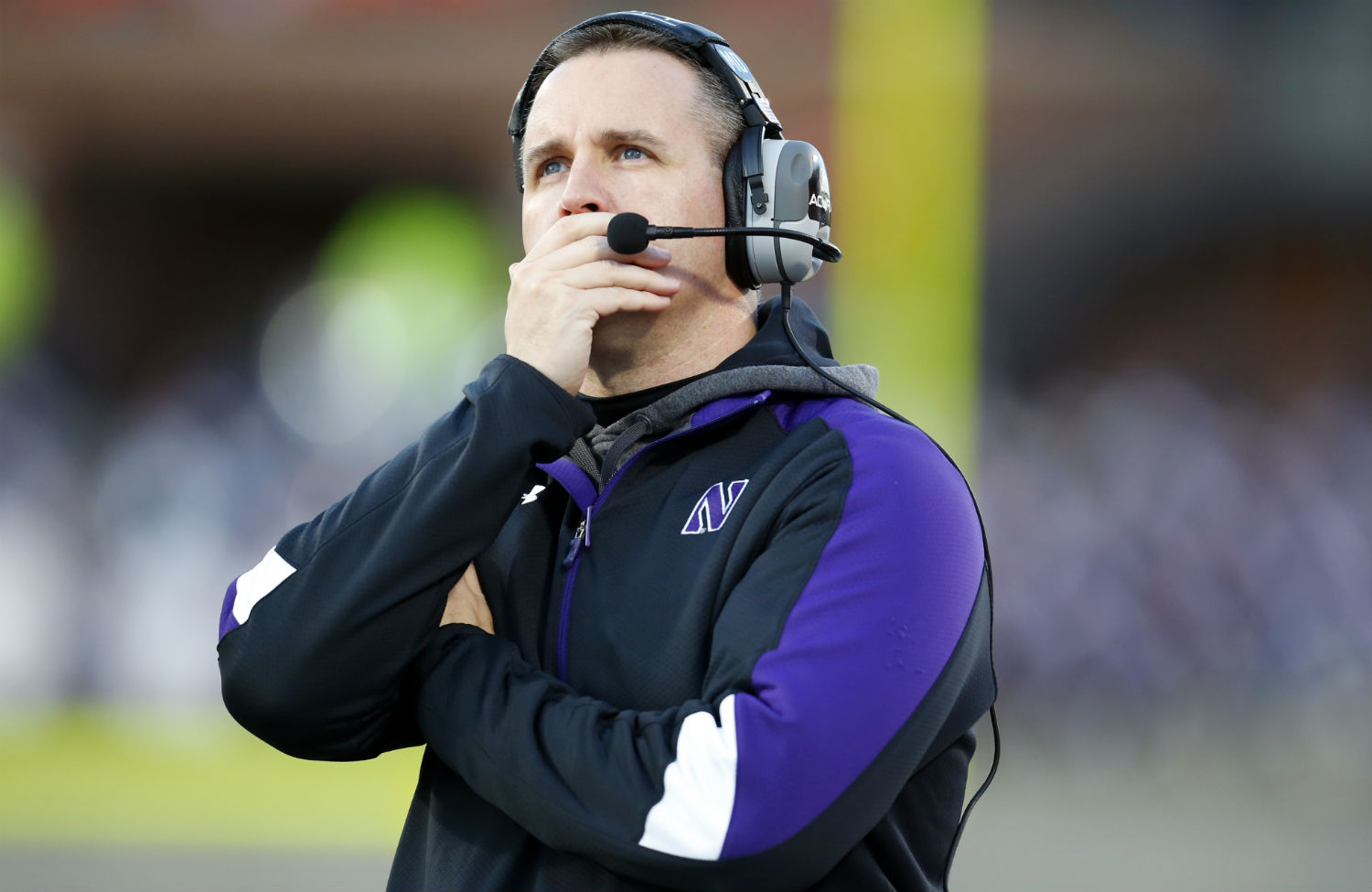 The first thing you have to understand are the power dynamics that exist inside of a college football locker room. The football coach is Zeus, God of Thunder. He—and it is always he—does not just determine your playing time, your media exposure and your overall status in the group. He also determines whether or not your scholarship will last past the year. You go to school at his pleasure. In the best-case scenarios you are gifted a benevolent despot. In the worst, he never lets you forget the power he holds over your head.

Enter Pat Fitzgerald, the esteemed coach of the Northwestern football team. The former star Wildcats player has led his team to a 55-46 record during his time in charge. Fitzgerald has played the role of school ambassador, rainmaker and recruiter. His team wins and his players graduate. Now, however, he is playing another role, that of union buster. Northwestern Wildcat football players are due to vote on April 25 about whether to formally unionize, following the earthshaking National Labor Relations Board ruling that stated they were in fact not student-athletes but employees at the school, and Fitzgerald is on a full-court press to prevent that from happening. Although it is against the law for him and his staff to openly threaten players who want to vote union, Fitzgerald is lobbying hard to make sure that a no-vote takes place in two weeks.

As he said publicly, “I believe it’s in their best interests to vote no. With the research that I’ve done, I’m going to stick to the facts and I’m going to do everything in my power to educate our guys. Our university is going to do that. We’ll give them all the resources they need to get the facts.” [my emphasis]

It is unclear what “facts” Fitzgerald is trafficking in, but one wonders if included in his antiunion truth kit is the fact that Fitzgerald is the school’s highest-paid employee, with a salary of $2.2 million per year. He is the first sports coach to ever be the highest-paid employee in school history. Another fact is that Fitzgerald received a $2.5 million loan from the school upon signing his last contract. The players, meanwhile, are asking for a seat at the table and an extension of health and educational guarantees. Even if they vote yes, there will be years of appeals. In fact, Northwestern filed suit on Friday, to appeal the original NLRB ruling. Yet despite all of this, it is too much for the ball coach to abide.

Why is Fitzgerald, a former player, pushing back so hard against the efforts to unionize? Is it pressure from the NCAA, which sees unionization as a threat, in its own words, to “blow up” its entire operation? Is it those in power on a Northwestern University campus that has been hostile to any kind of on-campus organizing? Is it pressure from well-heeled alumni who are being very public about why the players need to vote no? Does Fitzgerald simply not want to break the time-honored power dynamic in a college locker room of Coach as God? Maybe it is as simple as the words of ESPN legal analyst Lester Munson who said, “Wildcats coach Pat Fitzgerald is now in the position of being an employer whose employees are entitled to vote on whether to unionize.” Like so many bosses, maybe he does not want his workers to have a seat at the table. Clearing the table, maybe, but not a seat.

Whatever the backroom reasons, they are collectively less important than his influence. Since Fitzgerald has started to flex his muscle, a team that almost unanimously signed cards to apply for union membership now has numerous players speaking out publicly against the April 25 vote. Despite this, former Northwestern quarterback Kain Colter, who was leading this struggle before his graduation, is confident that April 25 will go their way. I was at an event with Kain Colter at the Aspen Institute in Washington, DC, last week. He acknowledged that the players are under pressure to vote no, but still felt a strong degree of confidence that the vote would go their way. Colter said, “I think it’s tough when you have some criticism that they’ve got. Some people came down [on the players], hollered, and even people within the Northwestern alumni base. That’s obviously tough, but I think they are strong and they still believe in the issue.” Colter believes, with unblinking self-assurance that the basic message they carried will win out over any efforts at intimidation. “I’m very confident,” he said. “All it boils down to is do you want to vote for having rights or not.”

Whether or not the Northwestern football team votes “yes,” this issue is not going anywhere. The NLRB has still cleared the way to organize at other private universities. As Ned Resnikoff reported, state legislatures are at work trying to either make this ruling apply to public universities (Connecticut) or block its extension (Ohio). The issue is not going anywhere because the system itself is manifestly unjust, and Northwestern’s efforts to strangle this movement in the crib will fail. Pat Fitzgerald is a fine coach. He should stick to coaching and get out of the union-busting business.