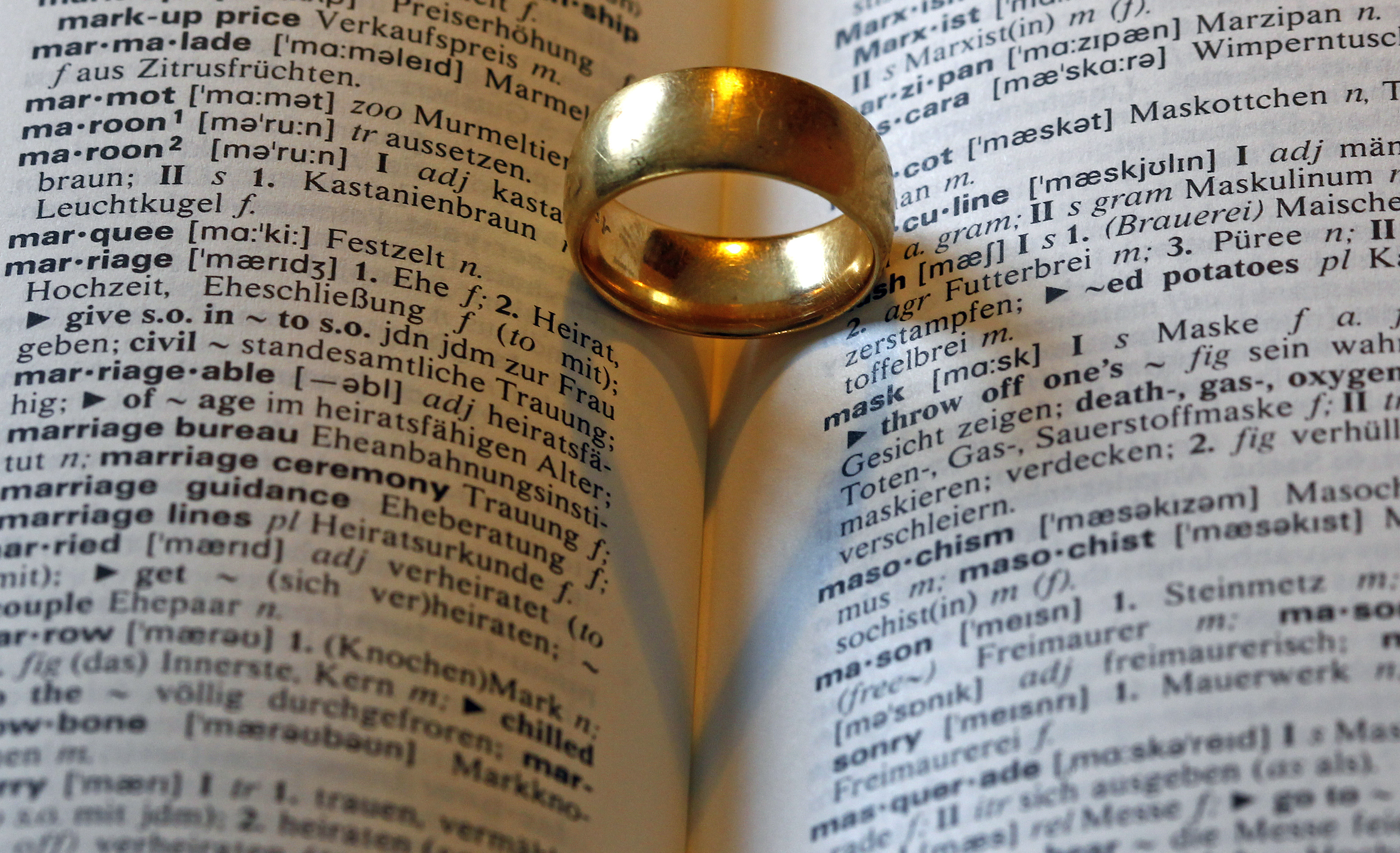 We’re lucky that “A Woman’s Nation Pushes Back From the Brink,” the rich and fascinating new report by Maria Shriver and the Center for American Progress, is appearing just as conservatives are once again pushing marriage as a panacea for poverty.

In recent days, several Republicans have rediscovered George W. Bush–style compassionate conservatism, acknowledging poverty as a problem while promoting traditional values as the solution. “The truth is, the greatest tool to lift children and families from poverty is one that decreases the probability of child poverty by 82 percent,” Senator Marco Rubio said in a much-hyped speech last week. “But it isn’t a government spending program. It’s called marriage.” On Sunday, former Bush press secretary Ari Fleischer made a similar case in a Wall Street Journal piece titled, “How to Fight Income Inequality: Get Married.” Cleverly hijacking gay rights language to talk about poor people’s failure to wed, he wrote, “Marriage inequality is a substantial reason why income inequality exists.”

On one hand, given recent right-wing attacks on the poor as overindulged layabouts, there’s progress in the fact that some conservatives are now talking about poverty as a crisis. That does not mean, however, that marriage promotion is a serious solution, for reasons that the new “Women’s Nation” report makes clear.

Shriver and CAP deserve enormous credit for putting “A Woman’s Nation Pushes Back From the Brink” together. In the last couple of years, we’ve seen unprecedented attention to issues around women, work and power. Ann Marie Slaughter’s 2012 Atlantic article “Why Women Still Can’t Have It All” set a readership record for the magazine. Sheryl Sandberg’s “Lean In” was a number-one bestseller. Everyone from my old boss Tina Brown to Politico to Gucci is promoting women’s empowerment. But these efforts have often sidelined the needs of the majority of American working women, focusing either on elites shattering glass ceilings or on heroic women in the developing world. The new “Women’s Nation” report, studded with essays by superstars like Beyoncé and LeBron James as well as Slaughter, Sandberg, Barbara Ehrenreich and Stephanie Coontz, represents an effort to channel this momentum toward American women living in poverty or clinging to the lowest rungs of the middle class.

The mainstream conversation about women’s leadership, “while important, really ignores the challenges that the vast majority of women are facing,” Neera Tanden, president of the Center for American Progress, told me.

Fifty-two percent of minimum wage earners are women, and the vast majority of them are parents. Seventy percent of workers don’t have sick days. These are much larger scale challenges that a conversation that’s only about women’s leadership ignores.

There’s much to say about “A Woman’s Nation Pushes Back From the Brink.” It contains an ambitious policy agenda; Shriver met with President Obama to discuss it on Tuesday. But given current conservative proposals, it’s worth pointing out that the numbers and analysis in the report demolish the Republican case for marriage promotion as an answer to poverty.

That doesn’t mean that marriage doesn’t matter. “The social science literature is quite clear that children of single-parent families, particularly those living in low-income households, do not fare as well as their peers living in two-parent families, and that these poorer outcomes persist, even when you control for socioeconomic differences,” writes CAP senior fellow Ann O’Leary in the report.

But it doesn’t follow from this that conservative programs to promote marriage are useful. For one thing, they don’t work. As O’Leary points out, George W. Bush’s Healthy Marriage Initiative spent $150 million promoting marriage as a poverty alleviation tool. It was meant to both encourage people to wed and to strengthen existing unions. “But rigorous evaluations of the funded programs have found them to unsuccessful in meeting either of these goals,” she writes. This should not surprise conservatives, since they’ve spent decades arguing that society cannot be engineered to fit the preferences of policymakers.

If policy has a limited role in creating new sexual and romantic norms, though, it can respond to them. Other countries, after all, have found ways to ameliorate the stresses single-parent families are subject to. In the United States, as O’Leary points out, children from single-parent homes score twenty-three points lower on reading tests than children from two-parent families. In other developed countries, the average differential is five points.

The difference, of course, lies in the existence of robust welfare states. Conservatives often fret that the breakdown in marriage necessitates a greater role for the state in family life. They are correct to do so; a nation full of single-parent families can’t thrive without a well-funded public sphere. The question, then, is whether our priority should lie in expanding government to meet the needs of our people, or in punishing people for the choices and circumstances that create those needs.

In a detailed poll included in the report, far more Americans support the former approach than the latter. Sixty-four percent of Americans favor a government policy of “helping society adapt to the reality of single-parent families,” while only 51 percent favor a goal of “reducing the number of children born to single parents and encouraging two-parent households.”

Yet even if you abhor adaption to our new norms around marriage and family and are solely interested in seeing more people get hitched, the Republican approach is still backwards. The problem is that conservatives misunderstand why struggling women aren’t marrying at the same rate as their richer sisters. The right fails to see that what’s changed isn’t just the moral status of marriage, but the institution’s economic underpinnings, particularly the collapse of decent jobs for working-class men.

“Trying to shoehorn women whose expectations of equal treatment have been rising into marriages with men whose economic prospects have been falling is no solution to contemporary work and family dilemmas,” writes Coontz. “Women are far less likely than in the past to put up with the kind of behavior that so often accompanies economic loss and chronic employment stress—such as drug or alcohol abuse and domestic violence—and we should not encourage or incentivize them to do so.” Women know that no marriage is better than a bad marriage. According to the report’s poll, only 19 percent of divorced low-income women wish they’d stayed married, compared to 53 percent of divorced low-income men.

This doesn’t mean we should write off men who make poor marriage prospects. Perhaps the most fascinating section of the report is about inner-city fathers who have children by multiple women—a largely reviled group. It’s written by Kathryn Edin, a public policy professor at Harvard and the co-author of the celebrated book Promises I Can Keep: Why Poor Women Put Motherhood Before Marriage. For a long time, Edin writes, she assumed that the men in her subjects’ lives were simply uncaring and irresponsible. Then she started interviewing them.

She found that poor fathers, like poor mothers, see their children as a source of meaning and hope in a world otherwise devoid of both. The problem is that it’s hard for them to stay involved with their children when they have little to offer financially. “Love and affection are all fine and good, but who’s going to pay the light bill? What about keeping the heat on?” writes Edin. “If a child’s father can’t provide money, the attitude goes that he’s more trouble than he’s worth.”

And so while she urges young men to wait until they have a strong relationship and solid finances before they have children, she also has a message for the rest of America:“You’ve got to give these men hope, which would mean a real shot at a stable future. Stop locking them up for nonviolent offenses…. Increase the supply of decent jobs and, for those who can’t find work, provide jobs of last resort.” Besides being the right thing to do, it’s the only marriage program that has a chance of working.