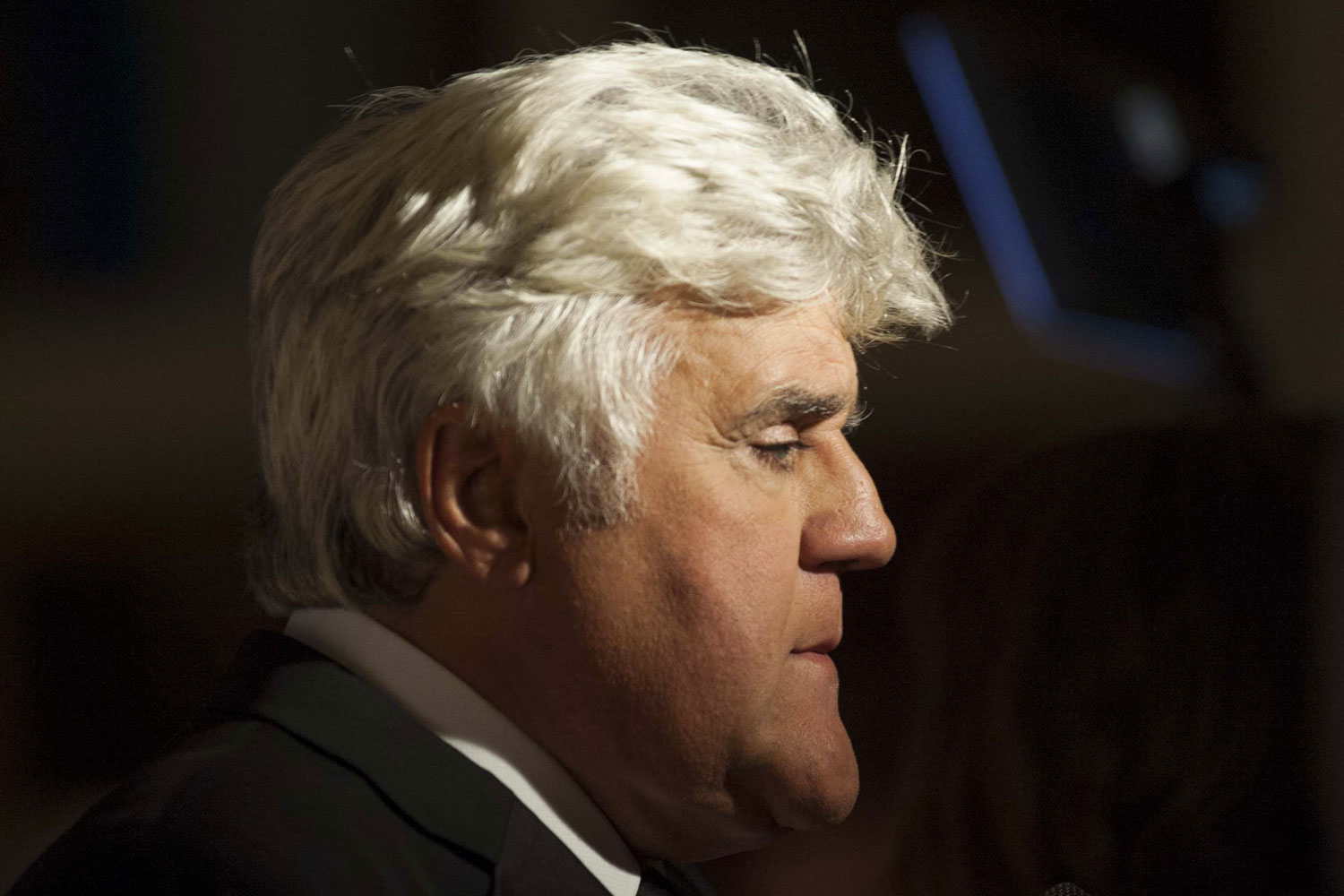 UPDATE: Jay Leno has announced that he has cancelled his scheduled speech to the National Shooting Sports Foundation’s 2015 SHOT Show in Las Vegas. Leno told Po Murray of the Newtown Action Alliance (who is quoted in the article below) that he was unaware that the NSSF was a pro-gun lobbying group.

America’s epidemic of gun violence is no laughing matter, but comedian Jay Leno—former host of the “Tonight Show”—has nevertheless agreed to perform at the 2015 Shooting, Hunting, Outdoor Trade (SHOT) Show on behalf of the National Shooting Sports Foundation (NSSF), the trade association for the gun industry. Leno is scheduled to speak at the NSSF’s “State of the Industry” dinner on January 20, 2015 at the Venetian Hotel in Las Vegas, Nevada. The group’s website claims that tickets for the event are “going fast.”

Ironically, the NSSF is headquartered in Newtown, Connecticut, only three miles from Sandy Hook Elementary School, where six adults and 20 first-grade children were killed in a mass shooting in December 2012.

Leno, who hosted the late-night program for 22 seasons, has never previously voiced public support for the NSSF or the gun lobby. In fact, during a November 2013 “Tonight Show” interview with conservative Senator Ted Cruz, Leno questioned the Texas politician about his opposition to stricter gun-control policies. “Why is increased background checks not a good thing?” Leno asked. “No one is saying you can’t have guns; you just have to pass a background check. Why is that bad?” He told Cruz that without stronger laws, “a complete psychopath can go to a gun show and buy half a dozen guns.”

The Newtown Action Alliance, the Coalition to Stop Gun Violence, and the Campaign to Unload are circulating an online petition asking Leno to cancel his SHOT Show appearance.

“Mr. Leno should not be acting as a pitchman for an industry that has disrespected gun violence survivors and stonewalled attempts to prevent future shooting tragedies,” said Josh Horwitz, executive director of the Coalition to Stop Gun Violence. “We’re asking him to reconsider his promotion of the remorseless gun lobby.”

Po Murray, chair of the Newtown Action Alliance, which was formed after the Sandy Hook shooting, said she was “shocked” to learn that Leno was speaking at the SHOT Show. “I figured he didn’t know what they stand for,” said Murray, who lives in the same Newtown neighborhood where Adam Lanza, the Sandy Hook shooter, once lived; her four children previously attended the school. “We hope our petition will convince Mr. Leno to be reasonable and cancel his speech.”

Murray said her group is going to invite Leno to come to the national vigil for victims of gun violence at the Washington National Cathedral on December 11.

“He’ll get a chance to meet victims of gun violence and their families from all over the country,” Murray said. “Maybe that will help him understand why we’re so upset by his decision to speak at the SHOT Show.”

The NSSF has opposed all attempts to strengthen U.S. gun laws to prevent future tragedies. NSSF president Steve Sanetti even accused Newtown survivors who have advocated for tougher gun laws of reacting irrationally because they are “angry” and “fearful.” The association has accused gun violence prevention advocates of “seeking to destroy the Second Amendment” and lobbied against even the most modest proposals, such as universal background checks for all gun sales, a reform which is supported by 92 percent of gun owners nationally.

Formed in 1961, NSSF’s members include gun manufacturers, distributors, and retailers; gun magazine publishers; shooting ranges; and gun owners’ clubs. The NSSF lobbies against limits on high-capacity magazines and supports legislation allowing gun owners to carry concealed weapons. It has sought to prohibit the Environmental Protection Agency from regulating chemicals in ammunition. NSSF has been the leader in working to rebrand assault rifles in general, and the AR-15 assault rifle (like the one used in the Newtown tragedy) in particular, as “modern sporting rifles,” according to the Violence Policy Center. NSSF has three blogs, named “Pull the Trigger,” “First Shot News,” and “Bullet Points.”

According to a 2012 report by the Sunlight Foundation, NSSF has given more than $700,000 in campaign contributions. According to the Center for Responsive Politics, NSSF spent $2.39 million in lobbying in 2014 so far. The group works closely with the National Rifle Association (NRA). Like the NRA, NSSF’s board includes many representatives of the gun industry. Steve Sanetti, NSSF’s president since 2008, is former president of Sturm, Ruger & Co, one of the nation’s largest gun manufacturers. The chairman of NSSF’s board is Robert L. Scott, the vice chairman of Smith & Wesson, another major gun maker.

Gun violence prevention advocates have long viewed the NSSF, along with the NRA, as major obstacles to gun reform. Last April, about 100 victims and survivors of gun violence and other advocates protested the corporate gun lobby’s obstruction of sensible gun laws, such as expanded background checks, outside NSSF’s annual Congressional Fly-In fundraising dinner in Washington, D.C.

In the past, Leno has refused to speak to groups whose values and practices he disagrees with. In 2000, Leno was scheduled to appear at the Society of Human Resource Management’s (SHRM) annual convention in Las Vegas when he learned that one of the most notorious union-busting law firms in the country—Jackson, Lewis—was getting paid to make two “How to Stay Union Free” presentations at the conference. Leno courageously announced that he’d refuse to appear at the SHRM event unless it booted Jackson, Lewis off its agenda. Rather than lose Leno, SHRM cancelled the conference’s union-busting seminar. This was quite a coup, considering that SHRM’s chairman, Michael J. Lotito, was a partner at Jackson, Lewis. At the time, Leno’s union, the American Federation of Television and Radio Artists (AFTRA) noted that Leno had always been a “stand-up guy” on union issues.

The Newtown Action Alliance, the Coalition to Stop Gun Violence, and the Campaign to Unload are hoping that Leno will also be a “stand-up guy” on gun-violence issues and cancel his appearance at the SHOT Show.