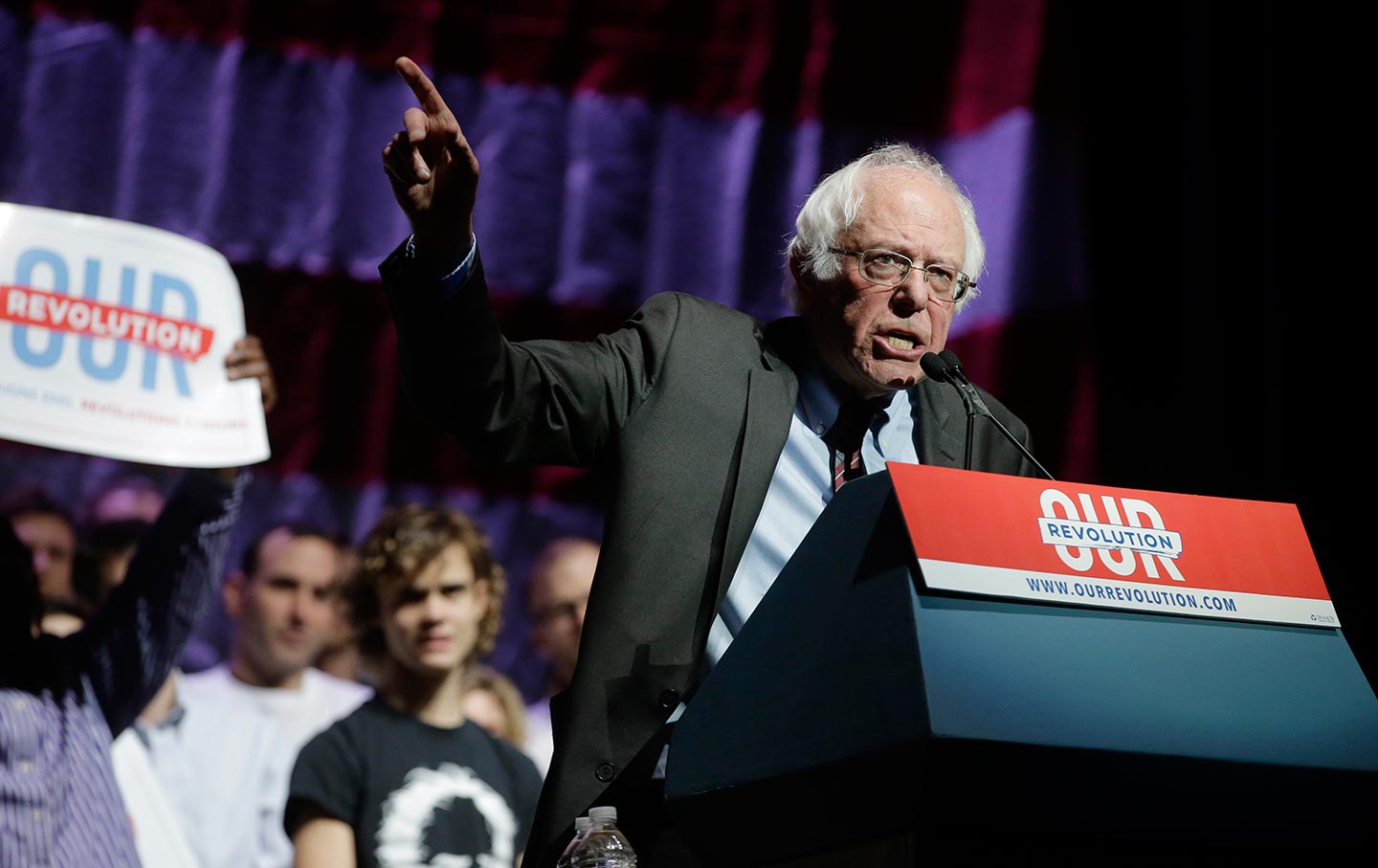 Bernie Sanders addresses an audience during a rally in Boston in 2017. (AP Photo / Steven Senne)

For progressives, especially those who see the Democratic Party as the only plausible vehicle for achieving political power, the combination of the Bernie Sanders presidential campaign and Hillary Clinton’s shocking defeat in November heralded a power shift within that party. Sanders, an out-of-left-field rebel, energized the left, Democratic activists, independents, and many others—millennials, young single women—disenchanted with the business-as-usual Democratic Party, and he showed that it was possible to challenge the party’s establishment and raise hundreds of millions of dollars in small donations on the Internet. Meanwhile, Clinton’s ignominious defeat seemed to put an exclamation point on the failure of that establishment.

But, as recent elections in New Jersey and Virginia—along with the hard-fought race for chair of the Democratic National Committee—show, that establishment isn’t going down without a fight. Even Hillary Clinton, after a brief pause to wander in the woods, is back. And while the special election in Georgia today could elevate a Democrat, Jon Ossoff, to the House, Ossoff is solidly a member of the Democratic establishment.

Despite an array of new resistance groups, the “Sanders-Warren wing” of the Democratic Party has yet to win much.

So, despite the emergence of a multi-hued, self-starting array of resistance groups that has emerged since the election of Donald J. Trump, the “Sanders-Warren wing” of the Democratic Party has yet to win much. In Montana, a Sanders-backed insurgent Democrat, Rob Quist, lost his bid for a House seat on May 25, while getting virtually no support from the Washington-based Democratic Party.

In the DNC race, the Clinton-Obama establishment closed ranks to guarantee that the Sanders-allied Representative Keith Ellison was shut out, getting the consolation prize of being named to the powerless post of “deputy” DNC chair.

And in the two most important contests this year, the twin races for governor in New Jersey and Virginia, progressives mounted strong challenges to the party’s anointed ones—and lost. Each of these races had earlier been touted as a possible turning point in the establishment’s ability to control the party after the 2016 debacle, and in each case that turning point, well, turned the other way. These uncomfortable results have crucial implications for the left-liberal challenge to the center-right in the party.

In New Jersey, Phil Murphy won the Democratic nomination on June 6 with 48 percent of nearly half a million votes cast, beating an array of four more progressive candidates, including Jim Johnson and John Wisniewski, who garnered about 22 percent each. Both Wisniewski, a longtime assemblyman who’d chaired Sanders’s campaign in New Jersey and who’d been endorsed by Jeff Weaver of Our Revolution, the organizing spinoff from Bernie’s presidential campaign, and Johnson, an African-American lawyer who’d served as a US Treasury under secretary and who’d chaired the Brennan Center for Justice, drew enthusiastic support from many progressives. But both knew it was a steep uphill climb.

Can a Sanders Democrat Win the New Jersey Governor’s Race?

Murphy, who spent 23 years as a banker at Goldman Sachs, is a multimillionaire, and he spent lavishly over the two years before the race to scare off other establishment challengers and secure the support of the New Jersey Democratic organization. Every single prominent state politician, including both US senators and all 21 county chairs, dutifully lined up behind Murphy. The support of the county chairs gave Murphy the “regular Democratic organization” line on every ballot, considered to be worth as much as 20 percent of the vote right off the bat. And Murphy’s own cash overwhelmed the resources of his opponents, a task made easier by the fact that the two leading progressives split the anti-Murphy vote.

In Virginia, Ralph Northam, the designated heir of current Governor Terry McAuliffe—the crony of the Clintons who got his start as “the Macker,” a fast-talking fundraiser among millionaires and billionaires in the late 1980s—handily beat (56 to 44 percent) an upstart challenger, Tom Perriello. Northam, a throwback to the courtly old Virginia gentleman—who had voted for George W. Bush, twice!—scrambled to present himself as a progressive of sorts, even running an ad calling Trump a “narcissistic maniac” when he finally twigged to the fact that the Democratic base was fired up in opposition to the pussy grabber in chief.

Perriello, meanwhile, a former member of Congress who angered the state party pooh-bahs by deciding to run late last year, secured the backing of Sanders, Elizabeth Warren, and Our Revolution. As in New Jersey, the party smartly saluted. “Every Democratic member of the Virginia legislature endorsed Mr. Northam, as did county chairmen in the state’s 95 counties and 38 independent cities,” The Wall Street Journal reported, adding that voters “rejected the extreme elements that have animated their [party] since Mr. Trump’s election.”

Supporters of Perriello, Wisniewski, and Johnson may have comforted themselves by pointing to the fact that neither Murphy nor Northam ran as center-right, New Democrat–like politicians. Indeed, in 2017, to do so might have been political hara-kiri, since the Democratic electorate isn’t in the mood to buy it. But it’s specious to claim that well-lubricated, moneyed, establishment pols have adopted anything more than protective coloration when it comes to support for various planks in the Sanders-Warren platform. In 2016, some Sanders supporters and various pundits correctly noted that Clinton began to mimic Sanders on some issues, sort of (see: minimum wage, college costs, etc.).

But in the end, a neoliberal is, well, a neoliberal. When neoliberal push comes to economic-downturn shove, Clinton, Murphy, Northam, and their ilk usually resort to talking about tax cuts, budgetary restraint, shared pain, and so on. (For instance, back in 2005, when Murphy led a state panel designed to come up with solutions to a burgeoning state budget logjam, his solution was straight from the neoliberal playbook: pension and benefit cuts for state employees.) They dust off the old Democratic Leadership Council handbook and reread Bill Clinton’s Era-of-Big-Government-Is-Over speech.

Sanders himself, properly eschewing any talk of an independent or third-party option, in speech after speech since November has consistently sounded like an Old Testament prophet is saying that there’s no alternative to the complete transformation of the Democratic Party. In his June 13 op-ed in The New York Times, he wrote, “the Democratic Party, in a very fundamental way, must change direction.” I may be wrong, but I don’t think Sanders means that the Murphys and Northams of the party have to join Our Revolution; instead, Sanders—and the myriad parts of the resistance, the millions who’ve joined march after march since January 21, who flocked to airports spontaneously to protest Trump’s Muslim ban, who have created 6,000 Indivisible groups and thousands of other grassroots movements—wants a bottom-up insurgency to take control of the party and move it leftward.

The Democratic establishment views grassroots activists as both a potential ally against the GOP and a potential threat.

The outcome of the Sanders-Clinton battle, the DNC race, and the votes in New Jersey and Virginia show how hard that will be to accomplish. And we have to acknowledge that a defeat is a defeat. An entrenched establishment, with vast funds at its disposal and a self-perpetuating, bureaucratic flowchart at the national, state, and local levels, won’t go down without a fight. As the grassroots, anti-Trump forces move toward 2018, they had better realize that the Democratic Party establishment views them in equal measure as a force that can help knock off Republicans and as an alarming insurgency that might knock them off, too.

A recent survey by In These Times concluded that in six states—Kentucky, Nebraska, Colorado, Wyoming, Oregon, and Washington—the state party is in the hands of leaders backed by Our Revolution. In California—yes, another defeat—a party organization rapidly moving left nearly elected Kimberly Ellis, effectively representing the Sanders-Warren wing, over Eric Bauman, a party insider, as state party chair. In state after state—and, less noticed, in county after county, congressional district after district—it’s a war with hundreds of fronts. Going into 2018, 2020, and beyond, the real question is: Will insurgents take over the party, and run progressives in local primaries, or will the party co-opt—or crush—the insurgency?

In New Jersey, as elsewhere, the insurgents are hardly giving up. On June 14, a loose, ad hoc coalition of some 30 groups across six South Jersey counties convened a Flag Day Summit outdoor picnic and rally in Mays Landing, organized around a challenge to Representative Frank LoBiondo, a longtime incumbent Republican member of Congress in New Jersey’s Second District, which spans most of the state’s southern half. Among the groups represented were Atlantic County Young Democrats, We the People of Salem and Cumberland Counties, Our Revolution South Jersey, Down Jersey, Indivisible Cape May County, Long Beach Island Progressives, Women Get Shit Done, Egg Harbor Indivisible, and many others, representing thousands of people. One of the groups, Progressive Coalition for NJ-2, is actively seeking to recruit a challenger to LoBiondo in 2018, who’s looking increasingly vulnerable. (President Obama won the district twice, and in 2016 it barely went to Trump.)

But looming over that race is the Democratic establishment, most notably represented by George Norcross, widely acknowledged to be South Jersey’s political boss, whose brother, Donald Norcross, is the Democratic congressman representing the district just to the north, NJ-1. On June 1, George Norcross led a fundraiser, joined by Alec Baldwin, which pulled in a neat $5.1 million for Norcross’s General Majority PAC. The insurgents, organizing county by county, might soon find themselves face-to-face with a well-financed, Norcross-backed party hack. If that contest happens, it and countless others like it across the country will determine if indeed the party will change direction in the way Sanders suggests.