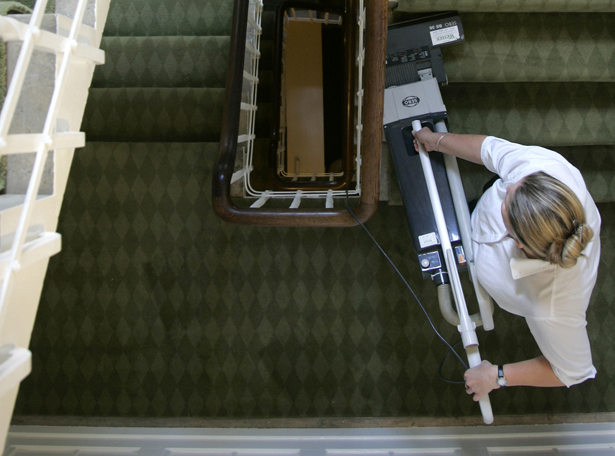 Today’s women spend more time in paid employment but still come home to the second shift. On the typical day, nearly half of them will do housework, but just 20 percent of men will do the same. And women put more time into scrubbing the toilet or doing the laundry—three more hours each week than men. Men carve out three more hours of leisure time. Even mothers who work full-time will still put in a week and a half’s worth more time on household tasks than their male partners each year. When the division of household labor falls along gender lines, where can we turn for an explanation?

There’s a school of thought that women take on more of the childrearing work—moms spend twice the time on childcare each week that dads do—because they are biologically inclined to be caregivers. And it’s true that the female body is the one equipped to carry a pregnancy and breastfeed and that these experiences can create bonds, although there is also evidence that giving dads the time to be present during the earliest moments causes a bond that gets them more involved with their children later on.

But there’s no biological determinant for housework. No gender is physically predisposed to want to do the dishes or take out the trash. This drudgery is necessary—at least if you like eating off of dishes that don’t have old food on them or living in a house that doesn’t smell like the dump. But chores rarely bring the joy and fulfillment of parenting.

At least one cause of the housework gap can be traced back to childhood chores. A variety of studies have found that girls are asked to do more work around the house than boys. One study found that girls did two more hours of chores a week while boys got twice as much time to play. This dynamic carries a lesson for both genders: girls learn that housework falls on their shoulders, and boys learn that girls will clean up after them.

The gendered disparity doesn’t end at time and effort, either. Girls may do more housework, but they don’t get as much pay for it. Sixty-seven percent of boys get allowances, but just 59 percent of girls do. The study finding that girls do two more hours of chores per week also found that boys are 15 percent more likely to get an allowance for doing them. And when they do get paid for it, girls will get less. The lesson: boys are doing something special to be rewarded when they do a load of laundry or mow the lawn, while girls are doing something “natural” that doesn’t require remuneration.

There’s evidence that we carry these experiences as we age. One study found that boys who grew up only with sisters are 13.5 percent more conservative in their views of women’s roles compared to boys who grew up only with brothers. The researchers speculate that because their sisters are given the housework, those boys tend to assume domestic chores are women’s work.

There’s another school of thought, of course, that women just have higher cleanliness standards. “Men are dirty pigs who don’t care!” the thinking goes. But this too is at heart a social construction that culture inculcates in both genders. Marketing messages illustrate the point: only about 2 percent of commercials featuring men show them cooking, cleaning or running after kids, while the majority of commercials featuring women are selling home products like cleaners or furniture. The same study that produced these numbers found that men who view commercials with a male character in a nontraditional role are more likely to favor domestic goals—but few are getting that exposure.

Instead of assuming that women want cleaner homes, remember that they face higher expectations around cleanliness, a judgment that doesn’t impact their male partners. As Jessica Grose has written, she “worried I would be judged for the beef jerky wrappers.… Somewhere lodged within me was the message that it was my responsibility.” Think back to the little girls being handed chores without pay: the cleanliness of the house is your responsibility, we tell them. By the time they are welcoming guests into their own homes, they’ve internalized the guilt for the dust bunnies in the corner.

And any woman who wants to change this dynamic confronts another problem. What man has been called a nag? But when women ask that their husbands pitch in more, they run the risk of conjuring up this old label. A nag is just a person making a request that annoys the requestee. Women are told by parents, advertising agencies and a host of other societal forces that they are responsible for making the house clean, and when they push back, they are slapped with a pejorative. No wonder they spend so much more time tidying up. It might be more exhausting to try and have it any other way.

There is, perhaps, a glimmer of hope. Men seem to be doing more cooking than they used to. In one survey of 900 men, nearly half said they go grocery shopping; 46 percent are responsible for cooking all of their household’s food. Cooking is one of those tasks that comes with a satisfying reward at the end—a delicious meal. But men’s embrace of the kitchen may also be thanks to cultural messages that gourmet chefs are manly: think Iron Chef, Ace of Cakes, Top Chef, Hell’s Kitchen, or nearly any other male-led Food Network show. Is there a way to make wiping a counter or a window manly? Perhaps that holds the key to getting men to get off the sofa and vacuum under it.

Until then, however, housework will be the burden women bear that is perhaps the most obviously inexplicable. If there is any clear sign that society molds the way each gender views unpaid work, it’s household chores. There’s just no good reason for why women are the ones required to take out the broom and the sponge.