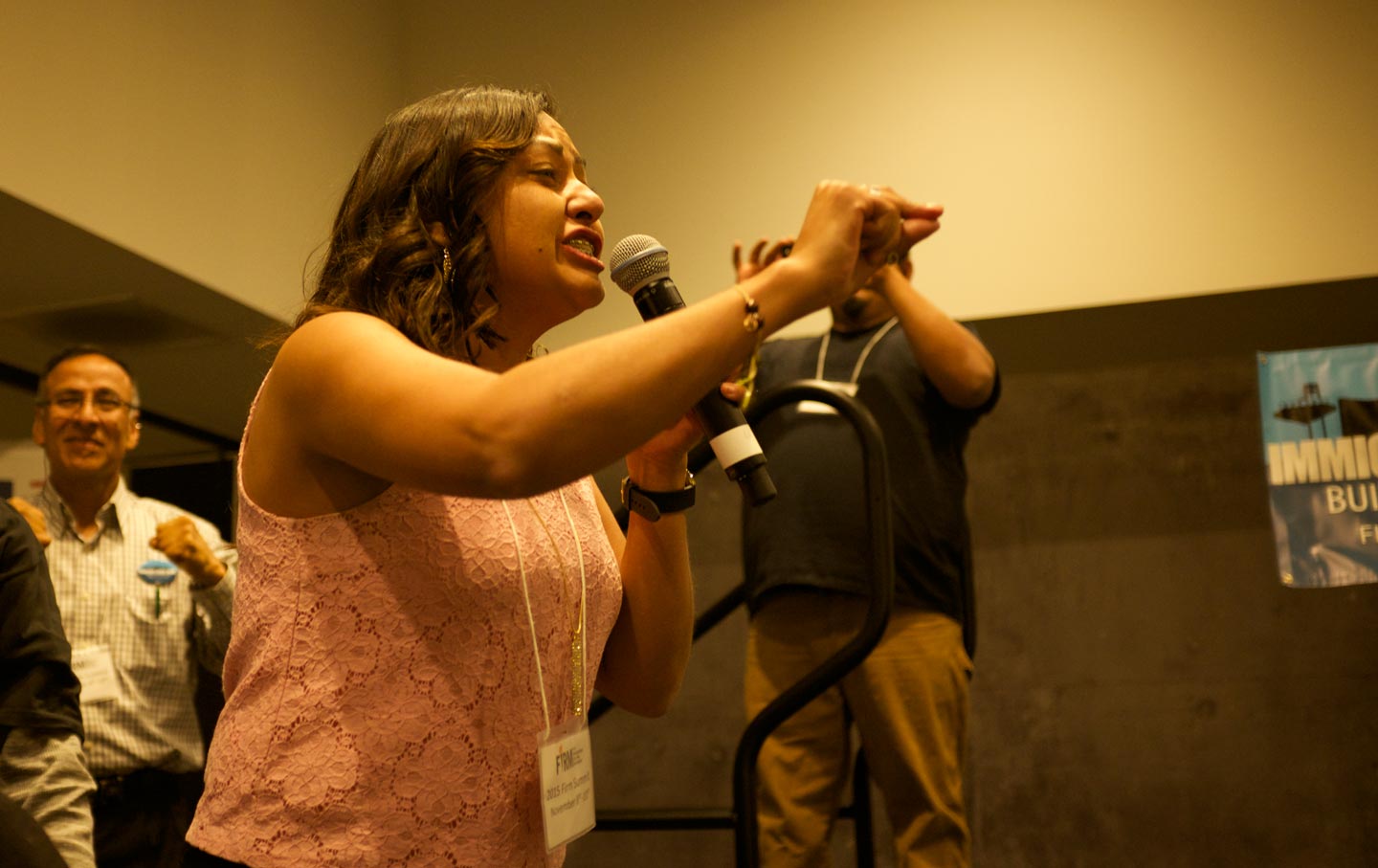 On Monday evening, in front of a Las Vegas hotel ballroom full of immigrant-rights activists gathered from across the country, Kica Matos delivered the breaking news: The US Court of Appeals for the Fifth Circuit had, as expected, affirmed a lower court’s block on the implementation of President Obama’s latest deportation-relief program. And the gathered activists interrupted her with cheers.

Matos, director of immigrant rights and racial justice at the Center for Community Change, couldn’t even get all of that information out at first. “The Fifth Circuit ruled,” Matos said, and the crowd cut her off with applause. She explained the rest, that the ruling was a legal setback for those in the room, among them many undocumented immigrants and those who’d qualify for the program, “But this is a good loss, because now we’ll be able to push the case forward to the Supreme Court,” she said. And the activists cheered again, chanting, “¡Si se pudo!”—“We did it!”

It was perhaps a puzzling reaction, but in keeping with the long-term game immigrant-rights activists are waging to bring their fight to the Supreme Court. Indeed, on Tuesday, the Obama administration pledged to appeal Monday’s decision to the High Court.

The lawsuit, filed in February by Texas and 25 other states, challenged the constitutionality of Deferred Action for Parents of Americans (DAPA), President Obama’s second major deferred-action program. The program would offer a select class of parents who are undocumented immigrants access to short-term work permits and protection from deportation. DAPA is estimated to benefit more than four million people who are parents of US citizen or green card–holder children and who clear a set of other requirements.

To Matos, the four-month wait for a decision after oral arguments was flat-out political foot-dragging by the court.

The Fifth Circuit, in a 2-1 decision, sided with Texas, which argued that it and other states would “incur significant costs” in offering DAPA recipients benefits like driver’s licenses. Judge Jerry Smith, writing for the majority, ruled that deferred action, by giving millions of immigrants work authorization, was also granting them “legal presence” in the country, undercutting the will of Congress, which has not seen fit to pass immigration reform despite more than a decade of attempts on the topic. The majority separately ruled that the US government failed to follow proper procedures in the creation of its program.

Judge Carolyn Dineen King, in her dissent, called the decision “a mistake.” King wrote that deferred action is simply a form of prosecutorial discretion. That is, in a country with an estimated 11 million people who are eligible for removal and the resources to deport only a fraction of that group annually, an immigration agency has the authority and indeed, the mandate, to prioritize whom it will most aggressively pursue for deportation. The regulations that would allow those who aren’t deported to apply for work authorization, meanwhile, are wholly separate from deferred action itself and have been in place for decades, King wrote.

“This gives us a chance,” Nora Hernandez, an undocumented immigrant from Albuquerque, New Mexico, who would benefit from the deferred action program, told me on Monday evening. “We were just looking for a decision, yes or no,” Hernandez said. “If yes, then great, we will get DAPA. If no, we’re going to have another chance to take it to the Supreme Court. And we’re not stopping.”

In October, Hernandez and eight other activists fasted for nine days in front of the Fifth Circuit’s New Orleans courthouse to compel the justices to speed up their proceedings. On Monday, she stood before her fellow immigrant activists to rally them for the fight ahead. Far from being discouraged, she was buzzing with a frenzied joy.

Monday’s ruling came as little surprise. Activists knew the Fifth Circuit’s reputation as the most conservative appeals court in the country. What’s more, the two judges who formed the majority in Monday’s opinion also denied the Obama administration’s request for an emergency stay to allow for DAPA’s implementation while the court battle continued. To Matos, the four-month wait for a decision after oral arguments were heard in July was flat-out political foot-dragging by the court, to delay what she sees as the inevitable implementation of DAPA. “I thought this was a brazen example of a federal court playing politics, and by that I mean they sat on this case forever,” Matos said, citing information on the Fifth Circuit’s website which says that the court endeavors to issue rulings “within 60 days after oral argument.”

The real danger, activists feared, was that a longer delay on what many expected to be a negative ruling could postpone or preclude the Supreme Court from taking a challenge up this term. A long delay could mean, for instance, the implementation of the program could be put off until the tail end of President Obama’s term. Several Republican presidential candidates, most recently Marco Rubio, have pledged to curtail deferred action if elected.

For what it’s worth, multiple legal experts—including Amanda Frost, a professor at American University whose scholarship focuses on federal courts, as well as Katherine Macfarlane, a professor at University of Idaho and a former clerk for a judge on the US Court of Appeals for the Ninth Circuit—told me that there are no requirements for when federal courts must issue decisions, and that four months is not an uncommonly long time to wait for an opinion. A politically motivated, deliberate delay was certainly a possibility here, but Frost said, “The Supreme Court can do anything it wants,” and late-breaking rulings don’t bar the Supreme Court from considering a case.

Still, in her dissent, Judge King called out her fellow judges with some strong words: “I have a firm and definite conviction that a mistake has been made,” King wrote. “That mistake has been exacerbated by the extended delay that has occurred in deciding this ‘expedited’ appeal. There is no justification for that delay.” The Obama administration will likely cite those words in its petition to the Supreme Court to take up the case in its current term.

“I am so happy right now,” Hernandez said Monday night. “This is a victory, because it’s one step more.”