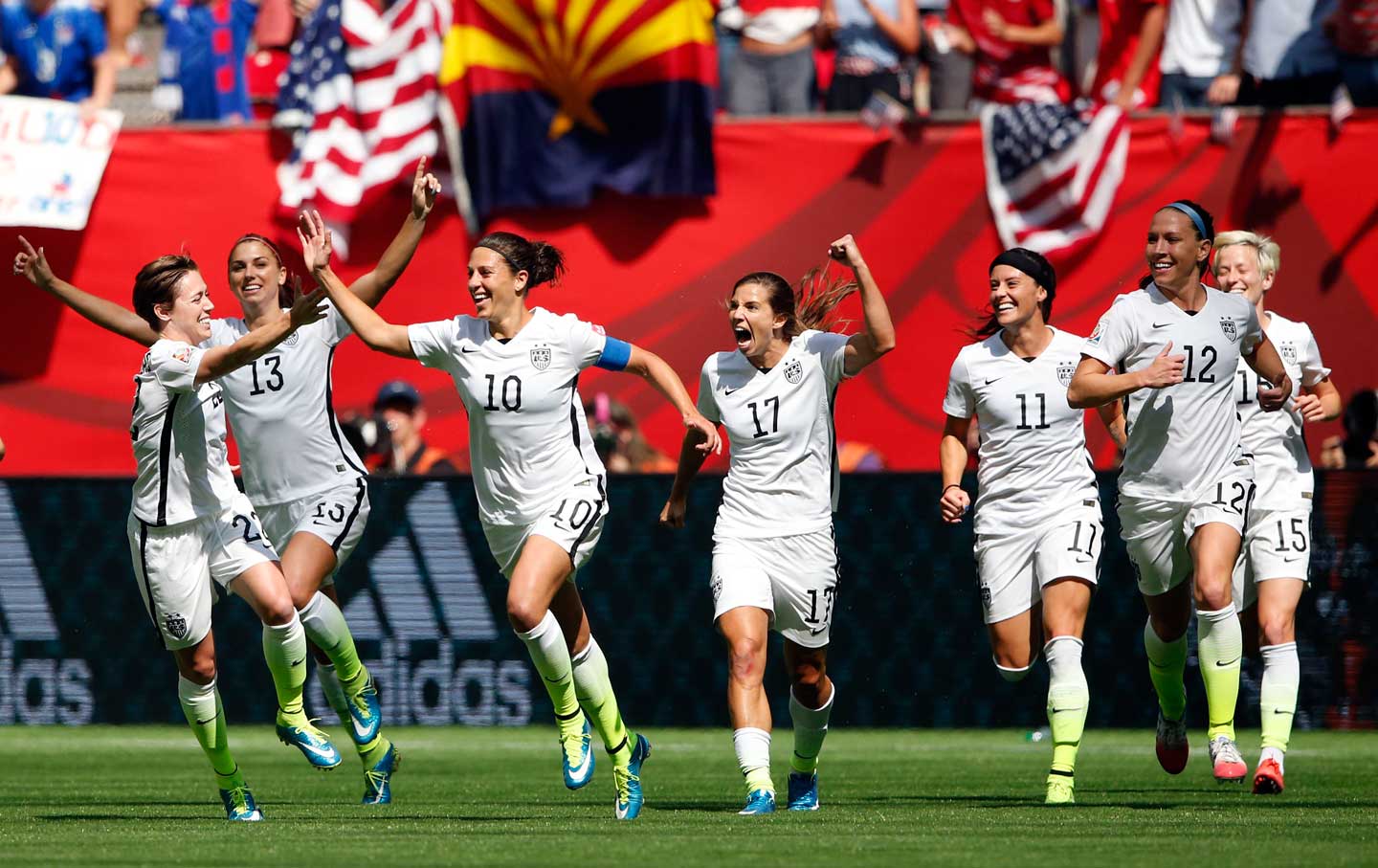 United States midfielder Carli Lloyd (10) celebrates with teammates after scoring against Japan during the first half of the final of the FIFA 2015 Women's World Cup on July 5, 2015. (USA TODAY Sports / Michael Chow)

As I was gurgling joyously after following a thrilling World Cup final, with the USA winning 5-2 over Japan on the strength of “Big Game” Carli Lloyd’s hat trick, my e-mail dinged. I was asked to be on a radio show tomorrow to discuss whether people really, actually care about women’s sports. I typed back a rather rude “no,” because, frankly, I’m done with the media-debate spectacle of “defending” women’s sports. It’s exhausting, like debating with some ham-faced think-tank goon about whether global warming is real or having to argue whether that name of the Washington football team is honestly and truly racist.

It’s like any verbal dispute where fact and opinion are used interchangeably by troglodytic axe grinders who seem to get an erectile boost from the frustrated outrage of others. Every damn Women’s World Cup, every NCAA women’s finals, every Olympics, women’s sports again go on a media trial that would make the old judges of Salem blush. This last e-mail was merely the latest. I have done too many radio shows in the past week where the question was not about the chances of the US Women’s national team or which teams could potentially topple them. They were about why “no one cares,” or whether women’s sports are as good as men’s sports. It’s tired.

It’s also way behind where people actually are. Absolutely, it is great to see Seth Myers and Amy Poehler take up the fight, and it is always fun to see the look on someone’s face when you tell them that John Wooden in his last years preferred women’s NCAA basketball to the men’s game. But it’s also increasingly irrelevant. While I’m being asked why “no one cares,” the Women’s World Cup is getting ratings that would make the NBA or Major League Baseball weep with joy. While ESPN Radio self-parody Colin Cowherd says that men are stronger and better athletes and we appreciate greatness in America and that’s why men’s sports is more fun to watch, his radio contract appears in peril because fewer and fewer people care what he has to say. While academic reports are issued that show only 2 percent of SportsCenter’s coverage is devoted to women’s sports, which is discussed there by anchors with the joy and flair of kids forced to “eat their vegetables,” more and more people are choosing to get their news from different sources if the current ones don’t meet their needs.

It’s a distorted marketplace: one where the financial value of American football, men’s basketball, and baseball has never been higher, as witnessed by the bacchanalia of max contracts being tossed around the NBA. Yet this value is not a function of their exploding popularity but of the fact that they have become the tentpole that keeps the bloated multibillion-dollar basic-cable television industry upright: the last programming in our streaming DVR’d universe that people will still endure commercials to watch.

The desperation with which cable networks cling to these sports like life rafts and aggressively market them under the rubric of “news” distorts how many people demand this kind of coverage and how many are just force-fed what the commercial imperatives are of the basic cable industry. Meanwhile, as the media cling to the past and put women’s sports on trial with metronomic regularity, female athletes are raising the bar throughout the sportsworld.

I was recently asked to name the five individual jocks who comprise my must-see television and, without thinking about it and without trying to make any kind of grand point or bow to the winds of political correctness, three of my five choices were women: joining Steph Curry and Bryce Harper were Serena Williams, ultimate fighter Ronda Rousey, and NXT pro wrestler Sasha Banks (seriously). Shockingly, pro wrestling, which for most of its existence has treated women like the industry was just an extension of Hugh Hefner’s grotto, is writing a script—literally—that says far more about where we are than the two-minutes-a-night broccoli serving of women’s sports delivered on SportsCenter. NXT is delivering a crew of empowering, genius women athletes like Banks, Charlotte Flair, and Becky Lynch who are winning over crowds and changing the expectations of what comprises greatness in the ring. It’s almost unreal to write, but the ways that crowds respond to Banks, Flair, and Lynch speaks with greater clarity about where consciousness is among sports fans than the tired highlight shows that treat athletics like a “man cave.”

So I’m done “defending” women’s sports. Frankly, it’s insulting to the athletes involved to even conceive of it as if they need defending. It’s time to go on offense. It’s time to write more about women’s sports and be part of the grassroots struggle to do what the sports networks and sports-radio talking potatoes won’t do, and that’s tell the stories of what is happening in women’s sports. It’s not broccoli. It’s what we saw when Carli Lloyd lifted that shot over Japan’s goaltender Ayumi Kaihori from midfield: pure fucking joy.