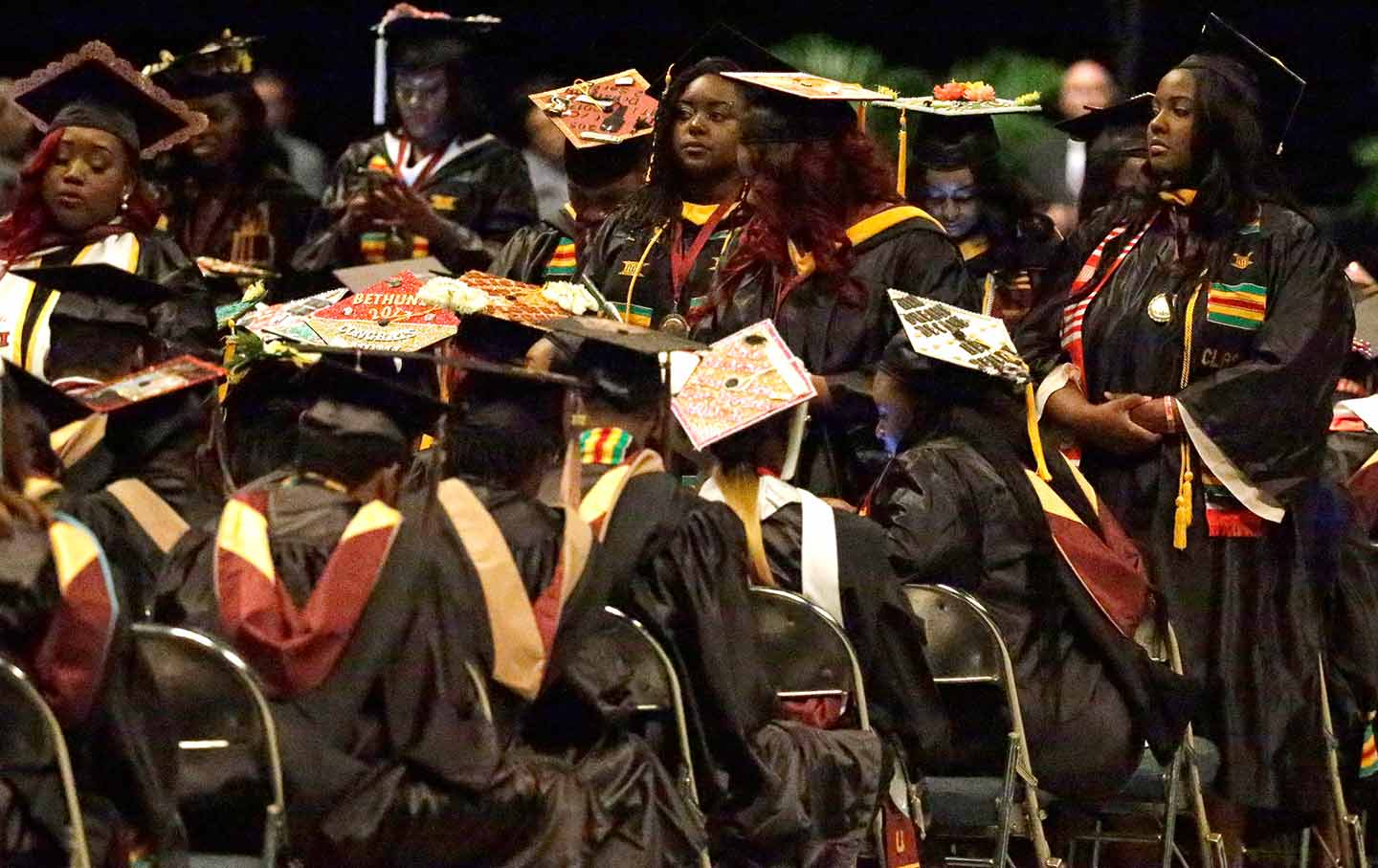 Bethune-Cookman University graduates turning their backs to Secretary of Education Betsy DeVos during a commencement ceremony in Daytona Beach, Florida, on May 10, 2017. (AP Photo / John Raoux)

We were the Bethune-Cookman class of 2017, and we would not allow our legacy to be exploited for political gain.

It had been our graduation. We were there to celebrate the past four years at our beloved university. Our families were there to bask in our hard work and accomplishments. As anyone, we wanted that day to mark a milestone.

And we had known that Betsy DeVos would speak; we had opposed her selection soon after it had been announced. Over 50,000 students, alumni, and others signed a petition expressing emphatic objections. It had been delivered in person to the office of the president and the chairman of our university’s Board of Trustees, and it had been ignored.

At this moment one was forced to raise the question: Where are our warriors?

Prior to graduation my twin sister, Taylor, and I had discussed turning our backs in protest. We understood that, for doing so, we could possibly not receive our degrees. We realized that if we disrupted the ceremony, we might be barred from walking across the stage, a memory we had hoped to treasure. But DeVos unsettled our spirits. And if we felt the celebration of our hard work was being overshadowed, we knew our fellow graduates must feel similarly. We would not allow our objections to be swept aside.

DeVos’s speech quoted heavily from the last will and testament of our founder, as though the calls—to aspire to greatness, never tolerate inequality or injustice, and proceed with courage—were news to the students who have spent four years honoring Dr. Mary McLeod Bethune’s legacy.

Soon thereafter, Taylor and I rose from our seats, side by side. We hadn’t planned when exactly this would happen, but we had felt compelled at the same time.

The first few moments seemed like forever—initially we were the only two standing up. But seconds later we watched our peers join us in what felt like a human wave, standing in solidarity. We stood together in silence while the audience booed. We stood through the drawn-out speech, even withstanding the threats from our very own president. “If this behavior continues,” he had warned, “your degree will be mailed to you.” But we understood that there are times when despite threats, you must point out what is an injustice and what is right.

And the moment Dr. Edison O. Jackson had awarded the secretary with the honorary degree from the university, I had been filled with disdain.

It was our responsibility as graduates of Bethune-Cookman to uphold and honor the legacy of our founder, Dr. Mary McLeod Bethune, the maverick who walked out on her own Board of Trustees when their views were not in line with the legacy she would set for her institution. So we rose up. We turned our backs.

I love Bethune-Cookman University. It is an epicenter of black excellence. It cultivated my mind, expanded my perspective, and challenged me to find innovative ways to express and articulate my views. I have been exposed to research, professors, and peers that have guided me toward academic success.

And we were standing for brothers and sisters at all HBCUs. I prayed that we made our message clear to the Trump administration: HBCUs play an essential role in the social fabric of America. They must be treated with respect. Their history and legacies must be acknowledged and valued in order to, as DeVos attempted to instruct us, “build bridges and gaps.” HBCUs are sending into the world some of the most politically engaged, culturally aware, and technologically savvy students across the nation, including our graduating class. We are the next generation, the ones who will become the game changers, the movers and shakers, specifically as active, empathetic, morally principled participants in society.

It was phenomenal to not only graduate from an HBCU but our H(BCU), and through our protest stand up against an injustice.

Recently, Texas Southern University rescinded its invitation to John Cornyn to be the commencement speaker. Their administration wrote in a statement, “We asked Senator Cornyn to instead visit with our students again at a future date in order to keep the focus on graduates and their families.” This was the simple courtesy we asked of our administration.

Instead, we had to make a stand at our own graduation. The students never asked for this: the publicity, the protest, especially the disdain of our administration for going against their will. But we felt it was our responsibility.

The goal was never to appeal to the masses, but to awaken them. We were what Shirley Chisholm would’ve deemed “Unbought and Unbossed.”

I would change nothing. I began at my university to learn, and I now depart it to serve.