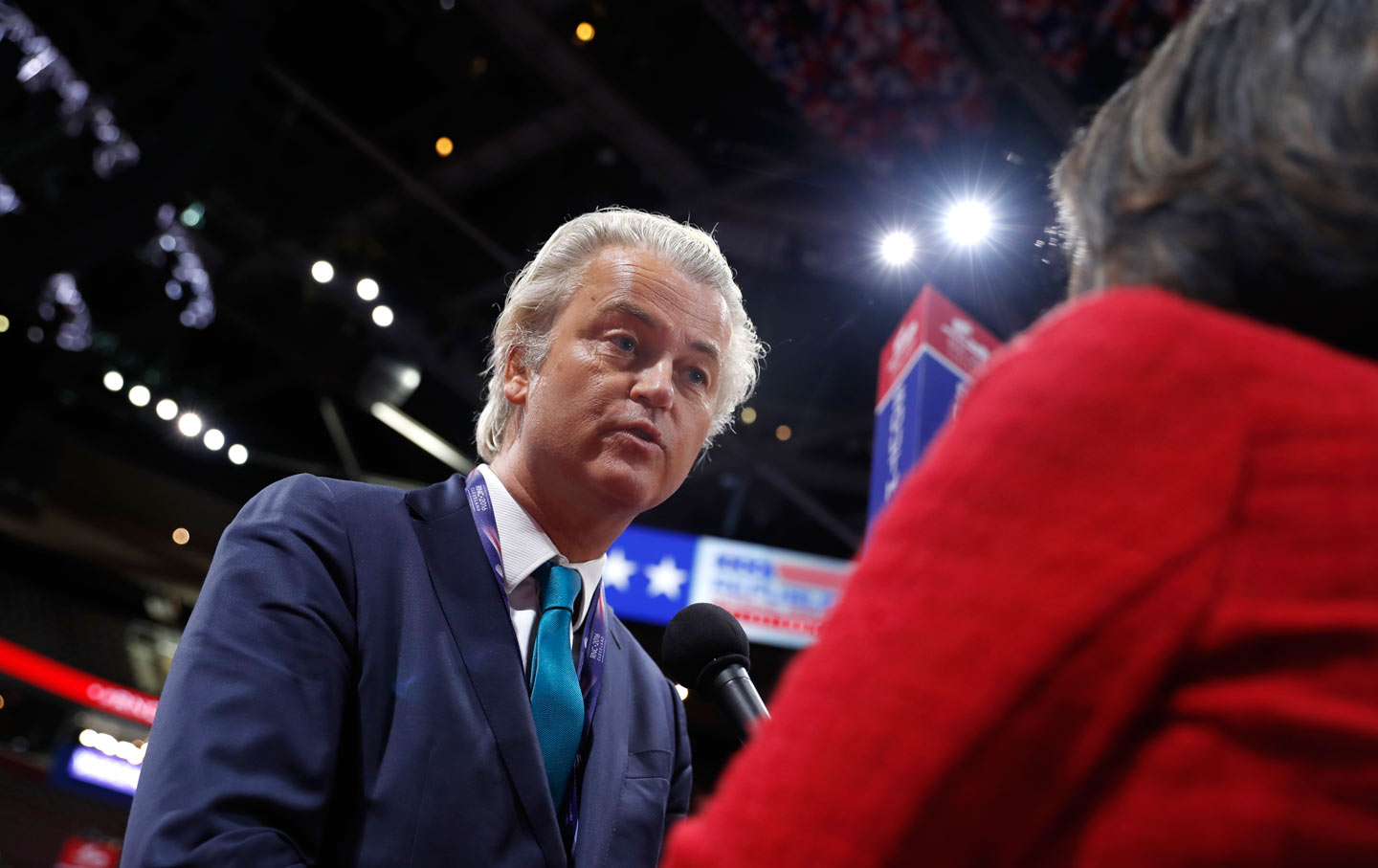 Cleveland—Former New Hampshire US Senator Gordon Humphrey had some strong words for the supporters of Donald Trump who have repeatedly blocked efforts to open up the debate—about the nominating process and their controversial candidate—at this week’s Republican National Convention.

“I sought to be recognized to raise a point of parliamentary inquiry and was immediately drowned out by people I would refer to as brownshirts,” said Humphrey, who is a member of the New Hampshire delegation to the convention.

“This is pretty shocking and shameful. I’ve seen a lot, but this is not a meeting of the Republican National Committee. This is a meeting of brownshirts,” continued the veteran conservative, who, The Boston Globe noted, was “likening the GOP convention leaders to the paramilitary wing of Adolf Hitler’s Nazi Party.”

Humphrey’s comments created an embarrassing stir after he made them in an interview with MSNBC.

"I wish we had political leaders like this..." -- Dutch anti-Islamic politician Geert Wilders on Donald Trump

As Republicans attempt to “turn the page” on a divisive primary campaign and focus on Trump’s fall presidential bid, they do not need their nominee’s name to be associated with European extremists of the past, or of the present. Yet references to Trump as a “neo-fascist,” and to his campaign as an American expression of contemporary European far-right extremism, keep coming up.

Carl Bernstein, the Pulitzer Prize–winning journalist who exposed the excesses of Richard Nixon, refers to Trump as “a neo-fascist in the sense of his appeal and methodology that has to do with authoritarianism nativism and [the] incitement which we’re seeing now.” Trump’s campaign, argues Bernstein, has invited “a debate, a historical debate about what fascism was and is and how Donald Trump fits into that picture”—a debate that the author suggests could include a discussion of “authoritarianism,” “despotism,” and “the desire for a strong man who doesn’t trust the institutions of democracy and government.”

Writing on Trump’s candidacy, The New Yorker’s Evan Osnos observed almost a year ago that

When Trump leaped to the head of the Republican field, he delivered the appearance of legitimacy to a moral vision once confined to the fevered fringe, elevating fantasies from the message boards and campgrounds to the center stage of American life. In doing so, he pulled America into a current that is coursing through other Western democracies—Britain, France, Spain, Greece, Scandinavia—where xenophobic, nationalist parties have emerged since the 2008 economic crisis to besiege middle-ground politicians. In country after country, voters beset by inequality and scarcity have reached past the sober promises of the center-left and the center-right to the spectre of a transcendent solution, no matter how cruel.

As it happens, Europe’s far-right extremists recognize the connection.

Dutch Party for Freedom leader Geert Wilders—whom London’s Daily Mail newspaper has referred to as “the latest and most extreme face of anti-Islamic sentiment to claim leadership of the growing political far-Right in Holland”—is especially excited that Republicans have nominated Trump. “I wish we had political leaders like this in the Netherlands who defend their own country…. and forget the rest,” declares Wilders.

How enthusiastic is the politician who, The Guardian observes, has been “accused of inciting racial hatred after pledging last year to ensure there will be ‘fewer Moroccans’ in the Netherlands,” about Donald Trump’s nomination? So excited that he has traveled to Cleveland to attend the Republican National Convention, where he has appeared frequently on the floor—as a guest of a Tennessee Trump delegate, State Senator Bill Ketron, who says Wilders approached him about attending. (Ketron, an early champion of Trump’s candidacy, says he traveled to Europe and met with the Dutch politician to discuss immigration issues several years ago. The state senator hails Wilders for “sounding alarms” about radical Islam and has told Tennessee media “he speaks his mind…and I agree with his philosophy.”)

That Wilders is excited by the Trump campaign will not come as much of a surprise to those who have heard the Dutch politician (who delights in suggesting that he will be his country’s next prime minister) rant about immigration and spell out his desire to “make sure when it comes to the immigration from Islamic countries that there will be a full stop.”

Since arriving in Cleveland, Wilders has been tweeting and retweeting pictures of himself with top Republicans, such as Tennessee Senator Bob Corker and Iowa Congressman Steve King (under a Twitter account banner that reads  “De-Islamicize”). He spoke to a “Twinks for Trump” gathering of the nominee’s LGBTQ backers. And he has been talking up Trump with Dutch and American media.

“In America you see the same happening as in the Netherlands. The hard working people, what they call the blue collar workers here, no longer feel represented by the political elite. That people no longer want the policy of open borders, immigration and Islamization,” he told Holland’s Telegraaf newspaper.

On the floor of the convention, Wilders (who is instantly recognized in Europe) has been a bit of a curiosity. There are definitely delegates who recognize him—and want their pictures taken with the tall platinum-blond politician. But Wilders has also been taking in the spectacle, snapping photos of the convention and tweeting them with enthusiastic statements (“Great to be here!”) and Trump’s hashtag “#MakeAmericaGreatAgain”

Wilders was even started to sound like Trump. Celebrating with the Republican nominee’s backers in Cleveland, he complained, “We have no real leaders in the Western world any more. We have appeasers—we have Chamberlains instead of Churchills ruling our countries.”

That, says Geert Wilders, is why he wishes there were more political leaders like Donald Trump.