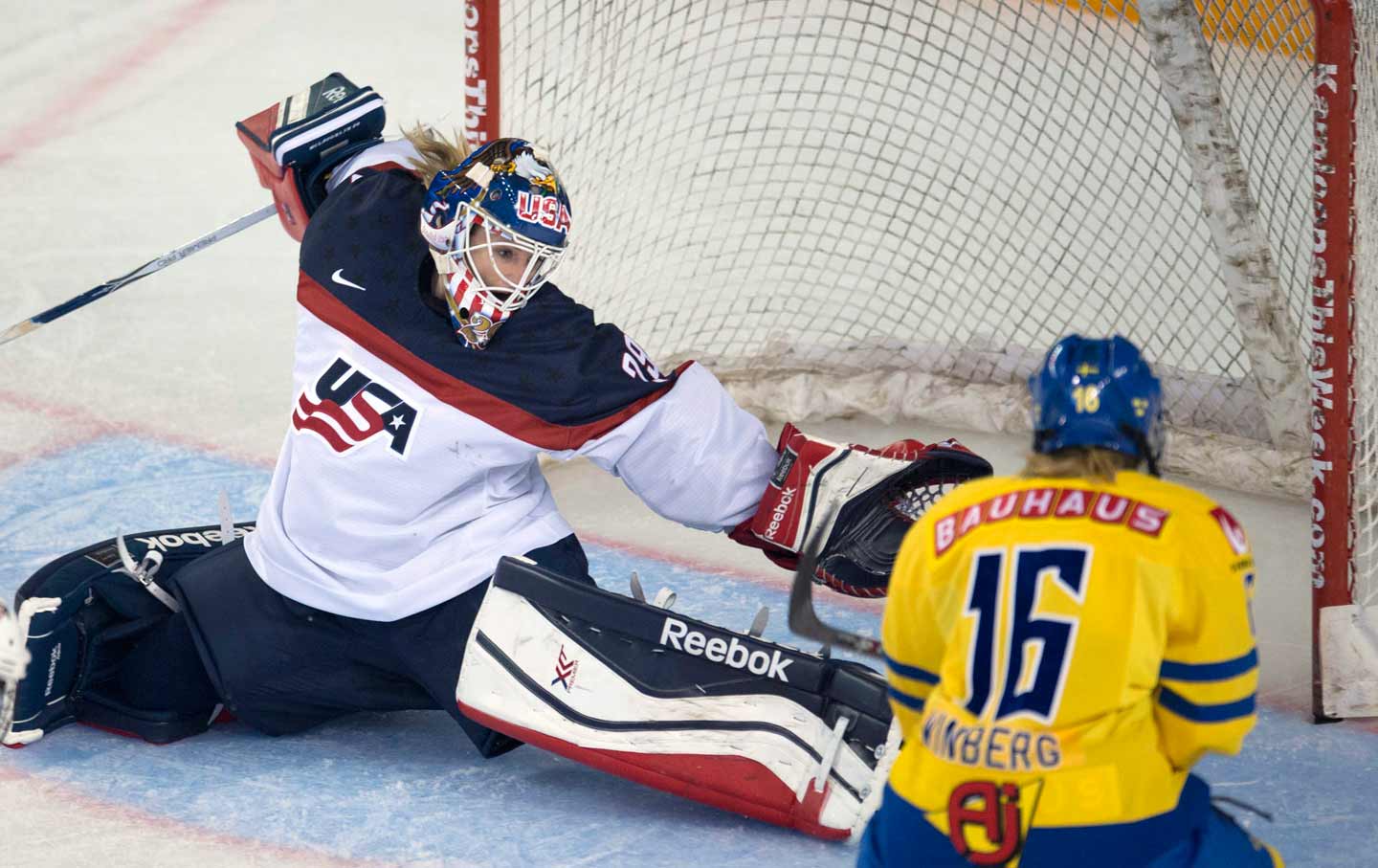 “It is a lady’s business to look beautiful and there are hardly any sports in which she seems able to do it.” –Sportswriter Paul Gallico, 1936

In March 2015, former NCAA ice hockey player Dani Rylan announced the formation of the National Women’s Hockey League, the first paying professional women’s hockey league in North America. For players like Kaleigh Fratkin, a defenseman from British Columbia, it was a life-changing opportunity to continue playing, for a salary, after college. But both as a college player at Boston University and once Fratkin arrived as a pro in Connecticut—one of the league’s four franchise areas, along with New York City, Boston, and Buffalo—she was struck by how many people had never seen a women’s hockey game before.

“They just aren’t aware of it,” says Fratkin, who recently signed with the New York Riveters. Women’s hockey is largely ignored by the mainstream sports media, she says, and fans don’t have any “weird sort of telepathy” that tells them the sport exists.

It’s not just women’s hockey that’s being ignored. According to the University of Minnesota’s Tucker Center for Research on Girls & Women in Sport, women’s athletics receive only about 4 percent of all sports media coverage. Other studies have put television time as low as 1 percent.

Yet, 44 years after the passage of Title IX, women and girls in the United States are playing and following sports in unprecedented numbers. Forty percent of all sports participants are female, according to the Tucker Center, and roughly a third of fans of major sports are women. The evolution of women’s sports over the last four decades has been dramatic; the media coverage, not so much.

“Mainstream sports media outlets are essentially ‘mediated man-caves,’” said Dr. Cheryl Cooky, an associate professor of American studies at Purdue University. “It’s a space where men can go and know it’s going to be by, for, and about men.”

Cooky and two colleagues conducted the 2015 update to a 25-year study on women’s sports coverage. They found that, while blatant sexism by reporters against women athletes—like Paul Gallico and Bill Simmons’s quotes above, for example—has decreased over time, much of today’s sexism is subtle. It’s buried in ledes or conclusions that discuss a female athlete’s appearance or demeanor or her role as wife or mother, or in lackluster commentary and camerawork. Often it means women’s sports don’t get covered at all.

To understand why that is, let’s start by looking at who produces sports coverage. About 90 percent of sports editors are men, and 90 percent are white. The Women’s Media Center’s 2015 report on “The Status of Women in the U.S. Media” showed that just 10.2 percent of sports coverage in 2014 was produced by women. Women of color, who constitute over 70 percent of WNBA players, are particularly poorly represented in the media that cover them—one 2014 report revealed that just four sports editors at the US newspapers it surveyed were black women, and the numbers of reporters were correspondingly small.

All these statistics beg the question: Would we have more reporting on women’s sports if more sports reporters and editors were women? And would the quality of that coverage be better?

“I think in general women are going to be more in tune to women,” said Gibbs.

Howard Megdal, editorial director at Excelle Sports, a media start-up dedicated to covering exclusively women’s sports, also agreed. Megdal is often the only man in the room during Excelle staff meetings; the organization was founded and is mostly staffed by women.

“Diversity makes sense for the reason that you’re expanding viewpoints and you’re eliminating blind spots,” Megdal said. “So I don’t really have any question in my mind that would be helpful on both counts.”

Jason Stallman, sports editor at The New York Times, also emphasized the importance of diversity, but stopped short of concluding that more female sports staffers would result in more or better women’s sports coverage. Purdue’s Cheryl Cooky wasn’t sure either. While she does think having more women journalists makes sense “on the surface,” in her mind the issue goes deeper than that.

“That can’t be the only space where change happens,” Cooky said. “This adage of ‘adding women and stir,’ that that’s somehow going to change things—in many cases what happens is that women, particularly if they’re ‘tokens’ within those institutions or organizations, or are a small minority, or not in decision-making positions or in positions of power—those women are often constrained in terms of their ability to bring about organizational change.”

Even when that sort of change is possible, not everyone agrees it should happen. Earlier this year, ESPN The Magazine hired espnW founding editor Alison Overholt as its first female editor in chief. She’s the first woman to run a major national sports magazine and has said she will increase its coverage of women’s sports. But critics say there’s no demand for it, that the average American media consumer is simply uninterested.

Others counter that if media coverage of women’s sports were of a better quality, more people would want to follow along. It’s the classic chicken-and-egg question—do the media create audiences for new subjects, or do they exist to reflect what audiences already want?

Spain pointed to the popularity of the Little League World Series. “People always say, ‘We watch men’s sports because they’re the best at what they do and women aren’t the best.’ Well, neither are Little Leaguers. So that argument really doesn’t work.”

Dan Shaughnessy, a sports columnist for The Boston Globe, disagrees. He said his job is to focus on what he believes his audience wants to read about, which isn’t women’s sports.

“I know what people are interested in,” Shaughnessy said. He added he doesn’t do many “pro bono” columns.

Shaughnessy is a highly decorated sports writer. He is aware of his influence, but doesn’t believe it’s his responsibility to use that platform to increase awareness of women’s sports.

Based on his contention that women’s sports aren’t “worth watching” (which he later deleted and apologized for), Sports Illustrated’s Andy Benoit, who declined to comment for this article, presumably agrees. To his credit, Bill Simmons, who did not respond to requests for comment, says he has changed his opinion on women’s sports. “My daughter turned me into a feminist,” he recently told Katie Nolan on her podcast. Although The Ringer, Simmons’s new pop culture/sports website, does have several women editors and staff writers, the site’s sports commentary primarily revolves around men’s athletics.

Shaughnessy maintains that coverage of women’s sports is “not gonna be read by the people who generally read me.”

“I can’t afford to do a steady dose of that,” he continued. “You just become irrelevant…. I pretty much stick with what I know and care about.”

Jason Stallman employs a full-time staff of approximately 20 men and three women, and said that his newspaper, too, has more of a responsibility to reflect interest than to grow it.

“At the Times we don’t have any compulsion to be promotional,” Stallman wrote in an e-mail. “We just don’t believe that’s our duty to readers.… How would I decide which sports to try to grow?”

“You have to be aware of the role media plays, and the role that you as a media member play, in covering things, and the ripple effect that has, and how many people are part of the system without realizing that there is a system,” Gibbs explained. “You can’t ignore the power structures that exist. You’re dealing with huge cultural influences that still are about suppressing women and keeping them in their place, so you have to view women’s sports in that context.”

“African-American female athletes have a really steep hill to climb,” Hardin said. She mentioned Claressa Shields, a boxer from Flint, Michigan. Shields won an Olympic gold medal in London in 2012, the first year women’s boxing was an Olympic sport. “Most people don’t have any idea who she is,” Hardin said. Boxing, she continued, is a sport we have a hard time watching women compete in.

Sarah Spain pointed to sports media’s handling of NFL player Ray Rice’s domestic-violence case as an example of the need for diversity in covering all sports. After the Rice incident, many regular sports panelists were “forced to talk about things they had no knowledge of and no perspective on,” said Spain.

ESPN is one of the most diverse sports-media companies. Its women journalists, many of whom, like Spain, had already established their voices in the sports world, picked up the ball.

“From that point forward, it became much more clear to everyone…that it’s very difficult to approach any sort of conversations that have a diverse group of people and subjects and issues if you’re constantly receiving commentary on it from the exact same point of view,” Spain said.

So if we acknowledge that having more diverse newsrooms is a good thing for both men’s and women’s sports, what next?

It’s within the power of people like Alison Overholt and Stallman, editors at major news organizations, to help diversify. Stallman said he has “complete input” on hiring decisions and that masthead editors rely on him to find his own staff.

“We can improve diversity in all sorts of ways,” he wrote. “We can post jobs in different places. We can cultivate talent through The New York Times Journalism Institute. We can forge relationships with young reporters long before we recruit them for jobs. We can endorse diversity candidates for other news organizations’ openings. We can make sure we maintain a work environment that’s open and inclusive.”

For many editors and producers, finding minority journalists to hire can be a difficult task because they tend not to be included in the networks that are easiest to access. As Gibbs put it, “Changing the status quo isn’t easy.” And in the world of journalism, unlike in the world of federally funded education, Cooky pointed out, there is no Title IX equivalent to level the playing field for all genders. Sports media is a business.

Marie Hardin knows her views on women and sports media come off as cynical. But she thinks that ultimately our gendered expectations are too deeply rooted for a sea change to happen in the near future. We have been conditioned to think women and sports—whether the women are athletes, reporters, or fans—are an unnatural combination.

“I wish it were different,” she said. “It doesn’t make me any less of a women’s sports advocate. I want to solve the problem. I just think the problem is a lot bigger and a lot more difficult to solve.”