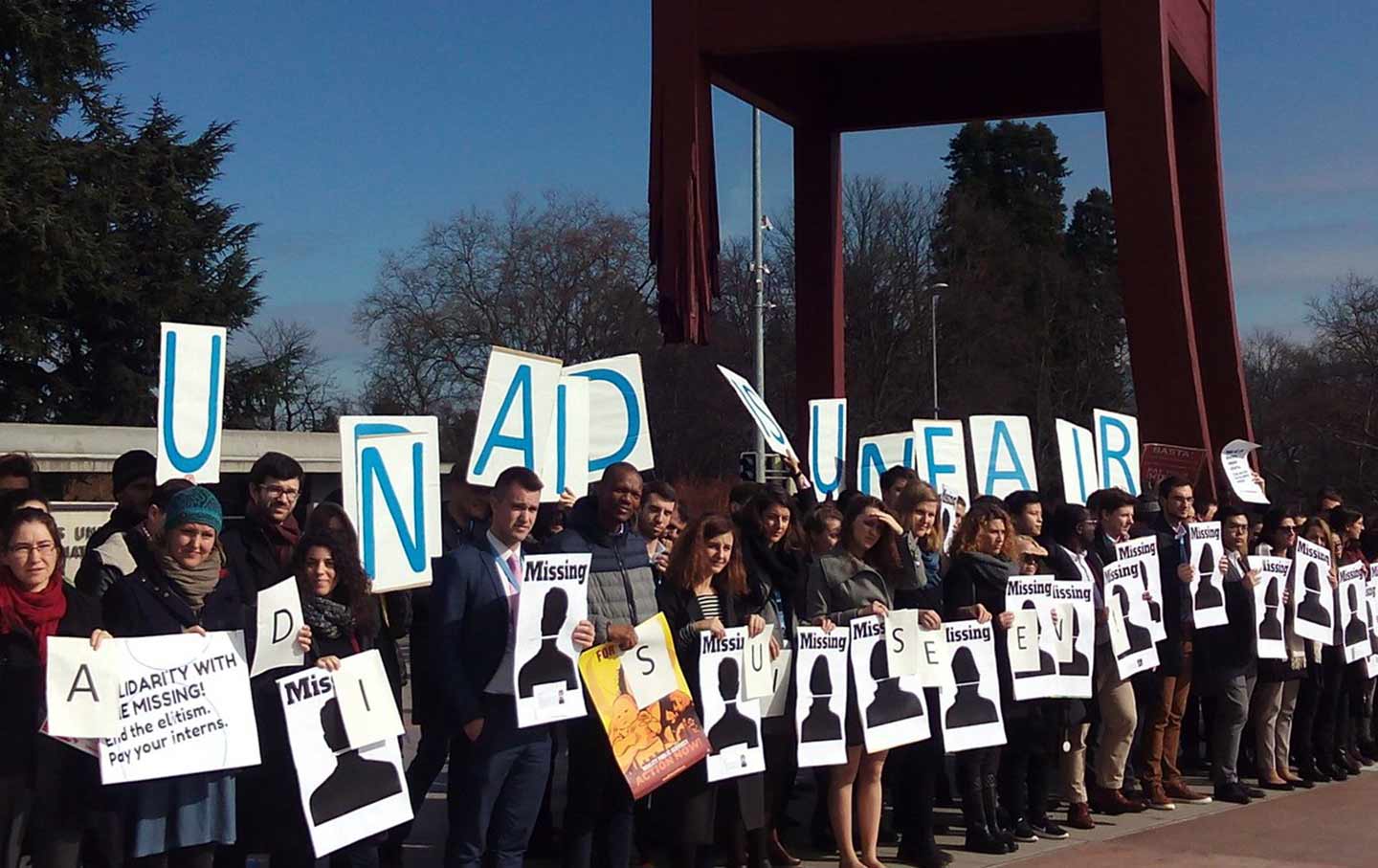 The United Nations is in many ways a benchmark progressive institution. Its numerous declarations set the international standard for human rights, and the frequent collaboration among its 193 member states ensures a large measure of peace and stability around the world.

Yet on February 20 hundreds of UN interns in cities ranging from New York to Geneva participated in the first-ever grassroots action to address a decidedly anti-progressive policy: unpaid internships.

“Our demands are two-pronged: equal access to internships, and, once you’re in the organization, fair treatment, basic workplace rights, and a meaningful learning plan,” Christian Johnson, a United Nations intern and the New York representative of the UN-based advocacy group Fair Internship Initiative (FII), told The Nation.

Though the event was billed as a strike, its participants didn’t actually take the day off. But during lunchtime, over 200 interns gathered for rallies in front of UN buildings in Geneva, Vienna, New York, and elsewhere. Interns in Vienna wore white masks in a silent protest meant to call attention to the interns’ unseen, unpaid labor. Geneva-based interns conducted a similar action, holding “Missing” signs as a reminder of all the potential UN interns who cannot afford to work for free.

In New York, about 50 interns assembled in front of the UN headquarters to sing John Lennon’s “Imagine,” with the lyrics changed to “Imagine there’s no interns.” Johnson stood on a bench and spoke to the crowd about the reasons the strike had been called.

“We are all amply qualified to work in positions in fields related to our studies,” he said. “Yet we choose to work unpaid at the UN because we are committed to the values of the UN—values of integrity, professionalism, and respect for diversity.”

United Nations officials allowed the interns to stage the event, but cautioned them not to violate rules that prohibit UN employees from taking political stances or participating in violent actions. Many interns went back to work immediately after the strike but brought their concerns to supervisors, who responded with “encouraging and supportive messages,” according to Tim Fingerhut, a public-affairs intern and the second speaker at the New York rally. The UN Staff Union even offered its support for the strike and later met with a New York representative of the FII.

The number of interns employed by the United Nations has exploded in recent years. In 1996, the organization employed a total of 131 interns. That number grew to 4,475 during the 2014–15 period. Many, if not all, aspire to a career in international politics. Indeed, the UN’s own website calls its internship program the “ideal start” for such a career.

However, most intern positions do not pay, and the international body expects all living costs to be covered “by either the interns or their sponsoring institutions,” according to the UN’s careers webpage. Furthermore, interns are prohibited from applying for UN jobs for six months after their internship ends, to prevent the use of the program as an inside fast track.

“By not paying its interns, the UN is reducing the pool of potential applicants to only those who are wealthy enough to live without pay for two to six months in expensive cities such as New York City, Geneva, or Vienna,” Johnson noted. “This creates a system of discrimination against underprivileged young people from developing countries and from low-income families.”

Johnson added that the lack of pay means that more interns come from the Global North than the Global South. From 2012 to ’13, for example, 372 interns at the UN Secretariat hailed from African nations, compared with 364 from France alone.

Unpaid internships at the United Nations first received public attention in 2015, when David Hyde, a Geneva-based intern, was found living in a tent near Lake Geneva. Hyde couldn’t afford the city’s high rents and had no choice but to live on the outskirts. He resigned after significant media coverage inhibited his ability to work.

During the scandal, the UN blamed its use of unpaid interns on an unspecified resolution that restricts the global body from paying them and noted that only member states could change the policy.

Nathalie Berger, a film director who worked with Hyde for the upcoming documentary An Unpaid Act, emphasized that unpaid internships are a “question of political will” rather than budgets or administrative decisions.

“If the UN cannot stand by its own standards, then how can we expect other employers to do the same?”

“If the UN, the birthplace of human rights, cannot stand by its own standards, then how can we expect other employers across the world to do the same?” she said.

Farhan Haq, a spokesperson for the UN, reiterated that, despite the solidarity expressed by some staff members, only member states could provide a budget to pay interns.

“We simply just don’t have the money,” Haq said. “There are different UN agencies who have made inroads in terms of setting up trust funds that deal with the question of unpaid internships…[but] we remain ultimately at the behest of the member states in terms of their decision on the budget.”

Hyde told The Nation that interns’ work is often taken for granted. He cited a comment made by Alessandra Vellucci, director of the United Nations Information Service, who said that interns “do not work” but instead are there to learn.

“This is not only a lie; it is an insult to the thousands of young people who, combined, put in over a million hours of unpaid labor for the institution every year,” Hyde said.

Most interns view their time at the UN as work, with 63 percent calling it such in the FII’s internal 2015 World Intern Survey of over 2,000 current and former interns in Geneva and New York.

The day after the strike, the FII sent a letter to UN Secretary General António Guterres urging him to end the unpaid internships. Interns are now petitioning and meeting with UN representatives to try to gain support for their cause. There are even suggestions of another strike.

Johnson said that throughout the FII’s meetings with representatives from the staff union, the UN’s Office of Human Resources Management, and other departments, everyone agreed that unpaid internships “violate the same principles” the United Nations professes to support.

Some UN agencies, such as UNICEF and the World Food Programme, have already taken the initiative and created stipends for their interns. The International Labor Organization began paying a stipend, currently about $2,200 per month, after an intern was discovered sleeping in its basement. Yet the vast majority of interns at the UN still work without pay.

Johnson cited these agencies as examples that Guterres could follow. The secretary general could provide funds, such as $1,500 per month for every New York–based intern, at his discretion, Johnson said.

“Instead, we observe the old dynamic: Secretariat Human Resource officials point the finger to member states, whereas member states often stress that the Secretariat should take the initiative with a concrete proposal.”

Nevertheless, interns are optimistic that the UN will eventually pay them. For now, Hyde and Berger both argue that raising awareness of the United Nations’ labor practices for interns could eventually force it to change its policy.

“While a single intern living in a tent can’t change the policy of the biggest organization in the world, the continued activism and increasing solidarity among interns can—and will,” Berger said.