A construction worker works on the site of the SoMa at Brickell apartment building in downtown Miami. (AP Photo / Lynne Sladky)

For decades, the idea of government-guaranteed jobs for all Americans has stalked the outer edges of political debate. It has been promoted by labor unions and has ideological support among some progressive thinkers, but in recent years hasn’t been seen as a mainstream policy issue for the Democratic party. Now, that may be changing.

Senator Kirsten Gillibrand told The Nation she supports a government-backed jobs guarantee. “Guaranteed jobs programs, creating floors for wages and benefits, and expanding the right to collectively bargain are exactly the type of roles that government must take to shift power back to workers and our communities,” she said. “Corporate interests have controlled the agenda in Washington for decades so we can’t tinker at the margins and expect to rebuild the middle class and stamp out inequality. We need to get back to an economy that rewards workers, not just shareholder value and CEO pay.”

Gillibrand is widely considered to be a front-runner for the 2020 Democratic presidential nomination, and a jobs guarantee will definitely be part of that discussion. Already, major Democratic think tanks have been prepping detailed policies for how the federal government can guarantee that every worker can get a job.

The Center on Budget and Policy Priorities, for example, recently released a paper arguing for a job guarantee through a national infrastructure bank that would set a floor on wages and benefits. The Center for American Progress has also crafted a job-guarantee proposal it dubs “a Marshall Plan for America.”

The CBPP paper* envisions an infrastructure bank that would fund vital projects and ensure that jobs are well-paid, with health insurance and paid leave. The National Investment Employment Corps would guarantee a minimum annual wage of $24,600, with opportunities to advance and health and leave benefit. The plan’s mean expected wage of $32,500 a year is more than three times the highest proposed universal basic income.

The government would also be able to use this job-creating ability to expand jobs in sectors where the market won’t currently invest. “You can imagine greening the entire United States,” said Darrick Hamilton, an economist who co-authored the CBPP paper. “The ideas of the jobs go far beyond my imagination, and the NEIC allows communities to have a say in the projects they need.”

Hamilton noted that a job guarantee “would especially benefit marginalized and stigmatized workers that face structural barriers in the private sector.” As his CBPP paper notes, a job guarantee has a long history in the United States: Early versions of the Humphrey-Hawkins Act of 1978 included language that would have established a Job Guarantee Office, but it was scrapped in favor of an “incrementalist approach.” There are international examples as well, from the Argentina’s Jefes y Jefas program and India’s and National Rural Employment Guarantee Act (NREGA) to South Korea’s Moon Jae-in’s responding to the country’s rising inequality with a promise to create 810,000 government jobs.

A jobs guarantee would also boost wages in the private sector, which have been depressed in part by the consolidation of large corporations. Take hospitals: As they have merged, nurses (disproportionately women of color) find it more difficult to go from hospital to hospital and leverage job opportunities for higher wages. But if nurses knew they could go get a job through the government, the private sector would face pressure to increase pay. “The corporate establishment hates full employment and has fought very hard to ensure the economy never reaches full employment—even though it’s the most successful means of improving human welfare we’ve ever enacted,” said Economist Marshall Steinbaum.

To explore the possibility of Democrats’ running on a guaranteed-job plan, we asked the respected data analytics firm Civis Analytics to not only poll guaranteed jobs, but poll it in the way that would be most likely to gain opposition from voters. They asked respondents: “Democrats in congress are proposing a bill which would guarantee a job to every American adult, with the government providing jobs for people who can’t find employment in the private sector. This would be paid for by a 5 percent income tax increase on those making over $200,000 per year. Would you be for or against this policy?”

We expected that in a generic scenario, people would support guaranteed jobs, but before urging Democrats to embrace it, we wanted to see if the policy might take a hit when Republicans made the issue partisan and talked about tax hikes.

The results of the Civis polling were nothing short of stunning, showing large net support for a job guarantee: 52 percent in support, 29 percent opposed, and the rest don’t know. “Even with explicit partisan framing and the inclusion of revenue in the wording, this is one of the most popular issues we’ve ever polled,” said David Shor, a senior data scientist at Civis Analytics.

The chart below shows net support among different political groups. Clinton supporters overwhelmingly support a job guarantee (69 percent to 16 percent, with the rest unsure). High levels of support among nonvoters are particularly noteworthy. Even among Trump voters, support was only net negative of 18 points, which seems high, but 32 percent of Trump voters support a job guarantee, even with the negative framing. 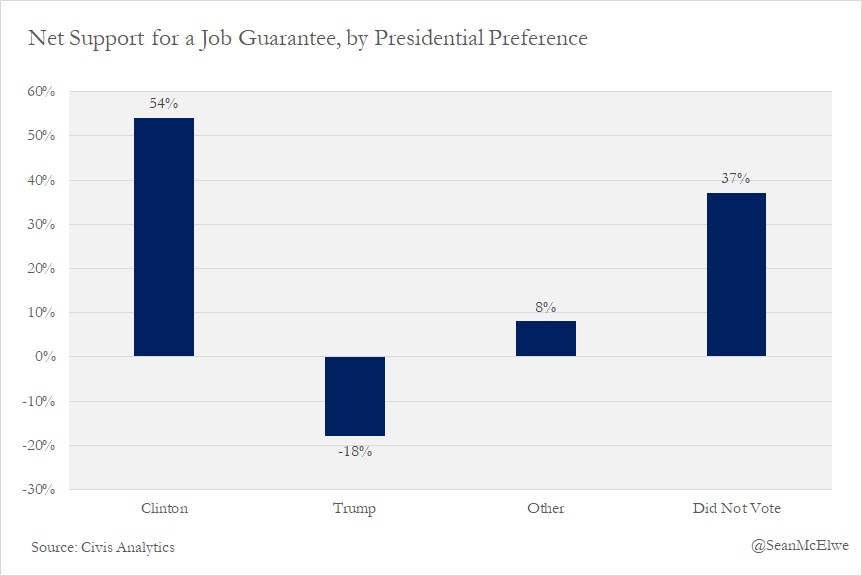 Among the merits of the guaranteed job is that it appeals most to the voters Democrats struggled to mobilize in 2016: low-income voters, and particularly low-income voters of color. Democrats would benefit immensely from increasing the class polarization of the electorate—that is, by winning over more working-class voters at the expense of some wealthy voters.

With a guaranteed-job proposal, Democrats could win three working-class white, black, and Latino voters for every rich white voter they lost. “It’s rare to see an issue with such a strong income divide. Republicans who make less than 25,000 per year are more supportive than Democrats who make more than 150,000,” said Michael Sadowsky, a data scientist at Civis. 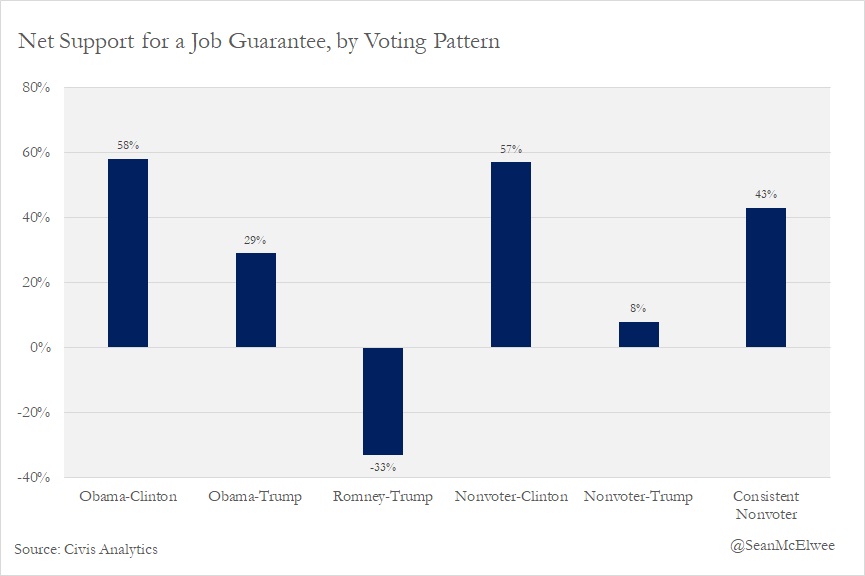 American elections, as progressives have learned all too well, are not decided by the national popular vote. For that reason, our think tank Data for Progress modeled state-level support for guaranteed jobs using data provided to us by the Center for American Progress, with the help of Senior Adviser Austin Rochford. We find that the job guarantee polls stunningly well in all 50 states. Even in the state with the lowest modeled support, Utah, support is still 57 percent. Deep-red states like West Virginia (62 percent support), Indiana (61 percent), and Kansas (67 percent) all boast strong support for a job guarantee. Indeed, the places where the job guarantee is most popular might be surprising: DC (84 percent), Mississippi (72 percent), North Carolina (72 percent), Hawaii (72 percent), and Georgia (71 percent) have the highest estimates, though support is also high in solid-blue states like California and New York (both 71 percent). 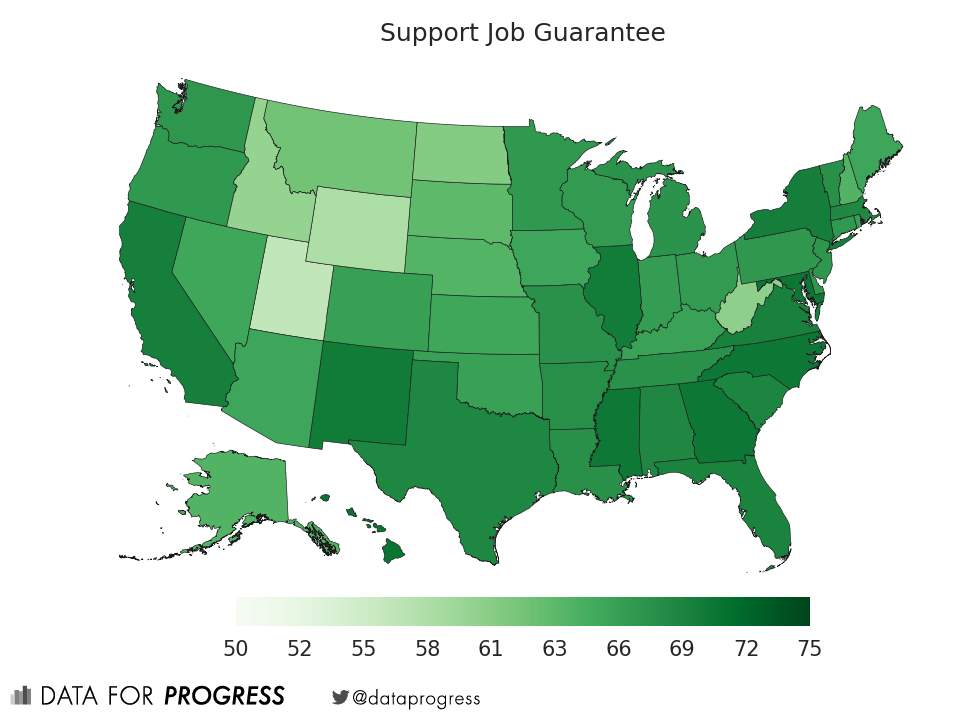 “The results of this research were just staggering. Americans not only overwhelmingly oppose cuts to programs like Medicaid and nutrition assistance. They also support really bold progressive alternatives—including a jobs guarantee,” said Jeremy Slevin, the director of advocacy for the Poverty team at CAP. “If there was any doubt as to whether progressives should champion far-reaching proposals to help people find good-paying jobs, I hope this erases it,” he said.

That appears to be happening already, from Gillibrand to several congressional candidates for 2018. In deep-blue NY-14, Alexandria Ocasio-Cortez said she’s proposing a federal jobs guarantee and sees guaranteed jobs as a way to set a floor on working conditions. “It’s basically a public option for jobs,” she said. “It guarantees a bare minimum which employment can’t go below.” She also wants jobs that solve externalities provided by the market, such as green jobs.

When we talked to Dan Canon, a congressional candidate in Indiana’s ninth district (where Trump won by a 27 point margin), he said he enthusiastically embraced a federal jobs guarantee and talked about it frequently on the campaign trail. “It’s one of those things that surprised me in how widely it has been accepted by people of all political stripes,” he said. Canon connects a job guarantee to the need for infrastructure: “We have been trained out of thinking about commonsense solutions. People need jobs, what do we do? Give them jobs.”

The job guarantee could end up being a key issue in some Democratic primaries this year. Kerri Evelyn Harris, a Democratic candidate running against incumbent Tom Carper for Senate in Delaware, said, “It is time to offer American citizens guaranteed, quality jobs, with growth potential in the government sector.” She added, “There are an array of areas that could use additional workers, from infrastructure to social work. A guaranteed-jobs program would not only help inject hope back into communities which have broken spirits due to decades of dismal job opportunities, but it will also help pump money into the economy by way of purchases by the newly and adequately employed.”

A job guarantee offers a way for the Democratic Party to return to its roots as a multiracial working-class party. As President Donald Trump recently proclaimed, “We know the single best anti-poverty program is a very simple and very beautiful paycheck.” Indeed, and the government should guarantee one.

(*Due to an editing error, Hamilton’s paper for the CBPP was referred to in one instance as the “CBPP plan.” It was a paper commissioned by the think tank, but does not necessarily represent CBPP’s official policy stance.)