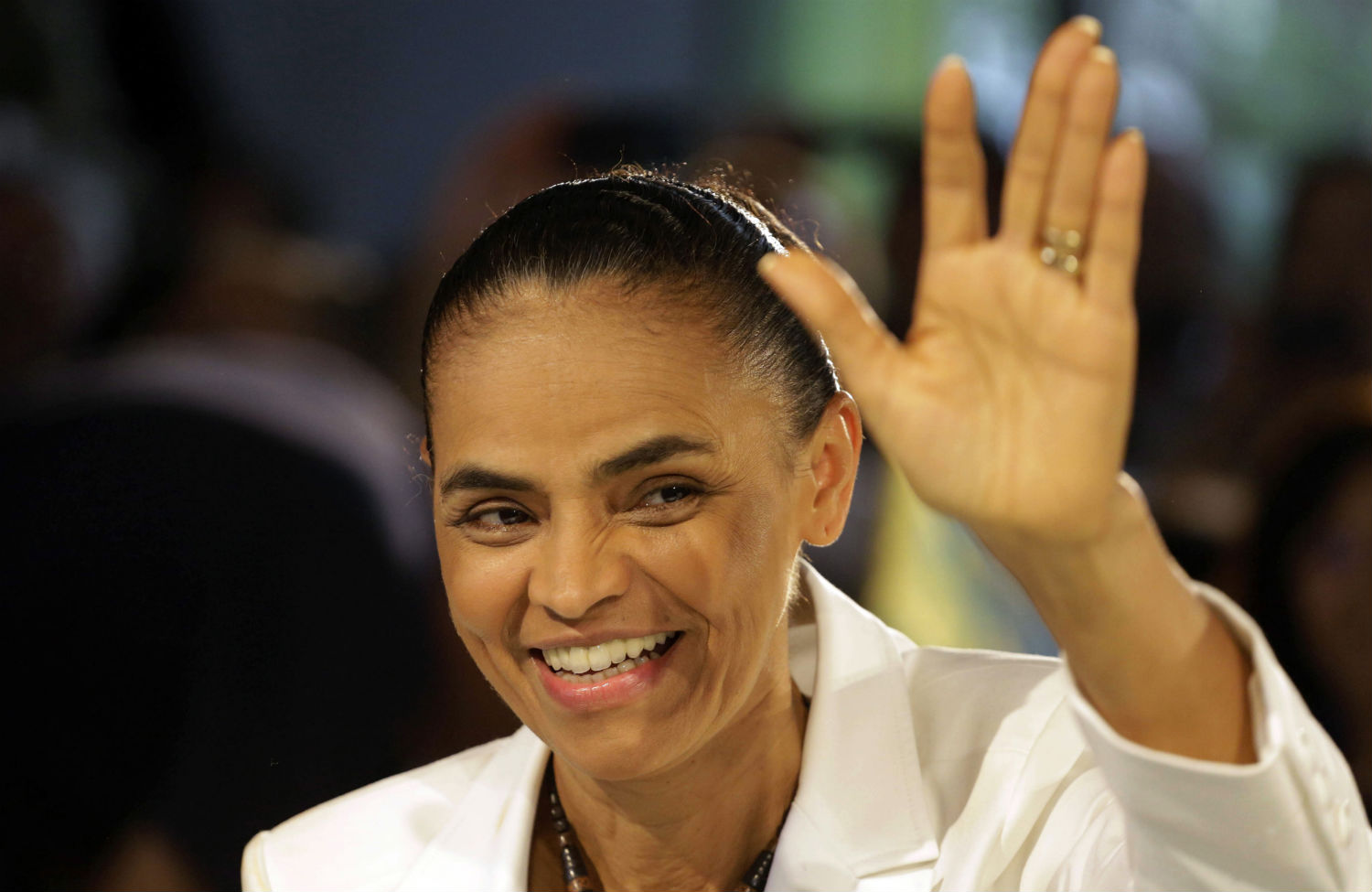 Wall Street woke up feeling a little sad this morning, for its favorite candidate in Brazil’s presidential election, Marina Silva, placed third. This means the second-round vote, scheduled later this month on October 26, will be between the incumbent Workers Party candidate Dilma Rousseff and the neoliberal technocrat Aécio Neves. Rousseff is, as of now, favored to win.

Over the last two months, financial markets made it clear they wanted Silva to be the next president of Brazil. They really, really wanted her. A month ago, when Silva was unexpectedly rising in the polls, predicted to win, Brazil’s stock market soared, rising nearly 7 percent. Investors goosed Brazil’s real, for a short time making it “the world’s best performing major currency in the three weeks after Silva announced her candidacy on Aug. 16 and polls showed her in the lead.”

But then Rousseff rebounded in the polls and the love disappeared. Last week, the wolves of Wall Street exercised their “veto,” punishing both Brazil’s currency and stock market. The real tumbled to the lowest it’s been in six years and stocks suffered their worst one-day plunge in three years. Brazilians are used to this sort of thing. It happened every time Dilma’s predecessor, Luiz Inácio Lula da Silva, ran for the presidency (1989, 1994, and 1998) until, in the 2002 contest he finally won, he signed a pledge to the International Monetary Fund that he’d maintain a budget surplus and not renege on foreign debt. This time, though, it wasn’t enough to save Silva.

English-language readers (like actor Mark Ruffalo, who supported Silva until he learned that she was an evangelical Christian who opposed same-sex marriage) might be excused for thinking she had a shot. All the tribunes of the finance capitalism—such as The Wall Street Journal and Financial Times—had breathlessly lined up behind her, and none more so than The Economist. Under headlines such as “The Silva Surger,” “The Measure of Marina,” and “The Times They are A’Changing,” the magazine sold her virtues. London’s Times was calling for a Brazilian “regime change.”

Marina Silva is impressive. Born into a dirt-poor family of rubber tappers in an Amazonian backwater, Silva is of African descent and would have been the first person of color to lead Brazil. As Lula’s minister of the environment, she had a good record slowing Amazon deforestation and promoting a class-based environmentalism that recognized that the rainforest is a place where poor people live and work. But in this election, she distanced herself from her activist past and aligned with Brazil’s agricultural and financial industries.

Brazil’s political culture is complicated, to say the least. One needs be cautious mapping a left-right continuum on to it, especially one based on United States politics. There are many committed activists who have broken with the PT over corruption and economic policy and will abstain in the second round. And Silva’s fall undoubtedly had something to do with the least progressive of motives: racism.

Silva though did come broadly to represent “the right,” at least in economic terms, promising tight budgets, high interest rates (to keep the bond markets happy), and the prospect of aligning Brazil more closely with US trade. The Economist hopes her candidacy signals the “turning of the political tide in South America after a dozen or more years of leftist hegemony.”

Maybe. In addition to Brazil’s upcoming run-off, important elections are coming up in Argentina, Uruguay and Bolivia—and only in the latter is the left assured a victory. But for now—assuming Rousseff wins—it looks like the largest economy in the region and the seventh-largest in the world will continue to be governed by the Workers Party (PT).

A second term for Rousseff will be especially important in the realm of international affairs. Since coming to power in 2003 with Lula, the PT has steered a foreign policy fairly independent of Washington. First under Lula and then Dilma, Brasilia’s diplomacy hasn’t been “radical.” It’s not Havana in the 1960s seeding insurgent movements throughout Latin America or in the 1970s sending tens of thousands of troops into southern Africa to overthrow Washington-backed white supremacy. And it hasn’t been confrontational. It’s not Hugo Chávez standing up in the UN and waving away George W. Bush’s lingering smell of sulfur.

But as the region’s economic center of gravity and an important member of the so-called BRIC countries, Brazil has been absolutely indispensable in countering Washington on trade, war and surveillance. At the United Nations, for instance, in 2004, Brazil and Argentina took the unprecedented step of sharing the two-year seat reserved for temporary Latin American members of the Security Council (Brazil sat the first year, Argentina the second). The cooperation has continued. Argentina currently holds the seat and Brazil backed its efforts to slow down Washington’s rush to war in Syria (that is, the first time around, in the fall of 2013). And it has worked with Germany to promote a General Assembly resolution on “The Right to Privacy in the Digital Age,” meant to rein in NSA snooping. Brazil also passed a similar national “Bill of Digital Rights” law (Forbes complains that the law is “breaking the internet,” while one of the pioneers of the Internet, Tim Berners-Lee, says the law will “unleash a new era—in which the rights of citizens in all countries are protected”).

If it were not for Brazil’s often quiet maneuvering over the last thirteen years, Washington would have had the upper hand on any number of issues that would have made the world a nastier, more unstable place—extending its extraordinary rendition and torture program, for instance, isolating Cuba and Venezuela, implementing a hemisphere-wide Patriot Act, or institutionalizing corporate power in “Free Trade Area of the Americas.” The diplomatic cables released by Wikileaks a few years ago give a good window onto how Brazilian diplomats gently derailed the United States’ hemispheric agenda; often times, Washington’s envoys were long out of the room before they realized they had been played. Lula recognized Palestine’s claim to a state within its 1967 borders and Dilma spoke out against Israel’s disproportionate use of force in its recent assault on Gaza.

Earlier this year, the Obama administration had hoped to get the Organization of American States to slap Venezuela, over its government’s response to street protests. But Dilma knows a double standard when she sees one. In 2013, she faced protests significantly more massive than anything taking place in Venezuela, against which her security forces reacted brutally. Brazil, though, got no grief from Washington. So she defended Venezuela: “Venezuela has its own history. It’s not Brazil’s role to tell it what to do, since that would violate our foreign policy. Brazil doesn’t comment on the internal situation of any country,” she said; “For Brazil, it is very important to always look at Venezuela from the point of view of its achievements, through all of this, in the area of education and health care.”

Brazil is constantly assailed by US pundits for failing to “uphold UN principles,” or the values of the OAS, by not joining the jackals to go after the enemy of the moment is, be it Venezuela, Libya, Syria or Russia. In fact, not doing so is precisely to uphold the founding principles of those organizations, including non-aggression, multilateralism and sovereignty. Venezuela is currently running unopposed to take the non-permanent Security Council seat reserved for Latin America, reflecting a regional unity that would have been put in jeopardy with a Silva win (her foreign policy platform called for much closer relations with the United States on trade and security).

Brazil, for sure, has its own interests. The country cooperates with Argentina at the UN, but it wants its own permanent seat on the Security Council. And Rousseff, dealing with economic problems and social demands at home, has kept a lower profile than Lula and works with Washington, compromising when need be (some felt the UN privacy resolution was watered down).

But there is no doubt that Hillary Clinton, imagining what her foreign policy will be when she enters the White House, would rather have had Marina Silva (not to mention Neves) than Dilma Rousseff in Brasilia.

UPDATE—Tuesday, Sept. 7, 10:30 am: Mark Healy makes a good point, that the direction of influence of financial markets has been reversed since Lula was repeatedly whacked by financial markets. Now, Wall Street and The City is likely to take its cues from São Paulo much more than the other way around, and that the Silva Boom was heavily promoted by Brazil’s banking-media-business complex, to which the The Economist et all joined enthusiastically. I think that’s right, though I tend to presume a global “financial market” with different regional hubs, with influence moving in multiple directions simultaneously. That the whole apparatus goes under the name “Wall Street” is an historical vestige, and as early as 1956, the former president of Guatemala, protesting the United States’ 1954 coup in his country, opened his book, The Shark and Sardines, with these questions:  “Wall Street, where does it start?  Where does it end?”