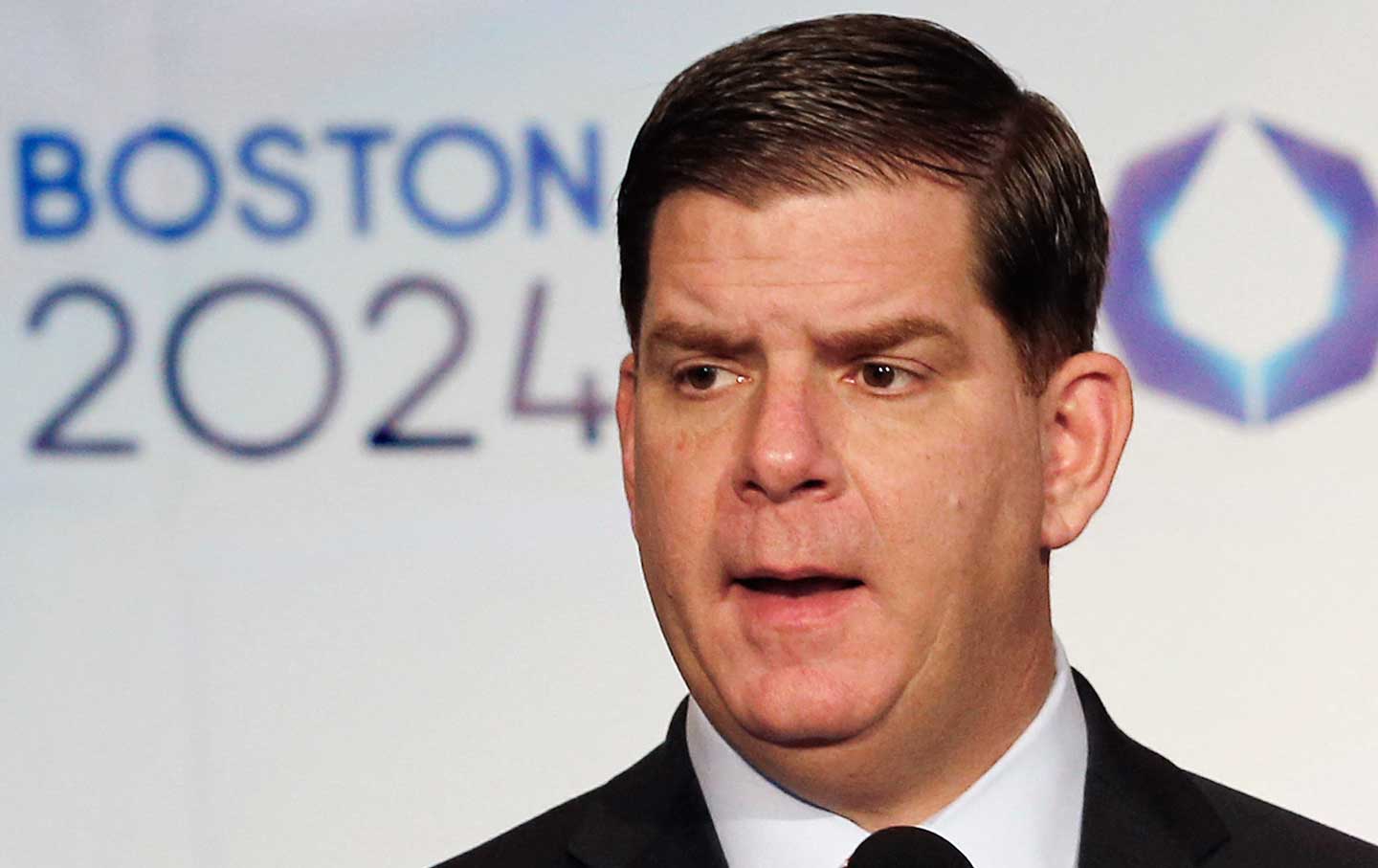 Boston Mayor Martin Walsh speaks at a Boston news conference after the city was picked as a bid for the 2024 Olympic Summer Games, July 27, 2015. (AP Photo/Winslow Townson, File)

“What we do matters.” “We are many, they are few.” “The squeaky wheel gets the grease.”

These phrases are what people trying to effect change often say quietly to avoid slouching into despair. Today, they are what crews of Bostonians are singing to one another over rowdy, joyous toasts, confident that their actions just beat back the most powerful plutocrats in town. Make no mistake about it: The 2024 Summer Olympics were on a runaway freight train toward Boston until serious groups of committed citizens got in the way. Local sports legends like Larry Bird and David Ortiz were part of the 30-person ceremonial board of directors preaching that the Olympics would be all financial boom and patriotic pageantry. The powerful—and less telegenic—brokers behind them had the money, the media, and the mayor. But they did not have the people, and that made all the difference.

Do not listen to the city’s embarrassing mayor, Marty Walsh, who is trying to pose as if the bid was pulled because he stood up and refused to sign a document this week “that puts one dollar of taxpayer money on the line for one penny of overruns on the Olympics.” His hurried spin is so amateurish, it seems to have been diagrammed with scented Magic Markers. Walsh has been an Olympic booster from day one, and taxpayers’ picking up the tab on Olympic spending has been a standard part of the International Olympic Committee (IOC) hosting agreements since before Jesse Owens was in diapers. In a slapdash press conference, Walsh tried to get in front of the collapse of his city’s bid by saying that, as much as he loves the Olympics, they are not “worth handing over the financial future of our City and our citizens were rightly hesitant to be supportive as a result.”

They became “rightly hesitant” just hours after Walsh derided Olympic adversaries by saying, “The opposition for the most part is about 10 people on Twitter.” This actually sparked the hashtag trend #10PeopleOnTwitter, as masses of people mocked the idea that those concerned about the debt, displacement, and militarization of public space brought by the Olympic games were only a minuscule minority. As local activist Kade Crockford tweeted, “Honestly the city of Boston deserves an apology from this mayor for how he tried to force the Olympics on us.”

This absence of “public support necessary” did not happen by accident. It was built because ordinary folks took time out from their lives and fought with a desperate love for their city. By the time they had finished hosting educational panels, attending neighborhood meetings, passing petitions, and filing freedom-of-information requests; by the time they were done enduring the snarky mockery of Boston Globe columnists as well as a a mayor more interested in the city’s construction and security interests, polls had opposition to the Olympics stubbornly over 50 percent and not budging.

"Every time they disseminated a lie, we were able to knock it down."

There were two coalitions working against the Olympic bid: No Boston 2024 and No Boston Olympics. They were different people with different tactics, but they shared both goals and a willingness to operate in concert with one another.

I contacted Robin Jacks, who was a member of the No Boston 2024 activist group, and asked why she believed they won. She said, “They knew public support wasn’t going anywhere. They had no way to get support up; they had zero grassroots organizing or social media presence, but we were pretty solid in that department. Every time they disseminated a lie, we were able to knock it down.”

Another No Boston 2024 activist, Jonathan Cohn, said to me that the bid was undermined by the committee’s “complete lack of understanding of the media landscape in the 21st century.”

“They seemed to believe that if they could win over the Boston Globe editorial board, they would be able to shape the public discourse,” he said. “That may have been the case in 1995 but not in 2015. Social media offered activists a way of not only connecting with each other but also easily and quickly debunking Boston 2024’s lies spoken at City Council hearings, press conferences, dog-and-pony show community meetings, etc. You didn’t have to read the story about what happened the next day; you could engage with it as it happens.”

I also reached out to Chris Dempsey of the No Boston Olympics coalition. He said, “We were outspent more than 1,000 to 1, but fortunately the people of Massachusetts know how to weigh pros and cons, not just listen to the people with the bigger megaphone. The IOC’s auction process leads to bad outcomes for cities. They are trying to impose a 19th-century business model on 21st-century cities like Boston. People here realized they’d be better off passing on the boosters’ deal.”

This is an absolute victory for the people of Boston. It is particularly critical for those who would have been most likely to suffer under the weight of a massive police and military presence in the city. But it is also a very positive development for everyone who loves Olympic sports. The IOC is going to change its methods of extortion only when city after city across the globe say “hell no” to its outlandish demands, always conjoined with the economic prerogatives of local business titans and the politicians they grease. Bostonians should be proud. Their city has now joined Kraków and Oslo among those who have sent the IOC packing. Now it’s the turn of Los Angeles, Toronto, Budapest, Hamburg, Paris, and Rome, all in the running for 2024, to add their names to this list. Thank you, Boston, for saving your city and rebuffing those who would ruthlessly exploit what we love about sports and remake our cities into unrecognizable dystopian theme parks.