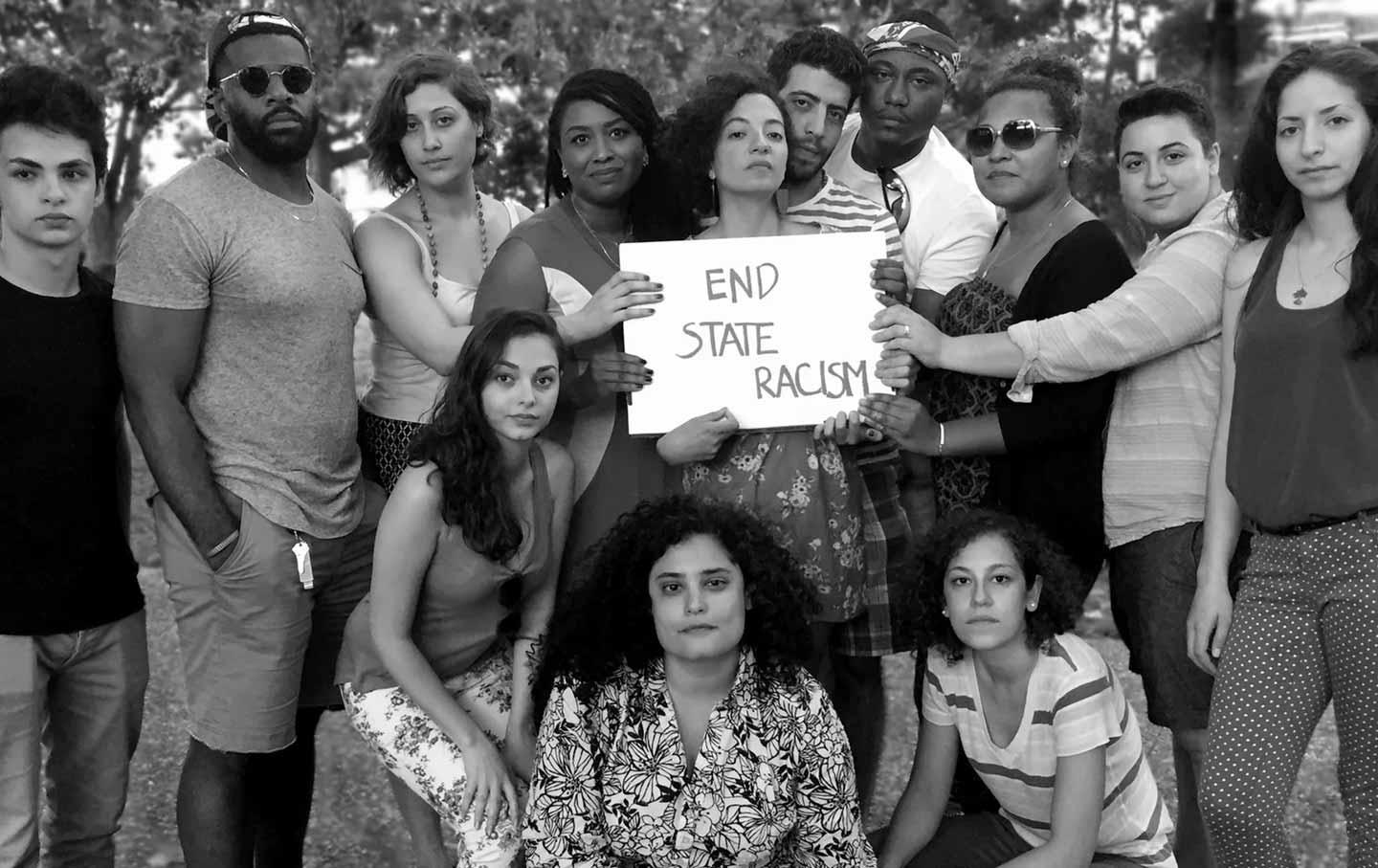 Earlier this month, a group of organizations including Black Youth Project and the Dream Defenders—both leaders in the movement for black lives—released a video that seeks to highlight similarities between black Americans’ and Palestinians’ struggles against state violence. “When I see them, I see us,” various Palestinian and black activists and artists say as still images of people who have been killed at the hands of police or other armed forces fill the screen. “We are not statistics. We are not collateral damage. We have names and faces.”

In explaining the intent of the video, one of the its creators told Al Jazeera America, “Here were two groups of people dealing with completely different historical trajectories, but both which resulted in a process of dehumanization that criminalized them and that subject their bodies as expendable.” Another person behind the video’s production said that Israel and the United States “strengthen their state power by convincing much of the public that uprisings in Ferguson and Gaza are signs of pathological criminality, as opposed to critical actions of resistance against state powers that actively engage in historical genocide.”

Talk of solidarity between human-rights struggles happening in different parts of the world may appear as mostly symbolic—the province of consciousness-raising online campaigns like the video, sign-on letters, and statements of support from celebrities with high profiles. But the same day that the video launched online, one of the women it features was in the midst of her own struggle and surrounded by a showing of black-Palestinian solidarity. On Wednesday, October 14, Rasmea Odeh stood outside a courthouse in Cincinnati after her attorney argued before the US Court of Appeals for the Sixth Circuit that she had not received a fair trial in federal court in Detroit late last year and is being denied her right to remain in this country as a naturalized citizen. Rallying around her were about 100 people, including representatives from black organizing circles in Chicago and members of Cincinnati’s Black Lives Matter contingent, who stood shoulder to shoulder with members of Chicago’s Arab immigrant and Arab-American communities.

Odeh is a 68-year-old woman who in October 2013 was arrested at her home in suburban Chicago and charged with lying to obtain her citizenship. The federal government claims that she had deceived immigration officials during her application process in 2004 because when asked whether she had ever been incarcerated, Odeh replied that she had not. In fact, Odeh had spent 10 years in prison after being sentenced to life by an Israeli military court for her alleged involvement in the bombings and for her involvement in a Palestinian organization Israel deemed illegal. She was released after a decade as part of a prisoner exchange and moved to Jordan, where she lived until immigrating to the United States in 1995. During this incarceration, Odeh says she endured various forms of torture, including rape, and that she gave a false confession as a result. According to her supporters, Odeh is one of the first Palestinian women to speak about the Israeli military’s use of rape as a form of torture.

“I support this case because I know this story,” said Brian Taylor, an organizer with Cincinnati Black Lives Matter. Taylor said that while he had learned the specifics of Odeh’s case only days before the appeal hearing, he immediately connected the racially based targeting Odeh’s supporters say that she and other Palestinians face to police violence that victimizes black Cincinnatians, such as the recent killings of 43-year-old Sam DuBose by University of Cincinnati police and 22-year-old QuanDavier Hicks by Cincinnati police.

“Your struggle against oppression is my struggle against oppression, whether it’s in the West Bank or in downtown Cincinnati or four hours away in Chicago,” Taylor said on the courthouse steps. A busload of people inspired by Odeh’s story and by her decades of organizing in the United States and the Middle East had come to pack the courthouse to support her fight against what they say is a politically motivated attempt to have her deported.

The reason Odeh failed to mention her previous incarceration, her legal team argues, is that she lives with chronic post-traumatic stress disorder, a condition that causes her to suppress memories related to that period of detainment and torture. “When she answered the questions, there was a blockage,” Odeh’s attorney, Michael Deutsch, told the panel of three judges during the appeal hearing. As a result of her condition, she dissociates and blocks out events, he said. Judge John M. Rogers seemed to understand the point Deutsch was making. “She’s not saying that she didn’t know the truth. Her mind changed the nature of the question,” Rogers said, rephrasing Odeh’s team’s argument. In keeping with this logic, her response to immigration official’s question might be seen as “analogous to a translation error,” he said.

According to Odeh’s legal team, she was not allowed to testify during the Detroit trial about her incarceration, which resulted from Israel’s accusation that she had participated in a bombing in 1969 Jerusalem that left two dead and others injured. And an expert who could have testified as to Odeh’s PTSD and its relationship to that immigration interview was also barred from testifying. During this month’s appeal, Odeh’s legal team asked that that this expert be allowed to testify and a new trial be granted. “You need the expert to explain her [Odeh’s] testimony,” Deutsch told the judges. The court will either do just that or affirm Odeh’s conviction, which would mean 18 months in prison followed by deportation.

Odeh’s supporters maintain that charges that she misled immigration officials are politically motivated. Why? First, they come a decade after she became a citizen. Then, there’s the fact that federal prosecutors failed to get charges to stick after the FBI’s raids in 2010 on a group that’s come to be known as the Midwest 23, activists in Minneapolis and Chicago allegedly linked to terrorist organizations—or,as others argue, involved in solidarity activities with Palestinian and Colombian organizers. One of the Midwest 23 is Hatem Abudayyeh, Odeh’s colleague at the Arab American Action Network (AAAN) in Chicago. Because they couldn’t get the charges to stick, federal prosecutors have gone after Odeh as a consolation prize, her supporters say.

The government’s efforts to deport Odeh have sent shock waves through communities in the United States and abroad that have been affected by her work, particularly in the Chicago neighborhoods where she launched a women’s arm of AAAN, growing the Arab Women’s Committee to a membership of 600 women who work together on political education and have “lobbied around immigration and public benefit policies,” according to one report on Odeh’s work.

Nesreen Hasan, 28, is one Palestinian-American who took the bus from Chicago to support Odeh during the Cincinnati hearing. She told me that Odeh is a Palestinian feminist icon and that it’s Odeh who drew her to activism around Palestinian issues. “They disregard the work she’s done with women for 40 years,” Hasan said of the attacks on Odeh. “There’s this American stereotype that Arab women are backwards, and here they are prosecuting a woman who empowers other women.”