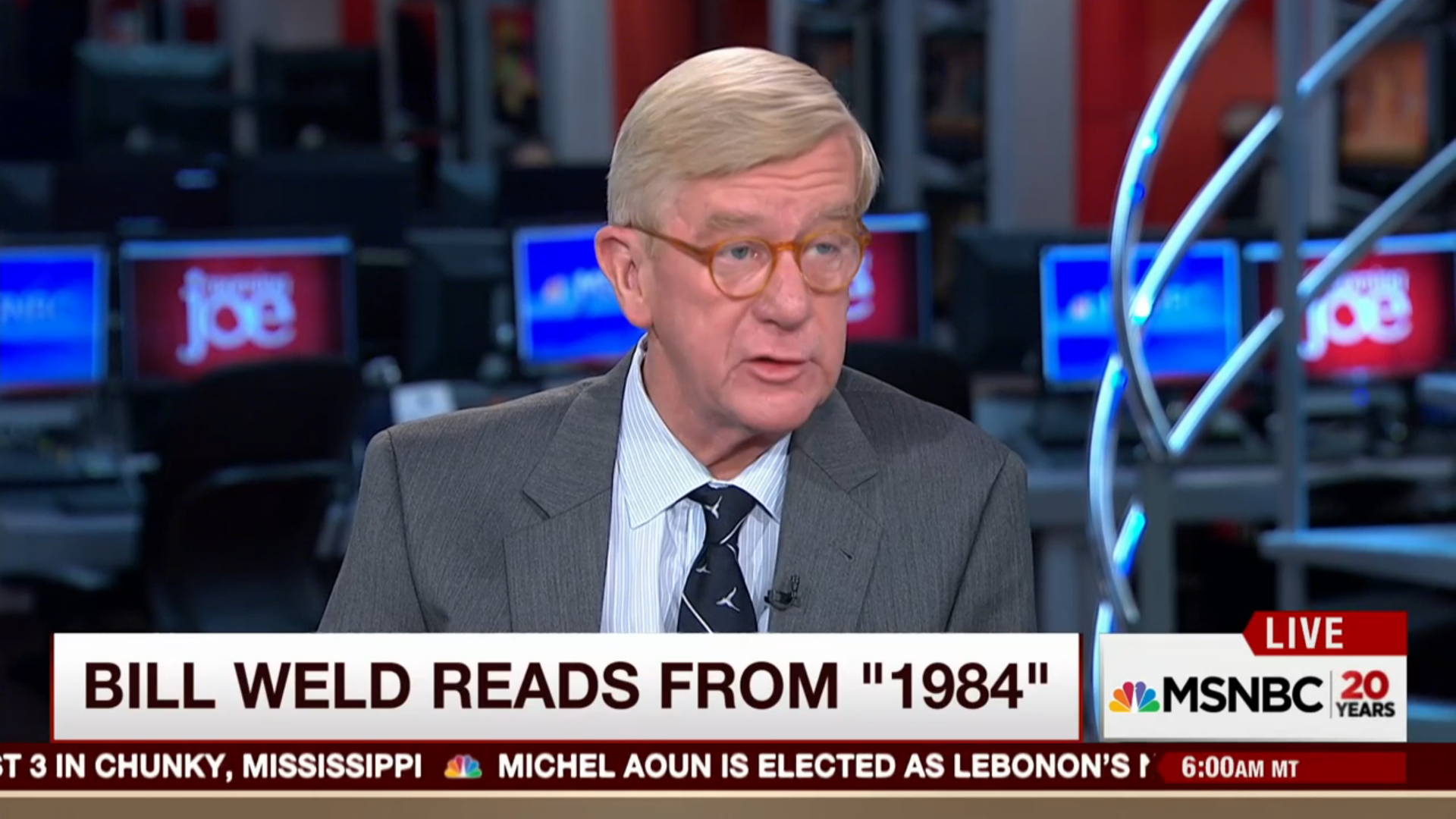 George Orwell wrote about politics, even as he fretted that “In our time, political speech and writing are largely the defense of the indefensible.” At the heart of Orwell’s writing was an argument that it was necessary to reject calculation and caution in favor of the unlikely, perhaps even dangerous, statement of truth. “We have now,” he wrote in the late 1930s, “sunk to a depth at which restatement of the obvious is the first duty of intelligent men.”1

That is what Bill Weld has been doing in the days leading up to the 2016 presidential election, as he has committed political heresy on behalf of what he argues is a national necessity: defeating Donald Trump. As the former Republican governor of Massachusetts now seeking the vice presidency on the strongest ticket in the history of the Libertarian Party, he has given a series of interviews in the week leading up to the election in which he has effectively argued a brief for Democratic presidential nominee Hillary Clinton.2

Don’t get Weld wrong. He’ll cast his ballot (in a safely Democratic state) for the ticket on which he is running, and he hopes that the Libertarians will gain enough votes to pass the 5 percent national threshold that locks in federal matching funds and helps to assure ballot access in the states. He says of his run with former New Mexico governor Gary Johnson, “We’ve got on the merits the best ticket.”3

But Weld does not hesitate to make clear his sense that stopping Trump is a priority. “I see a big difference between the Republican candidate and the Democratic candidate,” he told MSNBC’s Rachel Maddow one week before Election Day. “And I’ve been at some pains to say that I fear for the country if Mr. Trump should be elected. I think it’s a candidacy without any parallel that I can recall. It’s content free and very much given to stirring up ambient resentment and even hatred. And I think it would be a threat to the conduct of our foreign policy and our position in the world at large.”4

Weld, who has long been critical of Trump, is now vouching for Clinton.5

In a striking exchange with Maddow, the Libertarian candidate was asked, “Why would that [battleground-state voter] not weigh threat to the country, fear for the fate of the country against hope the Libertarian Party gets its 5 percent this year? Why would a person pick the Libertarian vote in that case if the stakes are that high between voting for Clinton and Trump?”6

“Well,” replied Weld, “the person could very well decide not to [vote for Weld and Johnson on the Libertarian line], and for someone deciding not to do that, I have a lot to say about Mrs. Clinton that has not been said by others recently and that I think needs to be said. I mean, I’ve known her for 40 years. I worked with her, I know her well professionally. I know her well personally. I know her to be a person of high moral character. A reliable person and an honest person, however Mr. Trump may rant and rave to the contrary. So I’m happy to say that. People can make their own choices.”7

As a a former United States Attorney and head of the Department of Justice’s Criminal Division, Weld ripped FBI Director James Comey’s late-stage announcements regarding Clinton e-mails as “incomprehensible” and said, “I’m here vouching for Mrs. Clinton, and I think it’s high time somebody did, and I’m doing it based on my personal experience with her, and I think she deserves to have people vouch for her other than members of the Democratic National Committee, so I’m here to do that.”8

That was a remarkable statement coming from the presidential nominee of a party that is still bidding for votes. But it was just one of many remarkable steps the candidate has taken in this “first duty” moment.9

Weld has actually been reading aloud from Orwell’s book 1984.10

Opening a copy of the dystopian novel as he sat on the set of MSNBC’s Morning Joe, Weld began, “So, you know, Big Brother is running the country in George Orwell’s 1984, and every day he beams two minutes of hate into the minds of everyone in the country. So here’s three sentences: ‘Before the Hate had proceeded for 30 seconds, uncontrollable exclamations of rage were breaking out from half the people in the room,’” Weld read. “In its second minute the Hate rose to a frenzy. People were leaping up and down in their places and shouting at the top of their voices.… The horrible thing about the Two Minutes Hate—that’s the name of the exercise—was not that one was obliged to act a part, but that it was impossible to avoid joining in.… And yet the rage that one felt was an abstract, undirected emotion which could be switched from one object to another like the flame of a blowlamp.’”11

The 2016 presidential campaign has been unprecedented in so many ways. We should perhaps not be surprised by Weld’s decision to go off message in order to get the national discourse on message.13

Yet, in his blunt statement of the truth, which comes at considerable cost to his own prospects, Weld cuts through the emptiness and the ugliness to say that which matters about what cannot be allowed to become “post-truth” politics.14

“I think his whole campaign has been full of dog whistles and stirring up resentment and not too strong a word, hatred,” he explains, before concluding with the obvious yet necessary statement that “the most important thing for the country is that Donald Trump not be elected president.”15