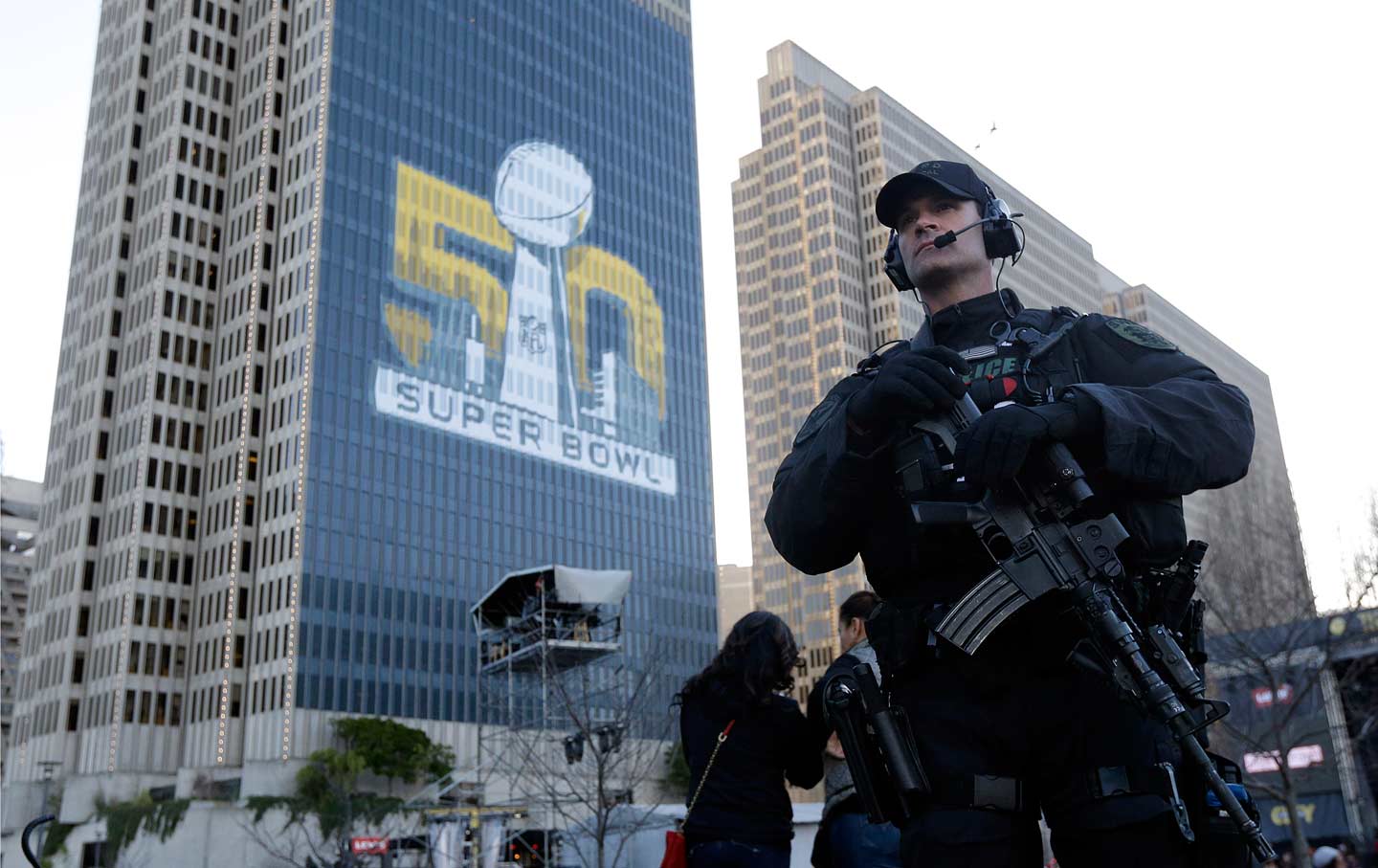 Davey D is a legendary, pioneering hip-hop journalist and the founder of Davey D’s Hip Hop Corner. He has also lived in Oakland, California, for decades, chronicling the volatile social movements throughout the region. Here I interviewed him about why many in the Bay Area are greeting the arrival of the Super Bowl not with parties but protest.

Dave Zirin: How would you describe the mood in the Bay Area about the Super Bowl? What are you seeing?

Davey D: There’s a lot of anger and a lot of concern over two main things. First, the Super Bowl is coming at a time when massive amounts of people have been displaced. So, it’s added insult to injury to see this pageantry, all this money being spent, record amounts of police, elected officials falling all over themselves, while you have folks who gave this region its soul and its heart who can’t afford to live here anymore. Downtown Oakland used to be a place that a lot of people didn’t go to, then there were folks who are artists who said, “We’ll make this space our home.” So you they moved into a lot of those rundown buildings, fixed them up, made it a destination place, and now they’ve been replaced. You go to some of these places downtown and you’ll see a hamburger selling for $15 dollars!

The second thing that’s going on are all the police killings that have been taking place. The most egregious is the killing of Mario Woods, which happened in early December over in the Hunter’s Point area. Here’s a guy who was walking away from the police, he was surrounded by about 12 police officers who claim they felt their life was threatened. They shot him down in a hail of bullets. That comes on the heels of a number of killings. The other notable one was the killing of Alex Nieto which happened a year before. A security guard, who was on his way to work, had a Taser to his side, was in his neighborhood, Bernal Heights, and was eating a burrito. I believe it’s been reported that somebody saw him, didn’t recognize him, so we assume that’s a gentrifier, who called the police and said, “There’s an armed man.” They showed up, and—from a distance of 75 to 100 feet or yards away—shot him. Then of course the texting scandal which followed the Alex Nieto thing, which is that officers were caught sending racist and homophobic text messages, both on and off duty. There was a promise that they would be fired. That hasn’t happened.

Why protest the Super Bowl in connection with these issues?

I’m sure people would say, “Why don’t you petition your government officials, elect people to office, or follow a prescribed path to address your grievances?” And that has happened. People put Kamala Harris into office and Kamala Harris has disappeared. Diane Feinstein said she would do something. And she has disappeared. Ed Lee, the mayor, people were told he has a civil-rights background and he wouldn’t let these things happen on his watch. And he’s disappeared. And the list goes on and on. And when I say they disappeared, I mean they’ve very clearly chosen a side. They’ve chosen the side of the developers, they’ve chosen the side of the techno-archy, and they’ve chosen the side of the police unions. Even though their main support came from people in these respective communities being victimized. People have been going to City Hall and done everything that you’re supposed to do and that’s been ignored. So when that happens, you have to start hitting people where it hurts. You’ve got to let them know that this will not be business as usual. You will understand when you come to the Bay Area that your consciousness will be pierced, that this is not the tourist spot that’s all hunky dory, and that’s playing out.

The other thing is that, people are very aware that 95 percent of the people who are playing in the Super Bowl are people in the peer groups of the folks who have been demonstrating. They are black and brown men. They are black, Latino, Samoan, Tongan, Pacific Islanders. All that. So many of them know what it’s like to be profiled. So many of these football players themselves know that if they’re not recognized, they could easily be rounded up and smashed on just as quickly as their fans who come from those same communities. Just look at the racial hostility that’s been directed toward Cam Newton.

What about police militarization? What are you seeing?

If you went over to Super Bowl City the other day, you would’ve seen the militarization in full swing, as they were literally escorting elders in the community who were protesting and letting people know and preventing them from walking from one place to another, which they have a legal right to do because they were on the sidewalk. But they were not allowed into Super Bowl City, which is free and open to the public. And these are San Francisco residents.

At the same time that this is happening, you have folks from out of town like a guy I saw from Arkansas who wanted to take a picture with the police loaded up with AR-15s and all sorts of weaponry. So you know it’s a very strange reality to see that San Franciscans are being prevented from going inside Super Bowl City, are being profiled and harassed, while out-of-towners are taking selfies with police who are militarized. That’s what’s going on now in this area.

Describe what a militarized cop in Super Bowl week looks like.

First you’re talking about snipers on the roof of all of the buildings. You also have a very large police presence, so that if you show up in a group, you might have a hundred cops that will line up, from wall to wall, and follow you along the sidewalk. So it’s like a moving barricade. Then you have folks with these enormous automatic assault rifles, all types of gear: helmets, shades, army fatigues, you know something out of a Star Wars movie. And you see them every 20 to 30 feet. And it’s interesting, because if you talk to people from the hood, who have been on the receiving end of the drug wars, they’re like, “Ugh, it looks like East Oakland,” because they see that all the time. That militarization shows up in their community far too often.

Is it fair to say that San Francisco is starting to feel like an elite place that’s for some and not for others?

It’s not starting to feel that way. For the last several years, you’d feel very unwelcome. It’s not the same city. You look around, you don’t see people that you recognize, the flavor’s gone, old businesses have been moved out. And you have a new type of person that comes there that is very hostile to what was. They don’t understand the multiculturalism, they don’t understand the artistic community, they don’t understand the politics. Those in the tech world, who have always wanted a whiter, and more affluent, San Francisco, are seeing their dreams come true. And a lot of that falls on the feet of people like Ed Lee, who have pretty much sold the city out.

Would you describe Bay Area residents as “unwilling hosts”?

There are a lot of people that are football fans. There are a lot of people that are happy to see the NFL Experience and Super Bowl City. So I don’t want to make it seem like everybody is like that. But there’s a sizable population of people that are looking at these contradictions and see that even if they go to Super Bowl City, 99 percent of them will not be going to the Super Bowl because they can’t afford the tickets, even if it’s in their backyard. They won’t be going to the numerous parties that require you to have some sort of Super Bowl credential to see your favorite artists who are now all up in here. You know, many of the DJs aren’t even working. Everyone’s been flown in. But I think it’s been a situation where you have two or three parallel worlds existing at once. So you have an elite that are like drinking champagne and eating caviar like a scene out of Hunger Games, standing right alongside people who have been smashed on economically and socially, who are sitting there trying to make sense out of what has just hit them.

Final thoughts? What do they not know about the Bay that you want them to know?

Oh yes. Fiftieth anniversary of the Black Panthers is this year, in the Bay Area. It’s also Super Bowl 50. Cam Newton, who plays for the Panthers, whose colors are the same as the Black Panthers. So there’s that. And as a die-hard Raider fan, I will tip my hat to the Denver Broncos and thank them profusely for sending Tom Brady home. But with that being said, there will be no celebrating, no toasting; no dancing in the streets and no support whatsoever for the Denver Broncos. That is the Raider Nation in me speaking forthrightly and emphatically. We will put our weight behind Cam Newton as he will bring in the 50th anniversary and celebration of the Black Panthers by winning and symbolize what this year will unfold. So, what do they need to know? This is Raider Nation, still. So, tuck your jerseys in, turn ’em inside out, and respect the soil on which you walk. That’s what people from these other places need to know.