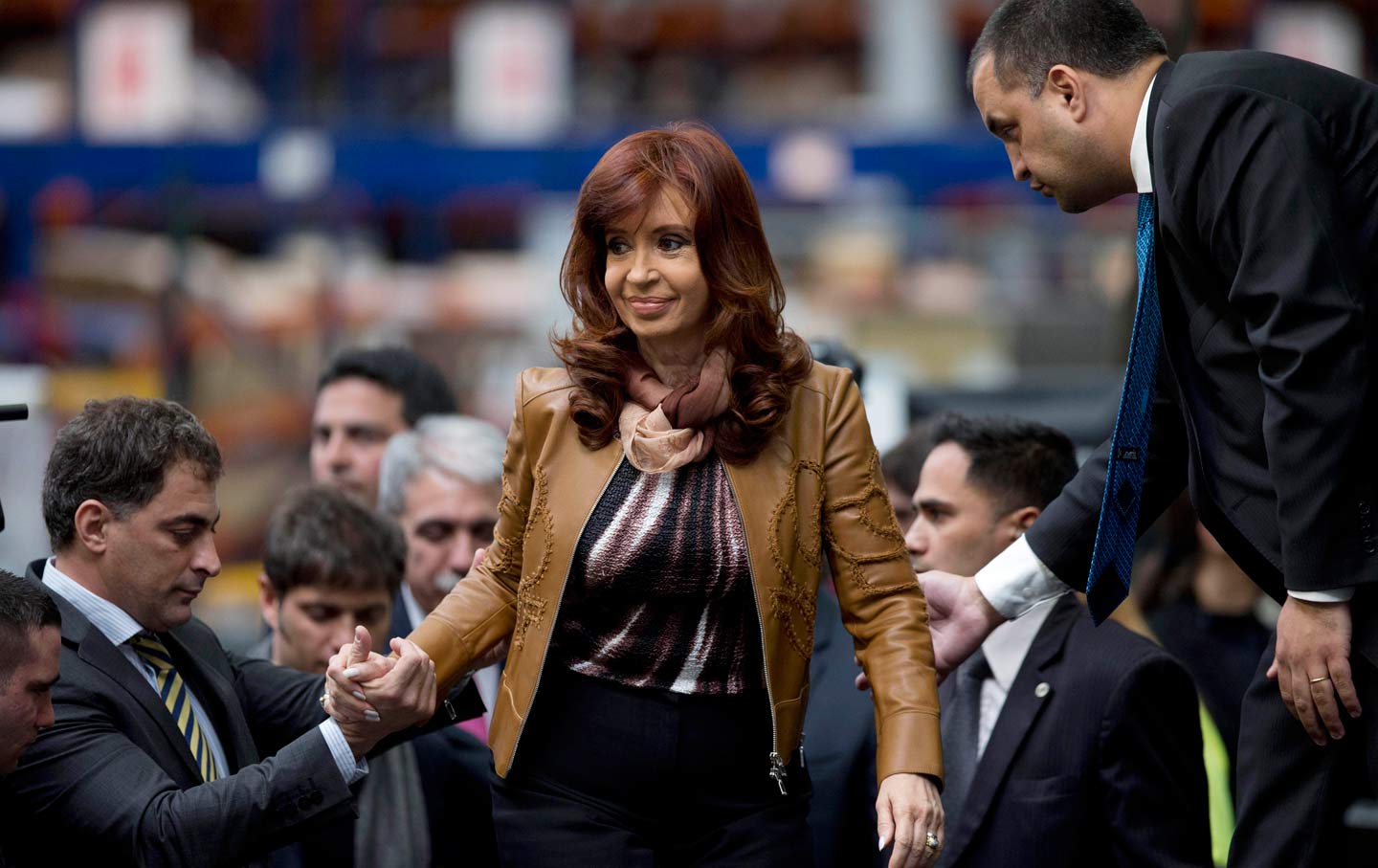 President Cristina Fernández arrives for the presentation of a new line of products at a L'Oreal cosmetics factory in Buenos Aires, Argentina, on October 14, 2015. (AP Photo / Natacha Pisarenko)

Over the last few years, as Argentina has struggled with a sagging economy and its share of political crisis, opinion and policy makers in the English-speaking world have tended to treat its president, Cristina Fernández de Kirchner, as a hot mess, the Paula Abdul of Latin American politics. Secretary of State Hillary Clinton inquired about her mental health (as revealed in a WikiLeaked cable), and The Economist called her presidency a “psychodrama.” The Economist has devoted so much ink to pathologizing Fernández that it has created a new genre: stalking as political commentary. Anonymously written articles (as per the magazine’s house style) describe the Argentine president as a control freak whose “need to control extends to her image” (unlike, say, every other major politician in the Western Hemisphere), cattily noting that “she never appears in public without looking glammed up.” Peronism, of which Fernández is the standard bearer, is less about “ideas,” the magazine says, than a “set of political emotions.”

Just last year, Fernández, who survived brain surgery in 2013, was being written off as an unpopular lame duck. “Her approval-rating languishes at 30%”! Her economic populism is ruinous! She picked a fight with London over the Falklands to divert attention away from her failures! She had a historic naval ship seized by creditors in Ghana! She killed Alberto Nisman! “The Fairy Tale” is ending for “Argentina’s new Evita”! She “lashes out” against critics! She appointed a Marxist Keynesian, or a Keynesian Marxist, as minister of the economy! She’s “out of touch with reality”! She’s “destroying the Argentinian economy”!

Argentina’s economy has been tightening since 2010, largely the result of lowered commodity prices. And Fernández’s clumsy handling of the death of prosecutor Alberto Nisman last January sparked widespread protests. But her popularity over the last year has gradually increased, today reaching “unheard of levels for a president in her final term.” More importantly, her handpicked successor, Daniel Scioli–governor of the province of Buenos Aires–is predicted to win the presidency, either in this Sunday’s first-round vote or in a run-off. (To win on Sunday, Scioli will have to garner either 45 percent of the vote or 40 percent with a 10 point margin; if not, a second round takes place on November 22.)

Those emotional Argentines! If only they could index their feelings to the slumping price of soy, rather than their operatic nostalgia for Evita, they would understand that the rational choice this weekend would be Mauricio Macri, a conservative businessman and current mayor of Buenos Aires who, according to the Argentine economist Roberto Lampa, embodies “the most obtuse neoliberal orthodoxy of the 90s.” China is in crisis, damn it, and Argentines are voting like it is 2002.

There is no doubt that the Latin American left is in crisis, for many different reasons, some self-inflicted, others more structural. But it still wins at the polls because, compared with the disastrous Washington-backed economic policies of the 1990s, this generation’s governing left has managed to improve the material, everyday existence of many, many people.

Argentines have long called the 1980s the “lost decade” (“la década perdida”), but that applies as well to the 1990s, when neoliberals put the whole country (along with much of the rest of Latin America) out for bid, driving the nation into an economic whirlwind that was biblical in its proportions. More recently, Argentines are calling the 12 years of Kirchnerism–eight presided over by Fernández and four by her predecessor and late husband, Néstor Kirchner–the “la década ganada” (the “won decade”), a period that witnessed the institutionalization of enormously popular social policies. Just as anti-Chavistas in Venezuela have to campaign promising to be better Chavistas than the Chavistas (that is, they promise to expand and better administer the social-welfare programs Chávez’s government put into place), in Argentina, according to Jennifer Adair, a historian of Argentina, “every single candidate has had to contend with the ongoing popularity of Cristina and the policies of this past decade. The most dramatic example of this has been in the campaign of Macri, who recently gave a speech that one-by-one listed off the achievements of the Kirchner years, vowing that his national government would continue them.”

These policies include an impressive array of new redistributionist programs, including a “universal payment per child” (“asignación universal por hijo,” best thought of as a basic, minimum income tied to size of family household); protection for domestic workers; pushing back against the IMF and the hedge funds; re-nationalization, including of energy production and of Aerolíneas Argentinas; legalization of up to 2 million migrants, in what might be the world’s most humane border policy; prosecution of military officers involved in human-rights abuses during the dictatorship; legalizing same-sex marriage; lowering of the voting age from 18 to 16; Fútbol Para Todos (Soccer for All, the free, live TV broadcast of soccer matches). There’s low unemployment and steady public investment in public works and infrastructure, though inflation remains a problem.

Many of these achievements were indeed made possible by the commodities boom, as The Economist never ceases to point out. But, as the historian Ernesto Semán says, when commodity prices declined and the peso began to lose its value, the government neither turned to the right (as Juan Perón himself did in 1949) nor enacted knee-jerk austerity. Instead, it struggled to figure out ways to maintain, and even expand, its accomplishments. Fernández stumbled, particularly in her early handling of the Nisman crisis. Enemies, especially in the corporate and supranational press, went on the offensive. Fernández’s “rhetoric became repetitive” and, to some, tiresome.

But after eight years in office–and 12 years of Kirchnerismo–her popularity, and that of her policies, is undeniable. Contrary to what was last year a nearly universally held consensus, she hasn’t capitulated to the vulture funds who have been circling the country since her husband’s death in 2010. Argentina returned to democratic rule in the early 1980s, and every single one of her presidential predecessors save her husband, Néstor, left office either early or in disgrace. In contrast, Fernández is not only leaving beloved, her preferred candidate is set to succeed her.

But that fact might be what undoes her legacy. Many supporters of Fernández do not trust Scioli. Semán describes him as a “terrible governor of Buenos Aires province with bad ratings for most of his administration.” Scioli is running on Fernández’s and Kirchner’s accomplishments, but Google his name, along with the word “pragmatic,” and you’ll be taken to scores of articles in places like The Economist, Barron’s, Foreign Policy, and so on predicting that he will be his “own man.” In this case, pragmatism means only one thing: He’ll break with Kirchnerism, align with Washington, and make peace with global markets. This would include, among other things, deregulation, giving in to the hedge funds, and liberalizing the currency, with a further devalued peso making austerity inevitable. Semán also points out that Scioli is significantly more socially conservative than Fernández, on issues such as gay rights, crime, and abortion.

In Argentina, as in Venezuela and Brazil, Latin America’s new left has outlasted its first generation of leaders. We’ll see if it can survive their successors.

Editor’s note: The passage referring to the “lost decade” has been adjusted to reflect the fact that it’s used by Argentines to describe the 1980s rather than the ’90s.