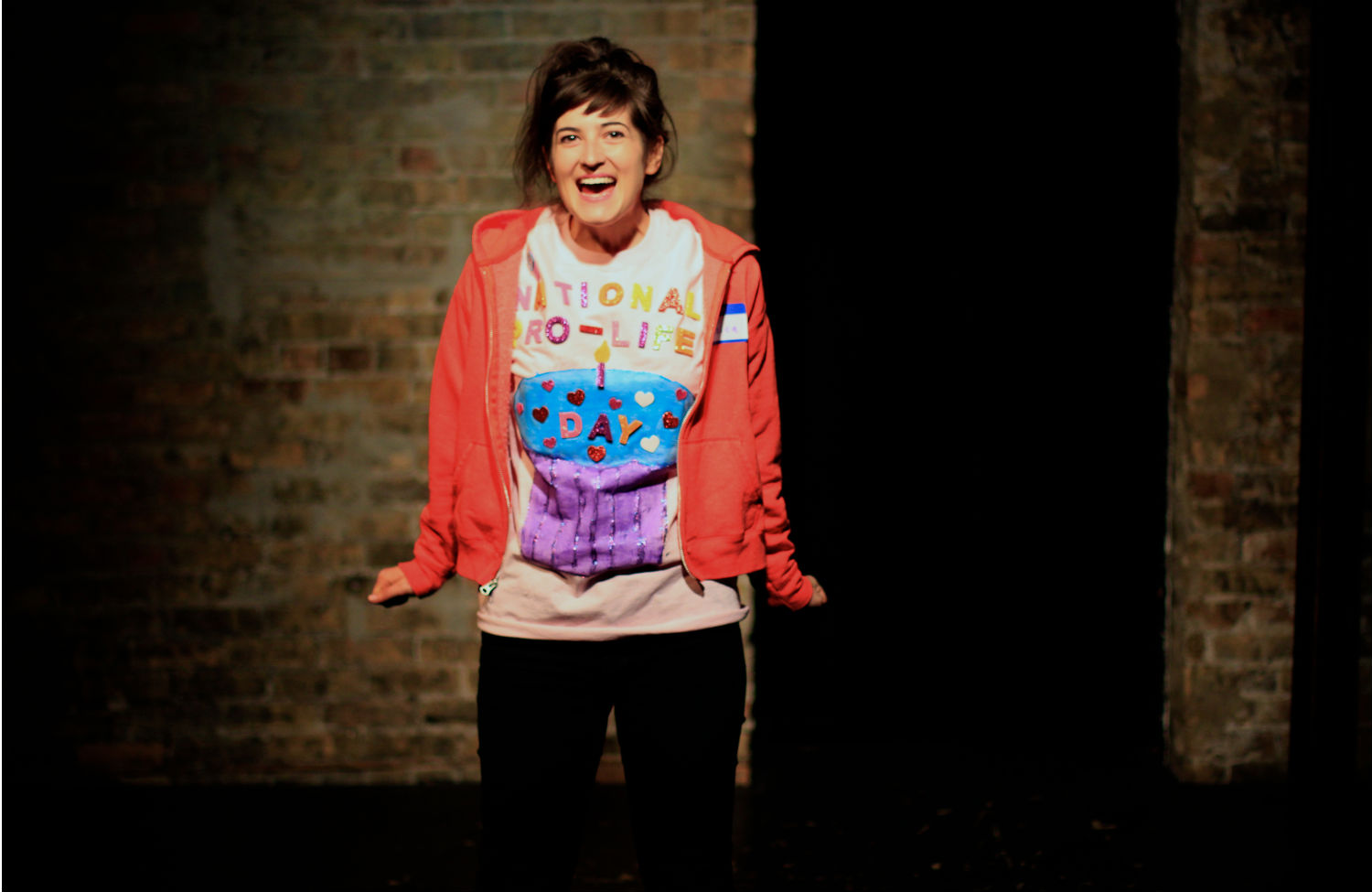 The anti-choice movement is up in arms over my play, MOM BABY GOD, and I have a simple message for them: Bring it on. We’re not backing down.

Based on two years of immersive undercover research on the anti-choice movement, MOM BABY GOD explores the resurgent attack on reproductive rights and, especially, the student arm of the anti-choice movement. As firm believers that live theater can be an important tool for social change, the MOM BABY GOD team (myself, director Emma Weinstein and designer and production manager Allison Smartt), decided to take the show on tour across the country this fall to engage audiences in urgent conversations about the escalating attack on reproductive freedoms.

Little did we know, while we were on tour performing for enthusiastic crowds, Students for Life of America was busy plotting a smear campaign against the show. In an article in National Review attacking the show, Students for Life President Kristan Hawkins admitted that she sent a male Students for Life representative undercover to our sold-out New York City premiere, wearing state-of-the-art spy glasses to illegally film the show. Hawkins now claims that Students for Life won’t release the footage because it is “too vulgar to release to the general public.”

The show follows Jessica Beth Giffords, a 15-year-old girl who is equal parts Justin Bieber superfan and aspiring pro-life celebrity, as she attends the Students for Life of America Conference. Throughout the hour-long solo performance, Jessica interacts with six other characters based on real-life pro-life activists, from crisis pregnancy center directors to ministers to self-described “pro-life feminists”. We follow her as she absorbs the misinformation in an abstinence-only “sexual purity” workshop and struggles to contain her crush on a popular and flirtatious Christian boy who sports a purity ring. This sexual struggle and the notion that girls and women can embody sexual desire outside of the context of heterosexual marriage is precisely what Students for Life finds so vulgar.

I would argue that the only “vulgarity” in MOM BABY GOD is the very right-wing politics that Students for Life champions. And far from being an embellished send-up of the right-wing, I found no need in MOM BABY GOD to exaggerate the tactics and rhetoric I encountered within the anti-choice movement.

Since the 2011 congressional attempt to defund Planned Parenthood, I have been immersing myself in the anti-choice movement. Inspired by the NARAL investigations of crisis pregnancy centers and by theater that puts real people’s voices and stories onstage, I began to craft a solo show that asked the questions, “How, forty years after Roe v. Wade, have we lost so much ground?” And, of perhaps more importance, “What are we going to do to fight back?”

Going undercover in the anti-choice movement was the acting challenge of a lifetime. While I never assumed a fake identity, I bit my tongue too many times to count. At the Students for Life of America Conference, I interviewed a group of teenage boys who told me how hard it is to remain “sexually pure,” especially with so many cute, like-minded pro-life girls around. I got beers with “pro-life feminists” who assured me that sex is “way better” when you wait for your hot Christian husband. And I listened patiently, if with difficulty, as a young man earnestly explained the “science” behind why, in his words, “sex between two women doesn’t work.”

At a crisis pregnancy center fundraiser, I participated in a painful rendition of “Happy Birthday” to the babies “saved” by the CPC. And I had to contain my rage when, at the Youth Rally for Life, a prominent anti-choice activist referred to the crowd as “survivors” of a “Holocaust against the unborn,” co-opting the language of anti-rape activists and equating abortion clinics with Nazi death camps in the same breath.

This may be why Kristan Hawkins and anti-choice activists like her seem so afraid of MOM BABY GOD: It holds a mirror up to the anti-choice movement and exposes the sexist and sexually repressive nature of their politics. Even more threatening, MOM BABY GOD inspires audiences to fight back.

In every city, audience members—from young women to my partner’s 52-year-old dad—signed up to become clinic escorts at area clinics. In our post-show discussions, clinic staff spoke about the scare tactics anti-choice activists use to harass women and staff members alike. Young queer people talked about how homophobic abstinence-only education prevented them from coming out.

Most significantly, people wanted to know what we could do to build a movement to counter anti-choice politics and fight for reproductive justice. In every discussion, I’ve made the same point: the first lesson we can learn from the anti-choice movement is that they have gained so much ground because they are the ones in the streets shaping public opinion. Just like the abortion rights activists of the 1970s who held public speak-outs to break the silence around abortion, we need to be in the streets today, shaping the conversation and changing hearts and minds.

The day after the National Review article was published, MOM BABY GOD opened booking for our West Coast Spring 2014 tour. Come see what the right-wing is so afraid of. Bring us to your campus and community. And join us as we take the anti-choice movement head-on and fight for reproductive justice for all.

Jessica Valenti explains why some companies are refusing to include birth control coverage in their insurance plans.