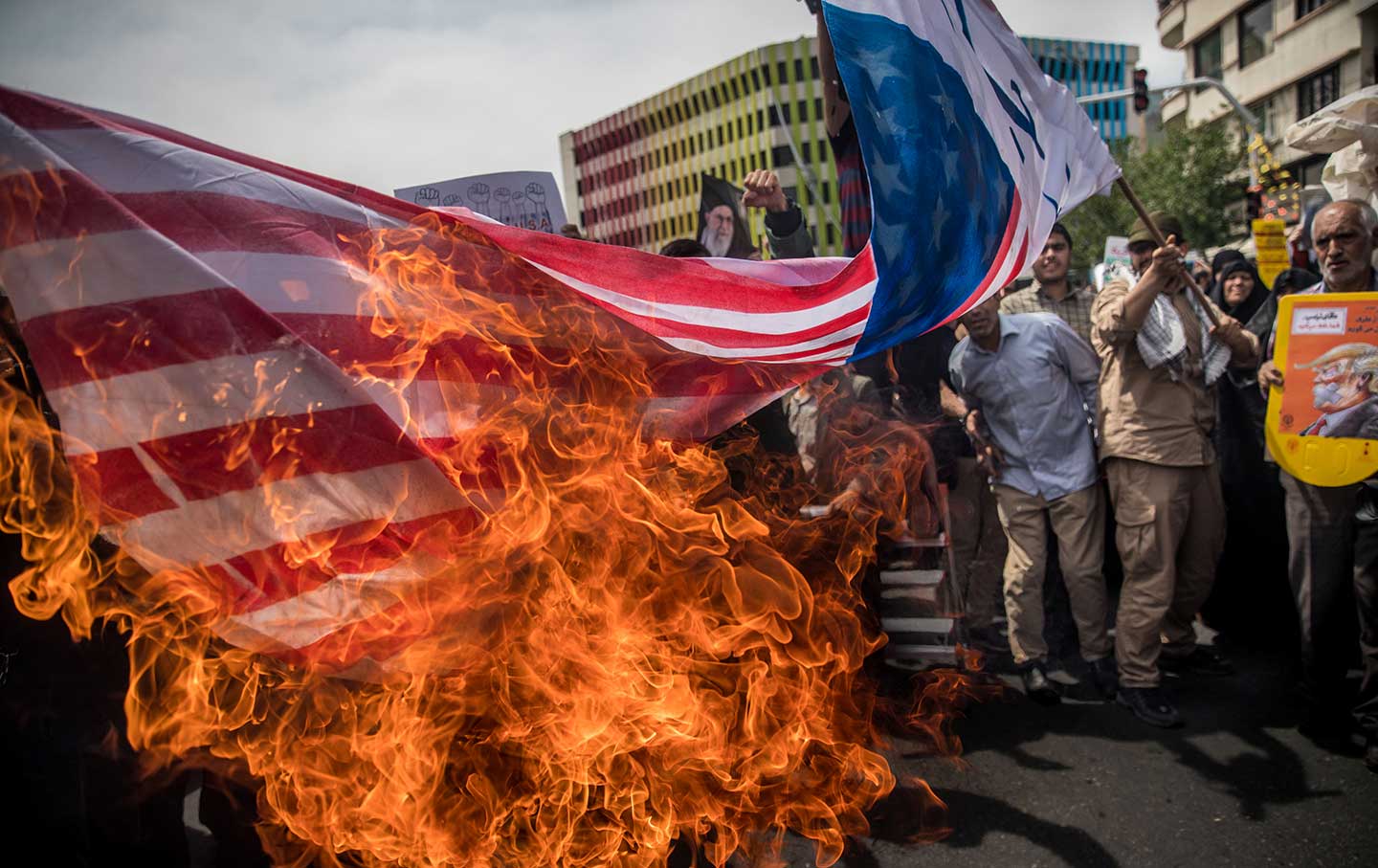 Secretary of State Mike Pompeo’s speech on May 21 only reinforced what was already known about Donald Trump’s strategy for Iran: Either the president is ratcheting up the pressure on Tehran to get a “better deal,” which is the official story and the gist of Pompeo’s message, or he is merely pretending to be interested in new negotiations, while putting into place the building blocks for a military assault on Iran. Yet even if Trump genuinely seeks new negotiations, he is more likely to end up in a war, because the very premise of Pompeo’s speech is false. That’s because more pressure on Iran would not have secured a better nuclear deal in 2015—it would only have led to war, or to a nuclear Iran.1

A persistent mythology on the right insists that President Obama botched his own Iran strategy because he lacked the backbone to fully squeeze Tehran. Obama had assembled an impressive sanctions regime that was doing significant damage to Iran’s economy. With the value of its currency cut in half, its oil sales reduced to a trickle, and its GDP contracting by roughly 34 percent, Iran was on its knees, this narrative claims. All Obama had to do was to tighten the screws a bit more and give it another six months, and the mullahs in Tehran would have surrendered: No more Iranian nuclear program, no more challenges to US primacy in the Middle East, and no more defiance of Israel.2

But, alas, Obama opted for compromise instead of forcing a capitulation. Rather than squeeze the country until it broke, he offered to lift the sanctions if Iran agreed to restrict its nuclear program. Tehran smelled Obama’s weakness, this mythology claims, and happily accepted the undeserved lifeline. The result was the 2015 nuclear agreement, officially known as the Joint Comprehensive Plan of Action (JCPOA), which granted Iran relief from nuclear-related sanctions in exchange for a large reduction in its stockpile of enriched uranium and its number of centrifuges, as well as periodic intrusive inspections of every element of its nuclear-fuel cycle by the International Atomic Energy Agency. Iran would still be able to enrich uranium, but only to 3.67 percent—well below what’s needed to produce a nuclear weapon.3

Now Trump is seeking to reverse this alleged mistake by reimposing sanctions. Then, once the moment is right, he will go back to the negotiating table—this time not to negotiate, however, but to accept Iran’s capitulation. It all sounds so wonderful, simple, and tidy. What could possibly go wrong?4

Everything. Indeed, the very premise of the right-wing narrative is wrong: Iran was not about to capitulate, and US leverage over the country was waning—not growing. When Obama first sought to cripple Iran’s economy to force Tehran to submit, Iran responded by doubling down on its nuclear program. When Obama took office in 2009, Iran operated roughly 8,000 centrifuges; by 2013, it had added another 14,000. Iran had also increased its stockpile of low-enriched uranium eightfold and significantly advanced its nuclear know-how, all of which provided Tehran with counter-leverage. In January 2012, the United States estimated that Iran’s breakout capacity—the time it would take to have enough material for one nuclear bomb—was 12 months. By 2013, that time had shrunk to eight to 12 weeks.5

As a result, Iran was outpacing the United States in building leverage. By early 2013, Obama realized that if nothing changed, Washington would soon have only two options: Either accept Iran as a de facto nuclear power, or go to war. Iran would be able to achieve a near-zero breakout capacity before its economy collapsed, so letting the sanctions bite for another six months would only increase the likelihood of war—not the likelihood of Iran’s surrender.6

This is why, in March 2013, Obama did the unthinkable. In secret negotiations, he broke with past US policy and offered to accept, given sufficient transparency and limitations, the enrichment of uranium on Iranian soil. This was Iran’s bottom line: It was willing to endure almost any economic hardship before it gave up enrichment. (Most nations, including some involved in the negotiations leading up to the JCPOA, accept Iran’s right to enrich uranium under the Non-Proliferation Treaty, to which it is a signatory, but this had been a sticking point for US and European Union negotiators.)7

Obama knew all along that no nuclear deal would be possible unless he conceded this point. But the plan was to play the enrichment card at the end of the negotiations, since it was the United States’ most valuable concession. Instead, Obama had to play it at the outset. It was this move, not the sanctions policy, that ultimately elicited Iranian flexibility and paved the way for a nuclear deal.8

Yet the Obama administration also planted the seeds of the right-wing narrative that Trump is now using. Recognizing that domestic political opposition to a deal with Iran might shoot through the roof if the administration admitted the limits of its sanctions policy—as well as the reality that Tehran had outpaced Washington in the leverage department—the Obama team insisted that sanctions had brought Iran to the table.9

It was a formulation that falsely credited sanctions, rather than the US concession on enrichment, for the diplomatic breakthrough and gave the impression that the United States had been operating from a position of strength. In fact, the full details of the secret negotiations with Iran, including the intricacies around the enrichment concession, first came to light through the publication of my book Losing an Enemy: Obama, Iran, and the Triumph of Diplomacy.10

By using language that insisted the United States was operating from a position of overwhelming strength, the Obama administration helped to give birth to a persistent question: If the sanctions were so successful in forcing Iran to the negotiating table, why didn’t the administration continue the sanctions until Iran capitulated fully? In response, Obama had to gently walk back his claims. “Iran is not going to simply dismantle its program because we demand it to do so,” he admitted on April 2, 2015. “That’s not how the world works, and that’s not what history shows us. Iran has shown no willingness to eliminate those aspects of their program that they maintain are for peaceful purposes, even in the face of unprecedented sanctions.”11

Other officials, speaking privately, put it more bluntly. “The Iranians simply won’t capitulate,” even if faced with war, a senior Obama official said during a closed briefing at the White House that I attended in July 2015. “Because they’re Iranians,” he added after a brief pause.12 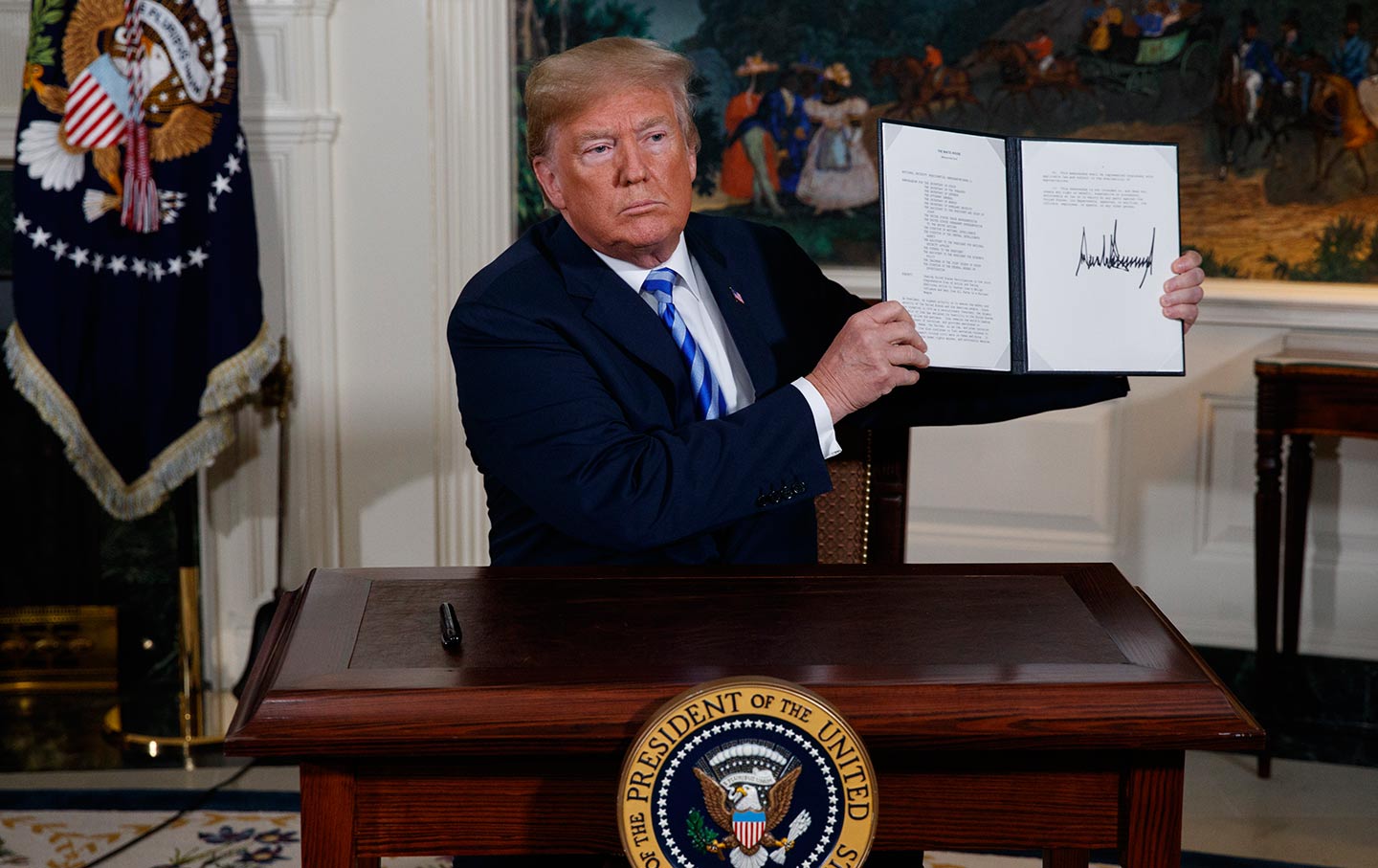 But the damage had already been done, and the right-wing mythology started to take hold. Today, it constitutes the basis for Pompeo’s speech and Trump’s Plan B. But even if the Trump team manages to rebuild the sanctions coalition against Iran—which remains unlikely, given the strong support for the JCPOA by the European Union as well as by Russia and China, all signatories to the agreement—it is difficult to imagine Trump succeeding where Obama failed: That is, by overwhelming Iran with pressure that would force it to surrender rather than expand its nuclear program.13

When Obama realized the limits of sanctions and pressure, he avoided war by going to the negotiating table. There’s little indication that Trump is capable of the same courage and prudence. Indeed, with Mike Pompeo as secretary of state and John Bolton as national-security adviser—both anti-Iran hard-liners—Trump’s strategy seems designed to fail. Instead of a Plan B aimed at securing Iran’s capitulation, it appears designed to pave the way for Plan C: War. Trita Parsi14