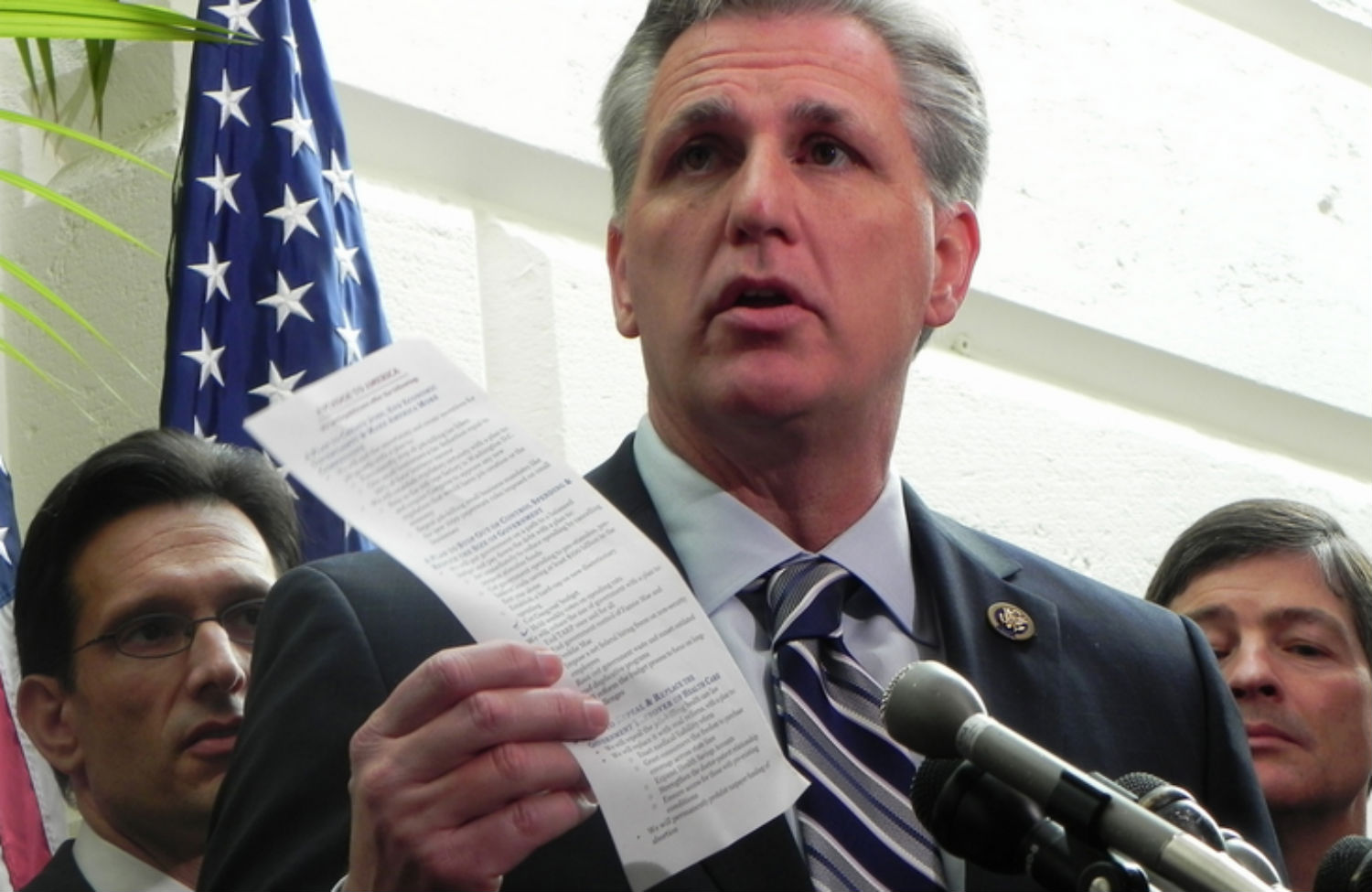 After 2014 passes, Eric Cantor will no longer represent the 7th Congressional district in Virginia. But after July passes, he will also no longer serve as majority leader of the House of Representatives—a crucial position, and one in which he has used to considerably influence national policy.

As Chris Hayes pointed out last night on All In, Cantor was the chief advocate for driving a 2011 debt-ceiling showdown and the severe austerity measures that resulted. That’s not to say it was his sole prerogative; Cantor was advocating on behalf of a coalition of far-right Tea Party lawmakers who desperately wanted a showdown with the White House. But inside the leadership offices on Capitol Hill, it was Cantor who made sure that Speaker John Boehner heard and reacted to their concerns. As the number-two Republican in the House, he served as a conservative sword of Damocles over Boehner’s head: cross the conservatives too much, and they just might replace Boehner as Speaker with Cantor.

In addition, the majority leader’s considerable influence over the House gives that person unique power to make sure his or her top donors received what they want. In Cantor’s case, it meant Wall Street had an even stronger voice on Capitol Hill.

As of Thursday, only two candidates have emerged to take Cantor’s place: Representatives Kevin McCarthy and Pete Sessions. It’s useful to take a look at the political backgrounds and pet issues of both to see what direction the House might be headed post-Cantor.

Representative Kevin McCarthy
District: California’s 23rd
In Congress since: 2007
Biggest Contributors: Pharmaceutical and Health Product PACs contributed the most to his campaign committee; for individual donations, a plurality were from the securities and investment industry.

McCarthy is to some extent an empty vessel; he rose very quickly through California state politics. After stints with the California Young Republicans in the 1990s, he went on to work for Representative Bill Thomas, a congressional powerhouse who chaired the House Ways and Means Committee. Thomas was a titan for the pharmaceutical industry and helped get the Medicare Part D drug benefit passed; the ties McCarthy developed during this time are likely why he maintains high financial support from drug companies.

McCarthy left that office to run for California State Assembly, and won a seat in 2002. He quickly became assembly Republican leader, a theme throughout his career—he seems to excel most at internal politicking and obtaining caucus leadership posts. As Ryan Grim and Ashley Alman wrote at The Huffington Post, “There isn’t much to dislike about McCarthy, unless you’re annoyed with empty ambition.”

McCarthy is almost surely Boehner’s choice for the job, though he hasn’t said so publicly. He’s a moderate (by, of course, the standards of the increasingly polarized and extreme House GOP caucus.) In fact, he’s arguably more moderate than Cantor on the key issue of immigration—he said early this year that immigration reform should include legal status for the undocumented. All in all, McCarthy is unlikely to lead the Tea Party vanguard in the House. In fact, he’ll probably blunt its impact.

Biggest Contributors: Health Professionals PACs contributed the most to his campaign committee; for individual donations, a large plurality were either ideological donors or people in the Securities and Investment industry.

McCarthy is, quite clearly, not the preferred choice of the more conservative House GOP members. Their hopes initially rested on Representative Jeb Hensarling, a Tea Party favorite and chairman of the powerful and extremely lucrative, from a fundraising standpoint, House Financial Services Committee. Perhaps because he was unwilling to give up that plum spot, Hensarling elected not to run for majority leader and publicly tossed his support to Sessions. Other hardcore conservatives like Representatives Tom Price and Jim Jordan also chose not to run.

So it’s looking, for now, like a two-man race between McCarthy and Sessions. Some conservatives remain unsatisfied—Representative Steve King, for example, said Thursday he still wants a “staunch conservative [and] anti-amnesty candidate” to step up, but so far, nobody else has.

Sessions conservative credentials, though, are hardly in doubt. During the government shutdown last year, a member of the House was reported to have told President Obama, to his face, “I cannot stand to even look at you.” Several people in the meeting later identified Sessions as the speaker, though he denied it.

In early 2009, as Obama settled into the White House, Sessions favorably compared the coming GOP rebellion to the tactics of the Taliban. “Insurgency, we understand perhaps a little bit more because of the Taliban,” Mr. Sessions said in an interview with Hotline. “And that is that they went about systematically understanding how to disrupt and change a person’s entire processes.” (Aides immediately stressed Sessions wasn’t really comparing the GOP to the Taliban, just noting there was a blueprint for insurgent tactics out there. This seemed a distinction without much difference.)

Sessions appears to be basing his campaign around a tough anti–immigration reform stance. While GOP members gathered to say goodbye to Cantor on Wednesday in the Capitol, Sessions was busy finding the assembled press cameras and hinting at why he needed to take Cantor’s position. “I think this administration needs to be prodded and reminded that the entire sovereignty of the United States is at risk if we do not secure our border—north, south, east, and west,” Sessions said, as Breitbart News reported. “The things which are occurring at our border must be stopped and must be controlled before we do anything else that encourages people to come here.”

But some hard-right anti-immigration reform activists aren’t totally sold on Sessions. He faced a Sarah Palin–backed primary opponent who repeatedly blasted Sessions for taking an (extremely timid) step in the direction of reform. At a 2013 town hall meeting, he was caught on tape endorsing a guestworker program—though one that would never lead to full citizenship.

Ethical issues might also undo Sessions. He had an uncanny knack for getting himself mixed up in some of the more unseemly scandals of the aughts. He was caught up in the Jack Abramoff scandal when Sessions wrote letters to Bush administration officials asking them not to shut down certain Indian casinos—and then got wads of cash in campaign donations from tribes represented by Abramoff. He also got significant money from disgraced financier Alan Stanford and flew often on his private jet. Vice reported extensively Wednesday on some of the favors Sessions may have done.

But Sessions is no doubt a true believer—hence the large amounts of ideological money he’s received. He also chaired the National Republican Campaign Committee during the 2010 takeover, which burnished his credentials while making many Tea Party members indebted to him for their seats.

It seems, for now, that McCarthy has the race locked up—but then again, everyone said that about Eric Cantor, too.