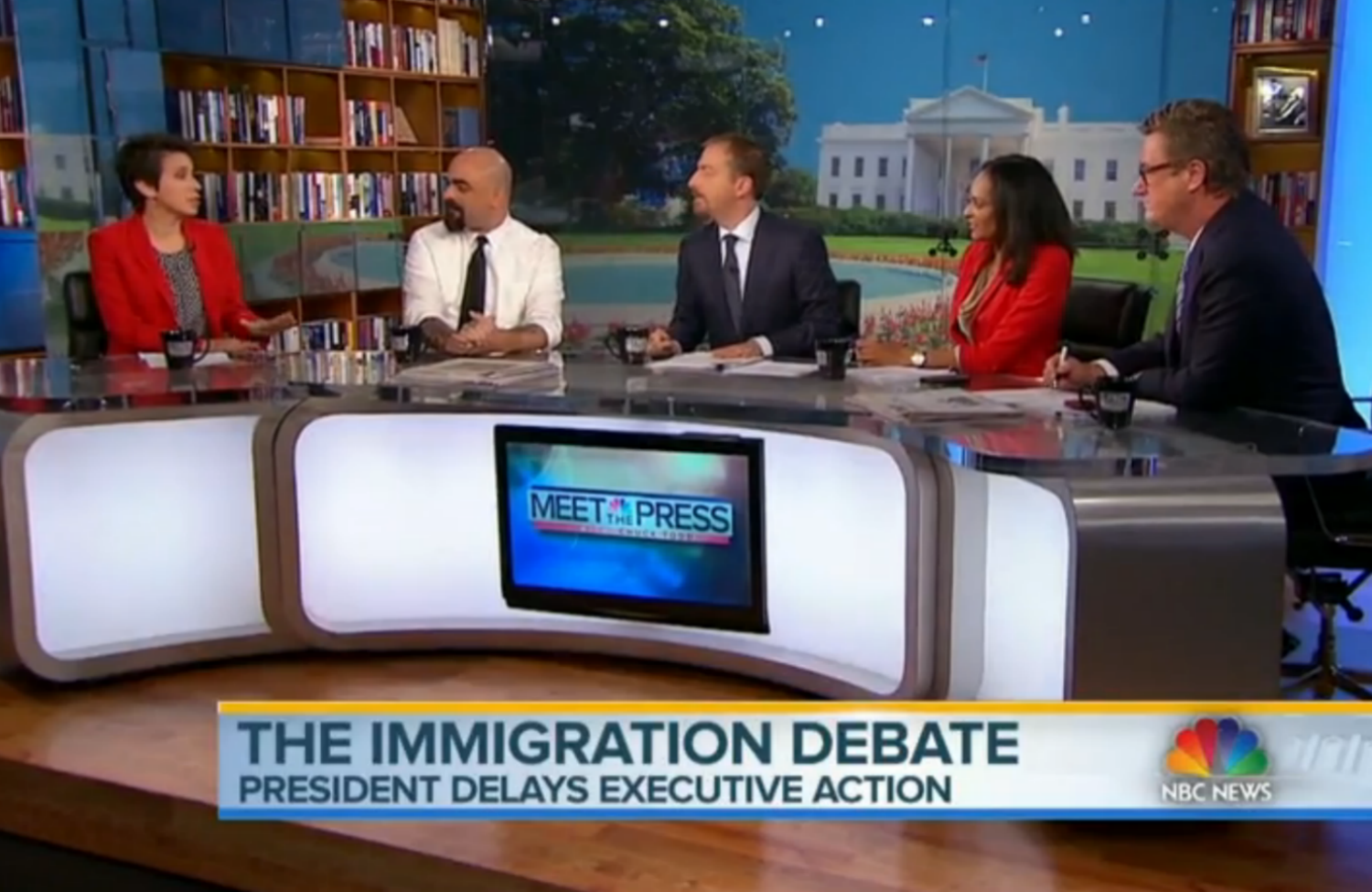 If you want to put your finger on the problem confronting Chuck Todd, who made his much-ballyhooed debut as moderator of NBC’s Meet the Press on Sunday, you don’t have to look much farther than the two “fun new features” introduced on the first show.

Todd said the recurring segment called “Who Needs Washington?” will explore politics beyond the Beltway, which this week meant interviews with mayors of cities that are “going it on their own with little of Washington’s help or dysfunction.” The second new feature is “What everyone in Washington knows but is afraid to say.” This week the thought that dare not speak its insight was “what Hillary Clinton’s really up to.”

But maybe what everyone on Meet the Press is really afraid to say is that Todd’s mission is at best inherently self-contradictory: although his new show desperately wants some outsider cred to boost the ratings, it’s not willing to risk its insider status to do so.

Talking to America’s big-city mayors is hardly new—Sunday shows have always been bringing on local pols who claim to be better at governing than the national leaders. And while the very existence of a Sunday Beltway talk show would seem to hinge on telling you what “everyone in Washington knows” and you don’t, as it turned out, neither Chuck nor his panelists had anything new to say about “what Hillary’s up to.” (And since when was anyone in the media afraid to speculate about that? The only fear you smell is their fear of admitting, “I don’t know.”)

As MTP fell from first to third place during David Gregory’s misbegotten reign, NBC brass realized that something was wrong beyond Gregory, but they weren’t sure what. “The show needs more edge,” NBC News President Deborah Turness recently declared. Format changes, she suggested, will include a panel of journalists questioning guests, as the show did in its earlier, better days. “The one-on-one conversation belongs to a decade ago,” she said. “We need more of a coffeehouse conversation.”

So just how edgy or coffeehouse was yesterday’s show? It stuck to a one-on-one interview, of President Obama, but it usefully tweaked the format so that the panel discussion was interspersed with the interview.

But only one panelist conceivably had “edge,” or his visibly tattooed armed did, anyway: Buzzfeed reporter John Stanton, who’s been a guest on Chris Hayes’s and then Steve Karnaki’s Up—a show that’s edgy enough to not broadcast its need for that quality.

But the other panelists included the usual inside-DC suspects and MSNBC stalwarts: Andrea Mitchell, who has her own MSNBC show and is married to former Fed chair Alan Greenspan; The Washington Post’s Nia-Malika Henderson, who pops up on MSNBC to convey the most conventional wisdom in the most conventional way; and Joe Scarborough, now promoted to an “NBC News senior political analyst.” It’s possible that Joe could bring the edge of his sarcastic annoyance as well as coffeehouse demeanor from Morning Joe. But on Todd’s show, Joe wasn’t allowed to play the alpha male, and he was on his best network TV behavior; he even had only nice things to say about Obama.

Try as he might—and he only might—Todd may not be able to escape the safe blandness endemic to network Sunday shows.

The shadow all the NBC anchors are trying to outgrow is Tim Russert’s, who was MTP host until he unexpectedly died in 2008. Russert had a reputation for “gotcha” journalism, in a good way. He’d use the technology of his era—tapes from the archives—to confront a guest: back then you said that, but now you say this. Some guests were rattled, but the show soon acquired a chummy atmosphere—seasoned pols would lean in and say, “You sure are good with those clips, Tim,” and then chuckle through an analysis of spin. “Meet the talking points,” critic Jay Rosen calls the show.

After all, the hosts and producers didn’t want to alienate the guests they’d need to book down the road. Even more, of course, they didn’t want to alienate the corporate sponsors. Corporations advertised on the Sunday shows to influence policy legislated by the target audience of “thought leaders.” The shows were dominated by companies like GE, Northrup Grumman and Archer Daniels Midland, who helped determine what policies and scandal were not talked about on Sunday shows. Yesterday on MTP, Koch Industries ran its big national ad that says, in so many words, they’re so powerful you’re better off working for them than boycotting them.

The idea is that these corporations are above right/left politics, a delusion the news media helps perpetuate by repeating the false equivalency canard that both political sides are equally guilty of any wrong. This Sunday, Todd kept suggesting that it won’t make any difference if the midterm elections result in a Republican or a Democratic senate majority, because gridlock will rule the day. (Obama gave a decent explanation for why that’s crazy.)

In trying to brand the show and himself, Todd has been repeating his own slogan of sorts: “It’s not politics that people hate, it’s that they hate the politicians that don’t know how to practice the art of it.” That sounds plausible, but it also sounds like a reluctance to examine underlying structural issues to focus instead on the personalities of the moment.

But as Jason Linkins wrote, “A New Host On ‘Meet The Press’ Isn’t Going To Solve Its Problems.” He made a great case for why John Oliver’s Last Week Tonight “beats ‘Meet The Press’ coming and going. The show literally wandered right onto ‘Meet The Press’ Beltway turf and delivered a report [on the nutritional supplement industry] with a sophistication that no Sunday show has pulled off in years.” It wasn’t just the jokes that made it work, but “the show wanted to have a point” and demonstrated a “real respect and genuine concern for their audience, instead of trying to get over by posing as an ‘insider’ operating under a veil of savviness.”

Todd is smart enough to recognize the problem, but to really shake off that toxic insider status, he might consider Jay Rosen’s advice:

I think it would be wise for Chuck Todd to see himself and his colleagues, Washington journalists, as part of the class that has screwed up politics.

And maybe, in taking over “Meet the Press,” he can begin to address some of how that happened.