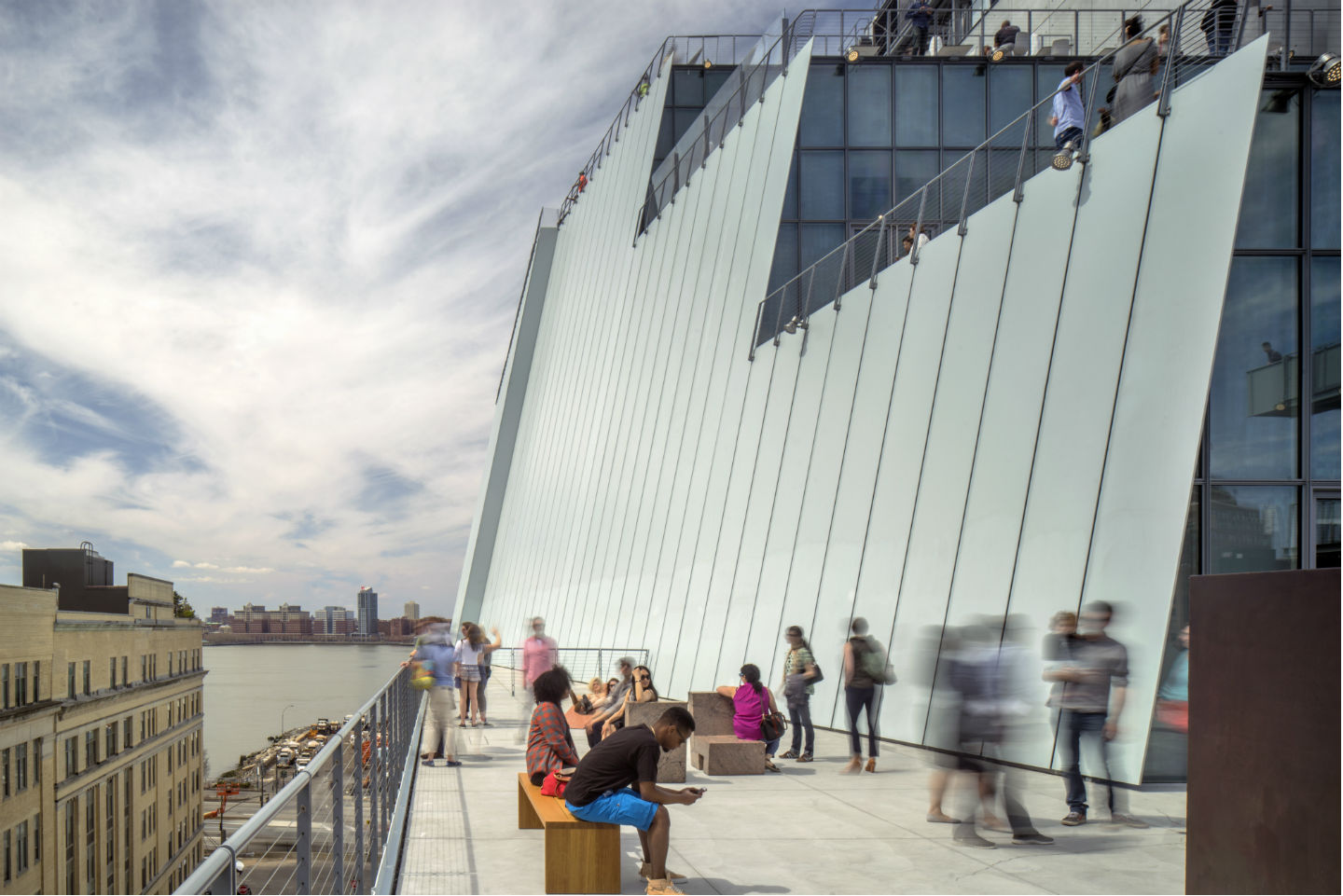 The new building of the Whitney Museum of American Art between the High Line and the Hudson River. (Photograph by Nic Lehoux)

To pomp and protests, the Whitney Museum of American Art has relocated from the Upper East Side to an area that some real-estate geometricians call Chelsea, others the meatpacking district, and still others Greenwich Village. The museum’s own website claims the new building “engages the Whitney directly with the bustling community of artists, galleries, educators, entrepreneurs, and residents” in all three neighborhoods. But surely that’s limiting. “It’s nice to have the art a little bit closer,” NoLITa resident Dakota Fanning told Forbes at the museum’s “opening night party” on Friday. We at Back Issues must have misplaced the invitation, but we’ll try to get over it: For us and the rest of the public (i.e., those with $22 and some time to spare), the Whitney’s new building, designed by Renzo Piano, opens this Friday, May 1.

The Whitney Museum grew out of a private collection maintained by Gertrude Vanderbilt Whitney, a sculptor, patroness, and society dame. When the first location opened in 1931 in a space created by the conversion of three brownstones on West 8th Street, The Nation’s art critic Paul Rosenfeld—one of the most influential tastemakers of his era—reviewed it in his column, focusing more on the collection than on the building.

He wasn’t impressed. “Dismally enough, it appears very possible that only the grace of the gods can prevent the new institution from recoiling upon the prestige of the American art it proposes to enhance.”

The collection, Rosenfeld continued, was “puny and gray. Few forces, few personalities radiate from the walls. One passes yards of uncreative canvases. The impression of American painting left is extremely disaffecting: that of a matter devoid of large life, of individual charm, of eloquence; and provincial and secondary to a degree.”

Not only did the paltry Whitney collection diminish the vitality of American art, Rosenfeld suggested, it might actually serve to stifle what excitement did already exist:

It will be asked what the reasons for one’s fear that the Whitney Museum may prove a boomerang to American art, actually are? The answer is that it is very likely that in pretending to represent American art and actually misrepresenting it the museum may deprive American art of the confidence of the artistic public—at a moment when the prestige rightfully American art’s, and fought for during may years, is on the verge of holding its ground…. At this moment, then, the Whitney Museum plays into the hands of the picture dealers, who batten on the kind of snobbery which sees in all French things symbols of transcendent value, the apparently conclusive proof that American painting is a second-rate affair. The publicity obtained for the museum assures it of a wide influence. It is now the place where the outsider in New York will come to gauge the quality of American painting, and where the Europeans will come to investigate the reality of its claims. And it is scarcely to be supposed that those who do not turn aside to smile will remain to pray. Nor is it to be supposed that the large public will understand the decorativeness of the gesture which offered it this museum. It will see what the President and Al Smith [they had attended its opening] and all the rest have helped to persuade it to see: a large, disinterested, and devoted gift to art and America. For this reason, then, one could almost wish that the Whitney Museum had never opened its pompous doors.

In the mid-1950s the Whitney moved uptown, near the Museum of Modern Art, but it suffered rather than prospered from the comparison suggested by that proximity. Just a decade later the museum picked up and moved again, further uptown, to a new building designed by Marcel Breuer at the corner of 75th Street and Madison Avenue.

This time The Nation covered the museum’s reopening in an architecture review, written by the Hungarian-born architect and critic Ervin Galantay.

“The decision of the Whitney Museum of American Art to erect a new building on Madison Avenue in New York marked its advance from adolescence to manhood among New York’s museums,” Galantay wrote. “Having been thought of for many years as a promising nephew of the brilliant Museum of Modern Art, it now purports to become an independent force and a major component in the city’s pattern of cultural institutions.”

One can’t help but notice that the rhetoric this time around is fairly similar. “Long the odd duck among the Big Four of Manhattan art museums,” Peter Schjeldahl writes in The New Yorker, the Whitney now “takes wing” with “a refurbished sense of mission.” Now, in the new building, the Whitney becomes “a landmark on the cultural and social maps of the city—and on its poetic map, as a site to germinate memories.”

“The building now stands complete, a dignified, if somewhat odd fellow, quiet, urbane, dark and virile,” Galantay wrote in The Nation in 1966. Yet, like Michael Kimmelman of The New York Times in 2015—who says the Renzo Piano building “isn’t a masterpiece”—Galantay called Breuer’s box “only partly successful.”

“The major weakness of the present design may be that the building is patterned for a finite size; growth has not been considered,” Galantay wrote—inadvertently offering a précis for one justification of the Whitney’s move back downtown five decades later.

Galantay considered the Whitney’s options for expansion and relayed the frustration that neither the architect nor the museum has any control over what might happen to neighboring properties. He suggested “some form of legislation” to allow places like museums to exercise veto power over development in their immediate vicinities. “This would serve the aesthetic welfare of the community,” the architect wrote, “but the guarantee of orderly development would also, I am sure, enhance surrounding land values.”

The new Whitney, at the foot of the High Line, probably won’t need any help with that.