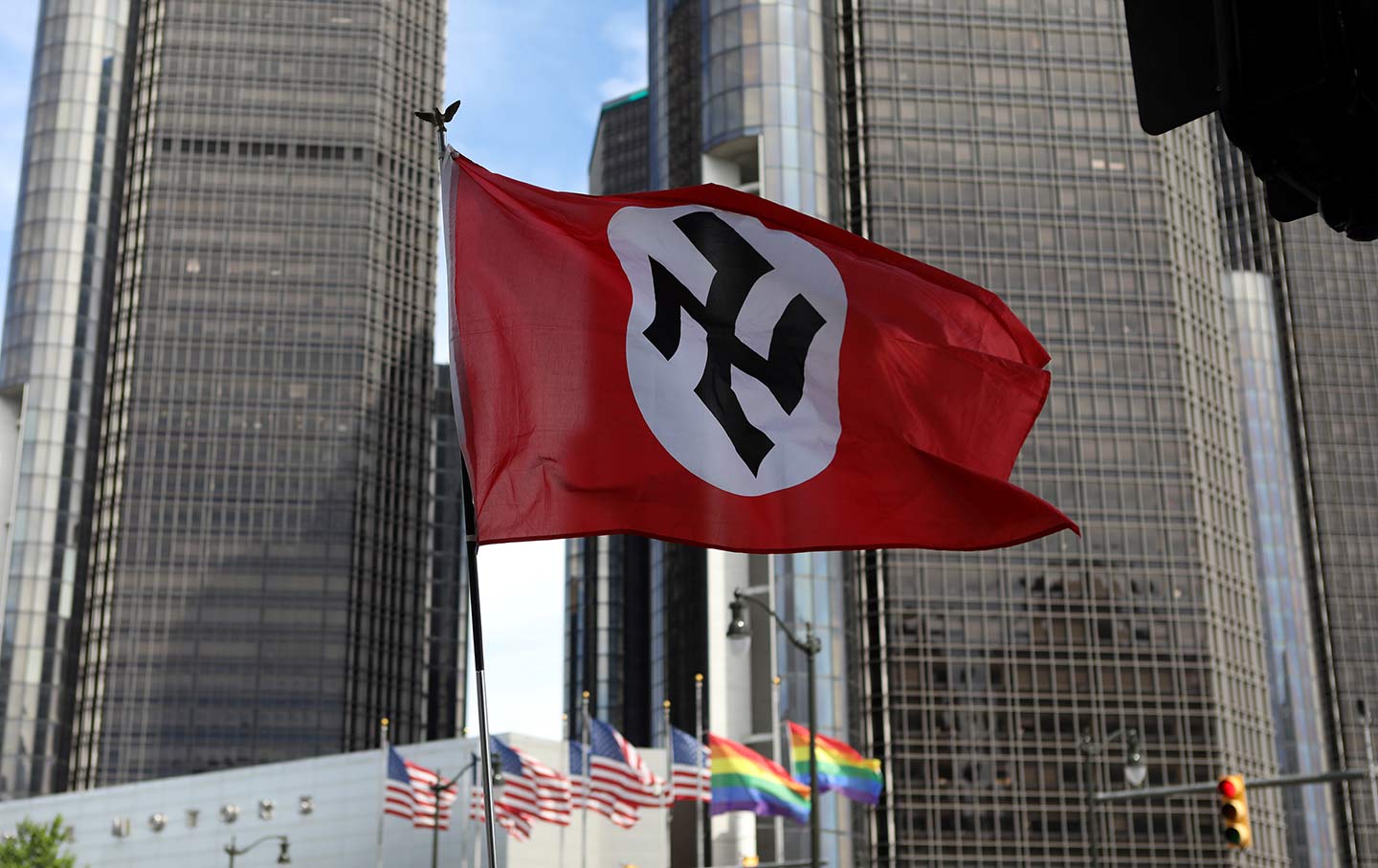 Kathleen Belew teaches history at the University of Chicago and is the author of Bring the War Home: The White Power Movement in Paramilitary America. This interview has been edited and condensed.

Jon Wiener: El Paso, Charleston, Charlottesville: All the attackers we’re talking about have been described as loners. You say they are all connected. How?

Kathleen Belew: We’re talking here about the White Power movement, a coalition that includes Klan groups, neo-Nazi groups, skinheads, and other activists. They came together in a movement in the late 1970s in the aftermath of the Vietnam War. One of their key tactics was a thing called leaderless resistance—a few people work in a cell without direct communication with other cells and without direct orders from leadership. This strategy was implemented to stymie infiltration efforts and prosecution. But there’s been a much larger and more damaging legacy of the strategy of leaderless resistance: It has effectively erased this entire movement as a movement, so what we see instead are a series of stories about lone wolf attackers, acts of violence that are inexplicable and unrelated to each other. We get narratives about mental illness or personal animus, and we miss the very political, very deliberate meaning of this violence, which comes from understanding it as interconnected.

JW: What is the larger goal of all the attackers in these terrorist incidents?

KB: Within this movement the end goal is not the act of mass violence itself. The violence is intended to awaken other white people to the cause and bring them into the movement. The goal is to incite a broader race war.

JW: But aren’t these people, the most recent ones at least, isolated loners? Dylann Roof, for example, the Charleston killer, didn’t go to meetings, as far as we know was not a member of an organization. As far as we know, neither did the accused El Paso killer.

KB: Yes—Dylann Roof didn’t have real-life connections with other activists. Nevertheless, he did have connections that meant a great deal to him in his earlier history of White Power activism. The thing that I always think of is the photograph of Roof wearing a Rhodesian flag patch. Rhodesia was a ruled by a white minority until 1979, when a revolution created the black-ruled Zimbabwe. This all happened before Dylann Roof was born. This has huge meaning within the White Power movement, and the fact that he chooses Rhodesia as an identifier when there have been so many other more recent flashpoints is a clear indicator that he is in communication with other activists and that he sees himself as part of this longer trajectory of action.

KB: It’s the Aryan Nation. It’s important to call this the White Power Movement because “white nationalism” makes people think of something much less radical, some sort of overzealous patriotism or shoring up whiteness within the body politic of the United States. The Aryan Nation is an inherently radical and violent project that is fundamentally opposed to the United States.

JW: Of course it’s crazy to think that a White Power uprising, even by heavily armed violent groups, could overthrow the United States government. How exactly do they imagine they could do this?

KB: This is the million dollar question, and this is why The Turner Diaries is so important. The Turner Diaries is a dystopian novel that first appeared in serial in the late 1970s in a prominent White Power magazine and was then published as a paperback. How could a fringe movement hope to take down the most militarized superstate in world history? What they lay out as essentially guerrilla warfare in which acts of violence and sabotage destabilize state power and awaken other white people such that they can eventually tip the balance and achieve an all-white world. The Turner Diaries has enormous saturation in White Power activists circles. It’s still cited and used very heavily today. Its language is still used to frame what activists are doing. It’s in bookstores in South Africa and Australia and New Zealand. It’s kept in stacks of 20 and 30 copies in the bunkhouses of paramilitary training facilities. It’s all over the place.

JW: What would you say was the biggest success of the White Power Movement over the last 50 years?

KB: The Oklahoma City bombing in 1995. We have a public narrative of that bombing as another of these lone wolf events. The reason that we understand it that way is that there was a huge and very unsuccessful seditious conspiracy trial a few years earlier, in 1987–88, in which the federal government attempted a large-scale prosecution of White Power activists. The jury came up with acquittals. The trial was hugely embarrassing for the federal government, and in its aftermath, a decision was made that these crimes would not be investigated as part of a movement, but only as individual acts. I think the language was they would make no attempt to tie the crimes to a broader movement.

JW: You’ve shown us in your book, Bring the War Home, how the historical roots of this White Power movement go back to the ’70s and the ’80s. Is there anything new about the recent attacks, say, El Paso or Charleston?

KB: Absolutely. There’s a clear change from the earlier shooters’ manifestos to the more recent ones: they contain more and more tactical instruction for future actors. The latest one in El Paso had information about ammunition, target selection, and ear protection. That kind of direct use of the manifesto as a messaging tool is new.

JW: Let’s talk about Donald Trump’s place in the White Power Movement. The El Paso killer’s manifesto quoted Trump extensively about an invasion from Mexico, but your history and analysis suggest a different way of understanding Trump’s role in white nationalist violence.

KB: The last time this movement declared war and carried out assassinations and stole military weapons and began a cycle of paramilitary training was not under a liberal president—it was in the second term of the Reagan administration, when arguably they stood to benefit from a lot of the policy coming down from the federal government. The idea that a sympathetic executive will make for a reduction in violent White Power activism simply doesn’t hold true in the historical record from Reagan to Trump.

This social movement is organized across a spectrum of sort of intensiveness. If you think about a series of concentric circles, what we’re talking about in the period that I study is a very small number of people, 10,000 to 25,000 at the center, who live and breathe this movement. Those are the people who might become violent, and who live their entire lives in this movement. They attend White Power churches, they pick each other up from the airport, they provide childcare to one another, they get their marital counseling in the movement. Often they live in communities that are entirely within the movement.

Outside of that, there are another 150,000 people who regularly attend rallies, purchase the newspapers, and send contributions. Outside of that, there’s another 450,000 people, who don’t themselves buy the newspapers, but who regularly read the newspapers. In the next circle are people who would never themselves read something that says “official newspaper of the Knights of the Ku Klux Klan,” but who might agree with some of the ideas in them, especially if they’re presented by a friend or if they come to them from someone they trust. That outer, more diffuse circle is a place where people are talking now about “invasion.”

JW: So far we’ve been talking about men. Is there any place for women in the White Power Movement, or are they just wives and mothers?

KB: This is the biggest surprise to me from the story. I thought I was going to be writing about paramilitary masculinity, but I discovered in the archives an intense and very deep network of women’s relationships that sustains this activism. Women in this movement serve a really important symbolic role: For many activists in the White Power Movement, it comes down to preservation of the race through the reproduction of white children. For instance, opposing immigration in the White Power Movement had to do with the number of white babies versus the number of other babies. Similarly, opposing abortion, opposing gay rights, opposing feminism, in white power discourse, all of this is tied to reproduction and the birth of white children.

That means there’s a hugely important symbolic role for women. And there’s also a material role that women undertook. They vouched for their husbands’ credibility and good character. They ran their own quarterlies, they did campaigns to support the birth of white children within their own communities. They even created tourist sites where people could go and visit the places where the people that they call “Aryan martyrs” had been killed by the federal government. Beyond all of that, if you want to see this social movement, women are how you can tell that these groups are interconnected. White Power shows up for a very long time as an array of seemingly disconnected forces, but if you look at the actual people who are involved, what you see is that this man’s daughter married the leader of that group, these two sisters married these two brothers and cemented an alliance between those groups, and women are how you can sort of see how this all worked.

JW: And there’s a Christian element here too, isn’t there? What’s the relationship between White Power and Christian Identity?

KB: Christian Identity is a political theology that became important to this movement in the ’80s and ’90s and is still around today. It’s the idea that white people are the true chosen people of God, and that everyone else, all other races and ethnicities, are descended either from Satan or from animals—doctrines differ on this point. Christian Identity is very similar to kind of the broader evangelical groundswell we see in the 1980s, not just on the far fringe but mainstream conservative circles. But evangelicals have the Rapture, which is the idea that they will be transported peacefully to heaven before the apocalypse. Christian Identity says there is no rapture, that people who believe will have to survive the end of days, and that they must take up arms to clear the world of nonwhite people before Christ can return. What that does is transforms this entire political and ideological belief system around white reproduction into a holy war, because now it is a project of faith for these to take up arms and engage in race war.