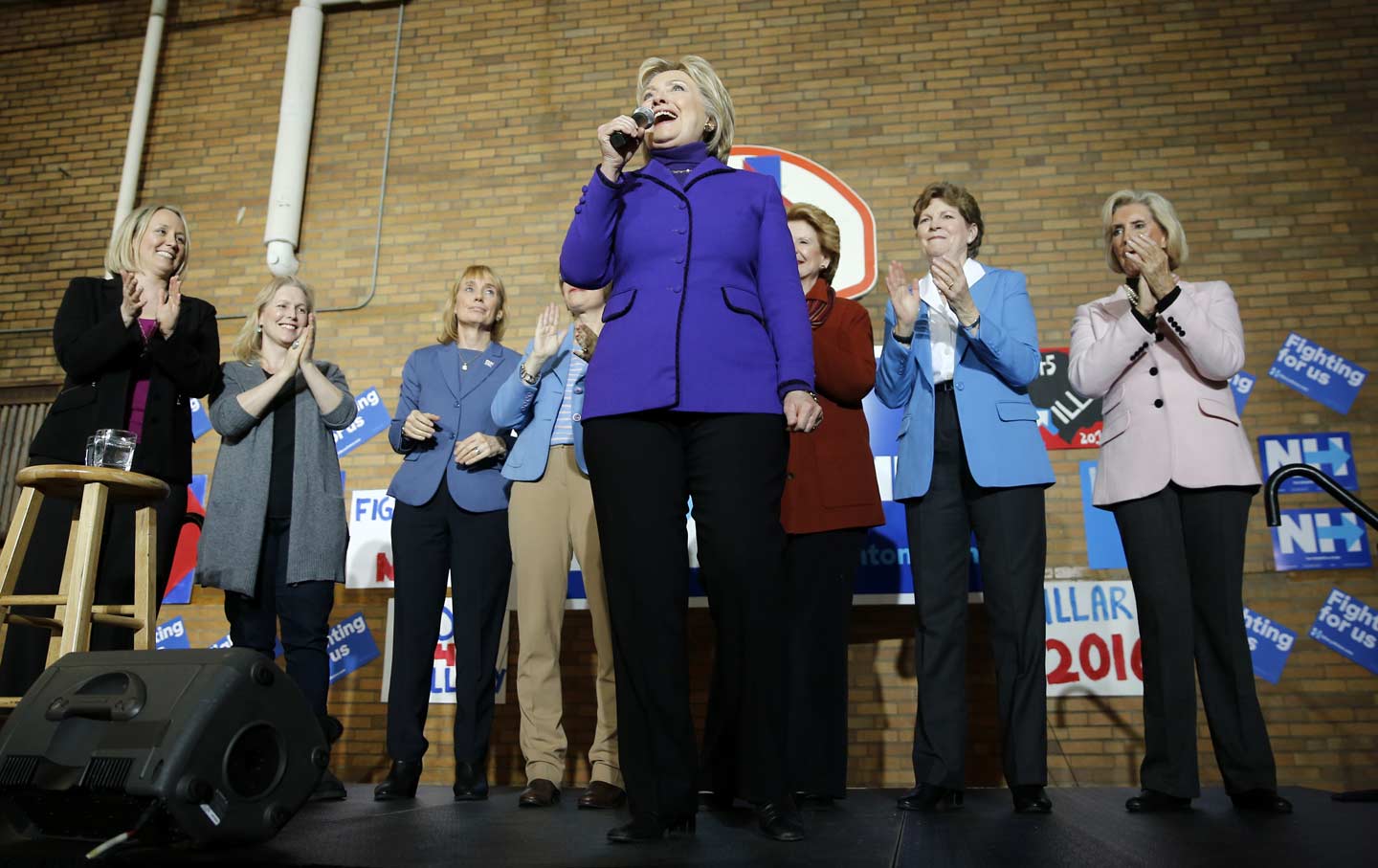 I’m going to posit something radical: The most vocal support for Hillary Clinton comes from women in the commentariat, very much like myself, who have had to fight sexism to succeed in public-facing, white-collar professions and relate to Hillary’s struggle to do the same. Many of these women have also engaged in other struggles that are the opposite of Hillary’s—women like Sady Doyle, Amanda Marcotte, and my own colleague Katha Pollitt are foes of Wall Street and imperial misadventure, while Hillary has often been a friend to the wealthy, and a hawk. A quote from Lena Dunham, stumping for Hillary in Iowa, captures the sentiment well: “As a newly grown-up woman who has experienced my fair share of backlash, public shaming and of puritanical judgements, that [Hillary’s resistance to sexist attacks] really moves me.” And it’s not just true for someone thrust into fame as quickly as Dunham. Every well-known feminist is subjected to the same language on Twitter that is directed toward Hillary Clinton on the campaign trail: bitch, harpy, dumb, ugly, and so on. As Doyle writes, “Her story moves me…simply as an example of a woman who got every misogynist trick in the world thrown at her, and who didn’t let it slow her down. On that level, she’s actually become a bit of a personal role model.” To quote another Clinton, we feel her pain.

We feel her pain.

There is a part of our own pain that we hope Hillary Clinton will fix. Marcotte, no stranger to misogynist trolls of all stripes, writes that “yes, having a woman president does matter, if only to spend election night watching the spreading urine stains on the pants of the men who spent months lecturing feminists.” Erica Brazelton wrote in these pages in June 2013 that “seeing said bodies in spaces not originally reserved for them matters.” Or to quote Sady Doyle, “When people yell at me, or dislike me, I no longer think oh, how horrible this is for me. I now think, well, if Hillary can do it. Seriously. If Hillary Clinton can be called an evil hag by major media outlets for most of her adult life and run for president, I can deal with blocking ten or twenty guys on Twitter.” Some of those guys are Sanders supporters; much digital ink has been spilled over the presence of “Bernie bros,” or dudes whose support for their candidate is expressed by being assholes to Hillary supporters. In other words, Hillary Clinton’s professional success represents one step closer to a meritocracy, where every little girl (and boy) knows that a woman can be president, and that this might trickle down to all of our workplaces, allowing each professional young woman to be taken a bit more seriously. To quote Kanye West’s timeless words, her presence itself is a gift—what she does is of secondary importance.

It's not very easy to measure the power of example. But let’s try.

This is a really interesting argument, because it is not, of course, very easy to measure the power of example. But let’s try. Some countries have tried to create policy around female representation. For example, lawmakers in Norway noticed that women were vastly underrepresented on corporate boards. So, in 2003, they passed a requirement that 40 percent of every LLC board be female. Eleven years later, a study has found that “no evidence of significant differential improvements for women in the post-reform cohort, either in terms of average earnings or likelihood of filling in a top position in a Norwegian business.” Women still, by and large, take time off to raise children and suffer from sexism in promotions. There has, however, been another Nordic model that’s worked quite well. In 1995, Sweden put in place a policy that not only offered generous parental leave, but motivated both men and women to take it by offering some months of parental leave that would be lost if men didn’t take advantage of them. This counteracted the effects of entrenched sexism (women would stay home and fall behind, while men did not). Today, things aren’t perfect, but women take 75 percent of parental leave, as opposed to 99.5 percent in 1974, and Sweden has ranked in the top four countries for gender equality since the World Economic Forum introduced their gender gap rankings in 2006. In other words, bright examples are a pretty inefficient way to create change, while interventions in the workplace and the distribution of wealth works pretty well.

To take another example, Sheryl Sandberg, the author of Lean In, has become an model for white-collar women everywhere; I have been critical of her book, but in reading it found plenty of advice that applies to my white-collar workplace and that I could plausibly take as advice. Her example and encouragement are no doubt a great boon for women committed to working in competitive Silicon Valley startups. At the same time, Sandberg’s example only goes so far—it doesn’t do much good to tell a housekeeper to “lean in”—she’d just be doing more work for her boss, with no gain for her, buying into a system emotionally that exploits her physically. And in fact, when Sheryl Sandberg visited Harvard, in part to celebrate women in business, she was petitioned by housekeepers at a Harvard-owned hotel who hoped that she would “lean in” with them as part of their campaign for a union and better working conditions. She declined. They ultimately gained a union anyway and have seen work abuses drop and income increase.

All of this is to say something pretty self-evident if you think about it—example and representation is probably pretty important within a class—it’s hard to prove, but our gut tells us that role models matter. The mere existence of female leaders can inspire confidence in others who have opportunities and just need that extra strength to seize them. What representation is pretty bad at doing is affecting who gets those opportunities—if you’re poor, no positive example is gonna just boost you out of it. That’s an old right-wing myth—if you can look up at your superiors, you can tug your bootstraps in their direction.

Others have catalogued Hillary Clinton’s opposition to policies that would redistribute wealth and power toward women a la the Nordic model, so I’ll keep that brief here. Suffice to say that she has spoken about women caring for their children on welfare with venom and has made herself an enemy of the poor. She is surely not the most egregious opponent of women’s well-being—she is, after all, pro-choice—but her allies, practically speaking, are big donors like Goldman Sachs and Walmart, which lobby hard against redistribution and good treatment of women in the workplace. Voting for Hillary is, unfortunately, a strike against poor people.

So, to support Hillary Clinton is to support a genuinely good example for white-collar women’s behavior when trying to beat sexism at work at the expense of policies that might help the majority of women. Or is that a false dichotomy?

Some believe that the presence of Bernie Sanders in the race has offered an alternative—his policies redistribute more, and he is a self-professed feminist, but…he is a man. No inspiring grit-in-the-face-of-sexism to be had in this old white dude. He is, however, a socialist and, if you haven’t figured it out already, I think socialism is women’s best hope because it accounts for the policies that will get them the stuff they need. His policies are better for more women because they’re more redistributive.

The nurses of the 90 percent female union have found themselves more inspired by Sanders.

“When we heard Bernie Sanders talking about everything we’ve been talking about it was a no brainer,” says Karen Higgins one of three co-presidents of the National Nurses Union and a nurse for the last 40 years. She’s spent the last 37 working in intensive care and at 62 still works full-time at Boston Medical Center. When I spoke with her, she was home preparing to go campaign for Sanders in New Hampshire. The NNU has endorsed him, citing his longtime alignment on their trademark issues: single-payer healthcare, taxing Wall Street, less college debt for their kids, and opposition to the Trans-Pacific Partnership, which includes concessions to pharmaceutical companies. Contrary to much commentary on the left, the nurses don’t regard a commitment to single payer as foolishly ideological: Higgins describes receiving intensive care patients whose first question is what the treatment will cost and how they can pay. She differentiates between an insurance system (Obamacare) and universal healthcare, which would eliminate the need for individuals to wrangle with private companies. It’s been a long time since a serious candidate carried a commitment to this system as a banner issue. The nurses of the 90 percent female union, as a result, have found themselves more inspired by Sanders.

When I ask Higgins about gender, she does seem a tad regretful. “There’s a piece of me as a woman that would definitely have loved to see a woman in that position so there’s a little bit of a heartbreak that she did not come out as strong” on the nurses’ issues. “It would be nice if she had taken a stance.” What does she think of the Twitter phenomenon of Bernie Bros? “I don’t think think I’ve seen that one. I’m not good about Twitter.”

It's possible to fight sexism at work and abuse the help. One could argue Hillary has done this on a national scale.

The argument that a Clinton presidency would increase respect for women, while a Sanders presidency would do nothing to create greater gender equity is belied by the experience of nurses and the people they serve. Hillary might face sexism at work, and so might white-collar women, but so do the nurses—they do care work largely assigned to women that has enjoyed little support from the government in terms of funding, wages, and reasonable structures of care. The problems that afflict the majority of women can only be resolved in the realm of organizing, policy-making, and other large-scale efforts. The proper question for a presidential election is who will forward these big programs. It is absolutely possible to fight sexism at work, come home, and abuse the help. One could argue that Hillary has done this on a national scale. “I hate to say this to women,” says Higgins, “but that has to be the real priority, whether it’s a man or a woman—what it’ll take to get people back on their feet in this country and take care of them.”