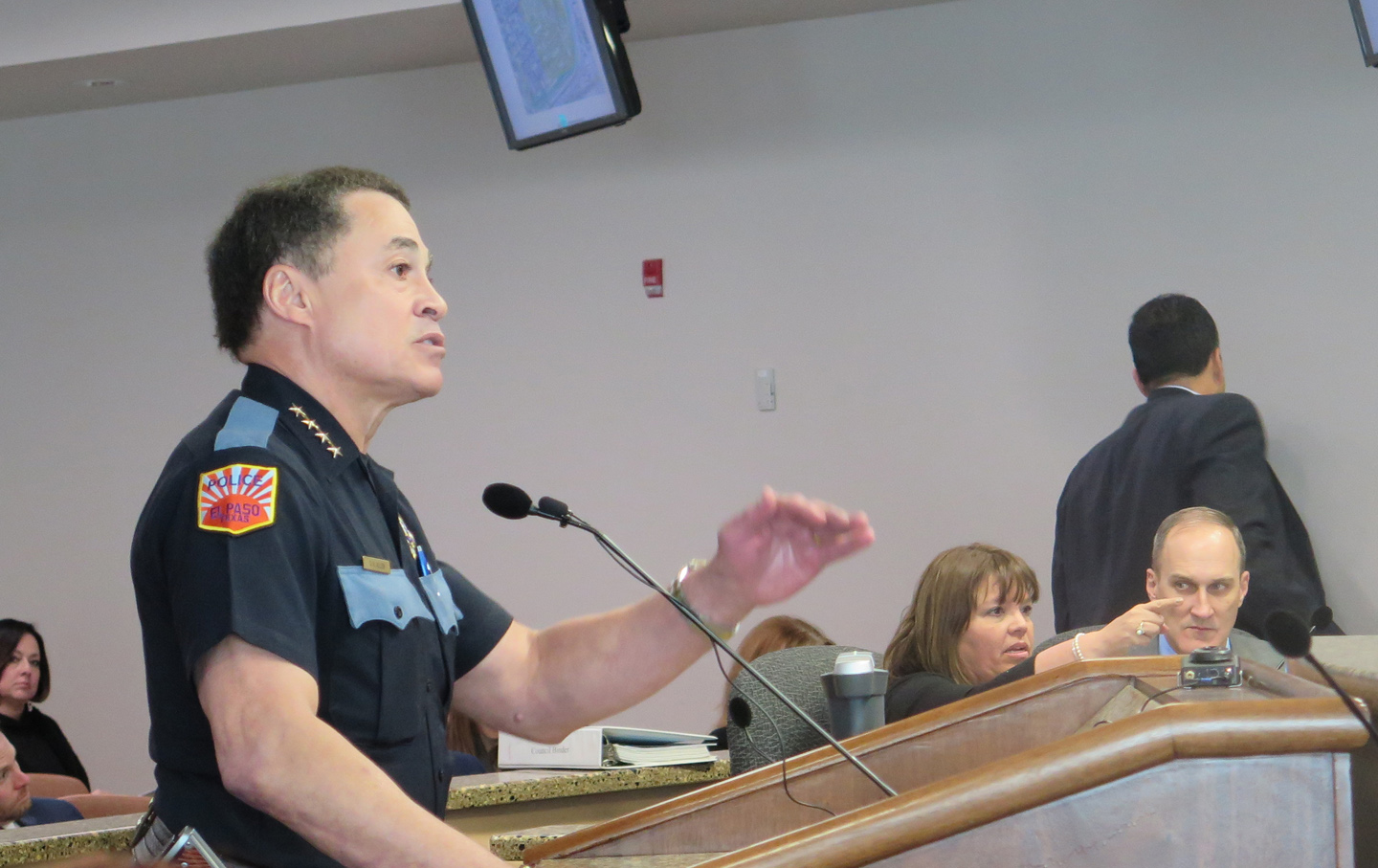 An African-American representative from El Paso County took the podium at last week’s Republican National Convention, with the party’s celebrity-of-the-moment, Milwaukee County’s African-American sheriff, David Clarke, to denounce the Black Lives Matter movement. Many people watching assumed that El Paso County was that place on the Texas-Mexico border where illegal immigration, narcotrafficking, and terrorist mayhem reigns, because the country needs a wall. But all those assumptions were wrong. The rep was actually from El Paso County, Colorado, several hundred miles north. Back in El Paso, Texas, meanwhile, the border city has such a low homicide rate—an average of only 15 a year since 2001, in a population that’s now about 700,000—that El Paso has for years been deemed the safest city of over half a million people in the country.

The Coming War on ‘Black Nationalists’

No one knows why El Paso is so safe. The Border Patrol crawls along the Rio Grande river, in squad cars, vans, and armed; they like to take credit for the law and order. The police do, too. They’re also headed by an African American, Chief Gregory Allen.

Allen is a lifelong El Pasoan, whose African-American parents and grandparents also lived for generations on the Mexico border. One of Allen’s grandfathers was a railroad porter, part of a venerable black community in El Paso. During the height of Jim Crow, A. Philip Randolph unionized black train porters, making their job some of the best that African-American men could aspire to. The Southern Pacific and the Santa Fe rolled through Texas to points north and west. El Paso was a major stop on the trips, and many black porters bought homes and raised their families here.

Among civil-rights activists in El Paso, Greg Allen, age 65, has for long been known for a “tough cop” attitude, at times bordering on thuggishness. An avid practitioner of Shotokan, Tae Kwon Do, Hapkido, and karate, he is muscular, curt, and often scowls when speaking with the media. In the early 1990s, during the height of “super-predator” and “gang” paranoia nationally, he was a police sergeant and member of the department’s anti-gang unit. In one incident during those years, an off-duty policeman parked at an Arby’s had a run-in with a high-school student who the cop thought disrespected him. Allen joined that cop and others in arresting the boy and a few others. The boys were illegally detained in a police office, and one boy said Allen cursed at him and knocked him around so hard that both of his eardrums burst and he suffered a fracture of the jaw. A police review board substantiated the charges and Allen was suspended from the force for a week. The assault made the newspapers, but that was before the days of the Internet. By 2008, everyone had forgotten about the beating, and the City Council appointed Allen as police chief.

It was in that role that Allen appeared, dour and scowling, at a press conference just after five law-enforcement officers were murdered on July 7 during an anti-violence protest in Dallas. The press conference, organized by local El Paso politicians, was intended to express regret and sadness not only at the deaths of the Dallas officials but also at those of the two black men recently killed by cops in Baton Rouge and suburban St. Paul. Allen stood apart, refusing to speak, until reporters approached him. A vigil, organized by local university students affiliated with the movement for black lives, was scheduled for that weekend. Asked what he thought about the upcoming event, Allen, stiff with anger, said that Black Lives Matter—presumably referring to the national organization—was a “radical hate group” that was responsible for what happened in Dallas and which “the leadership of this country needs to look into.”

Allen’s statement was reported throughout the right-wing media, including internationally, coming as it did from a high-ranking black cop.

Meanwhile, to the extent that it’s possible in sleepy, media-starved El Paso, all hell broke loose… or maybe, all heck.

Congressmember Beto O’Rourke (D-Texas) joined County Judge Veronica Escobar and other pols in denouncing Allen and implying that the City Council should fire him. The City Council quaked—many members are beholden to the local cop union for campaign support—and did nothing.

Citizens, meanwhile, went to war on social media. El Paso is only about 14 percent white (Latinos predominate, at 81 percent, while blacks are about 3.5 percent). Many people flocked to the police department’s Facebook and Twitter pages, praising Chief Allen and denouncing either the national network of Black Lives Matter organizations or the more nebulous movement that has formed under that banner. A few critics chimed in on both sites, expressing distress, disgust, and shame, mostly directed at Chief Allen.

A few days after Allen made his incendiary statement, a coalition of black church leaders quietly called a town-hall meeting with Chief Allen for the city’s tiny African-American community. Several people came, some from the historic community, others attached to El Paso’s large military presence through Fort Bliss, the Army station in town. The media were not there, but an attendee recorded part of the meeting. In the video, Julie Loving-Scott, a stylish real-estate agent, stands and confronts Chief Allen. She describes moving herself and her four black sons from Georgia to El Paso, specifically in order to feel “safe.” Now, Loving-Scott says, her voice shaking, her sons, who are interested in supporting local Black Lives Matter events, are fearful. “What do you have to say about this, Mr. Black Man?” Loving-Scott asks, livid.

Allen does not out-and-out apologize to Loving-Scott. (He has attributed his remarks to his “emotions” about the dead cops in Dallas.) But he does assure Loving-Scott that her sons are safe in his town.

Maybe they don’t have to worry much about being murdered. But according to El Paso’s annual racially sorted traffic-stop data, locals do need to worry about being searched and arrested if they’re driving while black.

Statistics show that blacks have an almost three-times higher rate of being searched after a stop than do whites, and they’re four times as likely to be arrested. (Local Latinos are also much more likely to be consent-searched and arrested than whites.) The numbers for black people reflect experiences recounted to me. A 31-year-old man with a good job and three years of college said he has been stopped about five dozen times in 12 years—by both Latino and Anglo police officers—in which he’s been asked to consent to searches, sometimes sat on the curb, and occasionally has been called a mayate—the border-Spanish word for “nigger.” A middle-aged, military lifer said he knows two young black men and a woman in town who’ve had similar experiences. Black City Councilman Carl Robinson has talked during a council meeting about young blacks complaining of being stopped in “The Devil’s Triangle”—a neighborhood in the largely black, military side of town. Police have said that the Triangle has a lot of drugs and prostitution. They’re suspicious of the area and the young people in it.

A black cop in charge, even in a mainly Latino community, doesn’t seem to solve any problems, especially when the black cop denounces the black children of his town.

But a black cop in charge gets play when he denounces—in the press, at the Republican National Convention. El Paso County, Colorado, got some of the play. El Paso, Texas, hard on the border of Trumpian paranoia, missed the podium, but made the press. The response of the community, a border-town community of all colors, got no attention, and meanwhile, all the talk is of a wall.