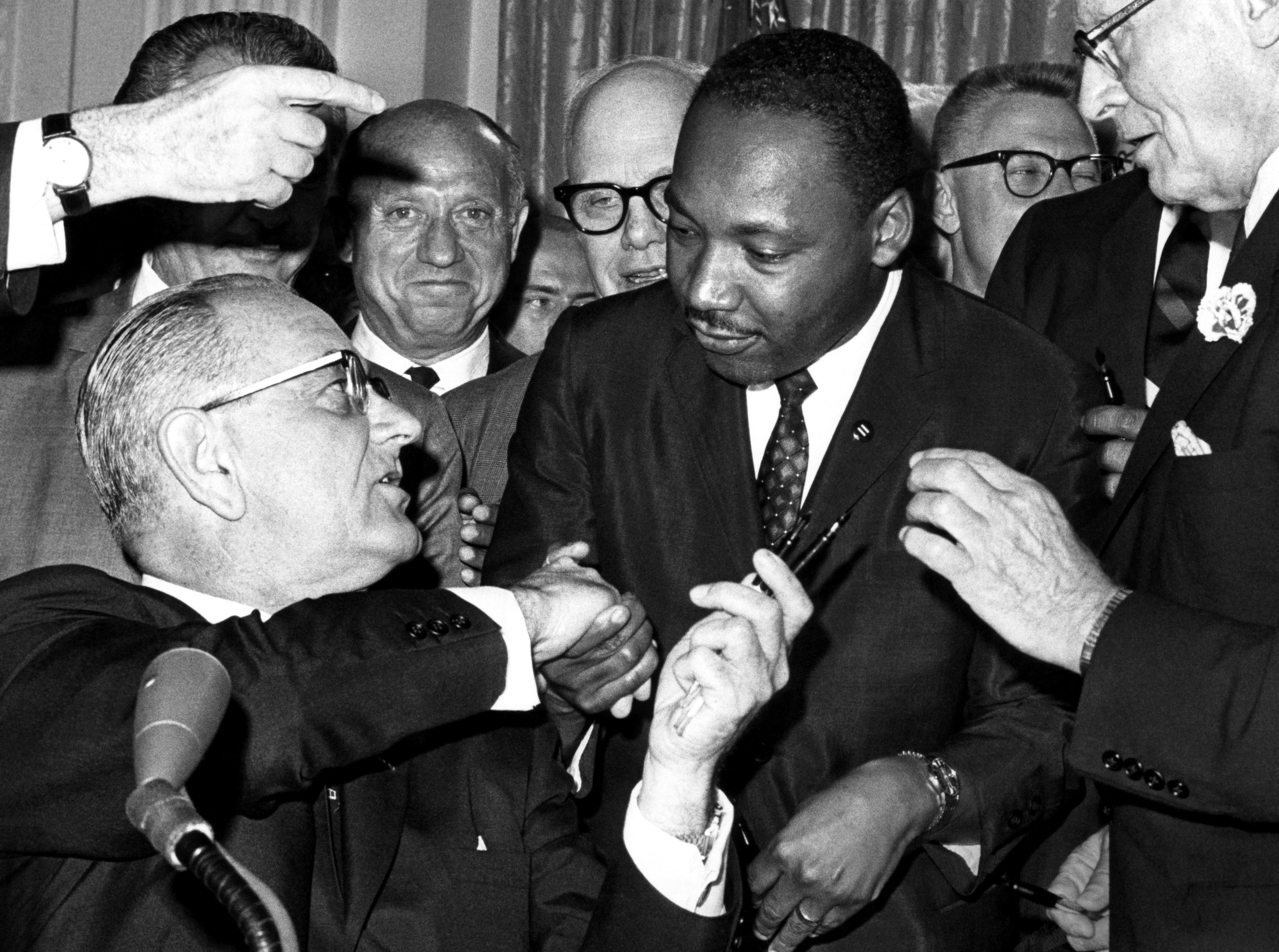 Well into the twentieth century, many leading Republicans took seriously their party’s history and the responsibility that went with it. They worked to earn the votes of African-Americans and all supporters of equal justice under law, declaring in the party’s 1960 platform that

[t]his nation was created to give expression, validity and purpose to our spiritual heritage—the supreme worth of the individual. In such a nation—a nation dedicated to the proposition that all men are created equal—racial discrimination has no place. It can hardly be reconciled with a Constitution that guarantees equal protection under law to all persons. In a deeper sense, too, it is immoral and unjust. As to those matters within reach of political action and leadership, we pledge ourselves unreservedly to its eradication.

True to their word, top Republicans in Congress provided advice, counsel and support that was essential to the development and passage of the Civil Rights Act of 1964.

While Democrats struggled with their party’s internal contradictions on the issue—deferring far too frequently to the demands of Southern segregationists who held powerful committee chairs in the House and Senate, and who commanded machines that delivered needed electoral votes—Republicans demanded action. “When President John F. Kennedy failed to submit a promised civil rights bill, three Republicans (Representatives William McCulloch of Ohio, John Lindsay of New York and Charles Mathias of Maryland) introduced one of their own,” noted The New York Times in recalling the great struggles of the era. “This inspired Mr. Kennedy to deliver on his promise, and it built Republican support for what became the Civil Rights Act of 1964.”

When the key votes in the House and the Senate came fifty years ago, Republicans were significantly more supportive of the Civil Rights Act than were Democrats. The measure passed the House on a 290-130 vote, with support from 61 percent of House Democrats (152 in favor, ninety-six opposed). But Republican lawmakers gave it 80 percent backing (138 in support, just thirty-four against).

The critical test came in the Senate in June, 1964. Republicans aligned with northern Democrats to break the segregationist filibuster. Then, 82 percent of Republican senators backed the final passage of the measure, as opposed to two-thirds of Senate Democrats.

When President Lyndon Johnson signed the Civil Rights Act into law on July 2, 1964, he is said to have told an aide, “We [Democrats] have lost the South for a generation.”

But that statement did not just apply to the Democrats. Republicans were, necessarily, part of the change equation.

The change began to develop quickly. Two weeks after the Civil Rights Act was signed into law, the Republican National Convention in San Francisco nominated for the presidency Arizona Senator Barry Goldwater, one of the handful of Republican senators who had opposed the measure.

Two months later, a key Democratic foe of civil rights, South Carolina Senator Strom Thurmond, switched his party affiliation and began working to remake the Republican Party so that it could appeal to Southern white voters. Thurmond was an essential backer of the campaigns of Goldwater in 1964, Richard Nixon in 1968 and Ronald Reagan in 1980. His influence on Nixon, who developed a so-called “Southern strategy” to help realize Thurmond’s vision of a transformed political map, was immense. It extended deep into the decision-making process for the selections of a vice president and Supreme Court nominees.

At the same time, civil rights advocates within the Republican Party either left or were defeated. House minority leader Charles Halleck, the Indiana Republican who worked closely with the Johnson administration to pass muscular civil rights protections was deposed the following January by his own caucus. John Lindsay, who was rejected in his own party’s 1969 New York City mayoral primary (winning instead on the Liberal Party line), became a Democrat in 1971. His ally in the 1963 civil rights push “Mac” Mathias was so unsettled by the GOP’s move to the right that he threatened to run for the presidency in 1976 as a progressive independent. Others champions of civil rights, such as California Senator Thomas Kuchel (the Republican floor manager in the fights to pass the Civil Rights Act of 1964 and the Voting Rights Act of 1965), New Jersey Senator Clifford Case and New York Senator Jacob Javits, would eventually lose primaries to conservative challengers.

The senators who were rejected did not lose merely because of their civil rights advocacy but because of their Lincolnesque vision of a progressive Republican Party that, in Kuchel’s words, “brought to politics the philosophy of governing for the many.”

That philosophy was replaced by a more rigid and divisive politics. “The Republican Party that had been ceased to be sometime in the 1980s, and the modern party—the radical conservative party—not only has little or no interest in honoring its history, it is actively hostile to it,” Geoffrey Kabaservice, the author of the brilliant 2012 book Rule and Ruin: The Downfall of Moderation and the Destruction of the Republican Party from Eisenhower to the Tea Party explained to Todd Purdum.

Purdum is appropriately critical of both major parties, but his most damning statement is an observation that “the Party of Lincoln became the party of white backlash, especially in the South.”

Thurmond was certainly not the only Southern Democrat to switch his party affiliation in the period following the passage of the Civil Rights Act and the Voting Rights Act—Jesse Helms made the change in 1970; Trent Lott, an aide to a segregationist Democratic congressman, ran for the House as a Republican in 1972; Virginian Mills Goodwn Jr., whom The New York Times described as “a pillar of his state’s policy of ‘massive resistance’ to the racial integration of schools” during his years as a Democratic state legislator, was elected governor as a Republican in 1973. But Thurmond was the most prominent, and the most influential of the party switchers. Over time, he evolved his rhetoric away from the crude language of his 1948 States Rights Democratic Party presidential run and his Senate filibusters to a more politically palatable critique of “big government.” The senator would eventually say that “if I had been elected president in 1948, history would be vastly different. I believe we would have stemmed the growth of Big Government, which had begun with the New Deal and culminated with the Great Society.”

That statement conveniently neglected the fact that Thurmond and his allies in 1948 did not just talk about the size of the federal government. The same States Rights Democratic Party platform that declared its opposition to “the totalitarian, centralized bureaucratic government and the police nation called for by the platforms adopted by the Democratic and Republican Conventions” also announced, “We stand for the segregation of the races and the racial integrity of each race.”

Thurmond left the Democratic Party the first time, in 1948, because the Democrats were becoming more like the Republicans on the issue of civil rights—as both parties moved, slowly but surely, toward a recognition that Hubert Humphrey was right when he told the 1948 Democratic National Convention it was time “to get out of the shadow of state’s rights and walk forthrightly into the bright sunshine of human rights.”

For a time in the 1950s and 1960s, enlightened Democrats and Republicans competed to be the party of civil rights. And the Republicans were in the lead through much of the period—encouraging Massachusetts Senator Edward Brooke, the first African-American elected to the Senate in the modern era, to observe that the Republican Party “was, I believe, much more progressive than the Democratic Party.”

Republicans were not the party of Thurmond, they were explicitly and proudly the party of Lincoln. That 1960 GOP platform read:

Equality under law promises more than the equal right to vote and transcends mere relief from discrimination by government. It becomes a reality only when all persons have equal opportunity, without distinction of race, religion, color or national origin, to acquire the essentials of life—housing, education and employment. The Republican Party—the party of Abraham Lincoln—from its very beginning has striven to make this promise a reality. It is today, as it was then, unequivocally dedicated to making the greatest amount of progress toward the objective.

The tragedy of the Democratic Party through much of its history was an unwillingness to stand strong against its Southern wing and to clearly align itself with the cause of social and economic justice. The tragedy of the Republican Party is that when Democrats began to do the right thing, key figures in the GOP welcomed Thurmond into its fold and began to craft not just a “Southern strategy” but a politics of reaction. There were plenty of Republicans who resisted the trend at the time, and there have been plenty of Republicans since (notably former Congressman Jack Kemp and former Secretary of State Colin Powell) who have sought to broaden the party’s focus and appeal.

But as one of the great Republican advocates of civil rights, John Lindsay, noted when he left the GOP in 1971, “Today the Republican Party has moved so far from what I perceive as necessary policies…that I can no longer try to work within it.”

John Avlon, the longtime speechwriter for New York Mayor Rudy Giuliani who has since become a prominent advocate for centrist projects such as the “No Labels” movement, wrote several years ago: “The Republican Party was right on civil rights for the first one-hundred years of its existence. It was right when the Democratic Party was wrong. Its future strength and survival will depend on rediscovering that legacy of individual freedom amid America’s essential diversity. To win in the 21st century, the Party of Lincoln needs to start looking like the Party of Lincoln again.”

It is also true that Republicans have a right to reflect proudly on the role the GOP played in securing approval of the Civil Rights Act of 1964.

This anniversary belongs to both parties—to Democrats who recall Johnson’s leadership, to Republicans who recall the role played by congressional Republicans.

Unfortunately, the Republican Party that has spent much of its energy in recent years promoting restrictive Voter ID laws and that is currently entertaining a telling debate about Mississippi Senator Thad Cochran’s outreach to African-American voters in last month’s runoff election fight, often finds itself at odds with the legacies of Lincoln and the Republicans who championed civil rights in the mid-1960s.

“There’s also a dark vein of intolerance in some parts of the party,” Powell said on NBC’s Meet the Press last year. “What do I mean by that? What I mean by that is they still sort of look down on minorities.”