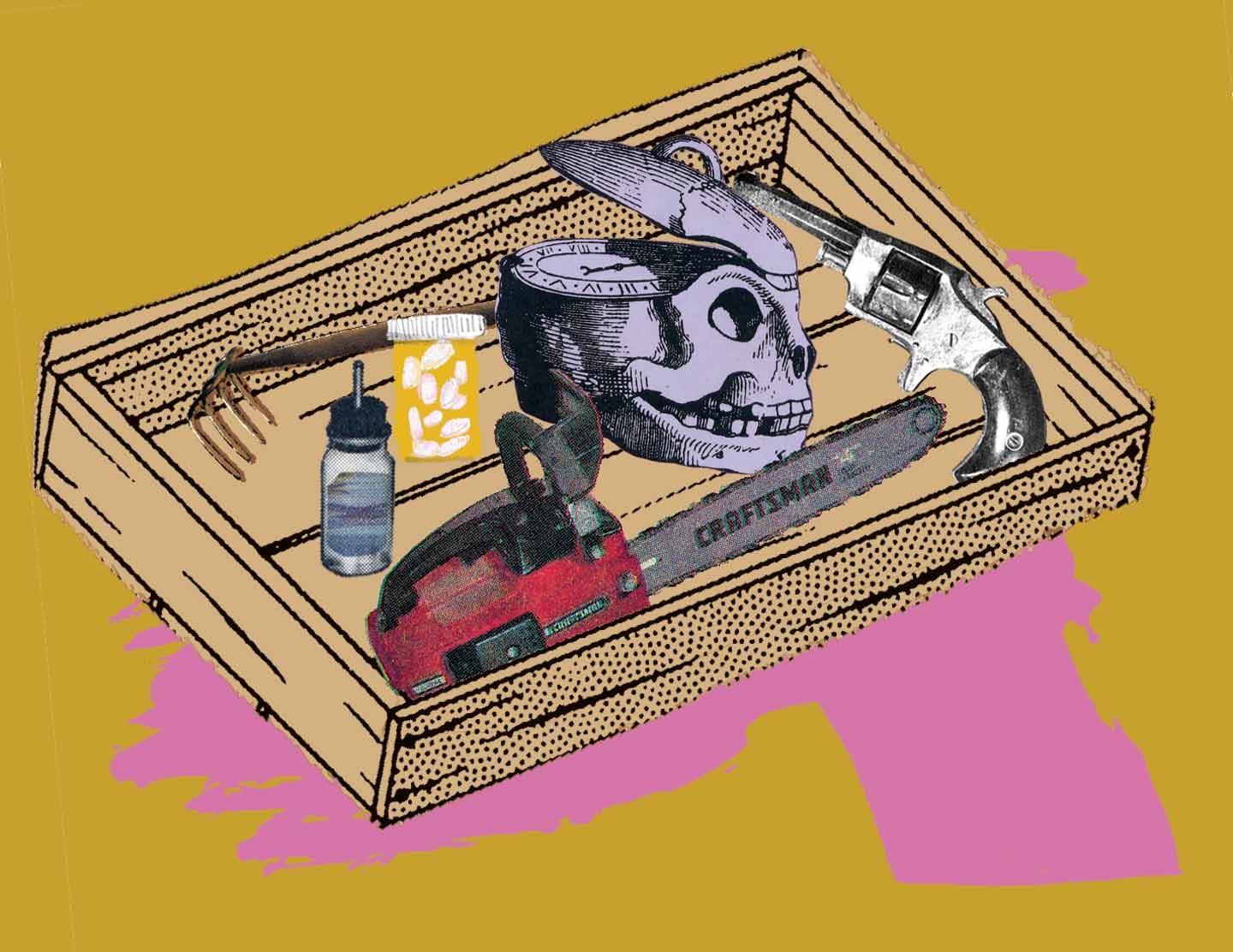 Dear Liza,
I’m fighting for a better world, but if that doesn’t come along, I will be destitute when I can no longer work. Is it OK to stockpile suicide supplies in case of that eventuality? I don’t have family support, and most of my friends are even worse off than I am. I’m an American now living in the United Kingdom.
—Temporarily Able-Bodied1

I am so sorry that you’ve been living with the pain and fear that inspired this letter. You’re right, of course: We must build better social safety nets so no one ever asks this question. But even if socialism doesn’t emerge in time for your old age, you’ll still have ways to flourish.3

Ann Neumann, author of The Good Death: An Exploration of Dying in America and a hospice volunteer, is emphatic that suicide won’t be your best recourse. She points out that even in this age of right-wing austerity, you have far more financial resources than you realize, whether from national or local governments or from charity. In the far-right United States, Social Security, Medicare, and food stamps seem likely to survive in some form; and while public assistance for the elderly or disabled in the United Kingdom is hardly generous, the poverty rate among seniors is much lower than it is here. Help is available if you seek it out. In fact, a 2014 report by Age UK revealed that a key cause of poverty among older people was the failure to take advantage of government benefits; many don’t know what they’re entitled to or are too proud to ask for it. An elder-law attorney can help you figure out what forms of assistance you’re likely to have access to (if social arrangements don’t change as much as we hope they will).4

Asking for a Friend: How Can a Working-Class Person Like Me Change the Democrats?

Ashton Applewhite, author of This Chair Rocks: A Manifesto Against Ageism, emphasizes that the strongest factor in aging well is a robust social network—not, perhaps surprisingly, money. Neumann agrees: “The happiest community I regularly visit is the senior center at the Red Hook Houses,” she says, referring to a public-housing project in Brooklyn. “They pool their resources and have such a sense of community. They enjoy each other so much, and they have a better quality of life than anyone.”5

For those of us imbued with an ethic of self–reliance, or who are happiest reading a good book in solitude, this can be tougher than death to contemplate. “I have a horror of the collective,” says Applewhite. “In my ideal life, I’d live alone in a turret, entertaining a very handsome visitor now and then. But I realize I have to get over this. Community, community, community is the only way we are going to age affordably and comfortably.” That could mean starting to find people now who are interested in future group-living arrangements, perhaps where individuals agree to support one another financially if anyone is incapacitated, as biological families and long-term couples often do. Many find multigenerational group living to be especially rewarding. At the very least, try to develop deep ties with people who live nearby so you’ll be able to help each other solve practical problems. “You have the family you are able to create,” Neumann stresses, “and there are places you can go to make community.” If this seems daunting, Neumann adds, “tell [Able-Bodied] to give me a call, and we will help you find your people!” Neumann is also willing to help you find an elder-law attorney who can advise on resources.6

You are sadly not alone in wondering about your future economic survival. In the United States, private and public pensions are in crisis, and other neoliberal regimes have similar problems. Almost a third of Americans over 55 have no retirement savings. As you start to think about collective responses and build more community into your life, remember that most people need this as much as you do.7

Dear Liza,
How do you handle passes from friends? Must I socialize my sex life?
—Radical Monogamist8

“It is a curious fact that with every great revolutionary movement the question of ‘free love’ comes into the foreground,” Engels mused in 1883. Some anticapitalist radicals—like one letter writer last month—have balked at monogamy on the grounds that other human beings shouldn’t be treated as property. Similarly, utopian communities in the 19th and 20th centuries often espoused polygamy as part of an ethic of sharing. In the 1960s, amid political turmoil, some hippies rejected monogamy as unnatural, an example of how social conformity alienates us from our desires and feelings. Whatever you think of such ideas, it makes sense that as people start to think about alternative ways of organizing society, they wonder if there might be other ways of living their own lives.10

Having such questions in “the foreground” isn’t bad for you and your partner; after all, when conventional practices (heterosexuality, marriage, monogamy, raising kids) are more freely chosen, they tend to become more egalitarian, more driven by desire than by social or family pressure, and more satisfying.12

As for your friends, a polite “No, thank you—I’m flattered but monogamous” (only if you are flattered, of course!) should suffice to deflect such overtures. After all, monogamy is still so common that almost no one is going to take it personally.13