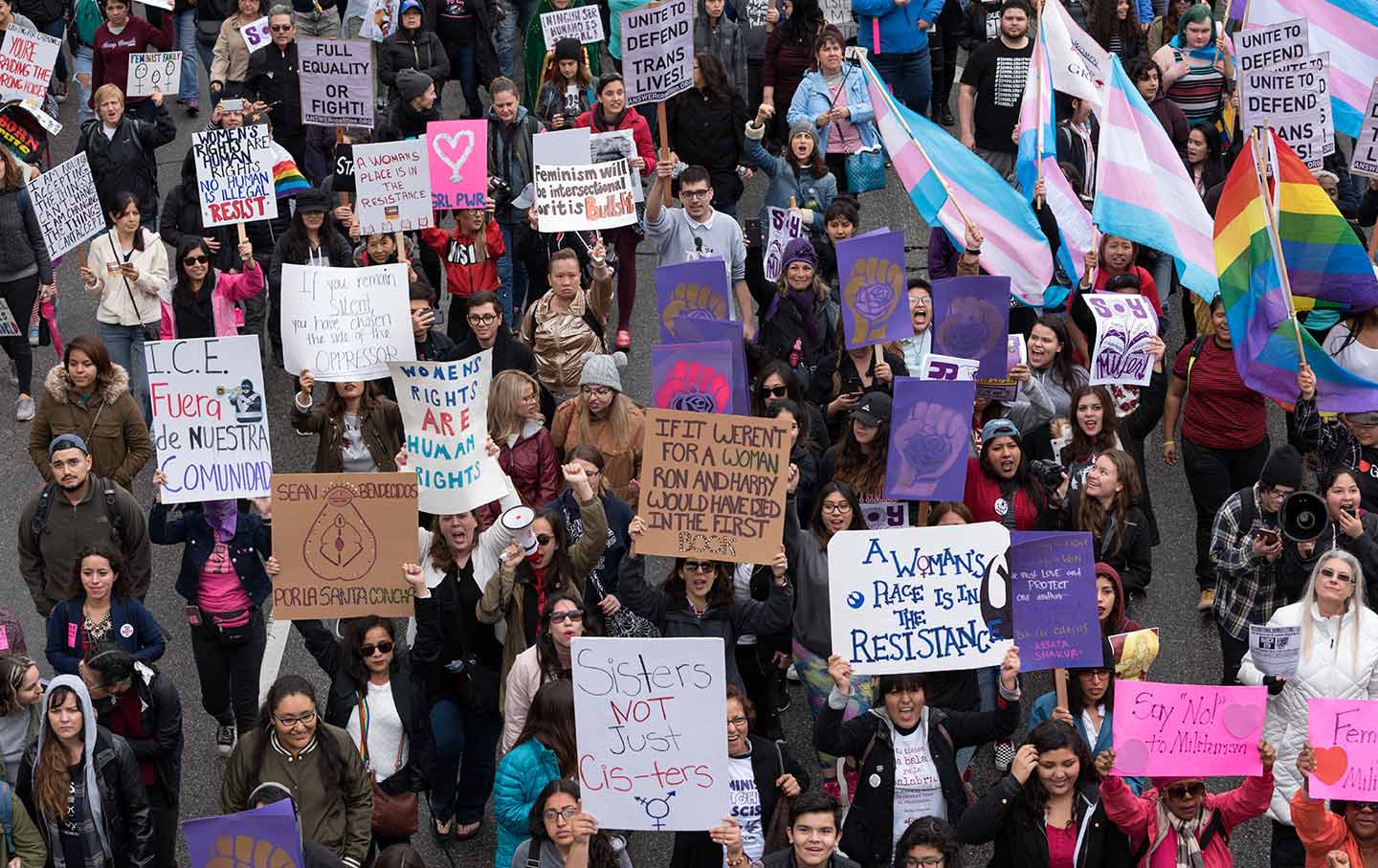 The international women’s strike of March 8 is being put together with the unpaid labor of mostly women-led and grassroots organizations. No sponsorship from businesses, big or small, underwrites our organizing. As organizers of March 8 we believe that while Trump epitomizes our problems, the problems of devastating inequality, rampant racism and sexism, and violent imperialism did not begin with Trump. They are rooted in the history of US settler colonialism and were exacerbated in the decades of neoliberalism that preceded Trump.

The solution to dangerous Trumpism, hence, is not the “progressive” neoliberalism of Hillary Clinton. This position of “Neither Clinton Nor Trump” has, predictably, ruffled some feathers within the mainstream feminist establishment. Meghan Daum, writing in the Los Angeles Times, characterizes March 8 as only for “privileged women,” because working-class women, according to Daum, could not afford to “skip work, shuffle childcare and household duties to someone else.” Using the same logic, Maureen Shaw, writing for Quartz, argues that March 8 may be good idea “[b]ut it’s likely that mostly privileged women will be the ones participating.”


The issue of whether working-class women, immigrant women, and women of color can participate in March 8 is a very important question and worth paying attention to. Kate D. Griffiths and Magally A. Miranda Alcazar, two organizers of the women’s strike, have addressed this concern in great detail in response to a piece by Sady Doyle raising an analogous concern. In their article, they concretely show the numerous political actions that women of color and working class women have taken, over the last few years, at considerable risk to themselves and their families. Women, including many queer women, have been the leading force in the Black Lives Matter movement. Native women’s mass actions to protect our land and the environment against the Dakota Access Pipe Line have unleashed brutal state violence. In 2006 women participated in one of the largest mass mobilizations for immigrant rights in recent history.

More traditional strikes also have been led recently by women. Women at New York’s Babeland walked out on the job and through their militancy won a union contract. The most successful union battles of recent years have been led by unions whose membership have been majority women. The Chicago Teacher’s strike of 2013, the Minnesota Nurses strike of 2016, the Seattle Teachers strike of 2015, even Fight for 15 have been spearheaded by unions where women and especially women of color have played leading roles as both rank-and-file activists and in the leadership.

Today, several labor unions and labor groups are actually involved in backing and building for March 8.


Take one example: Chapel Hill-Carrboro schools has announced it will close down March 8 because it expects large numbers of their teachers and staff not to turn up on the day. Speaking to AlterNet, Megan Moskop, a New York City teacher and an organizer with the Movement of Rank and File Educators (MORE), a caucus of the United Federation of Teachers, explained why MORE was officially endorsing the March 8 day of actions “because 70 percent or more of the teaching profession in New York City is women. Sexism in our profession is rampant. We only have the most basic family medical leave.… When women are standing up in the international community and saying sexism is real, we want to stand alongside them.”

Under the radical coalition, Women Workers Rising, other labor unions and grassroots labor groups are calling for a demonstration at the Department of Labor in Washington, DC, to “end workplace violence and harassment and promote pay equity, one fair living wage, paid leave and labor rights at work.” The action is being organized by One Billion Rising in coalition with at least eight union or worker organizations, including National Nurses United, Restaurant Opportunities Centers United, OUR Walmart, the American Federation of Teachers, Jobs with Justice, the Domestic Workers’ Alliance, and other labor and social-justice groups.

But have March 8 organizers asked women to walk off their jobs irrespective of their work conditions and vulnerabilities? It would indeed be a privileged feminist movement if this were the case. The organizers of March 8 have insisted that participation in March 8 action is not limited to work-stoppage alone. Indeed, in several public venues we have highlighted the numerous ways to strike, as varied as the kinds of labor women performed in society.

Continuing the same message of the diversity of ways to strike, Andrea Cristina Mercado, the campaign director for the National Domestic Workers Alliance, told AlterNet. “Our work, contributions, and humanity continue to be undervalued.… While some domestic workers are participating, we did not call on members to strike, because it’s hard for many who are caring for elders or children to take a day off,” Mercado continued. “But there are so many ways to show resistance, and on March 8, we will stand together, and embody radical sisterhood.”

Are you calling us privileged?

Both Shaw and Daum have been vocal supporters of Hillary Clinton’s candidacy. During Clinton’s campaign, Shaw wrote:

We are witnessing history—feminist history—in the making. If Hillary ends up in the Oval Office this November, she will be America’s first female president. But equally important, she will be our first openly and unapologetically feminist president.

The March 8 strike is first and foremost against this version of feminism, a feminism that allows truly privileged women like Hillary Clinton and Sheryl Sandberg to use the language of women’s rights to prop up capitalism. This is not, we think, the solution to the immiseration of millions of women.


Let us address the question of privilege head on in the context of this March 8 strike and its participants.

The Clinton Foundation has been in the news for its highly questionable management of the distribution of aid to Haiti. It has been criticized for pushing aside survivors and contributing to a climate of disaster capitalism that marred much of the international relief effort. Something that both Shaw and Daum have ignored in their respective pieces is that women from countries such as the Dominican Republic, Nicaragua, Mexico, Costa Rica, Guatemala, and Haiti are going on strike on March 8, together with women from Thailand, Vietnam, Myanmar, Peru, Brazil, Venezuela, and Argentina. Fifty countries have joined this international day of action, meaning the large majority of women participating will be women of color and Asian women. Are they more or less privileged than Hillary Clinton and her staff?

In the United States, too, immigrant groups, sex-worker groups, Palestinian and grassroots groups involving women of color have played a central role in the leadership and organizing of March 8 in almost every city. Our endorsers include Al Awda, Critical Resistance, the Palestine Right to Return coalition, Bay Area Sex Worker Advocacy Network, Dream Defenders, Black Lives Matter groups such as the Black Youth Project, as well as the Chicago Teachers Union, SEIU-HCII, Rutgers AAUP-AFT, UAW Local 2325, UAW Local 2865, and the SEIU lavender caucus.


The NYC rally will not feature any celebrities. It is going to be the rally of the oppressed, of the exploited, of the poor, but also the rally of small victories against capitalism, exploitation, and oppression due to the hard work, activism, and courage of women (cis and trans, of course). Immigrant, black, cis, and trans working-class women, mothers of those killed by state and police violence, and sex workers will be on the stage: the women you don’t usually see in the media and featured at big events, but who make our life on this planet possible through their work.

Are these the women whom Daum and Shaw wish to call “privileged”?

The absurdity is so apparent that the heart of the matter must lie elsewhere. March 8 is proposing a different solution to Trump and Trumpism than the one envisioned by women like Daum and Shaw.


Shaw wants us to offer “fact sheets”, suggest “language for contacting elected officials” and provide “tips for effective lobbying” as ways to “help engage women.” Her message is clear as day: She wants us to channel our anger against Trump into the coffers and bowels of the Democratic Party.