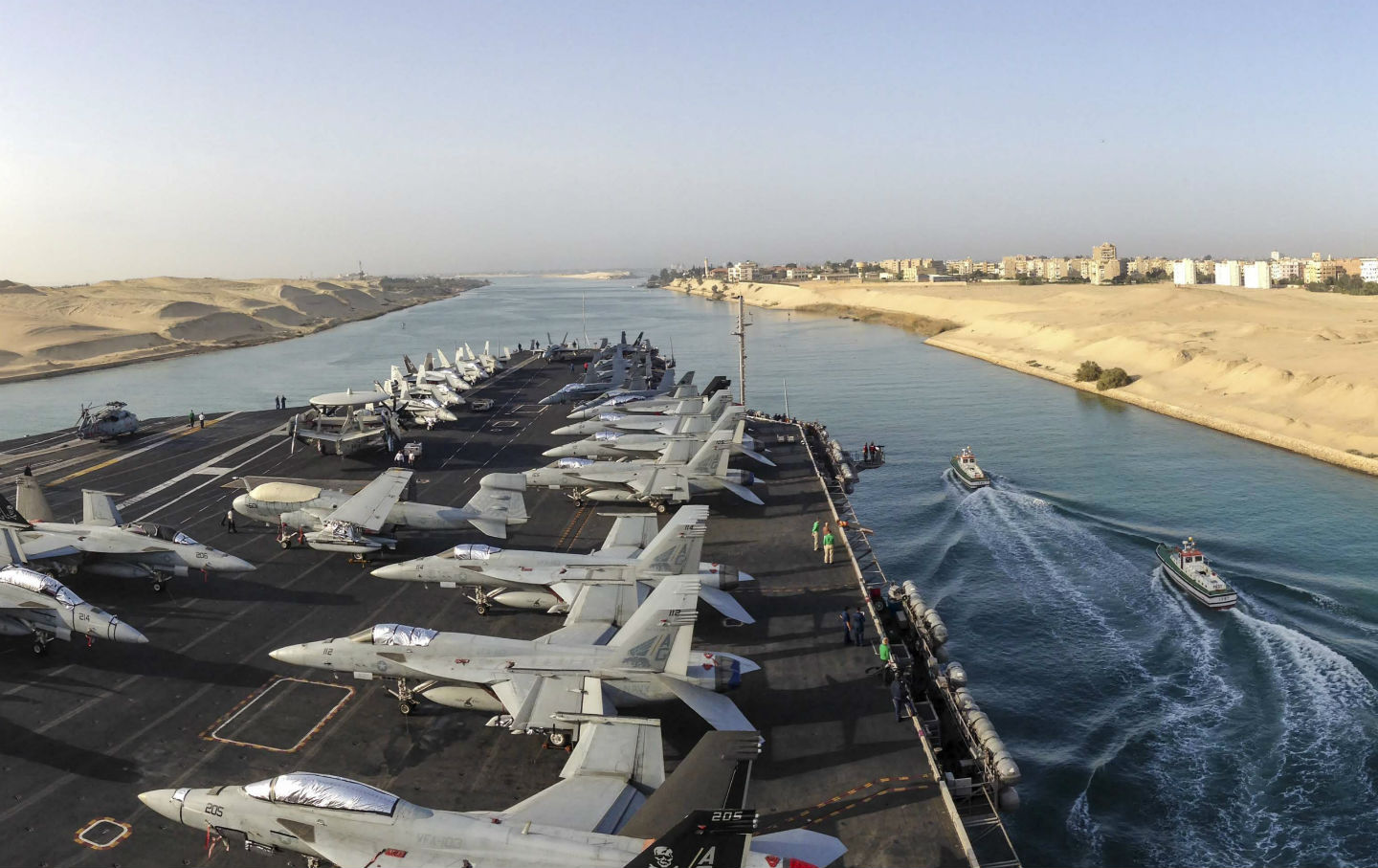 Journalist Robert D. Kaplan thinks that what is wrong with the Middle East is a lack of imperialism, and he urges that it be brought back. It is how, he says, most of the world has been ruled by “default.” This argument is so ahistorical and wrong-headed that it takes the breath away.

First of all, “imperialism” is an imprecise term. Kaplan is trying to sweep up different kinds of empire under one rubric. Until the early twentieth century, most people in the Middle East admittedly accepted the Ottoman Empire, which was Muslim-ruled and made minimal economic demands on them while offering minimal governance. But it was precisely at that point when the Ottomans began building railroads to deliver garrisons to the provinces and introducing modern, more intrusive bureaucracy that they began facing opposition from local elites like the Hashemite rulers of Mecca in the Hejaz. The rise of nationalism was also fatal to empire, whether Ottoman or any other sort.

Capitalist economic imperialism of the European sort is a new phenomenon in world history, and proved far less welcome in the Middle East than the decentralized Ottoman methods of governance. The European empires in Asia and Africa were not into it for their subjects’ health. Historians estimate that in the early nineteenth century, the colonized territories provided 15 percent of the metropole’s income, a margin that may well have helped technological and economic advances in Europe. In the late nineteenth and early twentieth century, East Indies (Indonesian) rubber and petroleum provided as much as 25 percent of the Netherlands’ gross national product. That is to say, the Dutch stole billions of dollars from the Indonesians. European imperialism was brutal.  European overlords worked plantation laborers to death. Since the foreigners were not liked, it was necessary occasionally to massacre the locals. The German army practiced with machine guns on primitively armed Namibian tribes as a prelude to the slaughter of World War I in Europe itself. Imperial archivists usually destroyed the documents that witnessed the viciousness and genocidal character of European economic imperialism.

The Middle East east of the Suez was not ruled by European capitalist imperialism for any substantial length of time, and locals kicked the imperialists out after World War II where they had not already done so before. Britain only had Iraq from 1917 until 1932; it never really controlled the country, which mounted constant uprisings that the British Royal Air Force was tasked with putting down by aerial bombardment. Bombing raids could temporarily scatter pastoral nomads or even villagers, but it could not make them submit. Sir Arthur “Bomber” Harris planned these raids; he was later involved in the firebombing of Germany during World War II. British air force officers were afraid in the 1920s that the British public would find out how Iraq was actually being dominated, and that there would be a wave of revulsion. By 1932 the British were happy enough to let Iraq go, only a decade and a half after they used British Indian troops to take it from the Ottomans. The Italians in Libya and the French in Syria lasted a bit longer, but they demonstrated the same ruthlessness and lack of interest in developing the local population. European colonialism in Egypt, Syria, and Iraq left behind almost no schools or factories.

The idea that the European armies that marched into the region offered order is laughable. They provoked revolt after revolt. They are dates local nationalists still take pride in. There was 1918–20 in Egypt, which forced the British out in 1922. There was 1920 in Iraq, which made London give up any idea of trying to run that country directly, as it did India. There was 1936–39 in Palestine and Syria. The French had to relinquish Syria and Lebanon, having, ironically enough, been weakened by being themselves colonized by Germany.

There are four big reasons for which European economic imperialism largely died after World War II, and for which it is not coming back. First, the Nazis and imperial Japan gave invading and running other countries rather a bad name. After the war, when the Netherlands attempted to reinstate its imperialism in Indonesia, the Indonesians asked them why it was so terrible for Germany to take over the Netherlands but it was all right for The Hague to dominate Indonesia. It was an irrefutable argument.

Second, the global South was increasingly mobilized. It was more urban, more literate, better armed, and more organized by political party than had been the case in the nineteenth century. European colonialism succeeded to some extent when people lived in villages of 300 and were illiterate and largely unconnected to the rest of the territory. After World War II, anti-imperialist political parties such as the Communist and Baath Parties became popular in Iraq, Syria, and Yemen. The social and political mobilization of these populations made it impossible for the colonialists to rule them. Rule requires either a helpless population or a complaisant one. Middle Easterners were neither by the 1950s.

Third, the rise of nationalism in the global South led local populations to assert ownership of national resources. Egypt got the Suez Canal back in 1956, despite enormous resistance from Britain, France, and Israel. Abdul Karim Qasim, after his 1958 coup against a British-installed monarchy in Iraq, pledged to nationalize Iraqi petroleum. Iran’s demand for a 50/50 split of petroleum profits with the Anglo-Iranian Oil Company (now BP) led to the CIA coup of 1953, but that operation could only slow and not stop history. In 1979, angry Iranians threw the United States out. Attempts at neo-imperialism most often crash and burn. In the 1970s, most Middle Eastern petroleum states nationalized this resource.

Fourth, the European publics were unwilling to bear the costs of empire, especially after the Great Depression and the devastation of World War II. Precisely because African and Asian societies were increasingly mobilized, it was more and more expensive to keep them down.

All of these four reasons for the end of empire are still salient today. Indeed, populations in the global South are far more mobilized now than in the 1950s, and powerful explosives and weaponry are more widely available. And after the 2008 crash, the patience of contemporary publics with the economic drain of imperial adventures is limited.

The Middle East is not facing state collapse because of the lack of empire. European empires themselves drew lines in the desert and instituted policies favoring minorities and dividing and ruling, which continue to haunt the region. A long-term drought has driven millions of farmers from their land in this region, a drought exacerbated by the extra heat in the atmosphere caused by climate change. Water shortages in Raqqa in Syria or Taiz in Yemen are severe, and underpin some of the social turmoil. The collapse of the socialist state after the fall of the Soviet Union and its deterioration into a rule of oligarchs under the impact of neoliberal (market fundamentalist) policies pushed by the West further destabilized these societies. The youth bulge, with hundreds of thousands of new workers trying to enter the work force annually, has presented challenges to these governments that they were unable to overcome. In any case, world regions do witness a great deal of turmoil in modern history. There was a time when Southeast Asia was in flames. It didn’t get back on track from the 1980s forward via Western neocolonialism. Indeed, the US Vietnam War had contributed to the destabilization of Laos and Cambodia.

Attempts at neo-imperialism do not look like the 1757 British conquest of Bengal, which was relatively inexpensive and pitted trained soldiers with advanced military technology against undisciplined cavalrymen firing at will. The new imperialists face mobilized, literate, organized, and wired populations perfectly willing to form guerrilla cells and blow them up. The United States did not willingly leave Iraq, it was forced out by severe opposition, both guerrilla and political (the Iraqi Parliament refused to allow US troops in the country after 2011). Kaplan and his ideological soul mates have never understood how much the occupier is hated, and how weak occupiers are in the modern world. The guerrilla insurgencies among both Sunnis and Shiites kicked off by the US occupation have grown from strength to strength, and they are now facing off against one another. The US military never controlled more of Iraq than the land on which it stood. The idea that further Western imperialism, which threw Iraq into chaos, could now miraculously bring order is the ultimate in anachronism.

The country doing best in the Middle East for now is Turkey, which was never colonized at all.