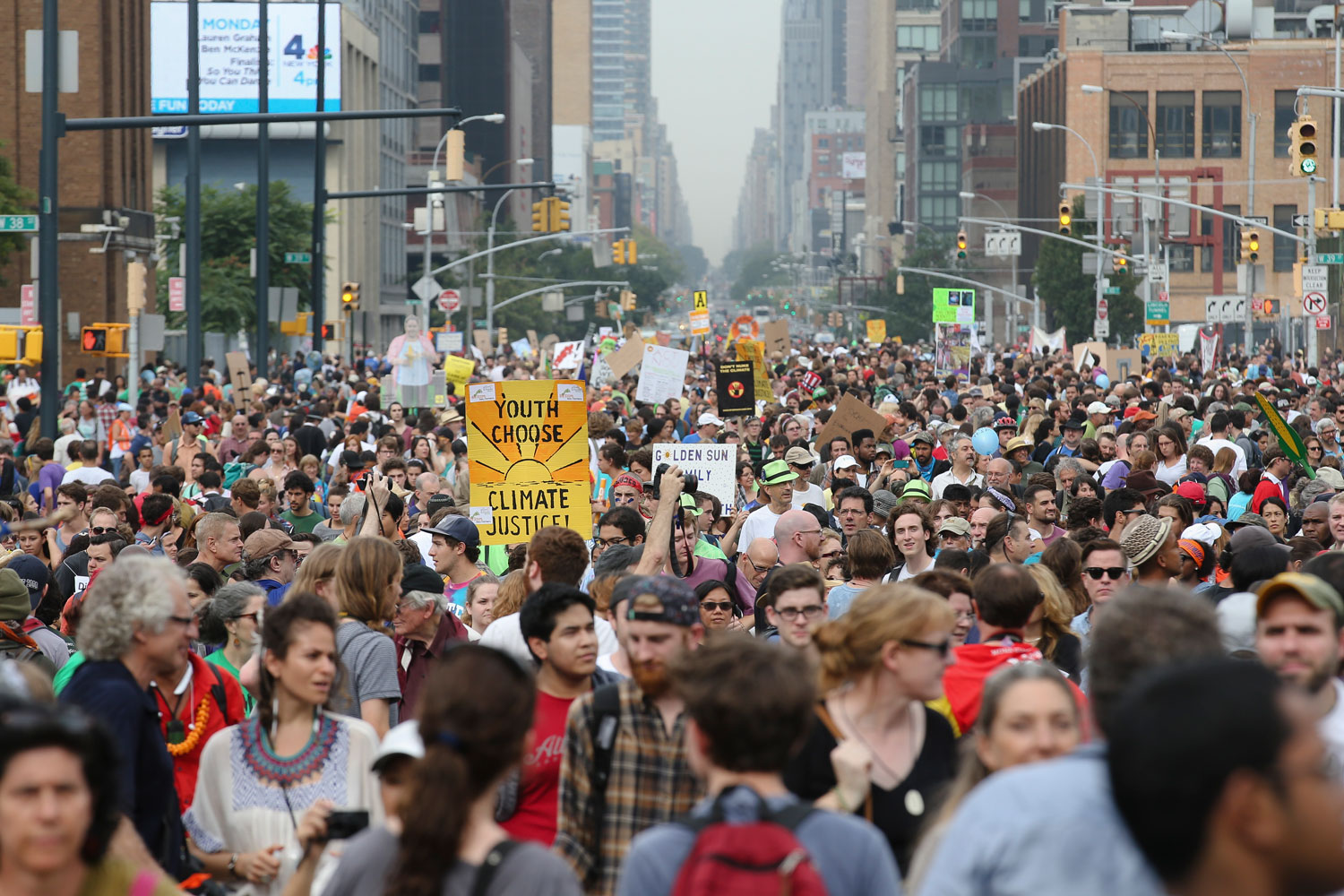 Last Sunday, we joined 400,000 people in the People’s Climate March (PCM) to demand action on climate change. The next day, we joined with 3,000 others to participate in Flood Wall Street (FWS), disrupting business as usual and naming capital as the chief culprit of climate change.

In the days leading up to these mobilizations, a few critics on the left framed a stark dichotomy between these two kinds of actions. The PCM was cast as a depoliticized, corporate-friendly sellout, in contrast to more militant direct action, which Flood Wall Street soon emerged to organize. Chris Hedges, for example, called the PCM “the last gasp of climate change liberals,” and argued that the real resistance would come afterward “from those willing to breach police barricades.” Resistance, according to Hedges, can only be effective “when we turn from a liberal agenda of reform to embrace a radical agenda of revolt.” Likewise, Arun Gupta accused PCM of spending too much money on subway advertisements and wondered how much political value a march can have when mainstream politicians and other elites felt comfortable enough to march in it.

Surely there are critiques to be made of last week’s mobilization—there is always room for improvement. But last Sunday’s march was an important step toward building a popular movement for climate justice, which, in turn, is a necessary condition for more radical actions—like the ones FWS organized. The dichotomy between the PCM and FWS is a false one. What the world saw last week in New York was a vibrant movement ecosystem in which a broad mobilization and its radical edges engaged in a critical interplay.

What Hedges overlooks is how easily direct acts of revolt can be dismissed or repressed, if they are carried out by a small number of people who are not visibly tied to a broader social base. This is why Flood Wall Street’s mobilization in relation to the PCM was so vital. To grasp this relationship requires us to shed the dichotomous thinking that pits this vs. that and us vs. them—too often extended to even our closest allies—and that limits our options to the absurdity of a multiple choice test.

Even if we are partial to the escalated tactics of Flood Wall Street, it is clear that the efforts and resources that poured into the PCM literally set the stage for a radical edge to then move further. Leading the radical edge was the Climate Justice Alliance (CJA), a collaborative of more than thirty-five community-based and movement support organizations uniting front-line communities. CJA put out a call to action that accomplished several important things. First, it inserted a deeper structural analysis into the mobilization, both naming corporate profit and power as culprit and articulating how different communities—indigenous peoples, people of color and working-class whites, for example—are disproportionately impacted. Second, CJA called for nonviolent tactical escalation. Indeed, Flood Wall Street was initiated in response to this call. Third, the call helped build Sunday’s massive march by encouraging CJA’s social bases and allies to attend the march and organize delegations. By insisting that the people who are affected by the climate crisis should be involved in the solutions, CJA positively altered the composition, framing, and narrative of the march.

Rather than position itself as an outsider in relation to the broader mobilization—which was being organized primarily by 350.org, Avaaz and the New York City Host Committee, which included a network of labor, economic and environmental justice organizations—CJA positioned itself as a left pole that pulled the larger mobilization in its direction. Later, FWS positioned itself similarly—not as “the most radical kid on the block,” but as a complementary operation that had something important to contribute to the larger effort.

Radicals who are serious about political change—and not just engaging in self-righteous sideline critique—would be wise to learn from CJA and FWS’s strategy here. CJA added capacity to the broader efforts and both groups constituted a left pole that pulled a broader base toward a more visionary direction. The Climate Justice Alliance brought perspectives, participation and leadership from frontline communities that had been lacking in the more mainstream climate movement. And Flood Wall Street brought tactical innovation, cultural creativity, smart political targeting, and a willingness to take risks.

Having the most radical-sounding solutions in the world is all for naught if those solutions are only believed by a relatively small number of self-identifying radicals. We have to engage broader social bases by meeting new participants at the on-ramps by which they initially enter into collective action. The PCM provided such an on-ramp to many thousands of newcomers. Those of us who identify with the left end of the progressive spectrum need to be honest with ourselves about our current lack of capacity for building such on-ramps on our own. If we want to move more people in a radical direction—to fundamentally reengineer the roots of a broken system—it behooves us to build and maintain good relationships with organizations that have more resources and a greater reach, even if they do not share all of our politics. The left of the left spectrum has to muster the courage and savvy to enter into alignments that are too big for us to be able to control.

The dead-end alternative is for radicals to work only with other radicals—and to remain stuck in a story of the righteous few, whose protagonists bravely fight the good fight but always lose. Part of our trouble is that we are at the end of a decades-long period of fragmentation and decline in the broad social justice left. Some on the left have become so accustomed to powerlessness that they have become attached to it. Success itself becomes suspect, and politics becomes framed only in terms of expressing values and making righteous stands—instead of as intervention in the terrain of power. Accustomed to the margins, we can have a hard time recognizing how many of our ideas have actually become popular.

This is not to say that radicals should not push. But if radicals find the plans for big marches limited and constrained, the most constructive push we can make is to plan a complement to the action that adds the things we see as lacking. This has to be done with strategy, principle and loving care; with the knowledge that autonomous actions will impact the whole mobilization, one way or another—with potentially negative outcomes. This is why Flood Wall Street insisted upon clear action agreements to guide its nonviolent civil disobedience on Monday. And this is why both CJA and FWS engaged in principled open communication with all organizational partners throughout the mobilization.

The emergent climate justice movement is stronger now because of the People’s Climate March, the Climate Justice Alliance and Flood Wall Street—and because of the overall positive interplay between these complementary efforts. Around the world a growing network of communities is embracing a multi-pronged strategy to challenge the powers that are pushing our planet to the brink. Such a strategy has to tap into a broad-and-growing base of support, and it also has to be willing to turn up the heat and disrupt business as usual. Such an alignment will, of course, be full of challenges. But these are good challenges to have. Let us lean into them together.