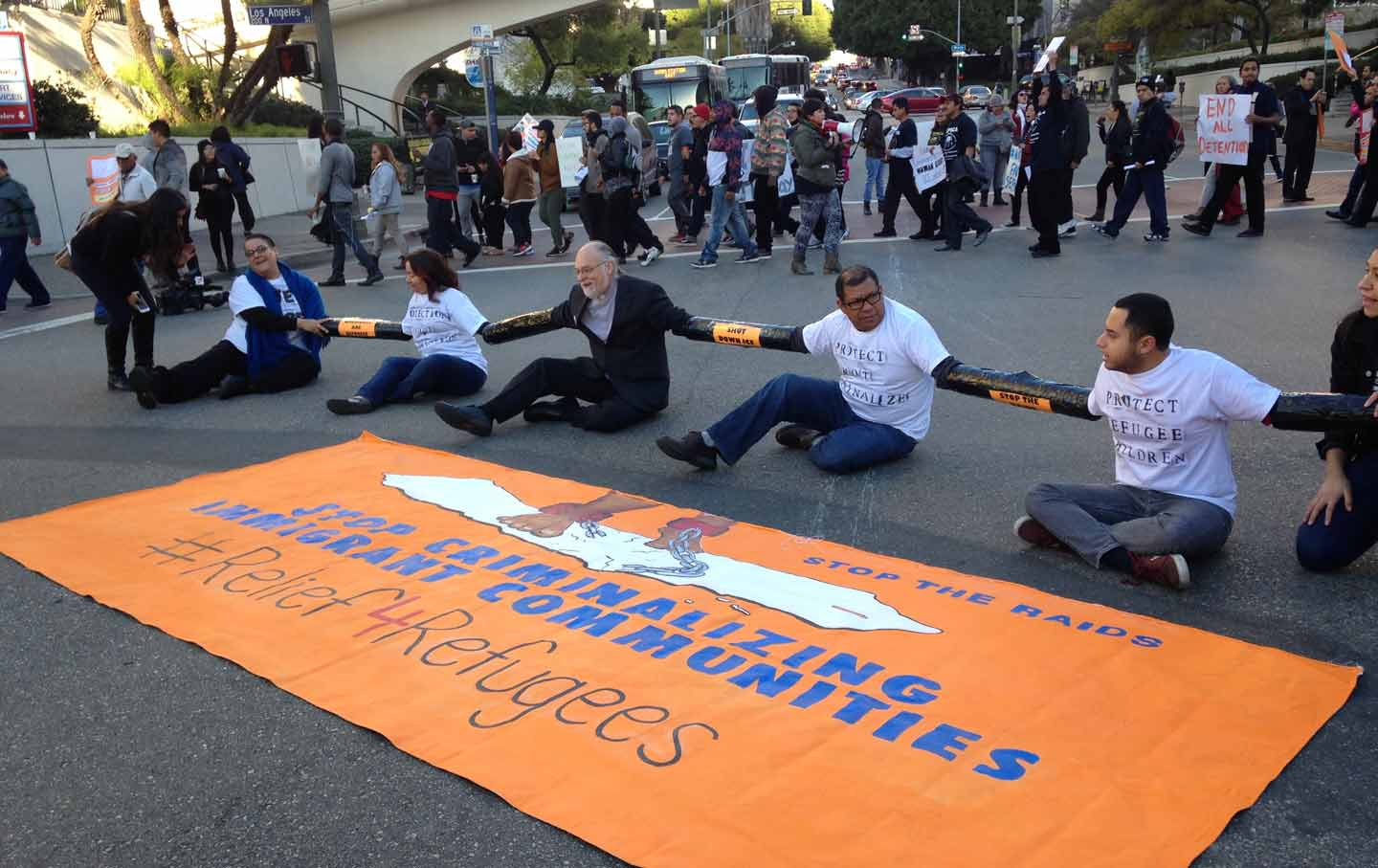 Immigration activists participate in a sit-in protest against the raids and deportation of immigrants, on Tuesday, January 26, 2016 near the downtown Los Angeles Federal Building. (AP Photo / Edwin Tamara)

Two years after tens of thousands of children and families began fleeing rampant violence in Central America for the United States, a year and a half after the ensuing media panic over their arrival triggered a militarized response from Texas, and a month after the Department of Homeland Security began raiding homes to deport those who’d supposedly lost their asylum cases, the ongoing crisis has laid bare the deepest weaknesses of the US asylum system. Chief among them is that migrants in immigration proceedings, including children, have no guarantee of legal counsel and are often forced to make their case in front of immigration judges alone.

On Thursday, Democratic senators led by minority leader Harry Reid introduced a bill to address this key gap. The “Fair Day in Court for Kids Act” would ensure that children and other “vulnerable” migrants like victims of torture or those with disabilities have access to a government attorney and legal orientation programs.

The US Has Its Own Refugee Crisis—One We Created, and Now Must Solve

“The fact is there continues to be a humanitarian crisis brewing in Central America, and that’s forcing women and children to flee El Salvador, Honduras, Guatemala, the most violent countries in the world,” Senator Bob Menendez, one of the co-authors of the bill, said on Thursday. The recent steps the United States had taken, such as expanding a modest refugee program in Central America to approve applicants’ cases before they make the dangerous trek to this country were important but insufficient. Importantly, as Menendez noted, they did not offer “full and fair access” to the asylum system for the more than 100,000 children and families who’ve already entered.

Rather, 70 percent of families and 50 percent of children face their immigration proceedings without an attorney, according to Greg Chen, the American Immigration Lawyers Association’s director of advocacy. In the last two years, about 112,000 families and unaccompanied child migrants navigated the immigration courts without legal counsel. No surprise that their cases rarely result in asylum. Among the cases initiated in fiscal years 2014 and 2015, nearly 90 percent of unaccompanied minors who received a deportation order had no attorney, according to AILA.

The bill lands amid a resurgence of children and families who are crossing into the United States to escape serious domestic violence, growing gang violence, and a ballooning homicide rate. The Border Patrol apprehended 20,455 children at the US-Mexico border between October 2015 and January 2016—a 102 percent jump from the same period of time in 2015. Border crossings had tapered after an initial spike in the summer of 2014, but have climbed back up as the homicide rate in El Salvador, for example, jumped 70 percent in 2015 over the previous year.

Nearly 90 percent of unaccompanied minors who received a deportation order had no attorney.

Under US law, those who are apprehended at the border who have a credible fear of returning to their home countries have the right to file for asylum. They must prove that they have been persecuted or have a “well-founded fear” of persecution on the basis of strict categories like race, religion, nationality, or membership in a particular social group in their home country.

“For someone who’s a bona fide asylum seeker, the single biggest factor which determines whether they’re able to secure protection is whether they have an attorney,” said Lisa Koop, the associate director of legal services and director of the asylum project at the National Immigrant Justice Center. “The evidentiary burden is significant,” Koop said, but not insurmountable when an applicant has the backing of an attorney.

VISIT CUBA WITH THE NATION!

And as if asking a child to square off in an adversarial legal environment against the government—which “is always represented by well-qualified, trained attorneys,” Menendez said—isn’t enough, the United States has undertaken other tactics to expedite the processing and deportation of recent arrivals. DHS has fast-tracked some Central American migrants’ cases through so-called “rocket dockets,” and it’s all too easy for people’s due-process rights to be neglected.

On Monday, eight families who had been held in detention for over a month after being apprehended in ICE’s enforcement action in early January were released while they await new hearings before an immigration judge. Their cases, say advocates with CARA Family Detention Pro Bono Project, reveal the problem with due process in the current system.

ICE apprehended 121 people in its holiday sweeps, which were targeted at Central Americans who had arrived after May of 2014 and who had been ordered deported. The raids focused on those who, “have exhausted appropriate legal remedies,” and had no other legal options for humanitarian relief in the United S, Homeland Security Secretary Jeh Johnson said in a statement. That is, they had no other options until immigration attorneys looked into their cases.

Attorneys with CARA, a partnership of the Catholic Immigration Legal Network, the American Immigration Lawyers Association, the Refugee and Immigrant Center for Education and Legal Services (RAICES), and the American Immigration Council, filed requests to temporarily postpone the deportations of 33 people from 12 families after learning that they had not had a meaningful chance to present their asylum claims, or weren’t aware of their right to appeal their cases.

The Board of Immigration Appeals granted the request for all 12 families.

“Only three [of the 12] families had applied for asylum and virtually all had claims of domestic violence or gang violence that would suggest there was a bona fide claim for asylum,” said Melissa Crow, legal director at the American Immigration Council. “Which of course raises the question of all the other people who were deported without having a chance to meet with us or any other lawyer.”

It also raises the question of why the United States is approaching this crisis as a standard immigration (which, in this political environment, means border-security) issue, instead of as a humanitarian and refugee issue. The raids, Secretary Johnson warned last week, are not over.

With the likelihood of more enforcement ahead, and tens of thousands of potential asylum applicants moving through the court system as tens of thousands more keep arriving on the run for their lives, broadening attorney access increasingly looks like a linchpin in the strategy to ensure people can receive protection that they’re eligible for. After all, says Mohammad Abdollahi, a spokesperson with RAICES, “if families have representation and support, they’re less likely to get a removal order, and if they don’t get a removal order they can’t be a potential raid victim.”